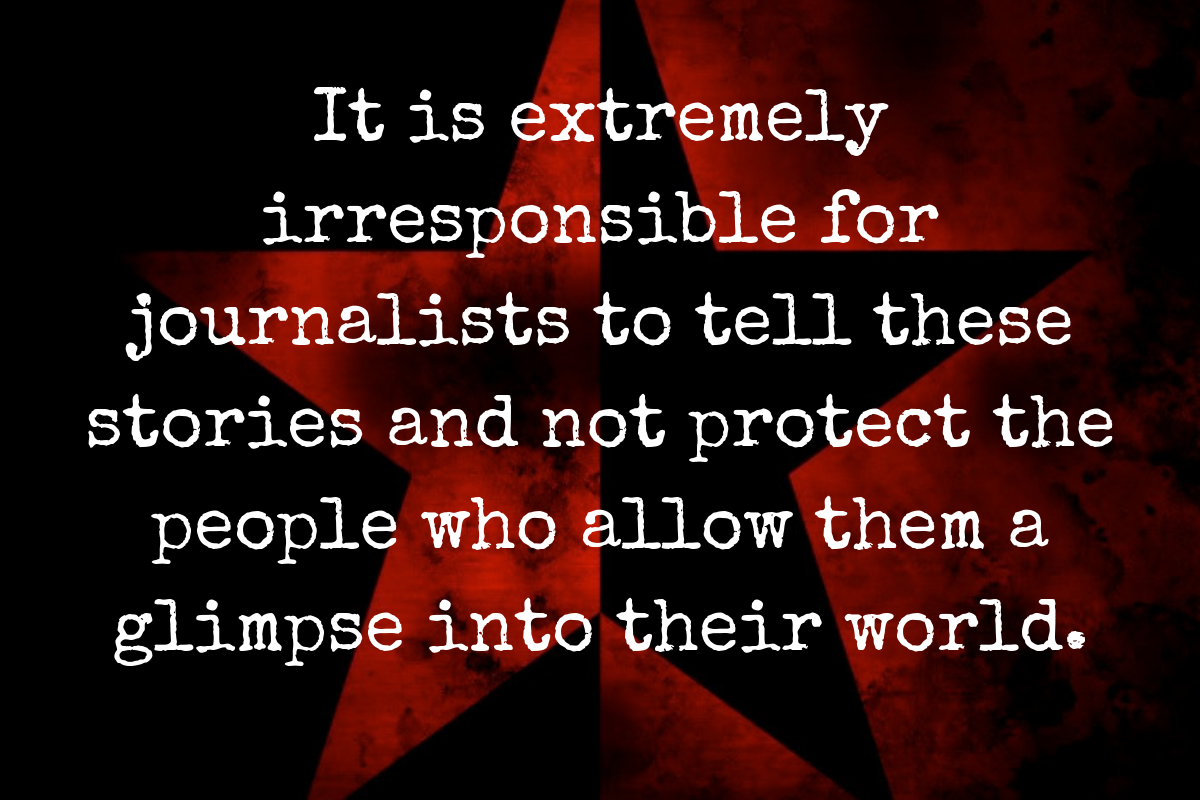 On May 4, The New York Times published an article about a community in Honduras that decided to fight against the most powerful gang in our region: The Mara Salvatrucha 13 (MS-13). The publication of this article has put the lives of the people in the community at even greater risk. They say their photos and names were published without their consent. They believe that journalist Azam Ahmed and photographer Tyler Hicks have contributed to hastening a death that has been waiting for them for years.

The neighborhood profiled is in the depths of the Rivera Hernández sector of San Pedro Sula, which is one of the most violent areas of all of Honduras. It is a place that varies between urban and rural—the streets are made of dirt, as are many of the houses. The families are very poor and the most brutal violence is that of daily life. The sector is fought over by an ever-changing number of gangs: sometimes it’s seven, sometimes six, sometimes eight. Small gangs are extinguished and new ones are born with the velocity of bullet shots.

The article tells the story of a group of boys who decided to fight against MS-13 to keep them from entering their neighborhood and the destruction that comes with it. They armed themselves as best they could and they fought. As was expected, they lost. Many were captured and others fled. In this story, Goliath vanquishes David and his body is abandoned in some ditch in Rivera Hernández.

We learn the story of the losers in great detail: real names, photos with their faces, the location of their houses, an image of the vehicle one of them uses every day for work. They even published photos of two daughters in front of a house. If the people were already a thorn in the side of MS-13, they are now a special target. One of the most important media outlets in the world reported that a group of inexperienced boys and older women were able to keep at bay the most powerful gang in Central America.

We have known some of these people since 2015, when Juan first went to San Pedro Sula for the first time to write about the city’s violence. In this community, the rules have always been clear: you don’t publish names and you don’t take photos that show people’s faces. We —both the residents and those of us who have spent years studying the dynamics in places like this— have always been aware that anything else increases the risk of being targeted for death.

One of the women from the neighborhood, whose role in the self-defense group was exposed and whose face (along with those of her children) was shown, swears she never gave permission to publish her name or her photos. She didn’t even realize when they were taken. Another resident who is featured and who had always resisted leaving his home, told me that now he too is preparing to flee the neighborhood. Me van a hacer picadillo, he says. They are going to make hamburger meat out of me.

It is extremely irresponsible for journalists to tell these stories and not protect the people who allow them a glimpse into their world. We think that these errors come from not knowing the social dynamics of this part of the world. This is an old evil, repeated again and again, of major international media companies.

Juan wrote to Ahmed to ask him about his version of events. Juan told him that we would be writing about this and asked him if the people he wrote about had given their consent to publish their names and faces. Ahmed replied in a one-line email: “HAHAHAHA.” Days later, Ahmed then said that this response was an accident. The Times has since pulled the most damaging photos from the digital version of the story.

Juan also received an email from the communications director stating that all the people had given their consent to participate in the story—that they, as always, had complied with all ethical norms.

A renowned journalist once said, “We have to treat all our sources as though they had a million dollars to sue us.” In Rivera Hernández, the Times (and too many other outlets) treats people as they are: poor Hondurans without a cent to sue anyone.

The Times is not the only outlet to do this kind of reporting. Not long ago, a filmmaker came to this same neighborhood wish promises of focusing on positive projects by community members who were trying to offer alternatives to young people.

A kidnapping and murder happened to take place while the filmmaker was present, and although he was told he could not film at those moments, he assured the nervous residents that he was recording the events only for his own collection. Sure enough, the video that aired contained exactly that footage, and painted the filmmaker like some kind of hero for spending 12 whole days in San Pedro Sula.

When the residents reached out to the filmmaker, concerned, he responded at first with patronizing messages about how he didn’t see the problem. Then he fell back on “Well, you told me I had your consent to air what I filmed.” It was only when a gringa with a lot of degrees behind her name also contacted the filmmaker and the media outlet that aired his video that they took the concerns of the community seriously. After two days of back and forth conversation, they did the right thing and removed the video altogether.

This pattern is replicated over and over again. Rivera Hernández has become a sure bet for the international media that wants to portray the savage violence of Central America.

The formula is simple: they contract local journalists, fixers, and they give them a list of things that they need to record in the few days that they will be in the city. These lists always include dead bodies, gang members —armed and tattooed if possible, but armed for sure— victims of violence, the more heart-wrenching that you can find the better, and of course a tour in a police pickup truck chasing down gang members. All of this can be found in one place: one-stop shop for gangs, guns, and murder. You only have to type “Rivera Hernández” into YouTube and you can see a long list of videos like this. Quick peeks into the savagery of the third world.

The Times article is still online. It was even translated into Spanish. The New York Times, Ahmed, and Hicks get points for having been in one of the most dangerous places in the world, and they will keep at it, maybe looking for other savage places, full of other savages, to show the U.S. public how these others live. Meanwhile, in this miserable and sweltering neighborhood, there is a group of people who live with more terror because they believe that now, after the article, MS-13 —and death— are one step closer.

Amelia Frank-Vitale is an Anthropology Doctoral Candidate at the University of Michigan. She is currently conducting dissertation research in Honduras focused on the subjectivity produced through continued engagement with cycles of migration, detention, and deportation. Based in San Pedro Sula, she works with deported and displaced youth and young adults to (re)present their experiences through interviews and participatory photography.