Guatemalans Still Risk Migration Despite Child Deaths in US

In this May 30, 2019 photo, a portrait of Wilmer Josué Ramírez Vásquez, a 2-year-old Guatemalan boy who died in U.S. custody on May 14, stands on an altar at his grandmother’s home in Tituque village, in the Olopa municipality of eastern Guatemala. (AP Photo/Moises Castillo)

CAMOTÁN, Guatemala (AP) — Flies buzzed around the drinking water and food in the home of Ericka Gutiérrez Vásquez, as her 6-year-old son, Darwin, lay bedridden with diarrhea and vomiting.

Darwin fell ill in a detention center in Mexico before the two were deported back to Guatemala recently while trying to emigrate to the United States. Once he’s better, they plan to strike out north again.

News of the deaths of five Guatemalan children in U.S. immigration custody in the last half year —including two recently from Quiquimula department, or province, where Gutiérrez lives— has reached the remote, sweltering towns and hamlets of eastern Guatemala. But it’s not dissuading people from attempting their own arduous migrations with offspring in tow, often as young as toddlers and sometimes already in delicate health.

“It’s terrifying,” Gutiérrez, 25, said of the deaths. But she’s been unable to find work even though she’s a licensed teacher, and what’s more, she has no other way to pay the $5,000 debt she took on to pay the coyote, or smuggler. Coyotes typically let migrants try again free of charge if they fail to make it the first time. “Right now he is waiting for me to tell him if I can go.”

After years of prolonged drought, crops have been devastated in what is one of Guatemala’s most impoverished regions, said by locals to be largely forgotten by the country’s authorities. The so-called dry corridor stretches across parts of 10 of Guatemala’s 22 departments and into other Central American nations, and the United Nations says at least 1.4 million there lack food security after more than half the corn and bean crops were destroyed by drought and brief but damaging storms. 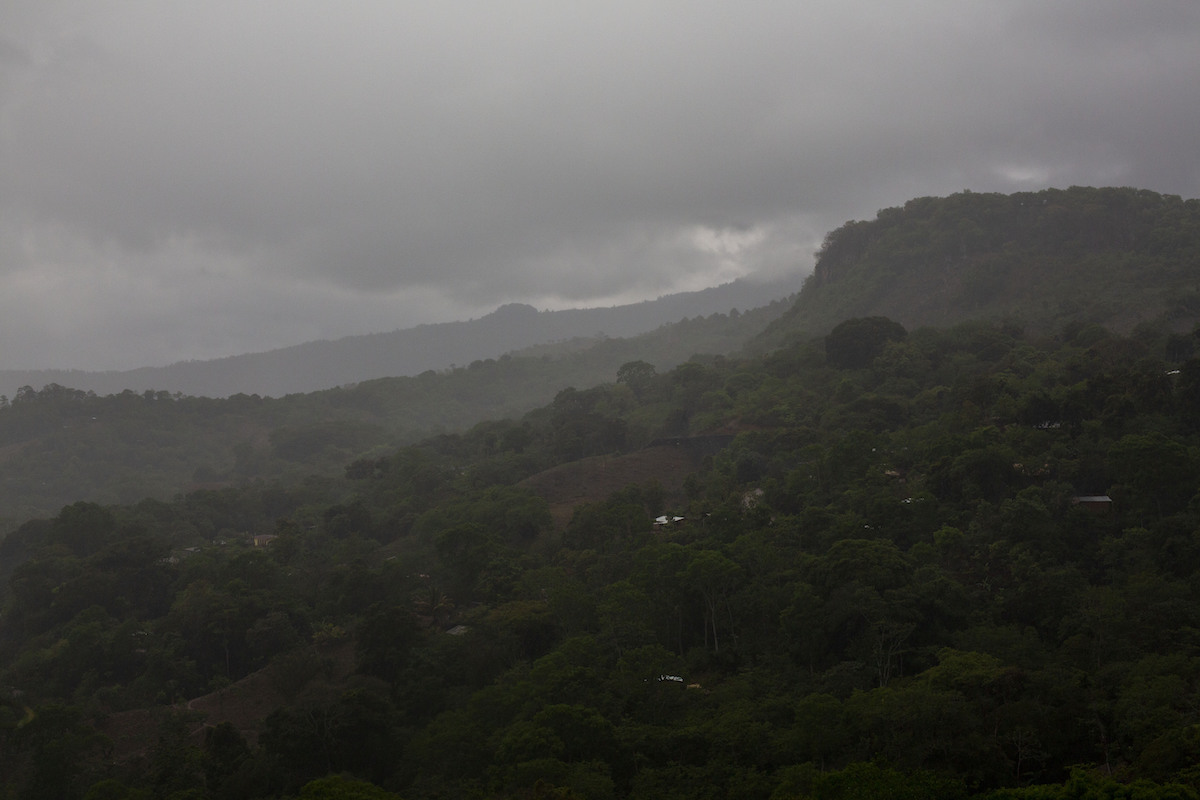 In this May 28, 2019 photo, rain falls over Tizamarte village in Guatemala’s eastern department of Chiquimula. (AP Photo/Moises Castillo)

What the area does produce is an increasing number of U.S.-bound migrants hoping for succor in the United States, despite warnings by President Donald Trump not to come, a crackdown on transmigration by Mexico and Trump’s threats to slap stiff tariffs on that country if it doesn’t do even more to discourage the flow of mostly Central American migrants.

The U.S. Border Patrol said Wednesday that it had made nearly 133,000 apprehensions at the U.S.-Mexico border in May, the highest monthly total in more than a decade. Guatemala has the highest number of people apprehended by border agents during the current U.S. government fiscal year, which began in October.

Gutiérrez and Darwin first left May 15, only to be detained two days later in Villahermosa, Mexico. By May 22, they were deported back to Guatemala. Her family doesn’t want her to try again, but her mind is made up.

And going solo isn’t an option, as the price would double: Smugglers charge those traveling with children less because they only have to get them to the border where they turn themselves in to U.S. authorities, not slip clandestinely across the frontier. And she would have fewer options once she reaches U.S. soil.

“It is easier,” Gutiérrez said matter of factly, “with the boy.”

In the nearby village of Tizamarte, Juan de León Gutiérrez, 16 and no relation, made a similar decision, seeing the only escape from misery in fleeing as an unaccompanied minor. His mother, Tránsito Gutiérrez, said the family is so poor that on some days she eats just one of the two meals she’s accustomed to.

Juan died April 30 at a Texas youth detention facility after having complained by phone to his mother of headaches and sleeplessness. According to the Nueces County medical examiner in Corpus Christi, Texas, a doctor determined he had a rare condition involving forehead swelling caused by infection in the frontal bone. 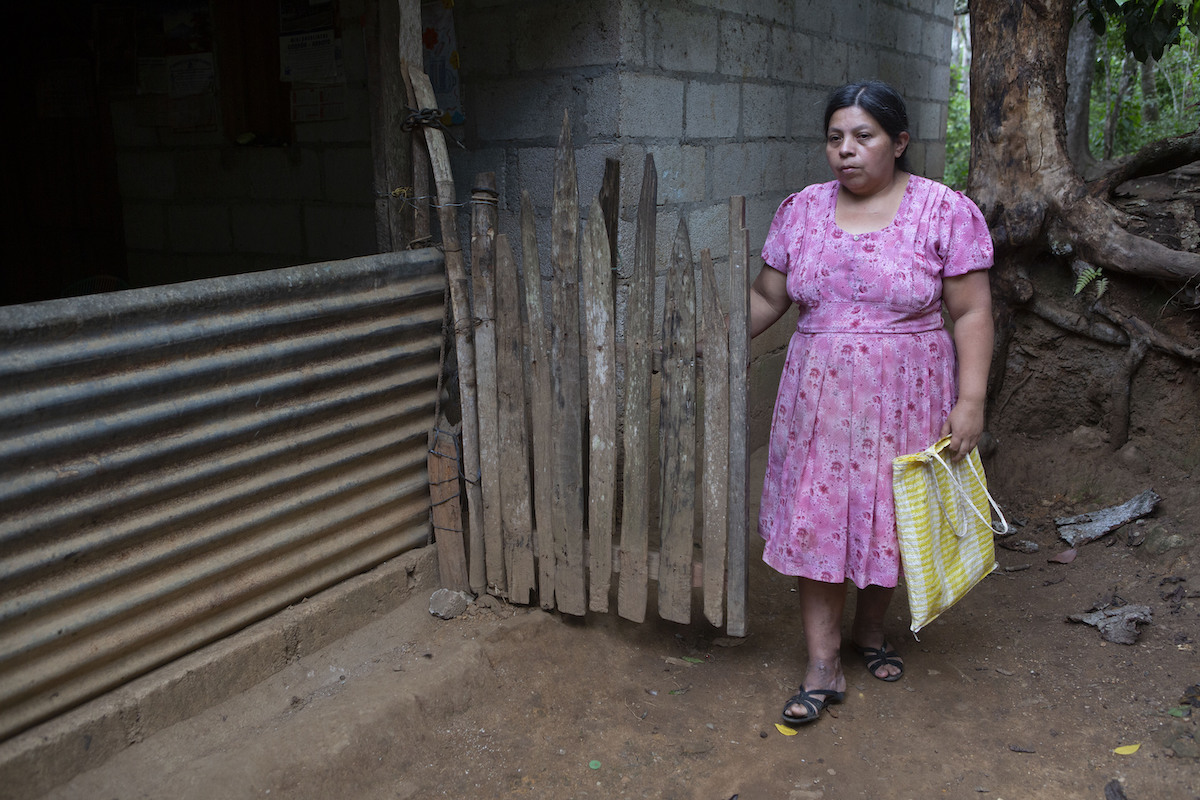 In this May 28, 2019 photo, Tránsito Gutierrez, mother of Juan de León Gutiérrez, a teenager who died on April 30 in a Texas hospital while in federal custody, stands at her home in Camotán, in Guatemala’s eastern department of Chiquimula. (AP Photo/Moises Castillo)

Days later back in Tizamarte, two neighbors, a father and his 8-year-old daughter, took off for the United States.

“They left,” said Gutiérrez, who’s on the hook for her son’s smuggler’s fee and stands to lose her, dark, humid, dirt-floor adobe home if she can’t pay. “They knew that my son had died, but they also have their needs.”

Toribio Aldana, president of Tizamarte’s Community Council, said about 100 of the village’s 1,000 people have emigrated so far this year.

“The thing is, there is no work and there is tremendous need. The price of coffee fell. For lack of rain, the corn and bean harvests dried up. They no longer even provide enough for consumption,” Aldana said, let alone to sell for income.

Guatemalan officials have distanced themselves from responsibility for child migrations.

“We are not leading these children by the hand. It is the parents who are taking these minors and exposing them in a way that we are now arriving at five deaths,” Foreign Minister Sandra Jovel said recently.

The government has provided consular support for the grieving families of dead minors and covered the cost of repatriating their bodies.

But Gutiérrez Vásquez complained that there’s practically zero assistance for families suffering in the dry corridor.

In this May 28, 2019 photo, posters of candidates for the June 16 general elections, hang on a wall of the house of Transito Gutiérrez, mother of Juan de León Gutiérrez, a teenager who died on April 30 in a Texas hospital while in federal custody, in Camotán, in Guatemala’s eastern department of Chiquimula. (AP Photo/Moises Castillo)

“Here there is no help of any kind. If you work, you eat,” she said. The problem with work: “There is none.”

Wilmer was already in delicate health before the trip north, Castillo said. Although 2 years old, he was not yet walking and unable to hold himself upright in a sitting position. Nor did he speak beyond babbling the words “papá” and “Hilda,” his mother’s name. The boy weighed just 19 pounds (8.6 kilograms) and routinely suffered from cough and fevers.

“He couldn’t even eat,” Castillo said. “We put food into his mouth but he couldn’t chew, only swallow.”

There was no money for health exams to determine why he was apparently not developing properly for his age.

Hilda and Wilmer left home in March and took 22 days to make the journey to the U.S. border. The boy became ill on the way through Mexico and crossed into the United States with a high fever and difficulty breathing. Wilmer was diagnosed with pneumonia, according to the Guatemalan consul in Del Rio, Texas, and died about a month later at a children’s hospital on May 14. An autopsy is pending.

Castillo said Hilda felt forced to leave Guatemala, where she was raising the boy without support from her ex-husband, who emigrated to Spain. She remains in the United States, free while her asylum case is pending.

Wilmer’s family had barely buried the body and was still in the middle of nine days of prayer and mourning when others in the community departed. 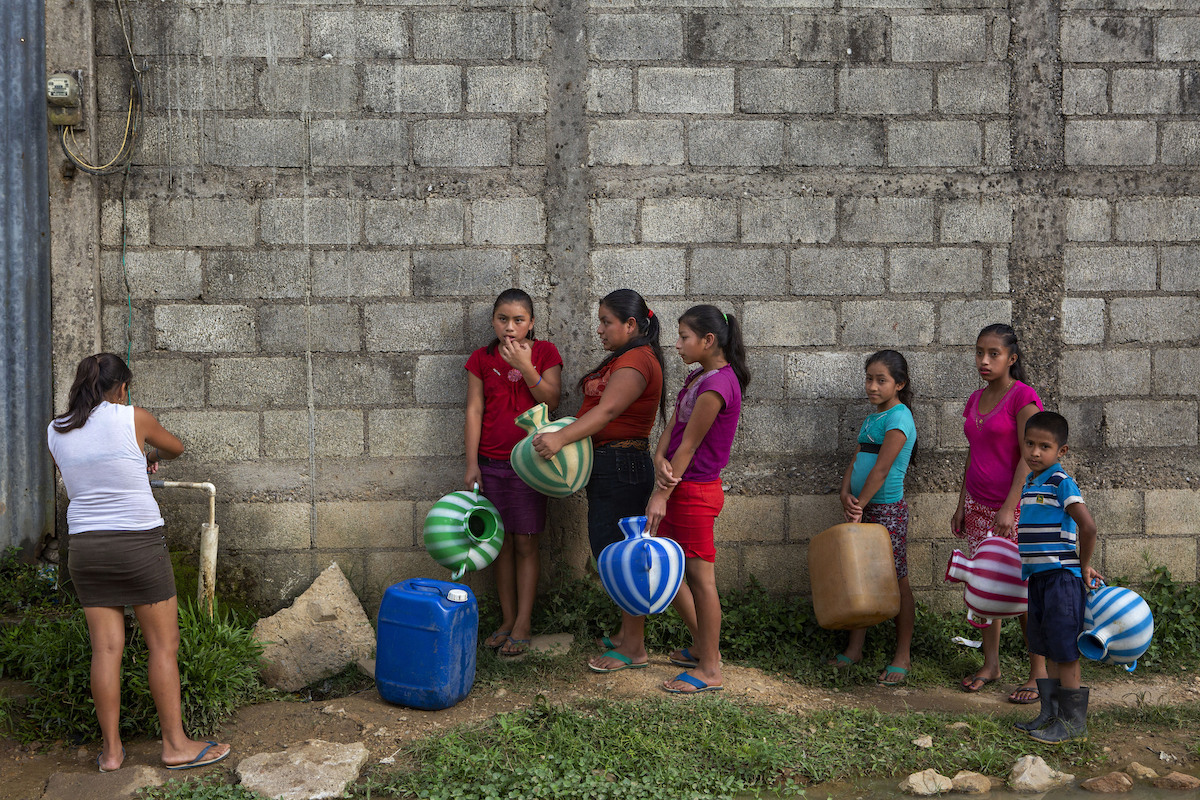 In this Tuesday, May 28, 2019 photo, women wait in line with their containers to collect water in the village of El Tesoro, in Guatemala’s eastern department of Chiquimula. (AP Photo/Moises Castillo)

“Any child that has a problem, nutritionally speaking, their immune system is deteriorated, any infectious agent can hit them more quickly,” Mazariego said. “A child with malnutrition is a perfect cocktail for acquiring any pathology.”

Mazariego said the only solution is to address root problems such as poverty, exclusion and lack of access to basic services in those communities.

Yet there’s no relief on the horizon. Experts say climate change means more extreme weather events, and Guatemala lacks the resources — and, critics say, the political will — to help impoverished communities with no paved roads or running water.

So parents and tots continue to risk the journey.

Silvia García, 25, said she misses her husband, who left for the United States two months ago with their eldest child, 5, even though the boy had a lung infection. They made it, and the son is OK.

For now she remains in Tizamarte, two blocks from where Juan de León lived, with her 1 ½-year-old baby. But as soon as her husband can scrape together another smuggler’s fee, she’ll try to join him.

“The most important thing is to be with family, and if he were to give me that opportunity I will go,” García said. “They will have a better life there, a good education for my children, good nutrition, good clothes. I think my children will be better off there than here.”