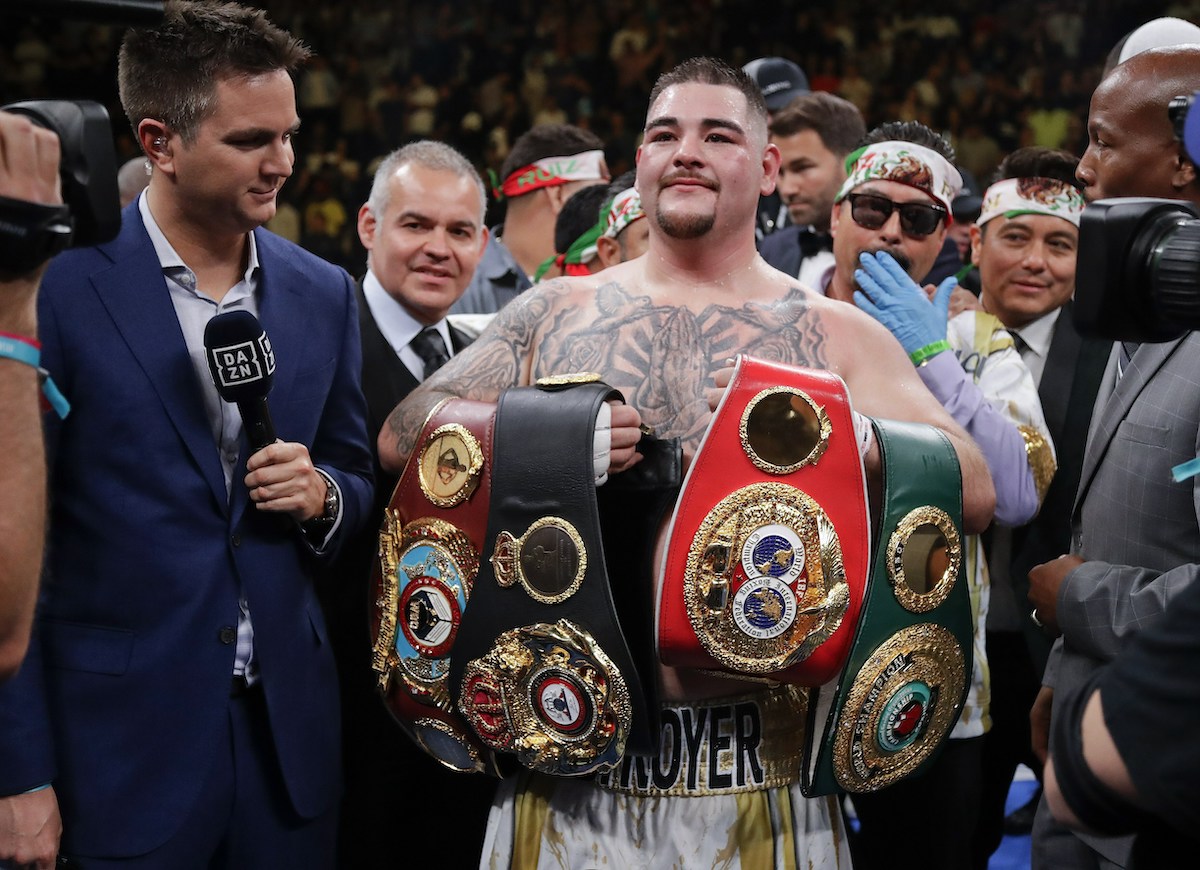 But in homes and bars across the American Southwest, Mexican Americans like Aaron and Patrick Pico in Albuquerque, New Mexico, cheered the other way —even though almost no one thought Ruiz had a legitimate shot at a title.

Then, a seventh round knockout upended boxing’s most glamorous weight class and made Ruiz, the son of immigrants raised in a U.S.-Mexico border town, an overnight folk hero among many people of Mexican ancestry in the United States.

“Something told me to watch the fight,” Pico said. “I’m glad I did. It made me so proud. He grew up similar to me.”

On social media, in gyms and at family barbeques, Mexican Americans with deep roots in boxing culture say they see themselves in Ruiz, saying his win bucks stereotypes about Latinos as well as notions about what athletes should look like. While boxing experts and sports talk show hosts ridiculed the roughly 25-1 underdog for his potbelly, Mexican Americans rallied around an athlete who was essentially unknown before he handed Joshua his first loss as a pro.

“I was shocked. I was elated,” Matt Sedillo, 37, a Mexican American poet who watched the fight in Los Angeles. “No one gave him a chance like very few people give us a chance…at anything.”

It remains to be seen if Ruiz can defend his title—and he could potentially be an underdog again when that time comes. Joshua’s promoter said a rematch clause in the contract was triggered Tuesday, setting up a potential rematch later this year. Ruiz’s camp hasn’t commented on whether Ruiz has agreed to the fight.

During his 1968 presidential campaign, Robert Kennedy repeatedly mentioned Mexican American boxers while speaking to audiences in Los Angeles. “This week, an American of Mexican descent, Raul Rojas, fights for the featherweight championship of the world,” Kennedy said after meeting with labor leader Cesar Chavez. “I wish him my best but this county must ensure that Mexican Americans do not have to bleed for a living.”

Ruiz carried all that history into the ring against Joshua, Mondragón said.

Born and raised in California’s Imperial Valley across the border from Mexicali, Mexico, Ruiz made his pride in his Mexican roots clear throughout the fight and its promotion. Before the fight started, flags representing Mexico and the United States waved from his corner. 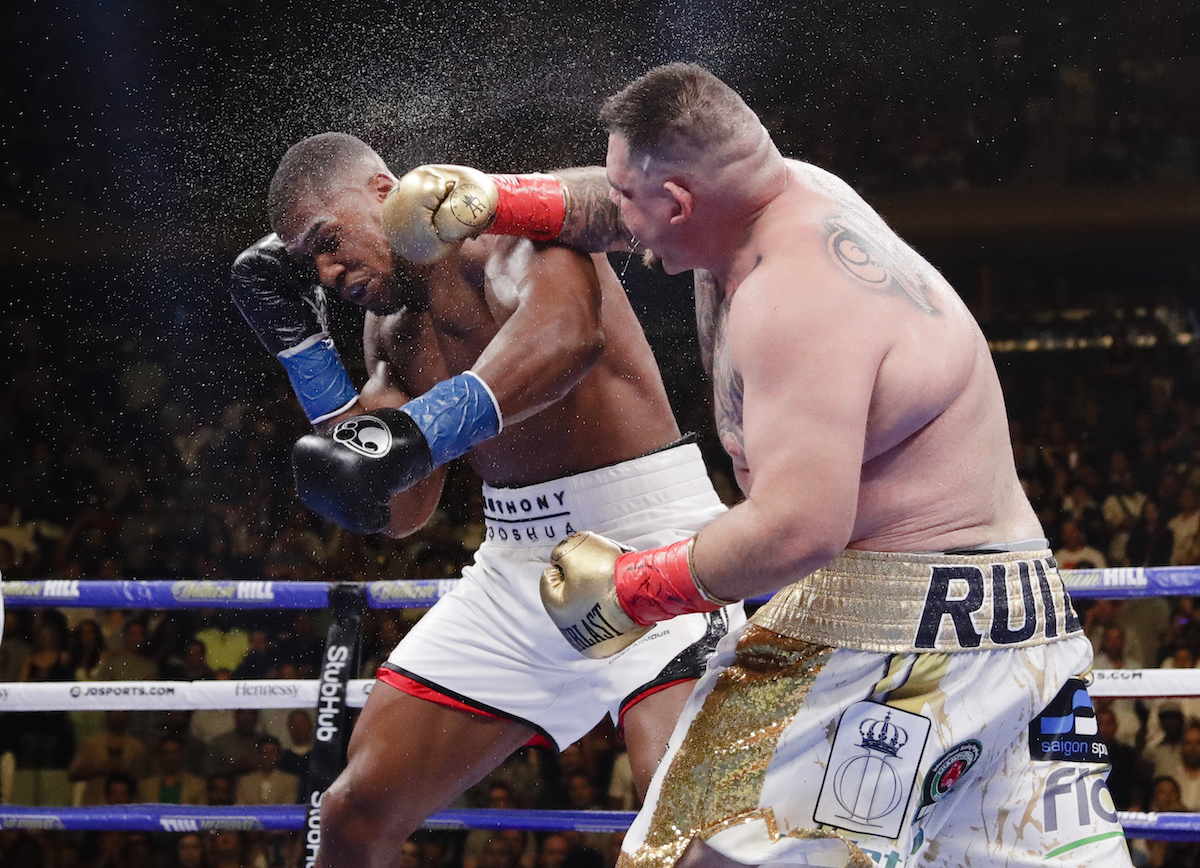 When ring announcer Michael Buffer said the names of the judges “should this fight go the distance,” the crowd chuckled at the idea Joshua would let it get there. Ruiz got the last laugh.

Ruiz’s team displayed another Mexican flag behind him as he spoke to reporters after the fight, making repeated references to his heritage, particularly when he got up after Joshua knocked him down in the third round, the first time Ruiz has ever been knocked down.

“I had to get him back, I think that’s the Mexican blood in me, the Mexican warrior that I have,” he said.

Asked in Spanish how it felt to be the first heavyweight champ of Mexican heritage, Ruiz grew even more animated.

“I don’t believe it, don’t believe I won, but I did,” he replied in Spanish. “Feel very proud, very happy. Made history. Everything is possible. Trained hard and won. I’m the first Mexican world champion.”

After his comments, #MexicanWarrior began trending worldwide on Twitter. Cartoonist Lalo Alcaraz created an image of Ruiz painted in the colors of the Mexican flag with the words: “Andy Ruiz, Jr. World Heavyweight Champion Mexican Warrior.”

Still, fans on boxing websites and sports talk shows mocked Ruiz because of his physique. Sedillo thought some of the criticisms hinted at stereotypes about Mexican Americans. “But you know what? He’s the champion. Period,” Sedillo said.

“He’s challenging Eurocentric images of beauty and fatphobia,” Mondragón said. “And if he’s ever given the chance to defend his title in Mexico, it would be epic.”

Immediately after the fight, Aaron Pico, 22, a mixed martial artist paused his celebration to think about Joshua’s loss. “I’ve been there before. I’ve been knocked down so I can identify,” said Pico, a Whittier, California, native who trains at Albuquerque’s famed Jackson Wink MMA Academy.

Then, Pico started visualizing himself as Ruiz. He was back in the gym and training two days later. At times, his eyes were closed as he shadow boxed, imagining a win similar to Ruiz at MSG.

He’ll have his chance. On June 14, the 4-2 featherweight will go up against 12-0 Hungarian-born Adam “The Kid” Borics at a Bellator card in the same arena where Ruiz made history.

“He comes from where I come from,” Pico said. “I’m motivated like never before.”

Russell Contreras and Deepti Hajela are members of The Associated Press’ race and ethnicity team. Follow Contreras on Twitter @russcontreras and Hajela @dhajela.