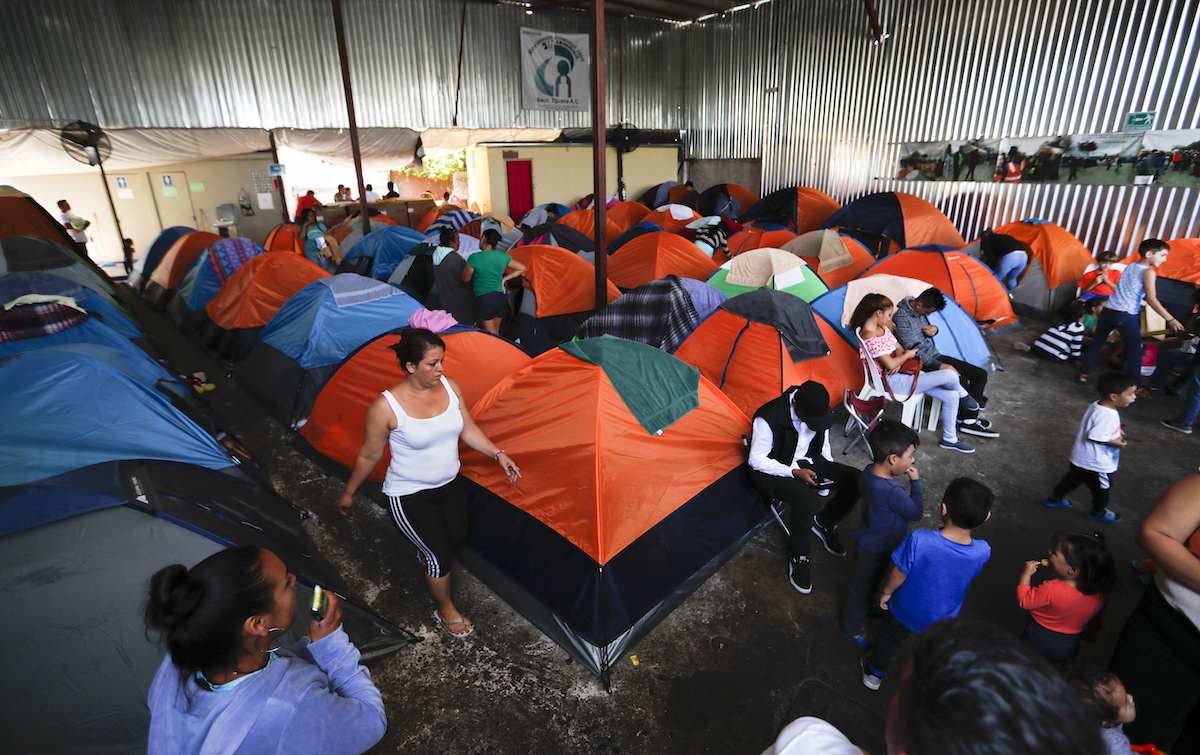 Migrants waits at a shelter of mostly Mexican and Central American migrants to begin the process of applying for asylum in Tijuana, Mexico, Sunday, June 9, 2019. (AP Photo/Eduardo Verdugo)

TIJUANA, Mexico (AP) — At the small migrant Juventud 2000 shelter near the border, a Honduran expressed disappointment Sunday over the agreement between Mexico and the United States to more aggressively to curtail migration from Central America.

But Edwin Sabillón Orellana of Honduras said he and his family will stick with their effort to seek asylum in the U.S.

Sabillón said some migrants might decide that waiting in Mexico for the lengthy processing of asylum requests isn’t worth it, but he said he cannot take his family back to their home near San Pedro Sula, a crime-ridden metropolis that is Honduras’ second biggest city.

“In my dreams I never had it in my mind to one day come to the United States,” the 30-year old assembly plant worker said, sitting near a large pot of half-made salsa ranchera awaiting a delivery of cooking gas to the shelter’s kitchen. “I had my job, my wife had her job. My daughter was in a bilingual school. My daughter speaks English. I didn’t have a reason to come here.”

That all changed in April when one of the street gangs plaguing Honduras and other Central American countries gave him a deadline of five days to begin paying a monthly extortion fee of about $120, Sabillón said. He said the gangsters thought he could pay because his daughter went to a good school, but she was on scholarship. The family earned enough only to keep food on the table and pay the utilities, he said.

Two days before the deadline, Sabillón slipped away in the middle of the night with his wife and 8-year-old daughter and left Honduras. It took them about two weeks to reach Tijuana, across the border from San Diego. They quickly crossed into the U.S. illegally near Tijuana’s beach and asked for asylum. After five days in detention, they were sent back to Tijuana at night with an appointment to return later this month.
The mechanism that allows the U.S. to send migrants seeking asylum back to Mexico to await resolution of their cases has been running in Tijuana since January. One part of Friday’s agreement between Mexico and the U.S. to head off the threat of U.S. tariffs on all imports from Mexico was an expansion of that program along the entire border.

As of last week, about 10,000 asylum seekers had been returned to Mexico, according to Mexican officials. So far the program has been operating only in California and in El Paso, Texas. It is currently being challenged in U.S. courts.

Mexico has offered opportunities for Central American migrants like Sabillón to legalize their status so they can work while waiting or if they decide to stay in Mexico. But he is not interested.

Most Mexicans are good people, he said, but some curse migrants in the street. On Saturday, he took his family to hear Mexican President Andrés Manuel López Obrador speak at a rally in downtown Tijuana. He wasn’t able to hear the president’s words about respecting migrants’ human rights because the crowd around him got worked up after a woman shouted, “Mexicans first and those from the caravan can go to …,” he said, not repeating the profanity.

People crossing into the United States (top) and a line of migrants waiting attended to apply for asylum (below) in Tijuana, Mexico, Sunday, June 9, 2019. (AP Photo/Eduardo Verdugo)

Sabillón is at least in the fortunate position of having his U.S. court date just a couple weeks away.

Nearby, at one of the city’s principal crossings to the U.S., dozens of migrants —mostly Haitians— waited in line for a number that would determine when they could cross to the U.S. to request asylum. On Sunday, U.S. border officers announced only two numbers and people who got their numbers in the past week were some 700 places away from the numbers being called, suggesting a wait of many months ahead.

Back at the Juventud 2000 shelter, Luis Torres and other parents killed time watching over the dozens of kids playing in the cramped space between tightly packed tents. The shelter, just one of many in Tijuana, is housing about 150 people, all families. Kids jumped rope and chased each other between tents.

Torres, 40, said that he and his 12-year-old son entered Texas from Reynosa, Mexico, last month. U.S. authorities then flew them to San Diego where they were detained for two weeks, he said.

Torres was confused about the status of his case, because he wasn’t sure whether he had requested asylum by signing documents that agents put in front of him without explaining. In any case he was given a date to return to the U.S. in September.

Migrants talking while waiting to be attended to apply for asylum in the United States, in Tijuana, Mexico, Sunday, June 9, 2019. (AP Photo/Eduardo Verdugo)

A carpenter, Torres said he left because his neighborhood in Honduras’ capital, Tegucigalpa, is dangerous and work is hard to come by. He sent his other four children to live with their grandmother outside the city. Torres said that he and his son did not encounter problems in Mexico during the 26 days they took to reach the U.S. border.

Torres had heard talk of the U.S.-Mexico agreement, which includes Mexico sending thousands of National Guard troops to target illegal immigration at its southern border. He said it would be better if each country stuck to its own policies rather than the U.S. pressuring Mexico to do more.

“We didn’t come so that they can play politics with us,” he said.