‘And Now We Are Alone’: Extended Family Separated at Border 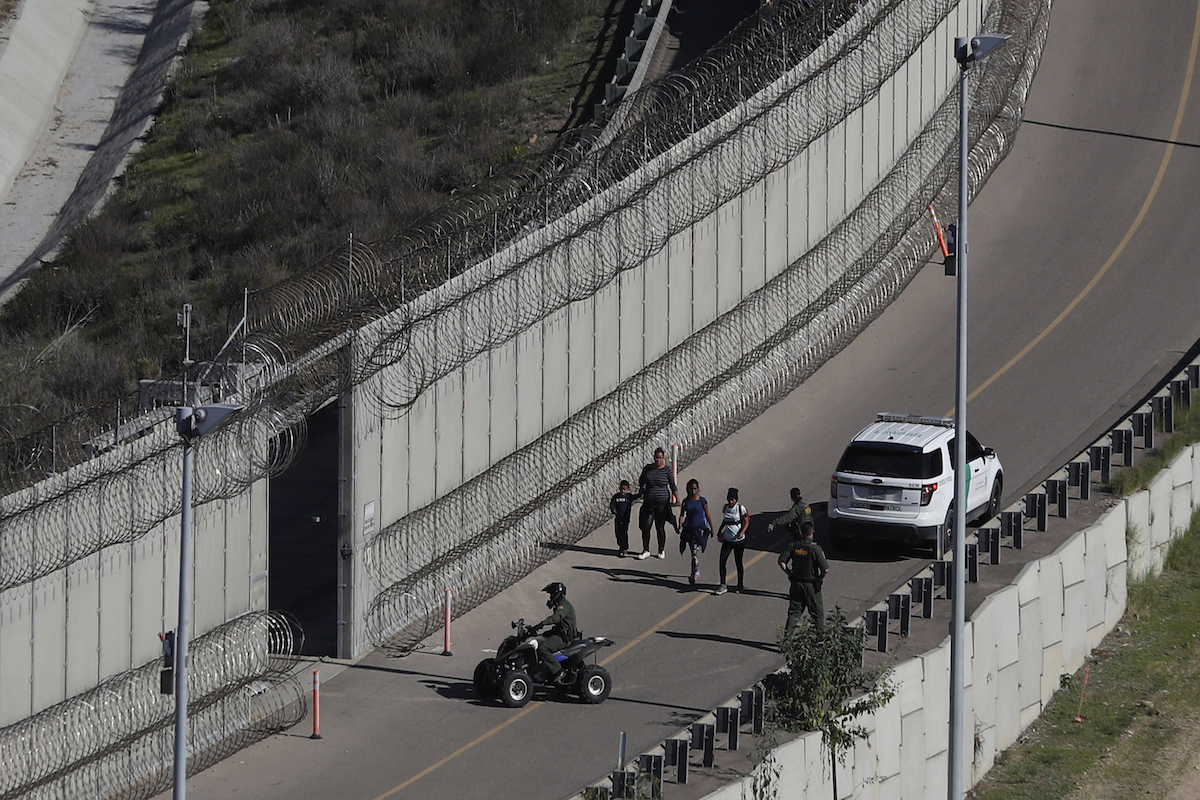 In this December 16, 2018, file photo, Honduran asylum seekers are taken into custody by U.S. Border Patrol agents after the group crossed the U.S. border wall into San Diego, Calif., in this view from Tijuana, Mexico. (AP Photo/Moisés Castillo, File)

WASHINGTON (AP) — A 12-year-old boy entered the U.S. from Mexico with his brother and uncle, fleeing violence in Guatemala, but is now without them in a packed Texas border facility. Honduran sisters, 8 and 6, were taken from their grandmother when they arrived. An 8-year-old Guatemalan boy was separated from his aunt and cousin.

One year after President Donald Trump ended his widely criticized practice of separating migrant children from their parents, his administration is again under fire for a different kind of family separation crisis—one involving extended families.

Unlike last year, when at least 2,700 children were separated from their parents under a “zero tolerance” program, these minors have been taken from aunts, uncles and grandparents under a policy meant to guard against human trafficking. This policy has been the practice for years—long before Trump became president. But the recent surge in families trying to cross the border suggests children are being separated from relatives much more frequently, and because of systemic delays, they are held without caregivers longer.

Some are being kept in the U.S. Border Patrol facility in Clint, Texas, where advocates, attorneys and lawmakers have described overcrowded, fetid conditions and children as young as infants being held for weeks.

The 8-year-old Honduran girl said in a declaration that she and her sister were taken from their grandmother “and now we are alone.”

“I have to take care of my little sister. She is very sad because she misses our mother and grandmother very much.”

Minors are supposed to be transferred from Border Patrol custody within 72 hours and are then kept at a government-run shelter until a sponsor is identified and they are released. Often sponsors are parents, aunts, uncles or siblings who have been vetted. But because of overcrowding and delays with Health and Human Services, the agency that manages the care of minors in government custody, children are kept in Border Patrol stations longer.

A report released Tuesday by Homeland Security’s inspector general found that a third of the children in Border Patrol custody in South Texas’ Rio Grande Valley had been held there longer than 72 hours. The report warned that many children had no access to showers, limited access to a change of clothes, and no hot meals in two facilities until the week inspectors arrived.

Homeland Security officials have said they are complying with the law when separating children from non-legal guardians and have grave concerns over the possibility of trafficking, but have echoed advocates’ worries about the conditions for children in border facilities not meant to detain them.

The government has not said how many children have been separated from their extended families at the border, but some data presents a window into the regularity with which it occurs. For example, of the 13,330 minors in the custody of Health and Human Services at the end of May, 1,849 were under 12 years old. Those numbers are generally constant over the past several months. Advocates say these children were likely to have come with an adult, while older teenagers were more likely to have crossed alone.

Teams from Homeland Security Investigations, under Immigration and Customs Enforcement, have been sent to the southern border to help determine cases of fraud; more than 50,000 immigrants traveling in family groups have been crossing the border each month. By comparison, last year around the same time, there were about 8,000 crossing.

Between mid-April, when investigators were sent, and June 21, they interviewed 2,124 families, identified 316 family cases as fraudulent, meaning people were posing as nuclear family members. But those numbers would include extended family who initially claimed to be parents. Of that, about 530 people, and it could be more than one adult per family unit, were referred for prosecution, ICE officials said. By comparison, from October 2017 to April 2018, Homeland Security officials said there had been about 300 cases of fraud.

Even when adults tell officials outright that they are grandparents or siblings, the children are generally separated from them unless they are legal guardians.

Under U.S. law, the children are then considered unaccompanied minors and have a legal case separate from any relatives, except their parents.

The law was developed in part because U.S. Border Patrol agents aren’t trained to determine whether someone is truly a relative and a decent caregiver or an ill-intentioned trafficker posing as one.

“I think a lot of people are struggling with, what if the situation is you have a grandmother or uncle who has effectively raised the child? That is a traumatic separation from the child,” said Jennifer Podkul, senior director for policy at Kids in Need of Defense.

Their experience can be just as traumatizing as a separation from a parent, especially if the child was raised by an aunt or uncle. That trauma can lead to mental health and physical health issues later on.

“If that child sees the person as a loving caregiver, separation can be incredibly disruptive and it threatens their health,” said Dr. Julie Linton, a pediatrician and a leader of the immigration health special interest group at the American Academy of Pediatrics.

Clara Long, senior researcher at Human Rights Watch, said she has seen immigrants sent to wait in Mexico for their asylum hearings tell the court they arrived on the border with a child and they no longer know where the child is.

In one case, a 19-year-old girl from Guatemala traveled with her 14-year-old sister. The younger girl was released to their brother in the U.S., but the older girl was returned to Mexico.

Long said laws should be changed so that immigrant children are able to stay with their primary caretaker, and that might be someone who isn’t a parent. “Sometimes it’s like I have been raised by my grandma my entire life, or my aunt, and now she has to flee,” Long said. “What they need to do is again change border enforcement so it is a humanitarian response.”