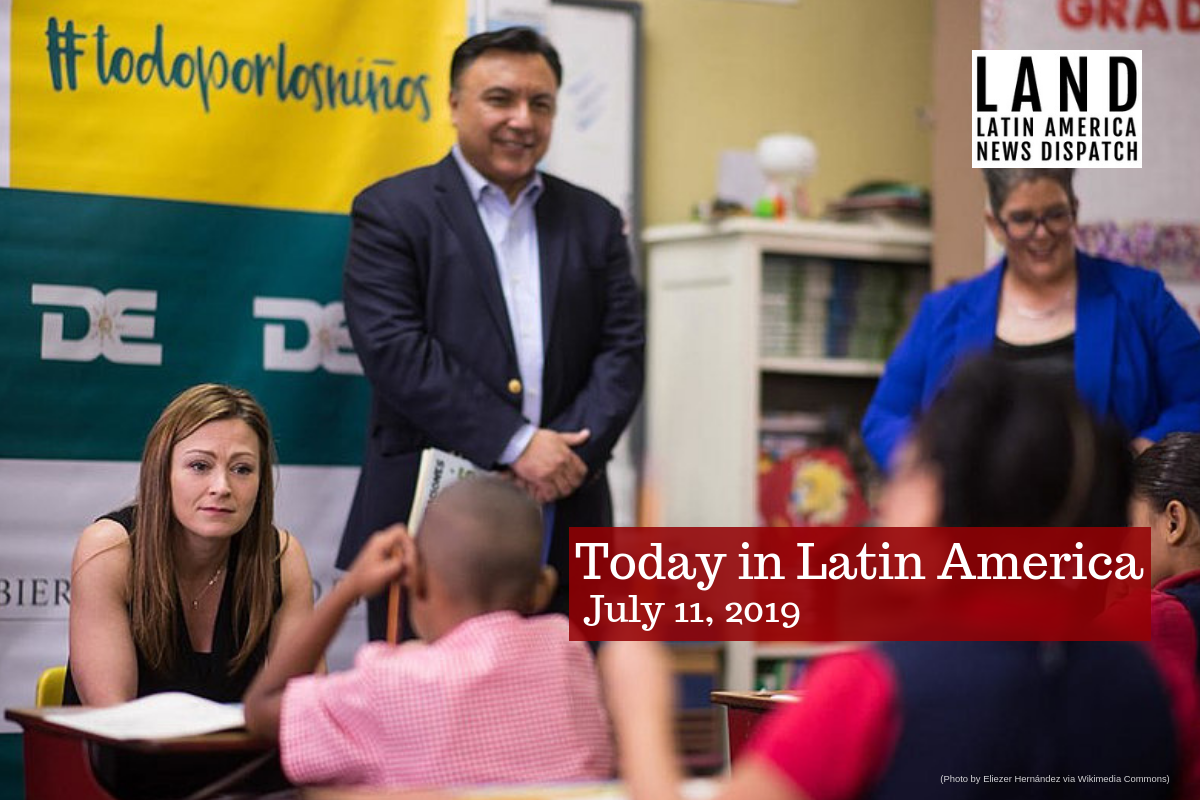 PUERTO RICO: The FBI arrested six government officials and prominent business leaders yesterday on 32 counts of money laundering and fraud, as part of an ongoing probe involving the malfeasance of $15.5 million in federal funds. Prosecutors say that former Education Secretary (DE) Julia Keleher spent $13 million in securing illicit contracts to the Ponce-Mendoza sisters, Glenda and Mayra, whom she employed as assistants and consultants at the DE.

Ángela Ávila-Marrero, the former director of the island’s Health Insurance Administration (ASES), is accused of spending $2.5 million of the funds in handing out illegal contracts. Businessmen Alberto Velázquez-Piñol and Fernando Scherrer-Caillet allegedly took advantage of ASES to win federal contracts. The FBI believes they used federal money to pay for lobbying. Scherrer-Caillet resigned yesterday from BDO Puerto Rico. Although Gov. Ricardo Rosselló is not part of the probe, many believe the corruption scandal signifies the “death” of his political career given his close relation to those implicated.

U.S.-MEXICO BORDER: A Guatemalan mother who lost her 1-year-old while she was under Immigration and Customs Enforcement (ICE) custody addressed a group of legislators yesterday. In an emotional testimony, 21-year-old Yazmín Juárez told the House Oversight and Reform subcommittee about her experience caring for baby Mariee, who died last May, six weeks after both were released from a detention facility in southern Texas. Juárez filed a wrongful death claim and demanded the U.S. government to pay $60 million in Nov. 2018.

MEXICO: A lawyer who represented prominent Mexican politicians will stand trial after being accused of creating front companies as a way to launder money from “questionable” land deals. Juan Ramón Collado, who worked with presidents Carlos Salinas de Gortari (1988-1994) and Enrique Peña Nieto (2012-2018), will be charged with organized crime and illicit association. President Andrés Manuel López Obrador said the case was filed three years ago but was dismissed given Collado’s collaboration with the Peña Nieto administration.

MEXICO: The government has asked luxury designer Louis Vuitton “to clarify” one of its latest designs, as it has raised questions over possible cultural appropriation. A letter released by the Culture Ministry on July 5 said that elements in the embroidery of the chair have elements similarities to those belonging to the culture of the town of Tenango de Doria in the state of Hidalgo. In a statement to the Associated Press, the French fashion house said that they “are currently in a relationship with artisans”  of the locality in the development of an $18,200-chair part of its Dolls by Raw Edges collection.

PUERTO RICO: Democratic presidential candidates have been invited to participate in a forum organized by the Latino Victory Fund, taking place on Nov. 6 in San Juan. Seeking to foster the political participation and representation of Latinos in all levels of American government, the organization expects to address issues of immigration, employment, and education during the debate. U.S Hispanics reached almost 60 million in 2018, a new historic high, according to a new study published by the Pew Research Center.

EL SALVADOR: A teenager who was a victim of rape and was later sentenced for aggravated murder after having a stillborn will face a re-trial next week. A Salvadoran tribunal handed 19-year-old Evelyn Beatríz Hernández 30 years in prison after the judge said that failing to seek antenatal care amounted to murder. The reopening of the case comes after the murder conviction was overturned and annulled by the country’s Supreme Court in February of this year.

HONDURAS: Three transgender women have been shot down in Honduras in the last ten days. Santiago Carvajal, a television show host, was killed on July 6 in Puerto Cortés, a town on the northern Caribbean coast. Earlier, on July 3, Antonia Laínez was shot to death in El Negrito, a municipality in the Yoro department of northern Honduras. The murder of social activist Bessy Ferrera, assassinated this last Monday, generated repudiation among many LBGTQI organizations in Honduras.

PERU: The building of a giant mining project, which would become the second-largest copper mine in the continent, has been given a “green light” by the Peruvian government. Delayed since 2010, the $1.4 billion Tía María mine contract was awarded to Southern Copper Corporation (SCCO), who plans to invest over $10 billion in the next 20 years. The unblocking of the mine would allow Perú to become one of the top three producers of the metal in the world. The permit has raised concerns as new protests are expected against the mining project, so SCCO has agreed to “gain the locals’ support” before beginning with the work.

CHILE: About 17,000 workers in Walmart’s Chilean subsidiary have begun striking against the retailer’s push for robots. The increased presence of automation at the stores prompted a walk-off organized by the Lider’s Inter-Company (SIL) workers union, who also demanded a 4 percent salary raise. After negotiations for a better work contract broke down earlier this week, around 120 out of the 375 Walmart stores closed across Chile.

BRAZIL: The lower house of Congress approved the basic text of a bill that aims to produce a major overhaul of the Brazilian pension system. President Jair Bolsonaro tweeted that the country is “close to entering the path of employment and prosperity” following the 379 to 131 vote in favor of pension reform.

Among the changes are raising the retirement age in men to 65 and in women to 62. Additionally, the reform would delay a full payout of pensions until 40 years of contributions to the system. The next vote in the lower house will take place before Congress breaks for recess next week. Experts believe that “weeks or months” remain once the reform bill reaches the Senate.