Across US, Clergy Mobilize to Support Vulnerable Migrants 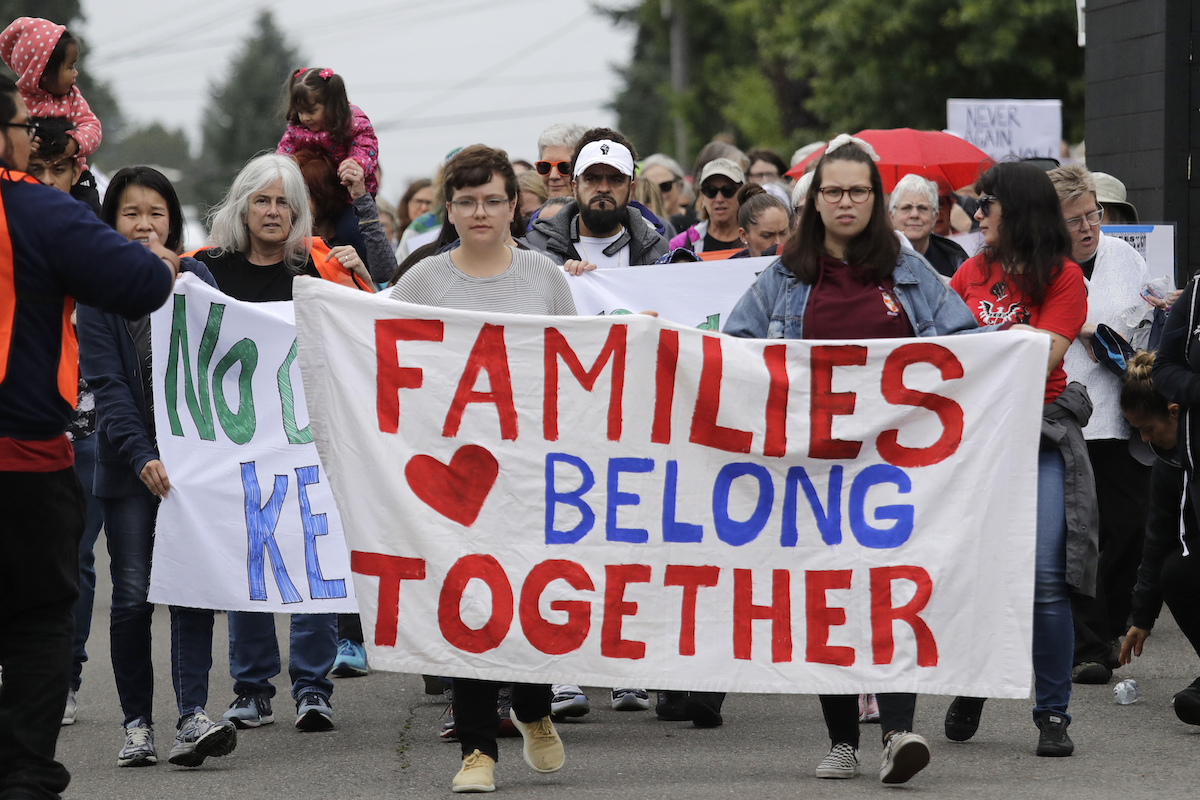 In this photo taken Wednesday, July 17, 2019, José Robles, center in white hat, walks with supporters before he presented himself to U.S. Immigration and Customs Enforcement officials in Tukwila, Wash. (AP Photo/Elaine Thompson)

So far this week, an anticipated nationwide sweep has not materialized at the expected magnitude. Yet the mere prospect of such action has prompted legions of pastors, rabbis and their congregations across the United States to stand ready to help vulnerable immigrants with offers of sanctuary and other services.

Here’s a look at some of the recent developments:

Rabbis have organized a network of more than 70 synagogues nationwide committed to supporting immigrants and asylum seekers, whether through providing sanctuary or other assistance, such as accompanying people to check-ins with immigration authorities.

Some rabbis have been arrested during a series of protests organized by Jewish activists to oppose immigration crackdowns, including a demonstration Tuesday at the headquarters of Immigration & Customs Enforcement in Washington.

The network —T’ruah: The Rabbinic Call for Human Rights headquartered in New York City— says it represents more than 2,000 rabbis and cantors.

“I’ve never seen an issue that has so mobilized the Jewish community all over the country. It’s reached a breaking point,” said T’ruah’s director of organizing, Rabbi Salem Pearce. “A lot of our families went through the things immigrants are experiencing today.”

Baltimore-based Lutheran Immigration and Refugee Service, which has been assisting uprooted people since 1939, has launched a United Sanctuaries of America campaign, seeking to recruit places of worship willing to provide sanctuary to anyone fearful of deportation without due process. LIRS also is reaching out to community organizations and nonprofits which would help ensure that sanctuary providers have needed resources such as legal assistance and logistical support.

“The response has been incredible,” said LIRS president Krish O’Mara Vignarajah. “Churches are saying they want to be part of this. Some have offered to provide safe spaces or meals. Some who have existing sanctuary spaces are now saying they need the legal services.”

ICE considers churches and some other places to be “sensitive locations” and generally does not pursue people inside who are seeking sanctuary.

In Seattle, the Gethsemane Lutheran Church provided sanctuary for more than a year for a Mexican immigrant, Jose Robles, who was targeted for deportation. On Wednesday, Robles —accompanied by his wife and three daughters, Gethsemane’s pastor, and dozens of other supporters— presented himself to an ICE office in a Seattle suburb, where he was detained after applying for a stay of deportation.

Robles’ fate is uncertain. The pastor, Joanne Engquist, said efforts would continue to get him a U-visa that would enable him to avoid deportation.

Of course, we are deeply disappointed in the outcome,” Engquist said. “What keeps us going is hope for justice.” 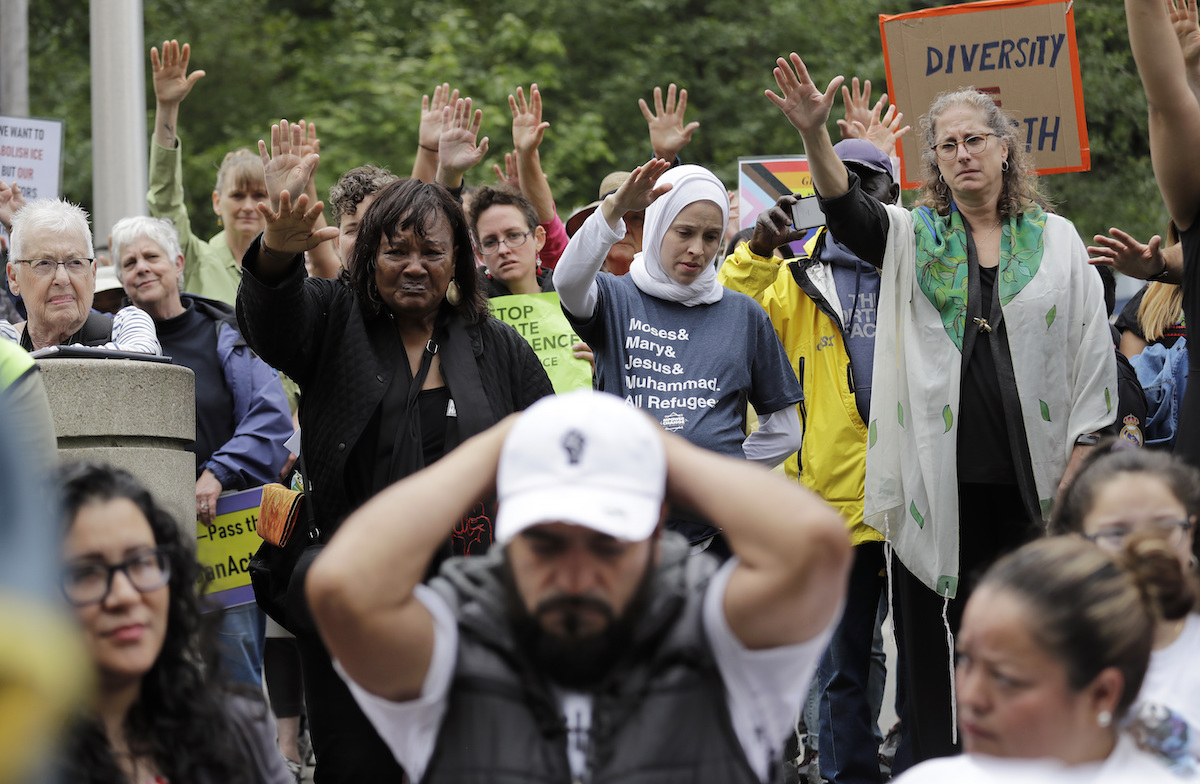 In this photo taken Wednesday, July 17, 2019, José Robles, front center, rests with his hands behind his head as supporters hold their arms toward him during a blessing before he presented himself to U.S. Immigration and Customs Enforcement officials in Tukwila, Wash. (AP Photo/Elaine Thompson)

At the Church of the Epiphany in Los Angeles, Father Tom Carey says housing people in the sanctuary is an “option of last resort.”

Carey is a member of an organization called Clergy and Laity United for Economic Justice, or CLUE, which advocates for low-income families and immigrants. Ahead of the announced raids, eight Christian congregations publicly offered their buildings as sanctuaries through the organization.

Even in his sermons, Carey takes a stance. By chance, this week’s reading was the story of the good Samaritan.

Carey’s church also connects immigrants needing legal help with an immigration lawyer who works pro bono. Of his 70 or so congregants, Carey estimates a third are in the U.S. illegally.

Pastor Robert Stearns at Living Water International Apostolic Ministries in Houston has also said his church can be a sanctuary, but his offer comes with caveats.

“The only people who will be allowed in are those who want to participate in becoming American citizens,” Stearns said.

Stearns opened his small church as a sanctuary at the request of his representative, Congresswoman Shelia Jackson Lee. If a person in the U.S. illegally approached him, he said they’d find shelter at the church but they would also have to meet with lawyers or with Jackson Lee’s staff.

He believes it would be hypocritical to preach against doing wrong and then aid someone trying to break the law.

“We’re not going to throw you to the wolves. What we’re going to do is set the attorneys in place for you if you’re willing to go through that process,” he said. “If you don’t want to do that, there’s nothing I can do for you.”

In Chicago, the diocese’s Catholic Charities has seen a noticeable decline in the number of people taking advantage of its social aid programs, spokeswoman Brigid Murphy said.

On an agency-wide call Wednesday, concerned staff soberly discussed the downtick in mothers at its Women, Infants and Children Food and Nutrition Centers and identified ways the human services arm of the diocese can help.

Murphy said the organization will try to provide more remote assistance for people afraid to leave their homes. They’ll work to educate about immigrants’ rights and provide as much legal assistance as can be discussed over the phone.

In some ways, however, they’re stymied: food can’t be distributed by phone.

“Depending on how long this environment continues, we’ll be looking at the best ways to serve people in need while staying within the bounds of the law,” Murphy said. “But I don’t know that we’ve come up with an answer to that yet.”

Utah’s dominant religious denomination, the Church of Jesus Christ of Latter-day Saints, doesn’t offer sanctuary to immigrants, but it tries to stake out a compassionate stance on immigration and said last year it was “deeply troubled” by the family separations at the border.

Members of the faith, widely known as the Mormon church, account for a large portion of the volunteers who help immigrant and refugee resettlement programs run by Catholic Community Services of Utah.

Said spokeswoman Danielle Stamos, “They’re help is really critical to what we do.”