On a colonial plaza behind the governor’s mansion, a small group of men and women laid out the shoes of people who died in the aftermath of Hurricane Maria, each decorated with a blue flower.

The shoes were first laid out on the steps of the U.S. territory’s capitol last year as a protest against government refusal to acknowledge the premature deaths of thousands of people due to the damage wrought by the September 2017 storm. On Thursday, less than 12 hours after the island’s largest public protest in years, the shoes became part of a far-flung effort to forge a sustainable protest movement to turn Rosselló out of office. 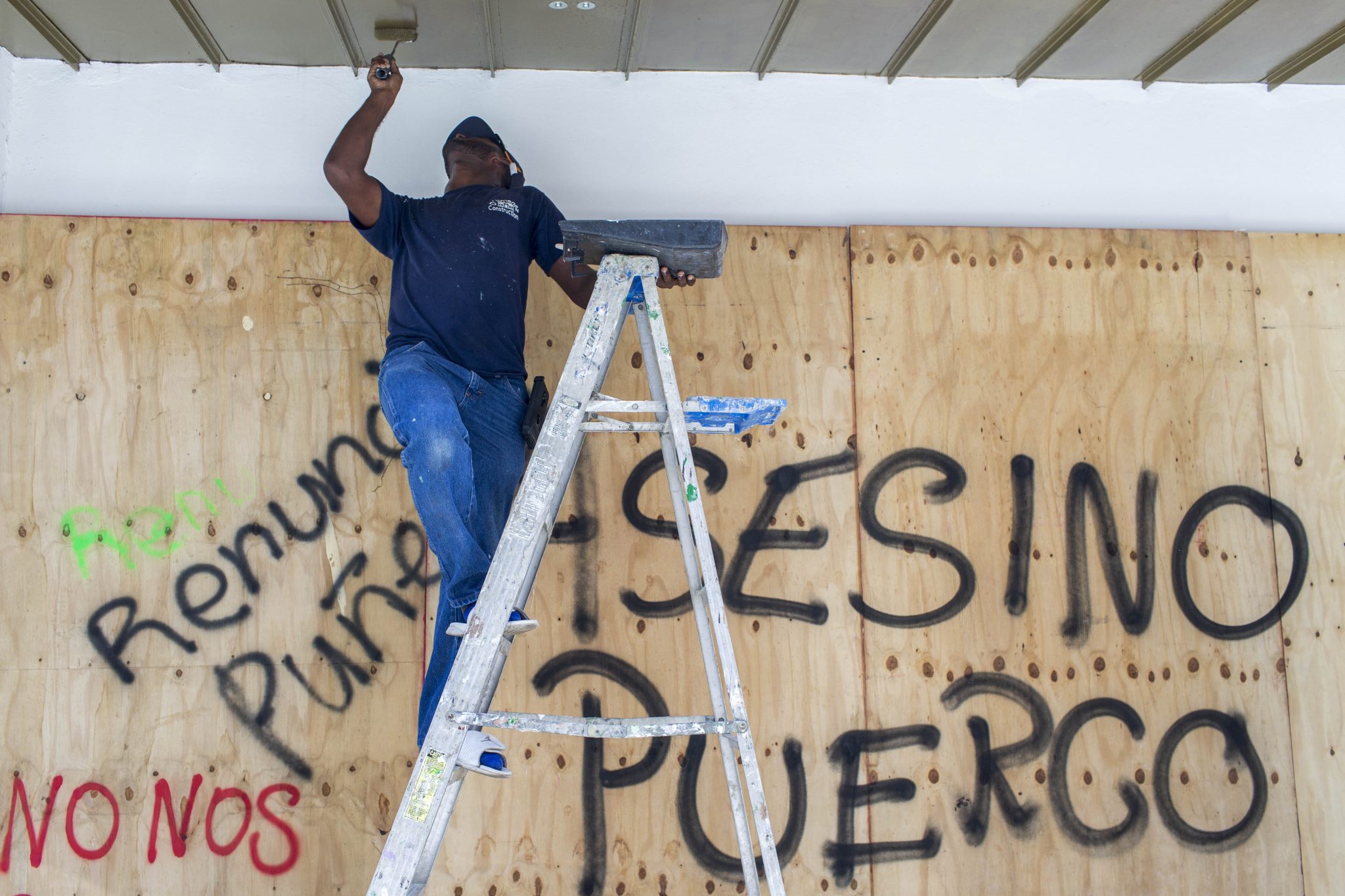 A man paints outside a store that was boarded up to prevent damage amid protests in San Juan, Puerto Rico, Thursday, July 18, 2019. (AP Photo/Dennis M. Rivera Pichardo)

The spark was the leak of hundreds of pages of online chats of the governor and his aides slinging vulgar jokes and insults about women, gays and even the dead from Hurricane María. But the kindling for this week’s two large protests against Rosselló, participants say, was years of mismanagement, corruption and cutbacks, including the closure of hundreds of schools and the collapse of the electric grid after María.

“Rosselló represents something, a corrupt system. A system that laughs at the living, that laughs at the dead,” said Kique Cubera Garcia, a 41-year-old documentary maker who was helping lay out shoes. “Ricardo Rosselló is the straw that broke the camel’s back. We’re going to throw him out.” 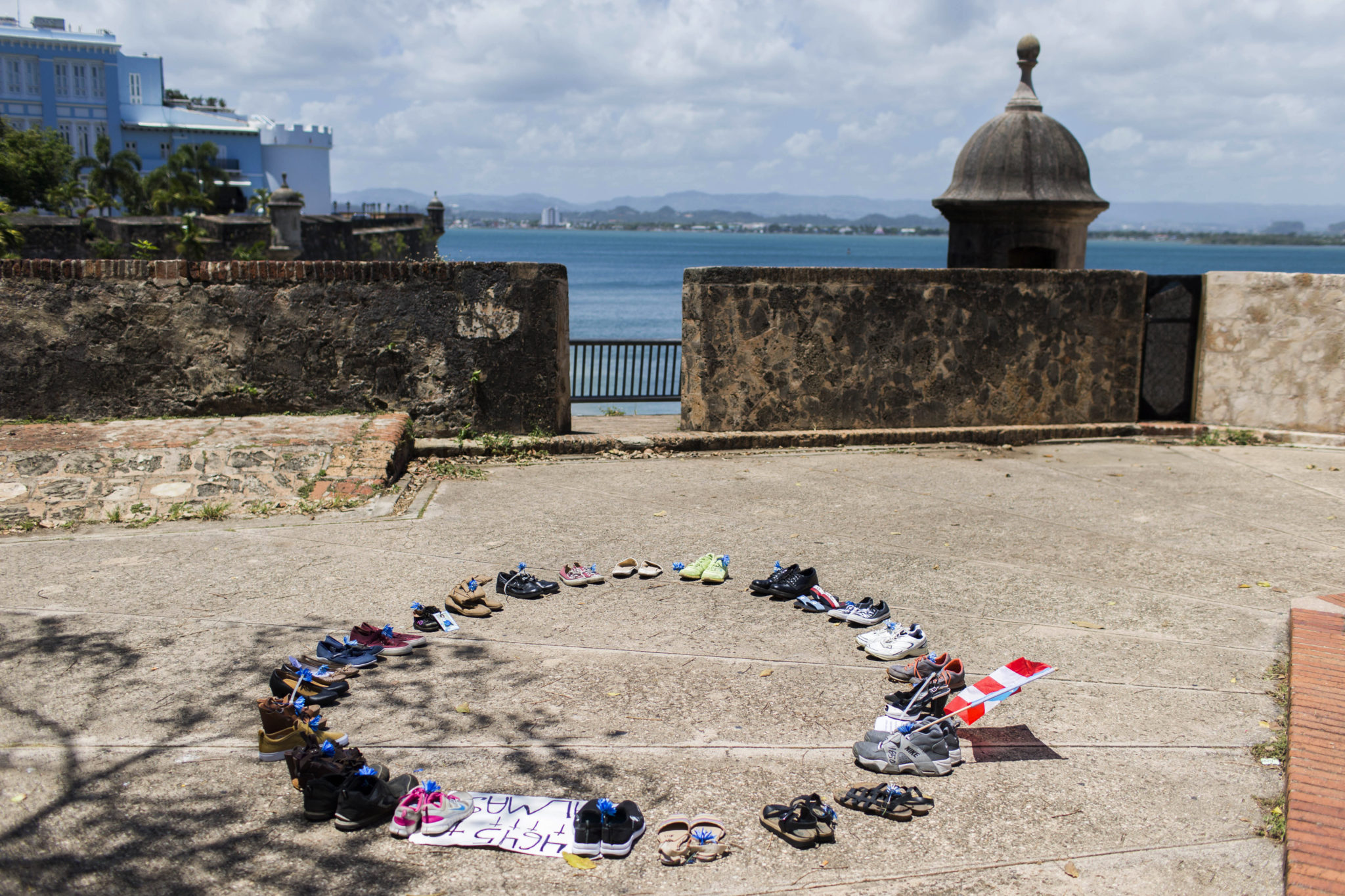 Shoes representing people who died during Hurricane María and its aftermath sit in a circle after being placed by protesters in La Rogativa Plaza in San Juan, Puerto Rico.  (AP Photo/Dennis M. Rivera Pichardo)

Despite that assurance from Cubera and many other furious Puerto Ricans, it remained far from certain that the anti-Rosselló forces would be able to forge a strong and long-lasting movement able to force the 40-year-old governor from power. Rosselló’s pro-statehood party holds both houses of the territory’s legislature and officials have said they do not intend to start impeachment proceedings for now.

“I’m committed, more strongly than ever, to move ahead with the public policies that we’ve worked for so hard in all areas of the government,” Rosselló said in a written statement Thursday morning. “I strongly believe that it’s possible to restore confidence and that we’ll be able to reconcile after this painful and sad process.”

Meanwhile, President Donald Trump weighed in on the upheaval in Puerto Rico, tweeted harsh words for the territory’s leadership a day after tens of thousands protested against the governor. Trump focused more on one of Rosselló’s main antagonists than the governor himself, however.

“A lot of bad things are happening in Puerto Rico,” Trump tweeted, adding that “The Governor is under siege” and deriding San Juan Mayor Carmen Yulín Cruz, a frequent critic of both the president and Rosselló, as “a despicable and incompetent person who I wouldn’t trust under any circumstance.”

A lot of bad things are happening in Puerto Rico. The Governor is under siege, the Mayor of San Juan is a despicable and incompetent person who I wouldn’t trust under any circumstance, and the United States Congress foolishly gave 92 Billion Dollars for hurricane relief, much….

He alleged that much of relief funding approved by Congress after 2017’s devastating Hurricane Maria “was squandered away or wasted, never to be seen again,” and said “much of (Puerto Rico’s) leadership is corrupt, & robbing the U.S. Government blind!”

The mayor responded on Facebook, saying “I understand you are unwilling and unable to understand DIGNITY when it hits you straight on. I also understand you cannot condemn corrupt, misogynistic, homophobic, and abusive behavior. After all, if you did, you would be passing judgement (sic) on yourself.”

The U.S. island is struggling to emerge from a debt-driven financial failure and a recession that’s over a decade old. It also seeks more federal aid to recover from Maria, which devastated Puerto Rico’s electrical grid and from a months-long failure to provide care to the elderly and medically vulnerable. 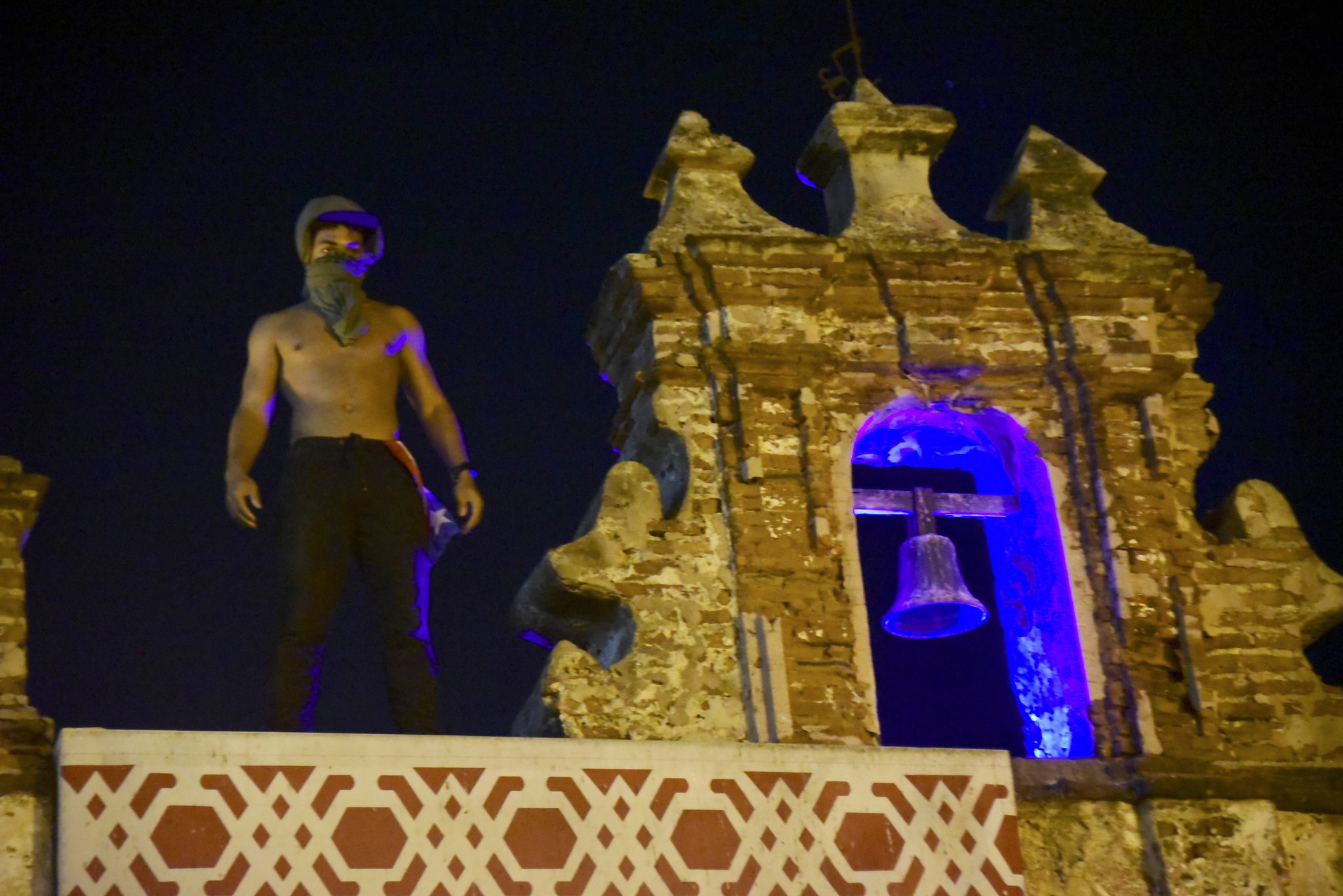 A demonstrator stands on the roof of a building during clashes in San Juan, Puerto Rico, Wednesday, July 17, 2019. (AP Photo /Carlos Giusti)

Some of Puerto Rico’s best-known celebrities —performers Ricky Martin, Residente and Bad Bunny— joined Wednesday’s march through San Juan, some waving Puerto Rican flags printed in black and gray instead of the usual red, white and blue to express their discontent.

Prominent Puerto Ricans on the U.S. mainland such as Lin-Manuel Miranda of “Hamilton” fame and Boston Red Sox manager Alex Cora joined the chorus of voices calling call for resignation. 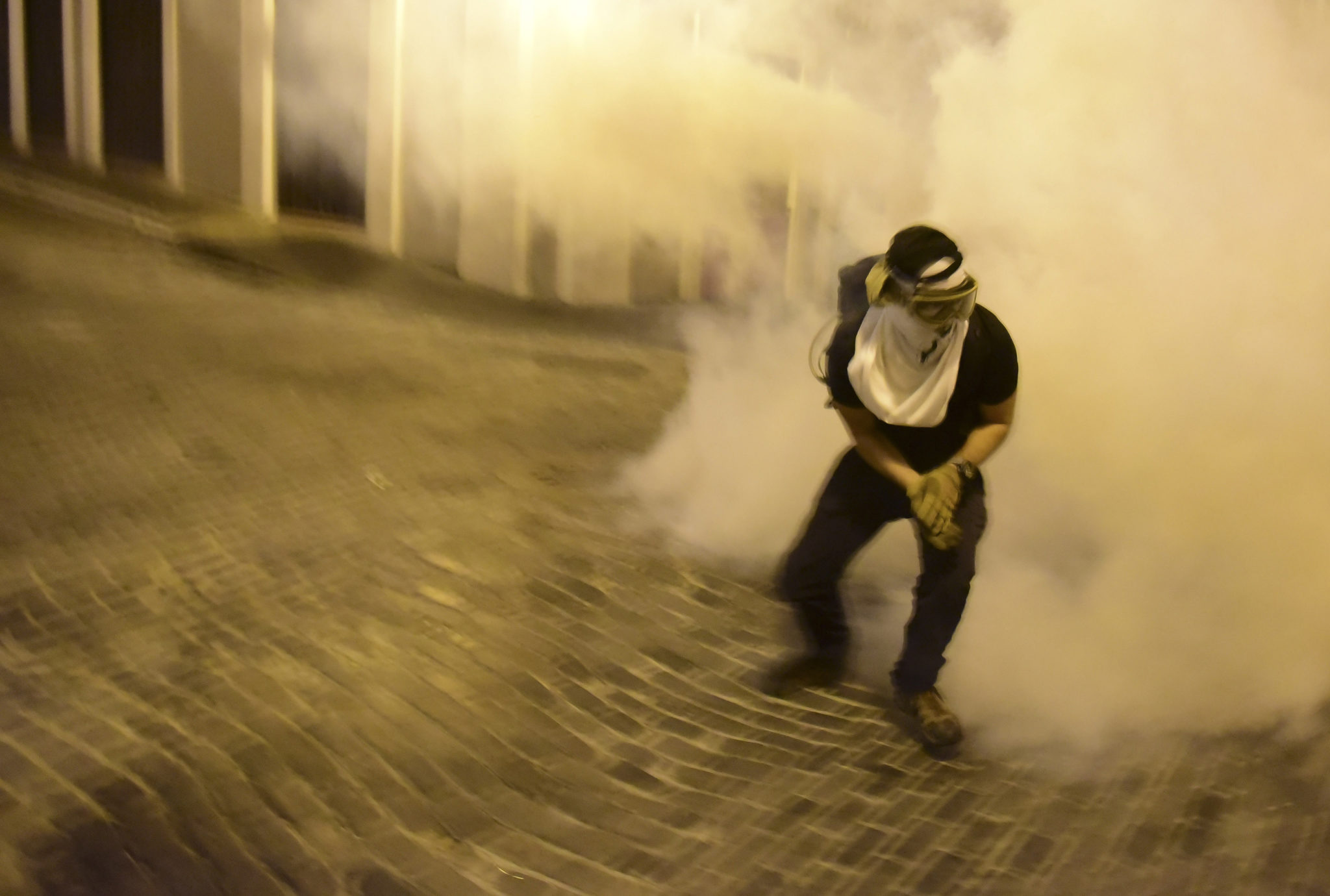 Smaller protests have taken place around the island, with some Puerto Ricans taking down portraits of Rosselló from government offices.

“The country is starting to make its voice heard in new ways,” said artists Gloribel Delgado Esquilin, who was helping lay shoes on the Old San Juan plaza. “There’s no way of predicting what’s going to happen here.”

There were more menacing signs of unrest, as well: Puerto Rico’s police department said dozens of pistols and rifles were stolen from a police station in the town of Guayama Wednesday night.

Escalera said a message threatening Gov. Ricardo Rosselló was found on a wall of the storage room.

The island’s largest public employees’ unions called for a third march on Friday evening from Old San Juan’s cruise-ship piers to the governor’s residence, saying they, too, are a confident that a new governor is only a matter of time.

“He will have to leave because the protests will just keep growing,” said Angel Figueroa Jaramillo, head of the union representing many of the employees of the island’s public power authority. Rosselló has proposed privatizing the authority, which collapsed in the storm due to decades of poor maintenance and neglect.