Bernie Sanders Hosted a Roundtable Discussion in LA for POC Media: Here’s What He Had to Say

LOS ANGELES — On July 26, Senator and Democratic presidential nominee Bernie Sanders met with members of POC media organizations to discuss issues and needs of different ethnic groups. The round table was intimate, allowing space for those present to ask questions after an opening statement.

“Mostly I am here to listen. I am more than aware that L.A. is incredibly diverse,” Sanders said in his remarks. “We are all aware that we are dealing with the President of the United States who practically is a racist, a religious bigot and a xenophobic who wants to divide us up based on where we came from and on the color of our skin. My job as president would be to move the country in the opposite direction.”

During his opening statement and throughout the conversation, Sanders spoke of the disparity of medication costs in the U.S. in comparison to other countries, using Canada as an example. “This weekend, I’m taking a busload of people who suffer from diabetes to Canada to buy insulin at one-tenth of the cost,” he said. 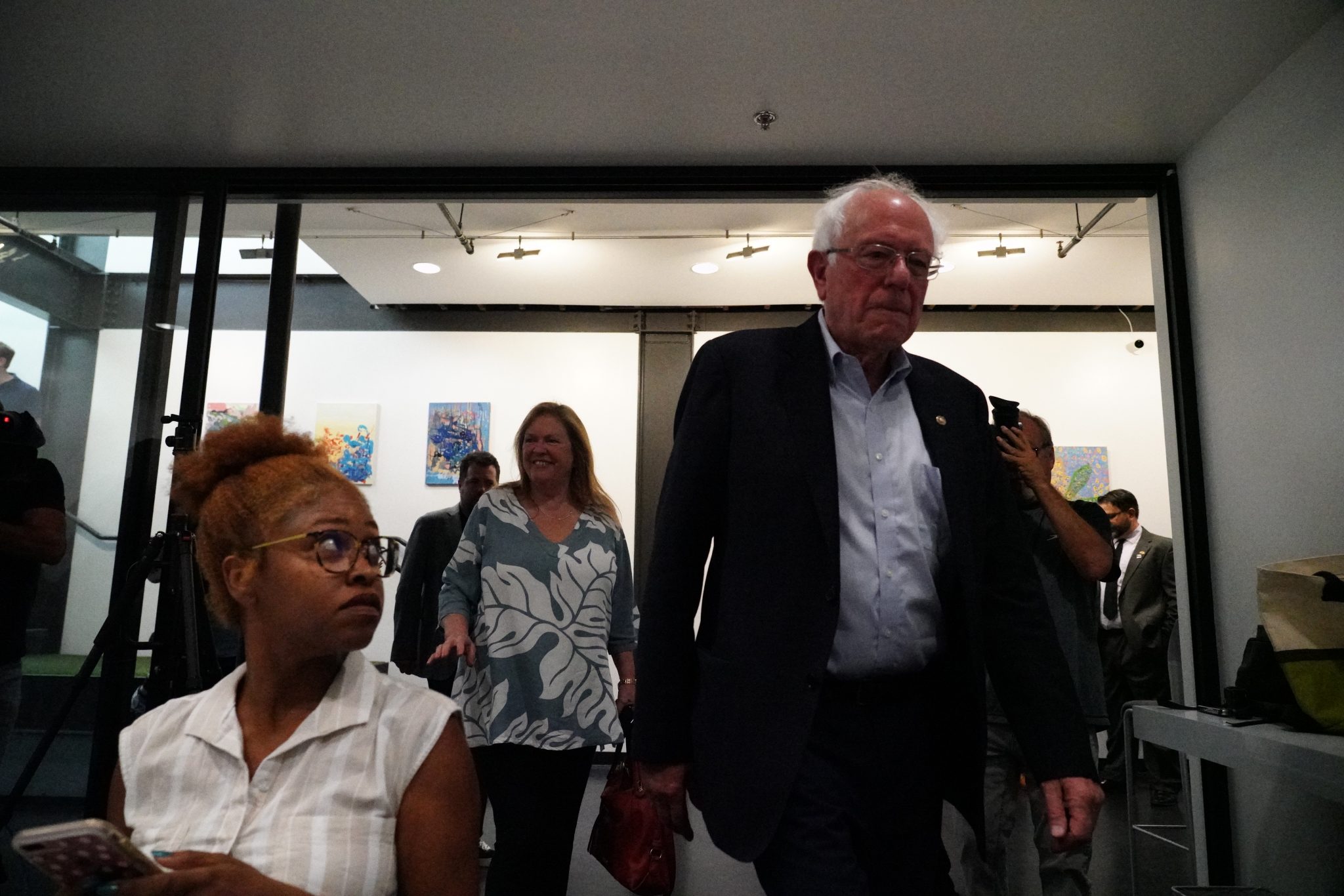 Senator Bernie Sanders and his wife Jane arrive to the press round table. (Photo by Francisco Lozano/Latino Rebels)

“We need to create a world where we are spending less money on weapons of mass destruction and more money in addressing human needs,” the Senator added.

One of the early questions came from a reporter who asked what Sanders would do to make college available to communities of color, citing low admissions numbers. “We need to make public colleges and universities tuition-free. Now, somebody correct me if I’m wrong here, but in California, more jails are being built than colleges,” Sanders responded, “We need an education revolution that starts with childcare all the way to college and university that is tuition-free and we need to cancel student debt that is a burden on the backs of millions of Americans whose only crime was to get an education.”

“Yes, we do have an immigration crisis, in some ways made worse by the President. We have approximately 11 million people who are undocumented, and in this city and throughout the country, we have children who are living under unbelievable anxiety. Can you image a kid going to school today and not knowing whether his mom and dad will be there when he gets home from school?” Sanders said. 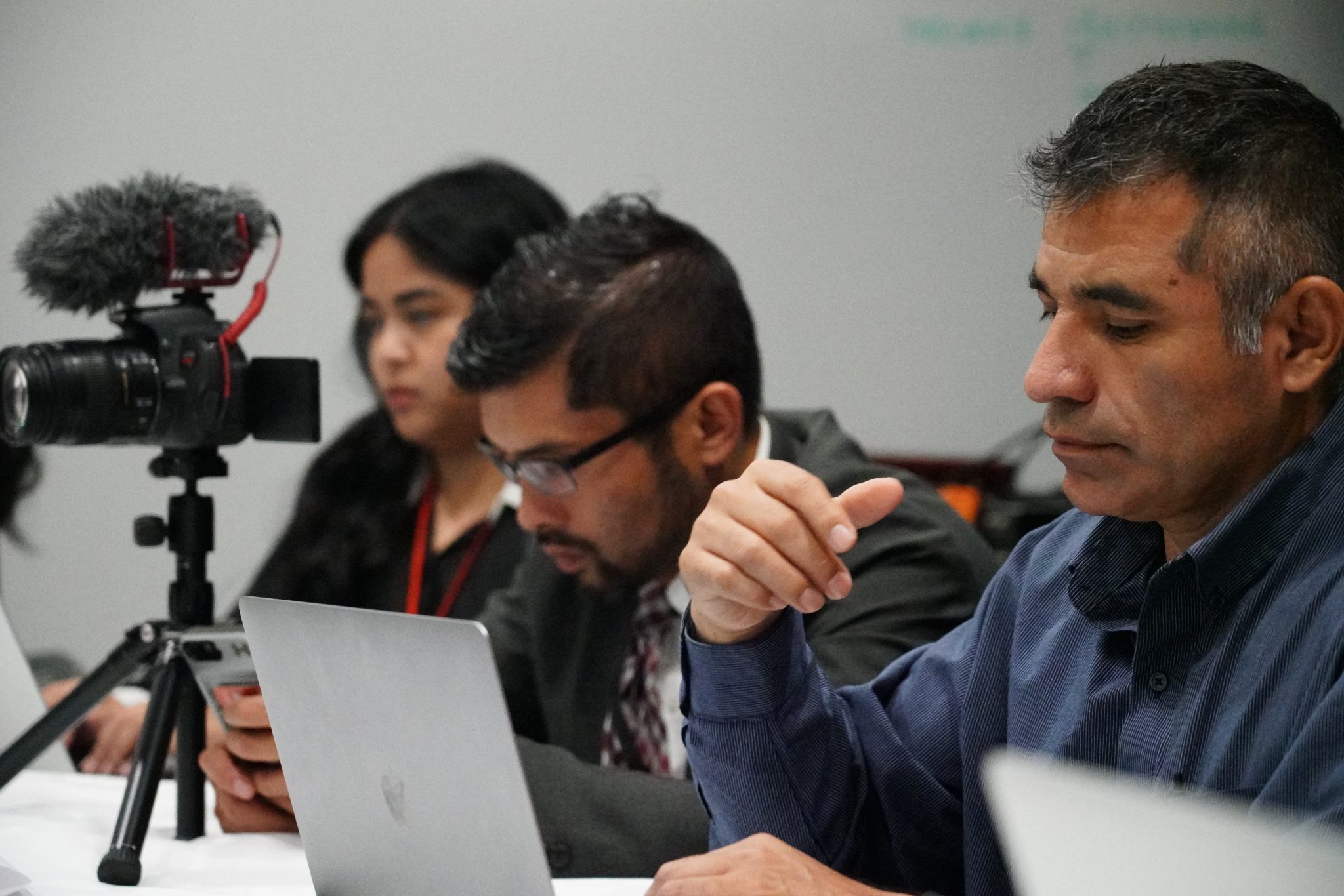 Members of different outlets from L.A. were present during the roundtable. (Photo by Francisco Lozano/Latino Rebels)

“Instead of demonizing, instead of creating all kinds of fear in people, we need to move forward with comprehensive immigration reform,” he said, before speaking about specific policies, like Deferred Action for Childhood Arrivals (DACA).

“We need to restore and expand DACA and have a humane border policy, and that policy has to understand that if a mother travels a thousand miles by foot with a child, that mother is not a criminal but a desperate person trying to flee terrible violence in Honduras, Guatemala or wherever… and we need to come up with a humane and sensible asylum program which expedites the process; we don’t yank babies off of the mother’s arms,” Sanders concluded.

Latino Rebels asked Sanders about his plans to win over Latino voters.

“Exactly what I’m doing to earn everybody’s vote,” he said. “I think the Latino community has its issues, the African American community has its issues, everybody has its issues… but this is what we say to our brothers and sisters in the Latino community—we are more than aware that immigration is a big issue. I was talking to a teacher who said that they have so many kids who are dealing with anxiety because the entire family may be separated and not knowing if the parents will be there when they come back from school. That is not just for the Latinos but other minorities who are dealing with the same issue”.

Senator Sanders also spoke to Latino Rebels about other concerns of Latinos and other POC communities, including healthcare and criminal justice.

“People are working for low wages and cannot afford health insurance, Medicare for all will solve that problem,” Sanders said. 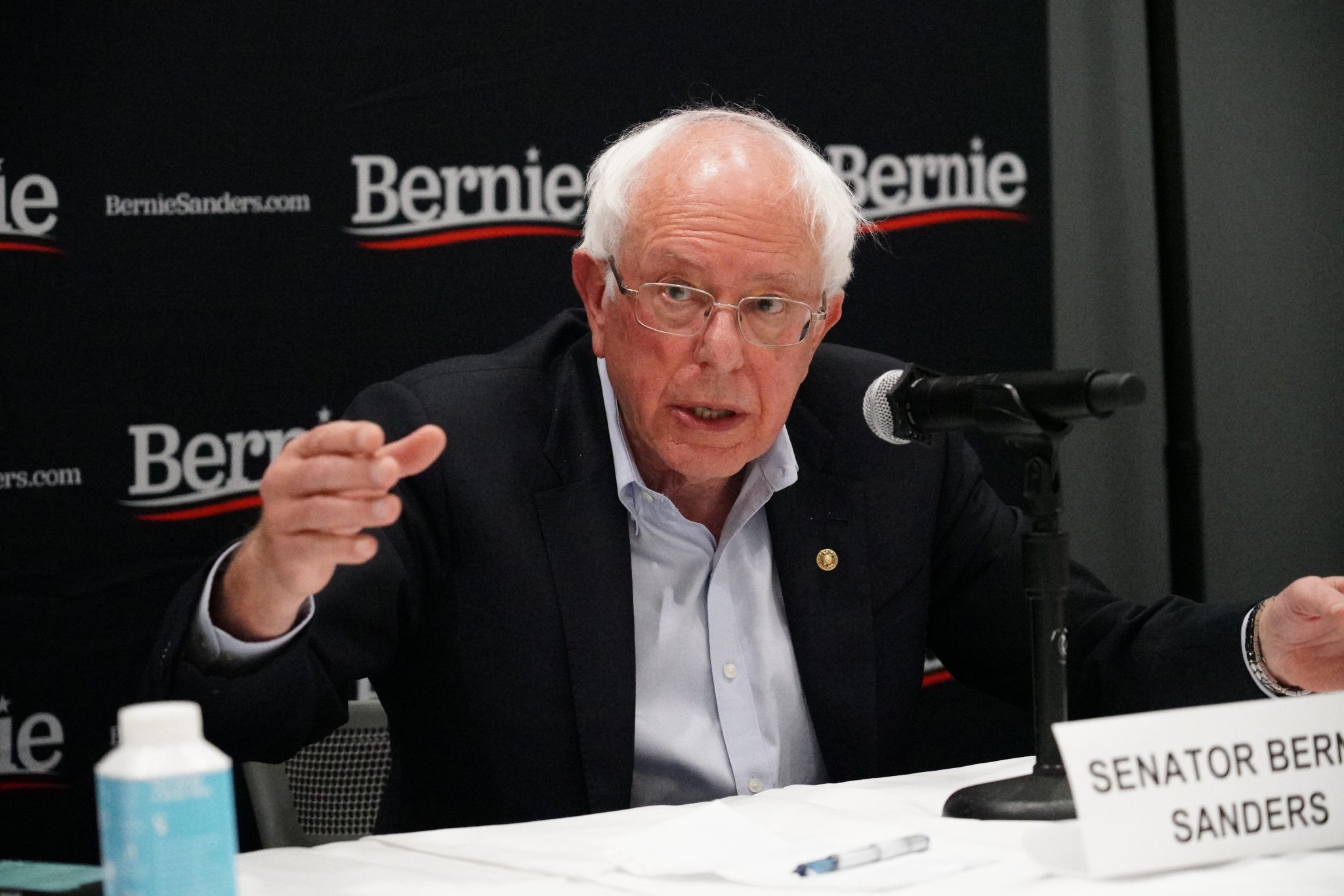 He explained: “Latinos and the African American community have been hit hard by a racist and broken criminal justice system. I’m proud of how change comes about. Four years ago, I came to California and said we need to stop the war on drugs because it is destroying so many lives in this country. Well, that idea seemed radical at the time. Since then, several states, including California have moved on to either decriminalize marijuana or legalize it… I gotta tell you, it is a mindblower to travel to L.A. and see [billboard] signs of corporations telling you to go buy their marijuana and can you imagine that four years ago, people were being thrown in jail [for possessing marijuana]?”

“So criminal justice, decent wages, health care and immigration reform are many of the issues that need to be addressed for the Latino community,” Sanders concluded.

“I’m on fire for Senator Sanders for his authenticity, his consistency throughout his life. Even before he became a politician, as a student he was fighting for justice, for freedom, for housing discrimination… he is a freedom fighter,” Turner said. “We need a leader who will take on the pharmaceutical industry, the prison industry, take on a rigged economy… college for all, Medicare for all… so yes, I am feeling the ‘Bern’!” 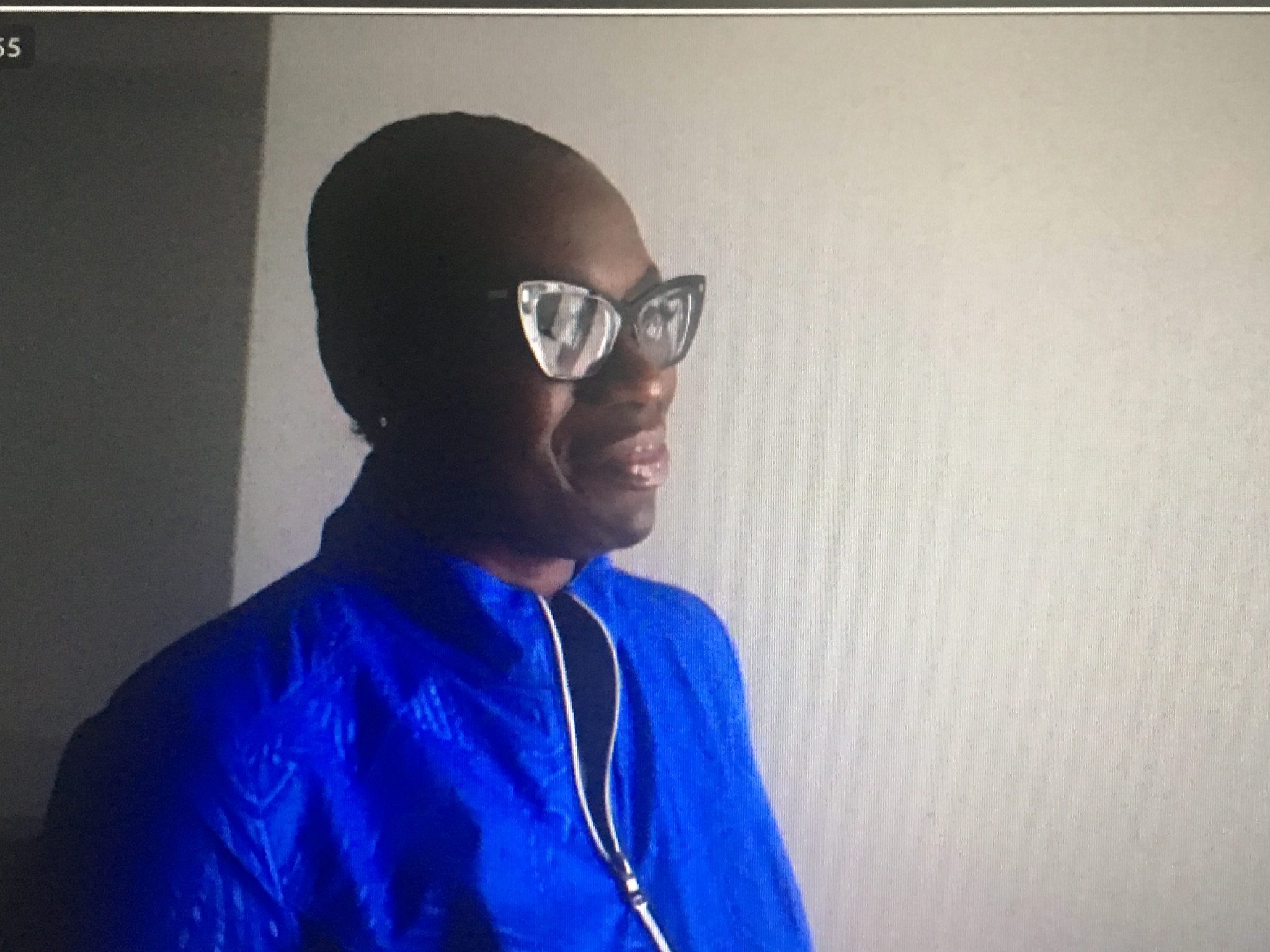 Turner also had a message for Puerto Ricans and the movement that ousted Governor Ricardo Rosselló.

“Thank you for standing up and not accepting what that governor had to say once he was exposed for the type of leader that he is and how the people both in the island and the mainland told him when he said, ‘I am not going anywhere,’ and they said, ‘Oh no, you have to go’ and they stuck to that… and that is what a political revolution is all about, it’s everyday people taking it to the streets and say ‘we deserve better than this.’” Turner said, “I applaud my brothers and sisters from Puerto Rico for keeping it real. If it weren’t for that grassroots movement, he would still be there saying ‘I’m not going anywhere.’ Oh no! He went!”

Francisco Lozano is a freelance news photographer based in Los Angeles. You can follow him @FrancisLozano7.

One response to “Bernie Sanders Hosted a Roundtable Discussion in LA for POC Media: Here’s What He Had to Say”