Your Privilege of Innocence Is Killing People 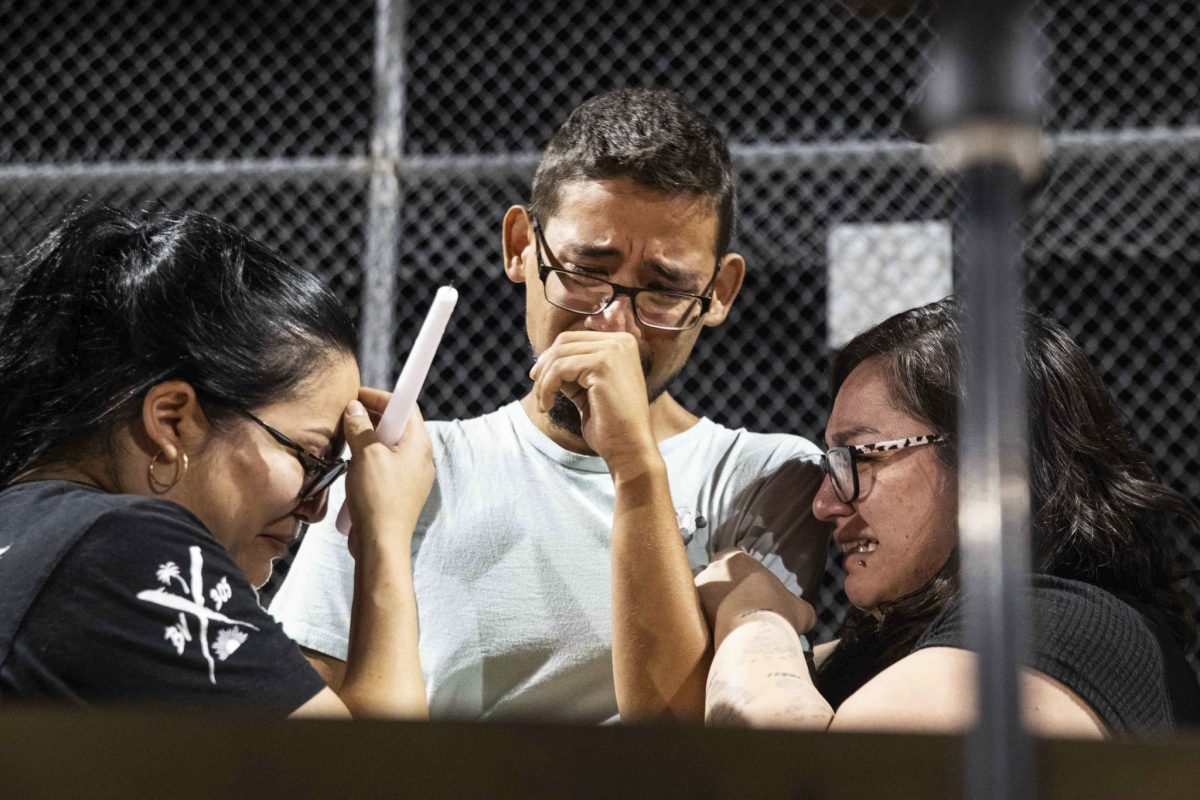 Three Walmart workers, Melisa González, Jesús Romero and Raven Ramos, who helped people to escape during the mass shooting on Saturday, Aug. 3, 2019, cry during during a vigil at Ponder Park in honor of the shooting victims in El Paso, Texas on Sunday, Aug. 4, 2019. (Lola Gomez/Austin American-Statesman via AP)

Recent events like the inhumane treatment of refugees at the border and the horrific mass shooting of El Paso have many asking a simple but loaded question: “What the hell is happening to America?” This question implies not only a remarkable sense of incredulity but also an innocence that is dangerous and deadly. An innocence that hides behind a privilege of ignorance despite a long and dreadful legacy of racism.

Disaster at the border and in El Paso is real because many of us can afford not to know or not needing to know about this legacy.

Yes, Trump has played into an ugly racial divide since he announced his presidential candidacy, but should our consternation be confined to his toxic manipulation of racism only or should we be more alarmed by the fact that there was a rampant culture of racism waiting to be activated in the first place?

It is fair to argue that Trump has not single-handedly cultivated the hatred of immigrants, of refugees, of Muslims, of blacks, and of Hispanics in this country. That hatred was always there and his rhetoric reanimated it. We fail to recognize this at our peril by claiming surprise and ignorance every time we are visited by a tragedy involving a white perpetrator or an event exposing the failure of our institutions.

Our stubborn claims of presumed innocence and moral high ground betray long-standing and pervasive realities of structural racism, of racial aggression, and of a diseased culture that refuses to see and listen to the cries of injustice in its midst. Desperate refugees have been dying horrible deaths in the Sonoran Desert for decades. Borders have long become a dark trail of loss and suffering when they once served as gates of salvation and freedom. Undocumented migrants have been deported in the millions for years separating families and condemning them to a life of unnecessary emotional and economic hardship. Muslims have been living under the pitiless yoke of retaliation and suspicion of disloyalty for years. And scenes of police brutality against black people did not start when YouTube videos could capture them.

Not pausing to address these American realities and not looking close enough to even see them is a privilege. The claim of not knowing or forgetting when one has already known and seen is a pathetic defense because our failure to see and our lapses of memory are killing people.

We laugh at the spectacle of racism that is Fox News and the chorus of hate in Trump rallies. We deride the unhinged fear-mongering of Tucker Carlson when he claims that immigrants are plundering American wealth or Laura Ingraham when she says that Congress wants to replace you with people “that don’t have an affinity for our country” and that the invasion of immigrants is causing “a total breakdown in the values of this country that I grew up in, and it’s just disgusting.”

Chants of “send her back” and “shoot them” in reference to a Muslim Congresswoman and immigrants at Trump rallies are a disgrace but unfortunately not an anomaly. Similar taunts are familiar both in mainstream right wing talk radio and in the dark seams and uninhibited havens of the Internet like 4Chan, 8Chan, Breitbart, and the Daily Stormer before them. We gasp, whine, retweet, and move on as we nervously await news of the next tragedy.

This racism has killed people and now it’s killing all of us. How much more chilling does the news have to get before we recognize the sordid reality of racism in this country? Blacks have screamed “we can’t breathe,” refugees fleeing despicable violence have begged “take us in,” and hundreds of toddlers separated at the border are howling in distress “mamá” and “papá.”

The racism at our borders and the deep hate in El Paso are consequences of our persistent deafness. Incidents like these act like shocks to our memory to remind us of what we didn’t want or dare to see. Yes, it is the hateful speech that animates the message boards of the Internet, the hysteria that is called up to argue in favor of racial replacement theories, and the antipathy for immigrants seen only as invading foreigners and threatening aliens. But it is also our paralyzing silence while we watch the worst of us define who we are. Not knowing or claiming this is not America is not only naive but deadly.

Worse yet, the privilege of innocence allows certain people to turn a blind eye on these historical and contemporary injustices while others live their brutalizing consequences. The future holds no relief if we continue to meet this racial pain with indifference or fleeting empathy. James Baldwin, that brave beacon of unflattering truths, once said that “Not everything that is faced can be changed, but nothing can be changed until it is faced.”

Our innocence is only an evasion of the racial truths haunting this country. When will we begin to truly listen to retrieve the humanity of the other? When are we ready to read the anguish of the past into our present? And when can we finally do away with the comfort of not knowing? The murderer of El Paso has reveled in that ignorance and his bullets have tragically belied the myth of a perfect society.

Innocence breeds an eerie silence about race, an impasse of expression that tiptoes around substantive concerns about racial injustice without ever accomplishing anything. Senate Majority Leader Mitch McConnell was recently asked about reparations and this was his answer: “I don’t think reparations for something that happened 150 years ago for whom none of us currently living are responsible is a good idea. We’ve tried to deal with our original sin of slavery by fighting a civil war, by passing landmark civil rights legislation. We elected an African American president.”

McConnell: "I don't think reparations for something that happened 150 yrs ago for whom none of us currently living are responsible is a good idea. We've tried to deal with our original sin of slavery by fighting a civil war …We've elected an African American president."
Via ABC pic.twitter.com/yGQLpeyHGz

Not only is he tone deaf to the persistent debris of the original sin, McConnell speaks with a definitive authority that forecloses any reparative possibility and dismisses any hope for confronting a lingering cruelty that still produces pain and inequality. His claim of innocence, here and on many instances of racial injustice, is the erasure that emboldens the resolve of racists and normalizes their deafness.

Beyond empathy or silence, our times clamor for a radical reparative politics that transforms pain into justice, that retrains the ear to listen intently for the unspoken pain of others, and that delivers all of us from the grip of our current state of melancholia. Despite its soreness, El Paso can show us the path away from our privilege of innocence.

Nabil Echchaibi is an associate professor and chair of the Department of Media Studies at the University of Colorado Boulder. He tweets from @nechchai.