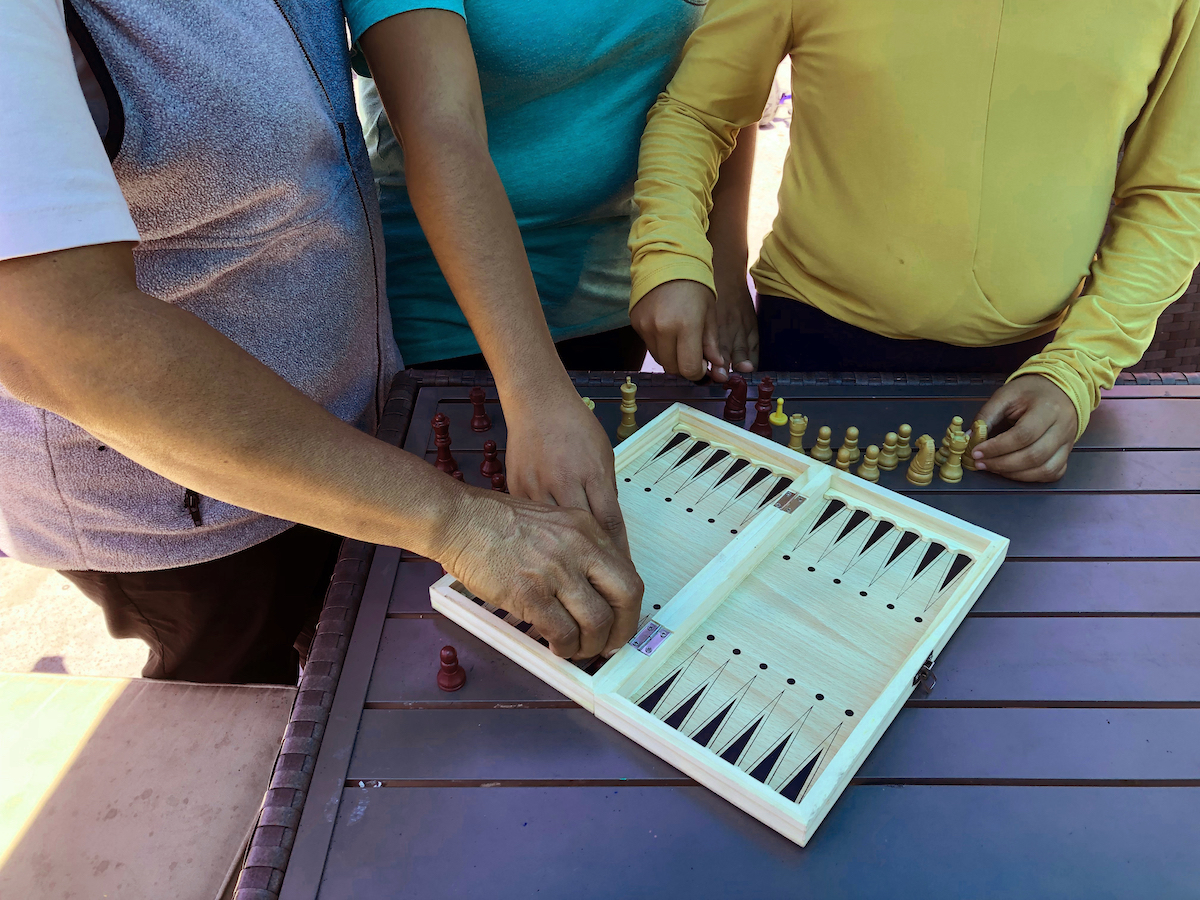 This Tuesday, Aug. 27, 2019 photo, from left, Luz Viviana Pérez, 53, arranges chess board with her daughters, 17 and 12, at a migrant shelter affiliated with the San Diego Rapid Response Network in San Diego. (AP Photo/Elliot Spagat)

SAN DIEGO (AP) — A detailed snapshot of the recent surge of asylum-seeking families on the Mexican border gives a sense of how they were treated after entering the U.S. and where they settled.

Houston was the destination for 432 of 7,358 families who were briefly housed in a San Diego shelter from late October through June, 100 more than the second most popular spot, Los Angeles. The count reflects Houston’s emergence as a primary gateway for immigrants, including many Central Americans.

In another reflection of shifting demographics, Chicago, a longtime draw for Mexican immigrants, was the destination for only 76 families, ranking 21st with less than half the number of families headed to Nashville, Tennessee, and barely more than Fort Myers, Florida.

Dumas, a town of 15,000 people in the Texas Panhandle that is half Latino and has a large meatpacking plant nearby, was the destination for 56 families, more than Denver, Phoenix or Seattle. Other small cities that drew large numbers include Huntsville and Gadsden in Alabama and Chattanooga, Tennessee.

The cities were drawn from a database compiled by Tom Wong, an assistant political science professor at University of California, San Diego, based on registration forms at a shelter affiliated with the San Diego Rapid Response Network, a coalition of attorneys, advocates and civic groups.

The coalition opened its shelter in late October, when U.S. authorities began releasing asylum-seeking families before they could arrange travel. Families were released with an ankle monitor for heads of household and notices to report to authorities in destination cities while their cases wind through bottlenecked immigration courts. 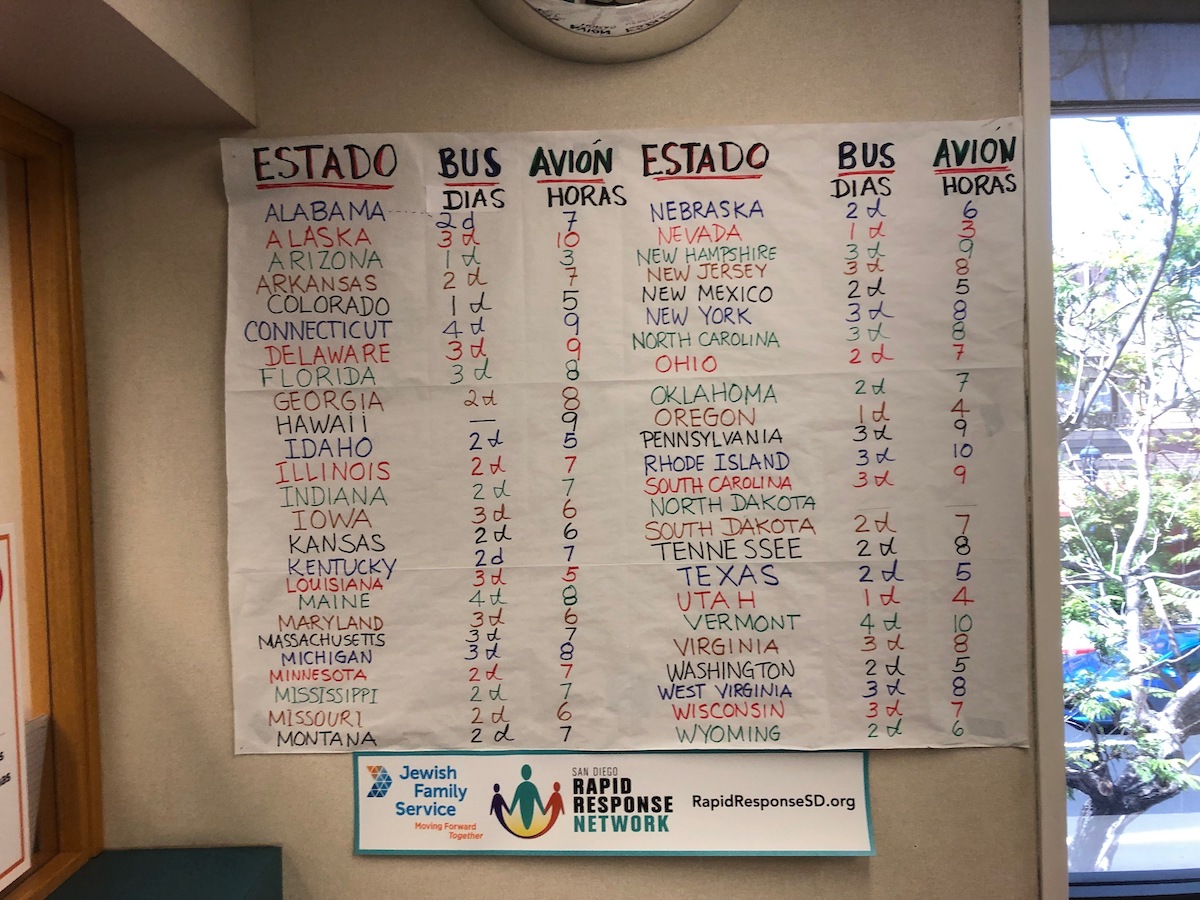 This Tuesday, Aug. 27, 2019 photo, a sign in Spanish with travel times to U.S. destinations is on display at a migrant shelter affiliated with the San Diego Rapid Response Network in San Diego. (AP Photo/Elliot Spagat)

U.S. authorities arrested or stopped nearly 800,000 people from October to June, making the San Diego survey of more than 17,100 adults and children a partial but still significant view of a surge that overwhelmed authorities and led to migrants being held in sometimes squalid conditions.

Among San Diego asylum-seeking families, 31% reported problems with U.S. custody conditions, according to a study that Wong’s U.S. Immigration Policy Center published Wednesday. Families were held an average of 3.4 days.

The most common complaints were about food and water, including insufficient infant formula, spoiled food and dirty water. Others reported issues with hygiene, including not having a toothbrush or toothpaste and lack of showers. Nearly half those who complained had issues related to sleep, overcrowding and confinement and cold temperatures.

The study found that one of every five heads of households had a primary language other than Spanish but nearly 90% of them were given legal instructions in Spanish. Other common languages include the Mayan dialects of K’iche’, Q’eqchi and Mam, Vietnamese and Creole.

Guatemalans accounted for 48% of families served in San Diego, Hondurans made up 30%, El Salvadorans 8% and Haitians 5%. 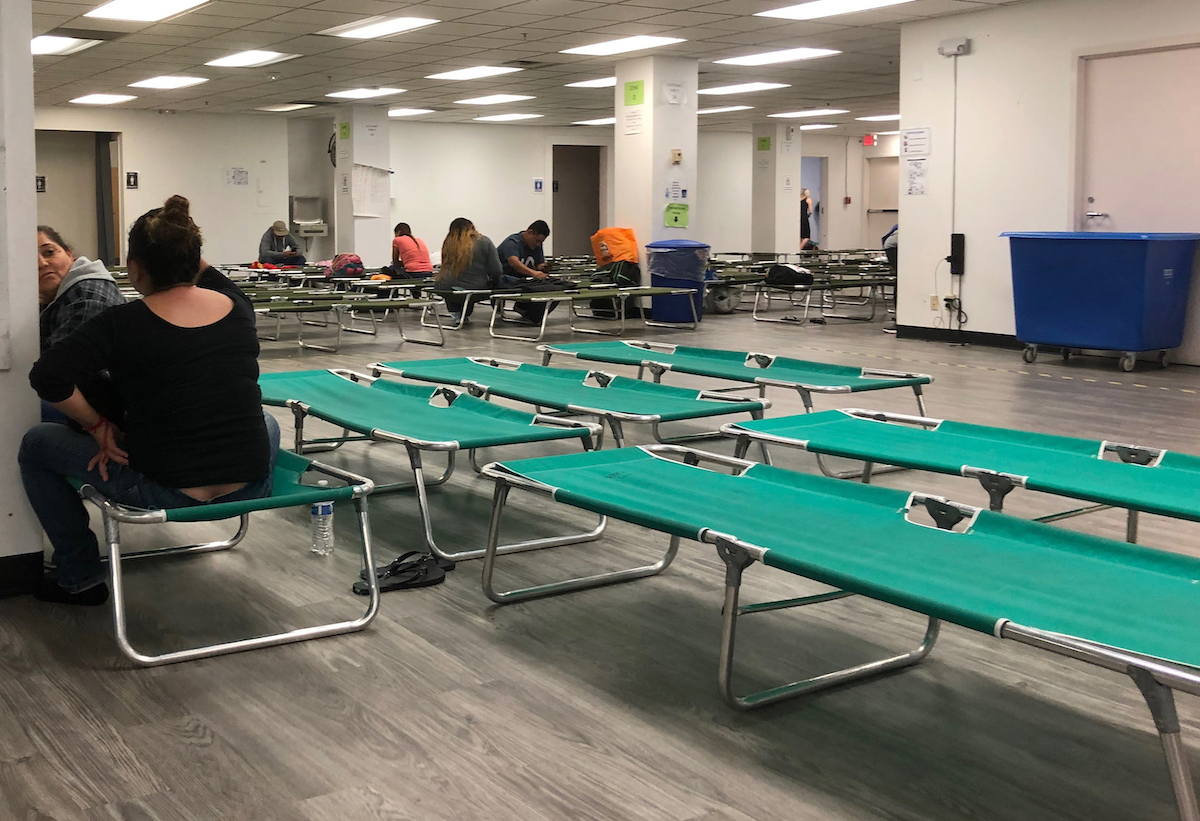 This Tuesday, Aug. 27, 2019 photo, two people talk as cots are set up at a migrant shelter affiliated with the San Diego Rapid Response Network in San Diego. (AP Photo/Elliot Spagat)

“These findings raise serious due process concerns,” said Kate Clark, director of immigration services at Jewish Family Service of San Diego. “If asylum-seeking families are not being given vital instructions about their immigration proceedings in a language they can read or understand, how can we expect them to navigate an already complex legal process that is increasingly stacked against them?”

U.S. Customs and Border Protection did not immediately respond to a request for comment.

San Diego County has allowed Jewish Family Service to occupy a former courthouse for free. The shelter, which relies on state funding and private donations, houses up to 250 people, giving hot meals, showers and cots for one to three days.

The population has dropped as border arrests have fallen and the U.S. ramped up a policy to make asylum seekers wait in Mexico while their cases wind through U.S. courts. Mexicans are exempt from the policy.

Luz Viviana Pérez, 53, said she spent more than two years on the run through her native Mexico, trying to escape an abusive partner who trailed her, knocked her teeth out and pressured their 17-year-old daughter to become a prostitute.

“We’ve been throughout Mexico, fleeing from place to place,” she said Tuesday at the shelter with her daughters, 17 and 12.

Pérez is familiar with complaints about U.S. custody conditions but she had no gripes about her five days in a 30-person cell. The lights were always on but she ate four times a day and showered every other day.