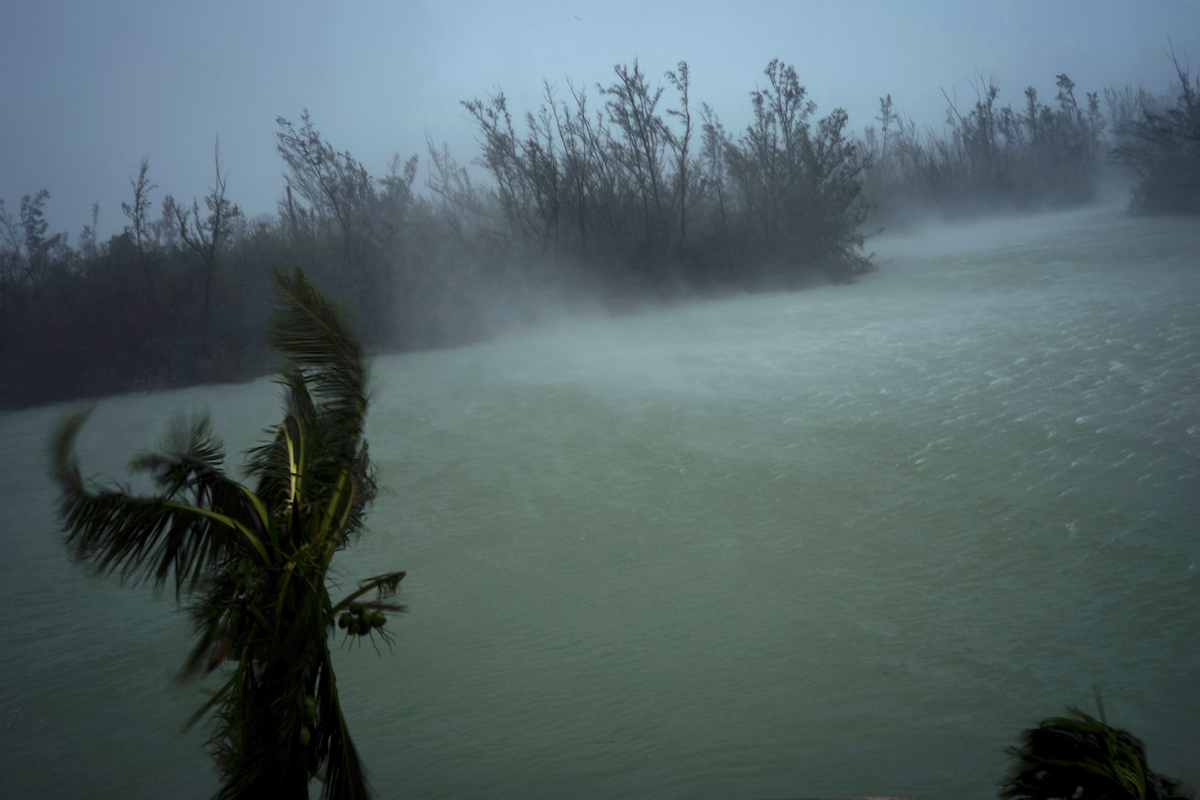 Strong winds from Hurricane Dorian blow the tops of trees and brush while whisking up water from the surface of a canal that leads to the sea, located behind the brush at top, seen from the balcony of a hotel in Freeport, Grand Bahama, Bahamas, Monday, Sept. 2, 2019. (AP Photo/Ramon Espinosa)

NASSAU, Bahamas (AP) — Hurricane Dorian unleashed massive flooding across the Bahamas on Monday, pummeling the islands with so much wind and water that authorities urged people to find floatation devices and grab hammers to break out of their attics if necessary. At least five deaths were blamed on the storm.

“We are in the midst of a historic tragedy,” Prime Minister Hubert Minnis said, calling the devastation “unprecedented and extensive.”

The fearsome Category 4 storm slowed almost to a standstill as it shredded roofs, hurled cars and forced even rescue crews to take shelter until the onslaught passed.

Officials said they received a “tremendous” number of calls from people in flooded homes. A radio station received more than 2,000 distress messages, including reports of a 5-month-old baby stranded on a roof and a grandmother with six grandchildren who cut a hole in a roof to escape rising floodwaters. Other reports involved a group of eight children and five adults stranded on a highway and two storm shelters that flooded.

Forecasters warned that Dorian could generate a storm surge as high as 23 feet (7 meters).

Police Chief Samuel Butler urged people to remain calm and share their GPS coordinates, but he said rescue crews had to wait until weather conditions improved.

“We simply cannot get to you,” he told Bahamas radio station ZNS.

On nearby Abaco Island, Parliament member Darren Henfield said he received reports of deaths but officials had not been able to confirm them. 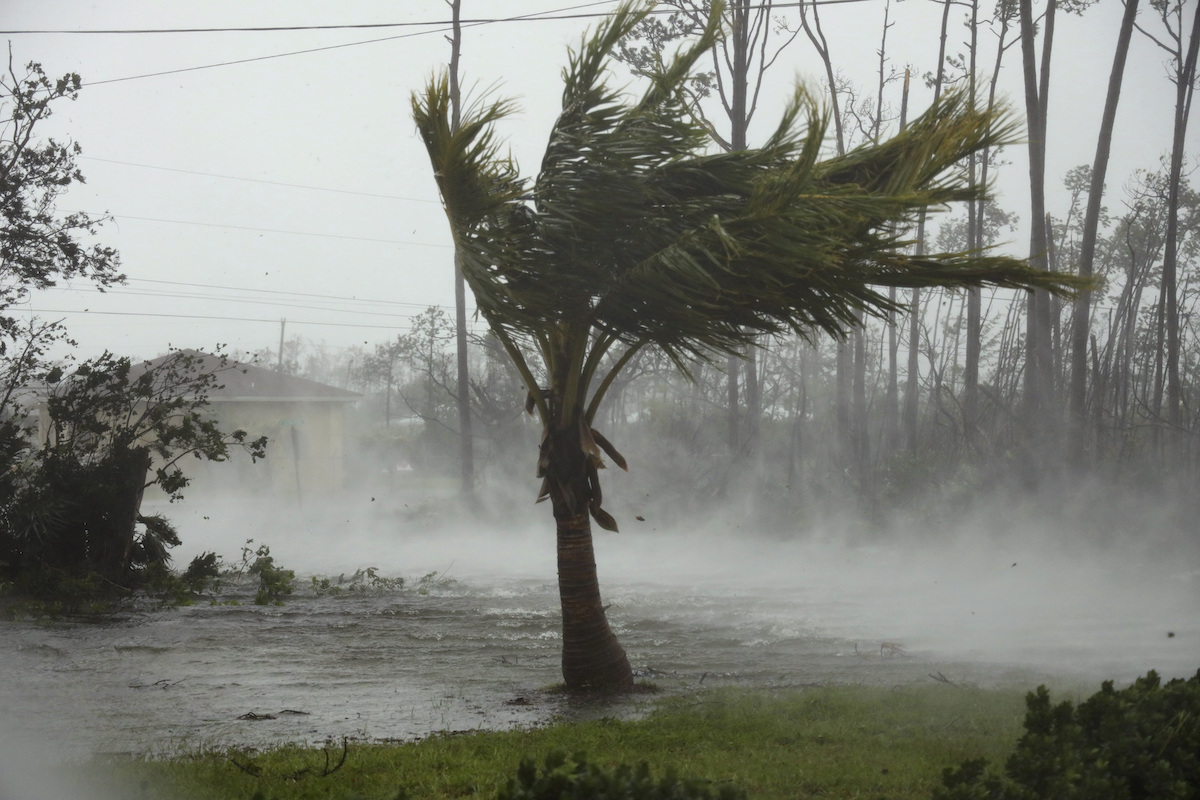 Meanwhile in the United States, the National Hurricane Center extended watches and warnings across the Florida and Georgia coasts. Forecasters expected Dorian to stay off shore, but meteorologist Daniel Brown cautioned that “only a small deviation” could draw the storm’s dangerous core toward land.

By 5 p.m. EDT Monday, the storm’s top sustained winds fell slightly to 145 mph (230 kph). It was crawling along Grand Bahama Island at 1 mph (2 kph) and then remained stationary.

The water reached roofs and the tops of palm trees. One woman filmed water lapping at the stairs of her home’s second floor.

In Freeport, Dave Mackey recorded video showing water and floating debris surging around his house as the wind shrieked outside.

“Our house is 15 feet up, and right now where that water is is about 8 feet. So we’re pretty concerned right now because we’re not at high tide,” said Mackey, who shared the video with The Associated Press. “Our garage door has already come off…. Once we come out of it with our lives, we’re happy.”

On Sunday, Dorian churned over Abaco Island with battering winds and surf and heavy flooding.

Henfield described the damage as “catastrophic” and said officials did not have information on what happened on nearby cays. “We are in search-and-recovery mode. … Continue to pray for us.”

A spokesman for Bahamas Power and Light told ZNS that there was a blackout in New Providence, the archipelago’s most populous island. He said the company’s office in Abaco island was flattened.

“The reports out of Abaco as everyone knows,” spokesman Quincy Parker said, pausing for a deep sigh, “were not good.”

Most people went to shelters as the storm neared. Tourist hotels shut down, and residents boarded up their homes. Many people were expected to be left homeless.

On Sunday, Dorian’s maximum sustained winds reached 185 mph (297 kph), with gusts up to 220 mph (354 kph), tying the record for the most powerful Atlantic hurricane ever to make landfall. That equaled the Labor Day hurricane of 1935, before storms were named. The only recorded storm that was more powerful was Hurricane Allen in 1980, with 190 mph (305 kph) winds, though it did not make landfall at that strength.

The Bahamas archipelago is no stranger to hurricanes. Homes are required to have metal reinforcements for roof beams to withstand winds into the upper limits of a Category 4 hurricane, and compliance is generally tight for those who can afford it. Risks are higher in poorer neighborhoods that have wooden homes in low-lying areas.

Dorian was likely to begin pulling away from the Bahamas early Tuesday and curving to the northeast parallel to the southeastern coast of the U.S. The system is expected to spin 40 to 50 miles (64 to 80 kilometers) off Florida, with hurricane-force wind speeds extending about 35 miles (56 kilometers) to the west.

An advisory from the hurricane center warned that Florida’s east-central coast could see a brief tornado sometime Monday afternoon or evening.

“We can’t make everybody happy, but we believe we can keep everyone alive,” the governor said.

Authorities in Florida ordered mandatory evacuations in some vulnerable coastal areas. North Carolina Gov. Roy Cooper warned his state that it could see heavy rain, winds and floods later in the week.

A National Guard official, John Anderson, said many people were complying with the evacuation orders.

“We have not seen much resistance at all,” he said in a phone call with reporters. “People do understand that Dorian is nothing to mess around with.”