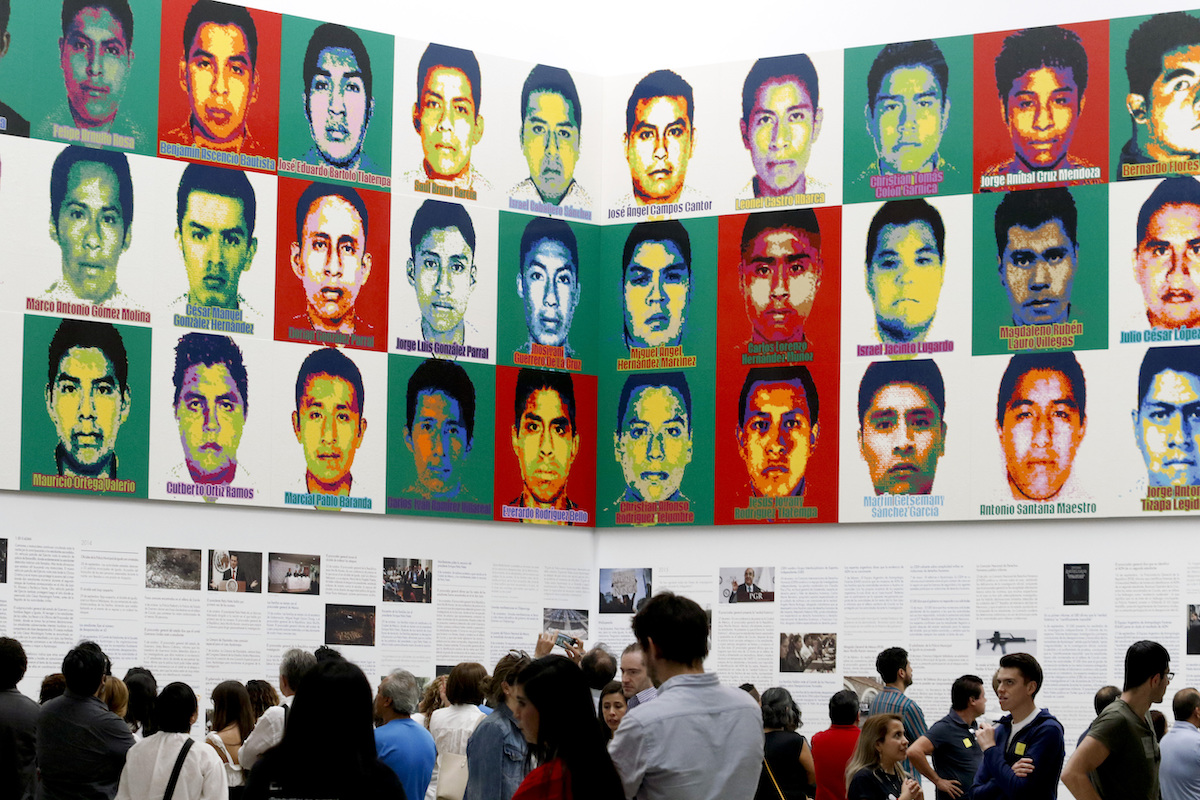 In this April 13, 2019 file photo, people stand under the portraits of 43 disappeared teachers’ college students, by Chinese concept artist and government critic Ai Weiwei at the Contemporary Art University Museum, in Mexico City. One of the main suspects in the 2014 disappearance of the students in Mexico has been acquitted, released from custody on Saturday, Aug. 31, 2019, as justice remains elusive for one of the darkest moments of the country’s recent history. (AP Photo/Claudio Cruz, File)

MEXICO CITY (AP) — One of the main suspects in the 2014 disappearance of 43 teachers’ college students in southern Mexico has been acquitted, a human rights attorney said Tuesday, as justice remains elusive for one of the darkest moments of the country’s recent history.

Santiago Aguirre, director of the human rights center known as Prodh and a lawyer for victims’ relatives, said the judge absolved Gilberto López Astudillo due to “insufficient evidence” and the suspect was released from custody on Saturday.

The case was marred by “sleaziness, human rights violations and irregularities in the investigation,” Aguirre said, adding that the prosecutor’s office failed to correct the deficiencies that happened under previous leadership.

López Astudillo has been identified as an alleged member of the Guerreros Unidos organized crime group and involved in the disappearances.

Authorities say the Ayotzinapa normal school students were abducted by police in Iguala, Guerrero state, and handed over to Guerreros Unidos.

What happened to them next has not been conclusively established.

According to the government of ex-President Enrique Peña Nieto (2012-2018), the students were killed and their bodies burned in a nearby garbage dump. Independent experts, however, say there is no evidence to support the claim that their remains were incinerated.

Institutions from the United Nations to the Organization of American States to Mexico’s National Human Rights Commission have denounced what they call errors, inconsistencies, obstruction of justice and human rights violations in the investigation, including repeated acts of torture against people arrested in the case. López Astudillo was one of them.

The Mexican judicial system ruled in June 2018 that the investigation was not “swift, effective, independent or impartial” and ordered federal prosecutors to fix that.

“Judicially speaking, the case has collapsed,” Aguirre said Tuesday. “It is a very strong blow, very bad news for the families.”

Prosecutors under the former administration never accused anyone of forced disappearance, though multiple police officers were among those arrested, nor for homicide.

Some of the more than 120 people detained were arrested for presumed membership in Guerreros Unidos, and about 70 for alleged participation in kidnapping.

With the release of López Astudillo, over 40 suspects have now been freed.

The court considered more than 100 elements of evidence, according to Aguirre. Sixty-two of them were ruled inadmissible for reasons such as they were obtained through arbitrary detention or torture, and the rest were not deemed sufficient to win a kidnapping conviction.