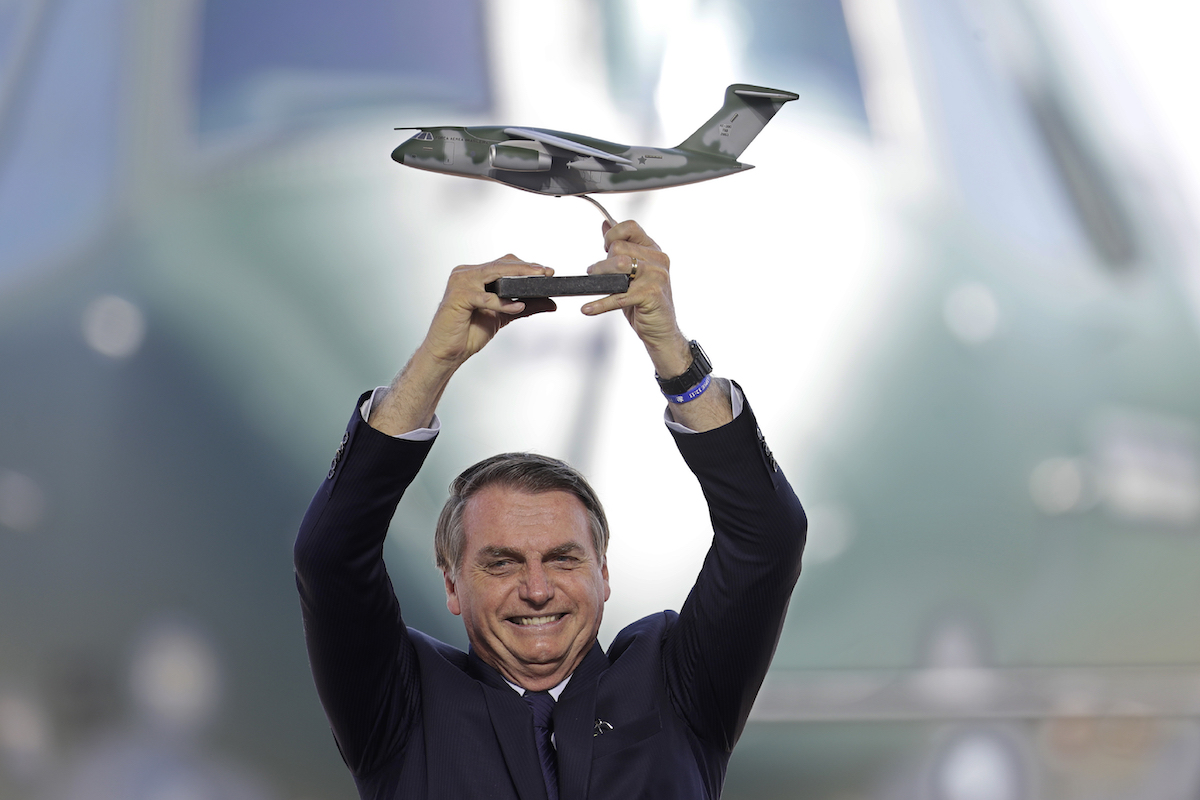 Brazil’s President Jair Bolsonaro holds up a miniature of a KC-390 plane during the Brazilian Air Force delivery ceremony of the first military aircraft KC-390, at the air base in Anápolis, Brazil, Wednesday, Sept. 4, 2019. (AP Photo/Eraldo Peres)

Bachelet “forgets that her country is not Cuba only thanks to the courage of those who stopped the left in 1973,” Bolsonaro wrote on his Facebook page, adding that among the communists that were defeated then was her father.

Bachelet’s father Alberto, an air force officer who opposed Gen. Augusto Pinochet during the coup, was imprisoned and tortured. He died in captivity in 1974.

The president’s comments came as the U.N. official and former Chilean president raised concerns about an increasing rate of killings by police in Brazil as well as alleged restrictions on civil liberties.

Speaking in Geneva, Bachelet condemned a rise in police executions “amidst a public discourse legitimizing summary executions” and the “absence of accountability”.

Without naming the Brazilian president, Bachelet criticized his wish to celebrate Brazil’s 1964 military coup as well as the denial of past state crimes. An attitude, she said, that resulted in state agents feeling “above the law and effectively able to kill without being held accountable”.

He compared her intrusion into “Brazilian sovereignty” to those recently made by French President Emmanuel Macron, who criticized Brazil for its handling of the Amazon fires and the country’s wider approach to climate change and the environment.

Brazil’s national truth commission concluded in 2014 that at least 434 people were killed or disappeared in the hands of the state during the dictatorship. It is estimated that between 30,000 and 50,000 people were illegally arrested and tortured.

In 2016, when voting to impeach President Dilma Rousseff, a victim of torture by the Brazilian military regime, Bolsonaro dedicated his vote to a colonel in charge of the torture unit. “In memory of Col. Carlos Alberto Brilhante Ustra, the terror of Dilma Rousseff, I vote yes,” Bolsonaro said.

In Chile, several politicians came out in support of Bachelet, who was elected president twice. Sen. Isabel Allende, daughter of former president Salvador Allende, ousted by the 1973 military coup, said that French President Macron was right when saying that “the people of Brazil do not deserve the President who has”.