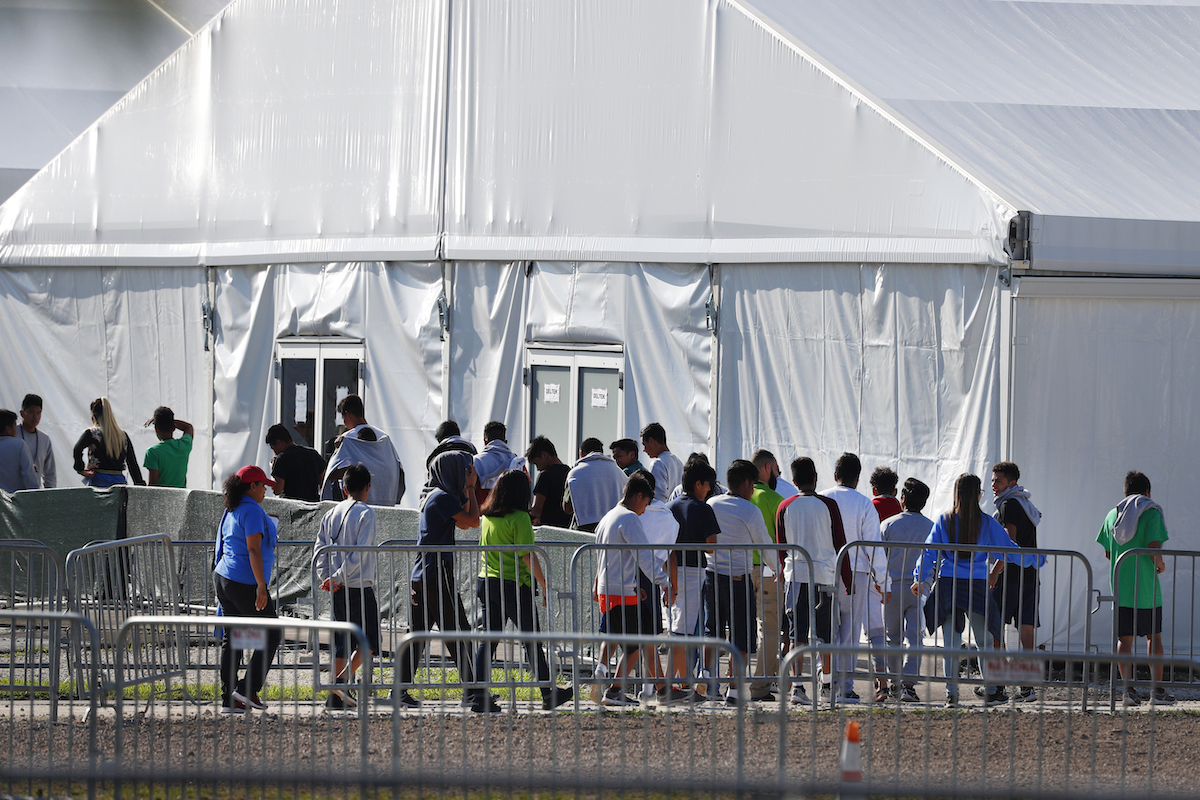 In this Feb. 19, 2019 file photo, children line up to enter a tent at the Homestead Temporary Shelter for Unaccompanied Children in Homestead, Fla. (AP Photo/Wilfredo Lee, File)

WASHINGTON (AP) — Migrant children who were separated from their parents at the U.S.-Mexico border last year suffered post-traumatic stress and other serious mental health problems, according to a government watchdog report Wednesday. The chaotic reunification process only added to their ordeal.

The Associated Press obtained a copy of the report in advance of the official release.

The children, many already distressed in their home countries or by their journey, showed more fear, feelings of abandonment and post-traumatic stress symptoms than children who were not separated, according to a report from the inspector general’s office in the Department of Health and Human Services.

Some cried inconsolably. Others believed their parents had abandoned them and were angry and confused. “Other children expressed feelings of fear or guilt and became concerned for their parents’ welfare,” according to the report.

The report is the first substantial accounting by a government agency on how family separation under the Trump administration’s “zero tolerance” policy has affected the mental health of children. It was based on interviews with about 100 mental health clinicians who had regular interactions with children but did not directly address the quality of the care the children did receive.

The separations have been widely criticized, and children’s health advocates have said the kids likely suffered trauma. A second report by the watchdog, also released Wednesday, found that thousands of childcare workers were given direct access to migrant children before completing required background and fingerprint checks.

One little boy, about 7 or 8, was separated from his father and did not know why, according to the inspector general. He believed that his dad was killed and he would also be killed.

Some of the separated children suffered physical symptoms because of their mental trauma, clinicians reported.

“You get a lot of ‘my chest hurts,’ even though everything is fine [medically]. Children describe symptoms —’Every heartbeat hurts,’ ‘I can’t feel my heart’— of emotional pain,” a clinician told investigators.

The report covers a period last year when facilities were overwhelmed under the “zero tolerance” policy, under which at least 2,500 children were separated from their parents. Children stayed behind in border custody while their parents were taken to federal court for criminal proceedings. Children held longer than 72 hours were transferred into HHS custody and placed in shelters that have traditionally cared for children who crossed the border alone.

Migrant children stay in the shelters, run by government-funded organizations, until released to a sponsor, usually a parent or close relative.

The watchdog said the longer children were in custody, the more their mental health deteriorated, and it recommended minimizing that time. It also suggested the creation of better mental health care options and the hiring of more trained staff.

The Administration for Children and Families, the HHS division that manages children, concurred with the recommendations and said it had already begun implementing them, including hiring a board-certified child, adolescent and adult psychiatrist to serve as a mental health team leader. 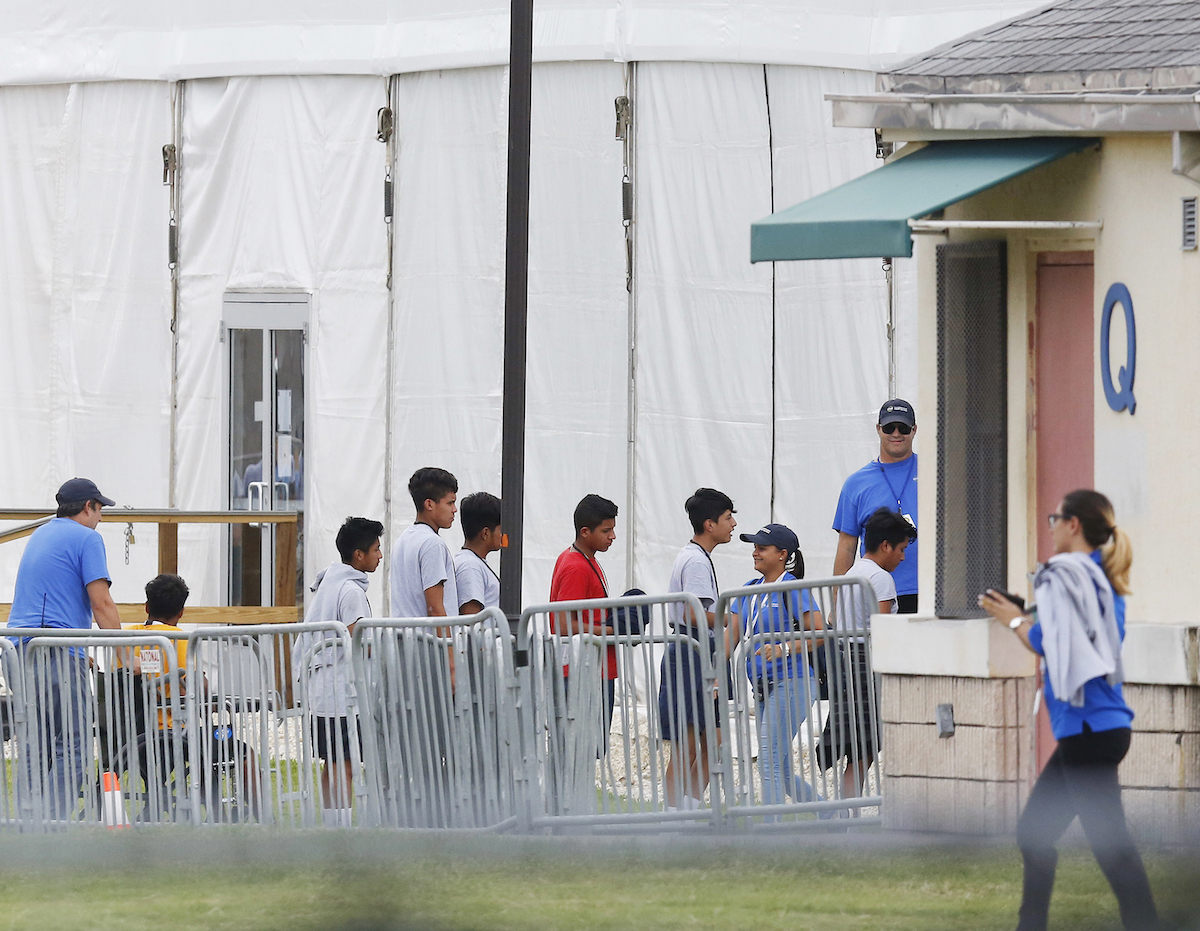 Immigrant children walk in a line outside the Homestead Temporary Shelter for Unaccompanied Children on Wednesday, June 20, 2018, in Homestead, Fla. (AP Photo/Brynn Anderson)

Department Assistant Secretary Lynn Johnson said in a letter to the watchdog that the average length of stay is much shorter now than it was last year, and noted the report was not a clinical review of treatment.

She wrote that “significant factors” beyond the agency’s control contributed to “the issues identified in the report.” Those included a surge in children at the border, the children’s unique mental health needs and a shortage of qualified bilingual clinicians, especially in rural areas.

She said that efforts were made to bring in more medical health professionals, but “adverse media coverage and negative public perception … have hampered efforts to expand.”

After a federal judge ordered the children reunified with their parents, guidance on how to do it kept changing and that led to further anxiety and distress, according to the report.

Some facilities said reunifications were scheduled with little notice or suddenly canceled.

In one case, a child was moved from a Florida facility to Texas to be reunited with her father. After the child made several trips to the detention center, she was returned to the Florida facility “in shambles,” without ever seeing him.

Investigators visited 45 facilities in 10 states during August and September of 2018, interviewing about 100 mental health clinicians who had regular interactions with children and staff.

At a minimum, each child in government custody is to receive one counseling session per week, plus two group sessions to discuss issues.

But the report found that mental health staff were overwhelmed. Usually there is one mental health clinician for 12 children, but during the period investigators studied, there were more than 25 children for one clinician.

A separate Office of Inspector General report also released Wednesday found 31 of the 45 facilities reviewed had hired case managers who did not meet Office of Refugee Resettlement requirements, including many without the required education. In addition, the review found 28 of the 45 facilities didn’t have enough mental health workers.

During a time when sponsors had to be fingerprinted, children were held in facilities for as long as 93 days. The fingerprints were sent to U.S. Customs and Immigration Enforcement and some people in the United States illegally were arrested. Advocates said many potential sponsors feared coming to get the children while the policy was in effect.

After it was ditched in March, the average length of stay dropped to 58 days and was 48 days in April.

The report also addressed the question of whether children were being given psychotropic medications after media reports described the practice. The report found the instances were very minimal; about 300 children overall between May and July of 2018 were prescribed antidepressants. Staff described reluctant children who didn’t want to take medication, and some concerns that dosage or type of medication may not have been right.

In the second report, only four of the 45 shelters reviewed by the U.S. Health and Human Services inspector general met all staff screening requirements. Caregivers at more than half of those shelters worked with migrant toddlers, children and teens who were separated from their parents or who were traveling alone before their background check results were complete.

“Grantees and contractors that fail to ensure their employees are checked appropriately should not be allowed to care for these children,” said Portman.

Federal investigators also found some shelters relying on employees to report their own criminal histories. A background check found one employee —who “self-certified” that she had no history for crimes involving child abuse— had a third-degree child neglect felony on her record.

Those waivers, for caregivers at two facilities holding thousands of children at Homestead, Florida, and Tornillo, Texas, were previously disclosed. Tornillo has closed and Homestead is empty but on “warm status” and could be reactivated.

This story is part of an ongoing joint investigation between The Associated Press and the PBS series FRONTLINE on the treatment of migrant children, which includes an upcoming film.