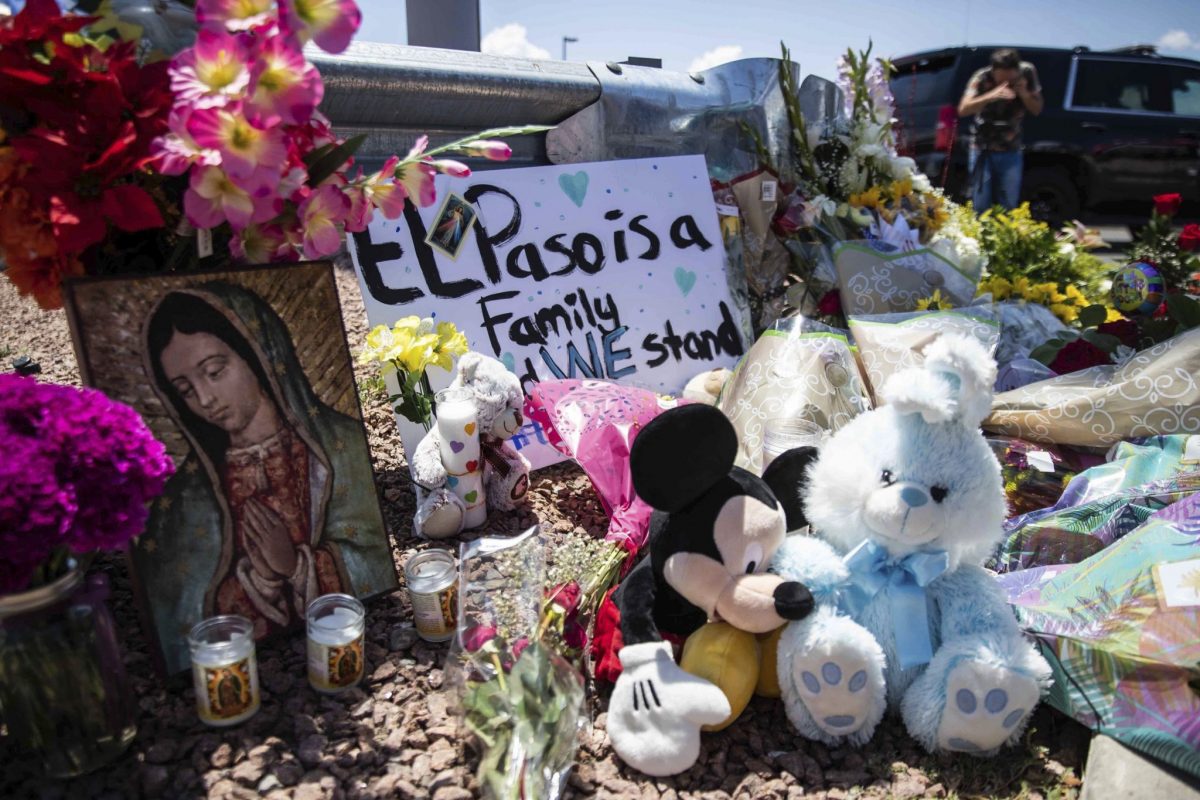 Locals bring flowers, stuffed animals, candles and posters to honor the memory of the victims of the mass shooting occurred in Walmart on Saturday morning in El Paso on Sunday, August 4, 2019. (Lola Gomez/Austin American-Statesman via AP)

My city shines near the coast of the Rio Grande outlined by layers of sand. Residents of this land mimic the color of the desert. We are resilient people left alone by the rest of Texas and the world. Our tongues waltz from English to Spanish to a tune long passed down by conquistadores and assimilations. We are an oasis of an ever-beaming sun, shielded by the magnificent Franklin Mountains.

And then someone showed up with bullets and hate that penetrated brown skin and people’s hearts. Our city burned red, not from a luminous sunset, but from the anger, sorrow, and shock of all its inhabitants. This attack was not on a handful of people—it was a declaration of hatred and revulsion to Latinos, specifically towards Mexicans.

I first read about the attack early Saturday morning on August 3. I was in San Francisco but I could picture the Wal-Mart clearly. In my head, I could see masses of people walking around the busiest store probably in the U.S. due to the shoppers from our neighboring state, Chihuahua.

This is my hood. Ever since I was a child this shopping center was the most convenient for my family and me, a mere 10 minutes from our house. In high school, I would ditch class, climb the rock wall, and walk to the mall (a place where we thought the shooting was also happening). Now, this area was showcased on worldwide news. I shook with fear as I texted mostly everyone I knew, asking if they were okay. I found myself answering phone calls, numbly responding that I was fine. There was no greater relief than knowing my family was safe at home while other families were frantically calling loved ones that would never answer their phone calls. We knew as soon as it happened that this was done by an odious being due to the political climate, we live in.

Presently, the sister cities of El Paso and Juárez are mourning souls that have been violently slain. Our naivete, our sense of safeness (El Paso had been voted the safest city in the US for the last couple of years) have also died.

Our tragedy was sadly yet another example of what we all have been witnessing for a while now. We have all seen the signs but never really saw them. Black people have been yelling through clenched teeth and bloody tongues, “RACISM EXISTS!” as they’ve been shot down by those sworn to protect us all. Mosques, synagogues, and churches have gone up in flames to which we have offered prayers and donations. Though a synch of PTSD and despair had been added to our existence, we still remained in our sheltered corner of the world where minorities are the majority.

White supremacy rang loud but in our hidden valley we didn’t grasp the full meaning of what that meant. Having lived in places where I’ve been the only POC in the room, I’ve begun to comprehend that people of color are not given the welcoming space to be who they are.

Instead, most people of Hispanic descent have purposefully disregarded their native language or reject their heritage in order to acclimatize, to prioritize white people’s ease, to avoid being harassed or worse. These are all survival mechanisms passed down since white people arrived in America and set out to eradicate our footprint from the world. They stole land and enslaved whoever they didn’t murder or rape. The fact that we are not taught the extensiveness of our brutal and gory history embellishes the terror of white supremacy.

In modern times, we continue to praise European beauty standards and discriminate against others and ourselves when those features are not present. I’ve observed that people don’t hate us entirely because of our skin, they go tanning all the time. They hate our features, our thick hair, our lively manners, our vigorous cultures, and what we represent: ancient empires of enthralling civilizations. Yet the media portrays us as maids, gardeners, drug dealers, and hyper-sexualized beings. They love ethnic food but hate the people who make it. They’re uncomfortable with our presence and our thriving population.

The president has enhanced xenophobia through derogatory words and spiteful portrayals of us. Through his speeches and tweets, he’s provided blessings to those who wish to see us gone. But what about our own prejudices against other people from our race or other minorities? There have been times when being told you’re from Juárez was a joke or a mock insult. I’ve had to examine and challenge my own behaviors and attitudes as well as realizing my own privilege and opportunity to speak up for others who are silenced. 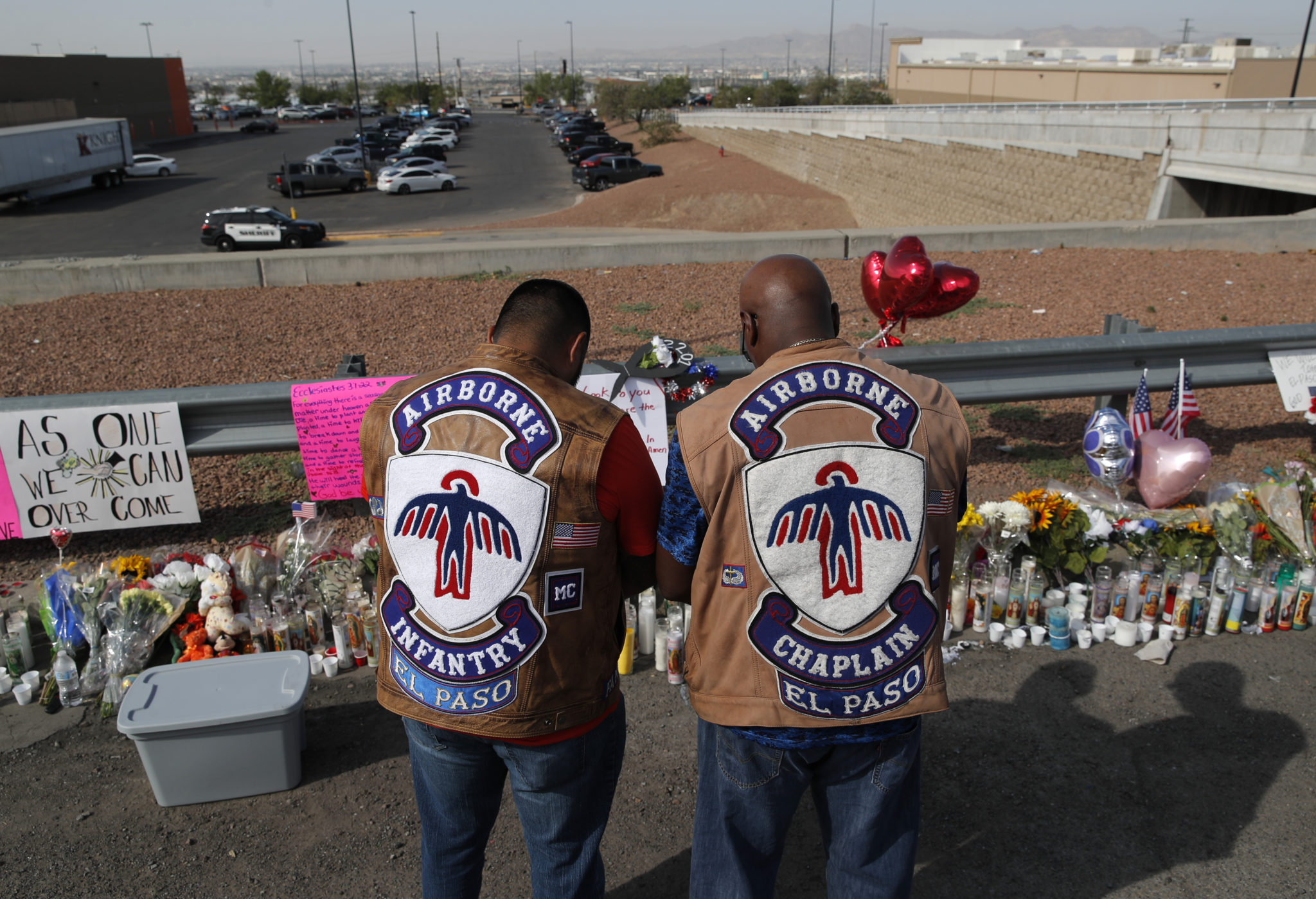 This summer, I’ve had white men pompously mansplain racism to me as if I’d never faced it myself. Once a guy had the audacity to explain to me the immigration crisis which he’s totally not against because “Mexicans are always in the kitchens working hard,” as if that’s the highest and only value my people have. As it is, Latinos are all classified as Mexicans due to ignorance: each Latin American country has its own rich culture and although we speak the same language, our words carry different meanings. People like to joke and say, “I know how to say dos cervezas, por favor” without realizing that they’re the only ones laughing at their insensitivity (this joke was funny the first time I heard it and by now, I’ve heard it a thousand times). They also like to say, “You sound like a white girl,” as if due to the way I look like I should have a certain accent or difficulty producing the language.

This is why the borderland is such a gem. Our cultures combine into one and the value of family shines through our courteous and warm manners. There’s always music playing somewhere in the streets and it’s music we’ve heard all of our lives that the musicians are practically friends to our hearts (and can trigger us to start cleaning). People greet you on the streets, “Buenos días, buenas tardes.”

Every evening, mostly everyone’s social media boasts pictures of our sunsets. How could one not be dumbfounded by the symphony of the sun’s rays over lush clouds that kiss our mountains? If you need an escape from society, all you need are your feet to take you on a hike and meditate in the silence of the desert. Plants decorate the scenery with their vibrant hues of yellow, orange, dark greens, and red, bold contrasts against the vast stretches of sand and mountainous silhouettes.

Instead of our city being known for its food, its party scene, its culture and history, we’re being dissected on worldwide news as victims of domestic terrorism. My stomach drops when I hear police sirens out of fear of a new attack. It feels as if the city is frozen with heartache.

Shopping feels different. We give each other looks to see if we’re okay, if we’re coping.

I see myself as a volcano ready to explode at any time due to the myriad of emotions begging to be released without a clear exit path. I cannot grieve in peace. Frustration and hopelessness mix bitterly together as bad news keeps pouring in from different parts of the country. More white supremacists are out as if they’ve all received invitations to make themselves known and terrorize simply because they can. The heaviness of our sadness has to be swallowed because the cavalry isn’t coming, we have to be our own soldiers.

Martin Luther King Jr. once said, “A time comes when silence is betrayal,” and if we do not encourage ourselves and the world to take action, we will all become bystanders to the horror we live in. We can start by encouraging ourselves and others to make phone calls to our senators and representatives (202-224-3121) no matter how awkward we may feel. The purpose is to let them know your concerns about gun regulations and safety.

Whether you speak to an aide or leave a message, you can state that we need thorough background checks, stricter requirements for gun purchasers, and a federal ban on assault rifles. For more information on how to contact our leaders, you can visit this page. We can strive to become more active in our local governments, and this can be as small as Googling issues that will come to a vote or attending a city council meeting. We must put pressure on politicians accepting money from the NRA, attend rallies against oppression and pro-gun safety. For more ideas on how to make a difference, read this article.

Most importantly, to our white friends, you can use your voice to speak against white supremacists. The time has come to call out our friends and family members when they’re being insensitive or degrading towards a certain group of people.

El Paso and Juárez are unlike any other cities in the world. Their blended cultures and unified history is as deep and beautiful as its people. We will rise from this, even if we fall a couple of times because strength is coded in our DNA. We will unite and reintroduce our borderland as a fearless pioneer into change. I love you, El Paso and Juárez.

Dedicated to my cities, our broken hearts, the survivors living with PTSD, and our 22 angels. May you rest in eternal peace. ♥

Maya Guillen is from El Paso. She tweets from @maya_pauuuuu.