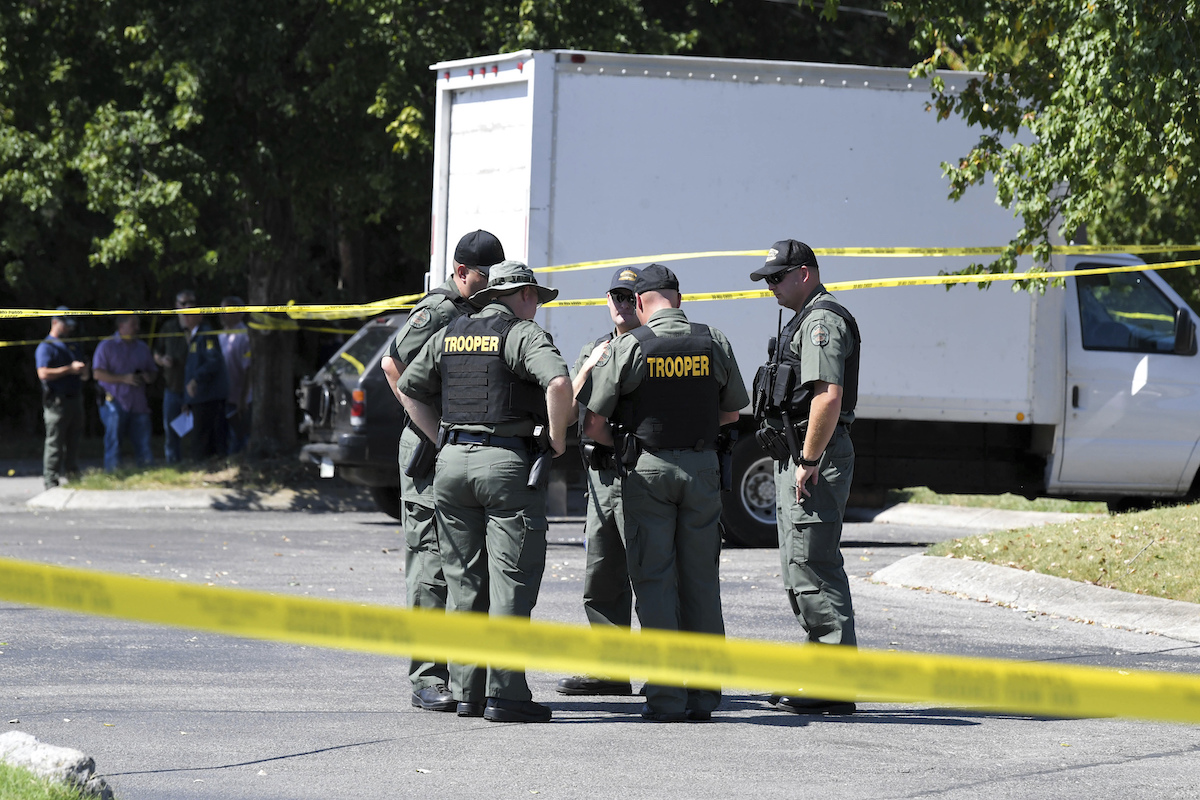 Law enforcement officers investigate the scene where shots were fired involving Immigration and Customs Enforcement agents in the parking lot of a Food Lion store on Thursday, Sept. 5, 2019, in the Antioch neighborhood of Nashville, Tenn. (Shelley Mays/The Tennessean via AP)

On Thursday evening, Latino Rebels received the following media release from Movements Including X (MIX), a grassroots Tennessee groups that focuses on community organizing and immigrant rights. The statement was in response to a published story that included a statement by U.S. Customs and Immigration Enforcement (ICE).

Here is the statement from the MIX:

NASHVILLE — On Thursday September 5, 2019, an Immigration Customs and Enforcement agent approached three men in a white work van parked in the Food Lion located in Antioch, TN. The Food Lion parking lot is used as an informal rideshare parking. Neighbors have expressed fear and anxiety over the fact that ICE has escalated a civil matter into the use of deadly force. The MIX denounces terrorizing of community members, using lethal force against our neighbors, and calls on our local elected officials to end cooperation with ICE.

The plain-clothed Immigration Customs and Enforcement agent approached three men in a parked white work van and requested to see IDs without any reported provocation or necessity. Two of the men in the van provided their IDs. However, the third person exercised his right to refuse to show his ID without a judicial warrant. Then the ICE agent fired an unconfirmed number of gunshots at the man who refused to show his ID.

The victim managed to escape in the box truck that was found parked in a neighborhood trailer park nearby. Federal officials and MNPD are still looking for the victim and are currently unaware of his whereabouts. Members of the MIX’s program Migra Watch were the first on the scene and arrived to start a live stream and record the incident.

The two men, who were with the victims, were interviewed by federal investigators. A bystander managed to speak with one of the witnesses verifying their story—ICE shot first and used lethal force when a community member exercised their right to refuse to show ID. No other weapon was fired. Nashville Metro Police arrived on the scene after the ICE agent reported gunfire, and soon thereafter, FBI agents arrived to take over and initiate a federal investigation.

“This is unlike anything we have seen before. We have never seen an ICE agent use lethal force in a civil matter before,” said Anna Albescu, member of The MIX. The ICE agent who was involved in this incident was one of two agents involved in a prior incident that occurred in Hermitage, TN, on July 22, 2019. In Hermitage, ICE attempted to use MNPD’s presence to intimidate a father to leave his vehicle after he calmly and lawfully refused.

“In light of what happened this morning, it is clear that Immigration Customs and Enforcement officials are aware and frustrated that community members understand how to exercise their rights. Now, ICE agents are taking out their frustrations on our neighbors by escalating civil matters into use of lethal force,” said Hernan Crescencio, member of the MIX.

VIDEO: @NC5 obtained video of the incident involving an ICE agent firing at a box truck with a man he tried to arrest. Federal officials say this was a possible assault on an ICE agent. STORY: https://t.co/9iHR9TBkQg pic.twitter.com/rswfIwqHNL

The MIX is calling upon Mayor David Briley, mayoral candidate John Cooper, and our Metro Council to employ their resources to end Nashville’s cooperation with Immigration Customs and Enforcement agency officially and indefinitely. The MIX is demanding a thorough investigation into the incident and demanding the absolute end of collaboration with ICE at every level within our city. Our community needs to feel safe and we deserve to be safe within our own city.

In addition, Buzzfeed News reported about what ICE spokesperson Bryan Cox is saying: “Cox said the undocumented man was previously convicted of domestic assault and aggravated child abuse. Davidson County court records show a conviction for domestic assault, but a separate charge of aggravated child abuse was dropped at the request of prosecutors. Asked to clarify, Cox said he had additional criminality but declined to go into details citing privacy rules.”

UPDATE, September 9: Local Nashville media is reporting that one of the ICE agents who was at the scene of the shooting “had been named in at least two settled federal lawsuits.”