US Tells Migrant Woman 8 Months Pregnant to Wait in Mexico 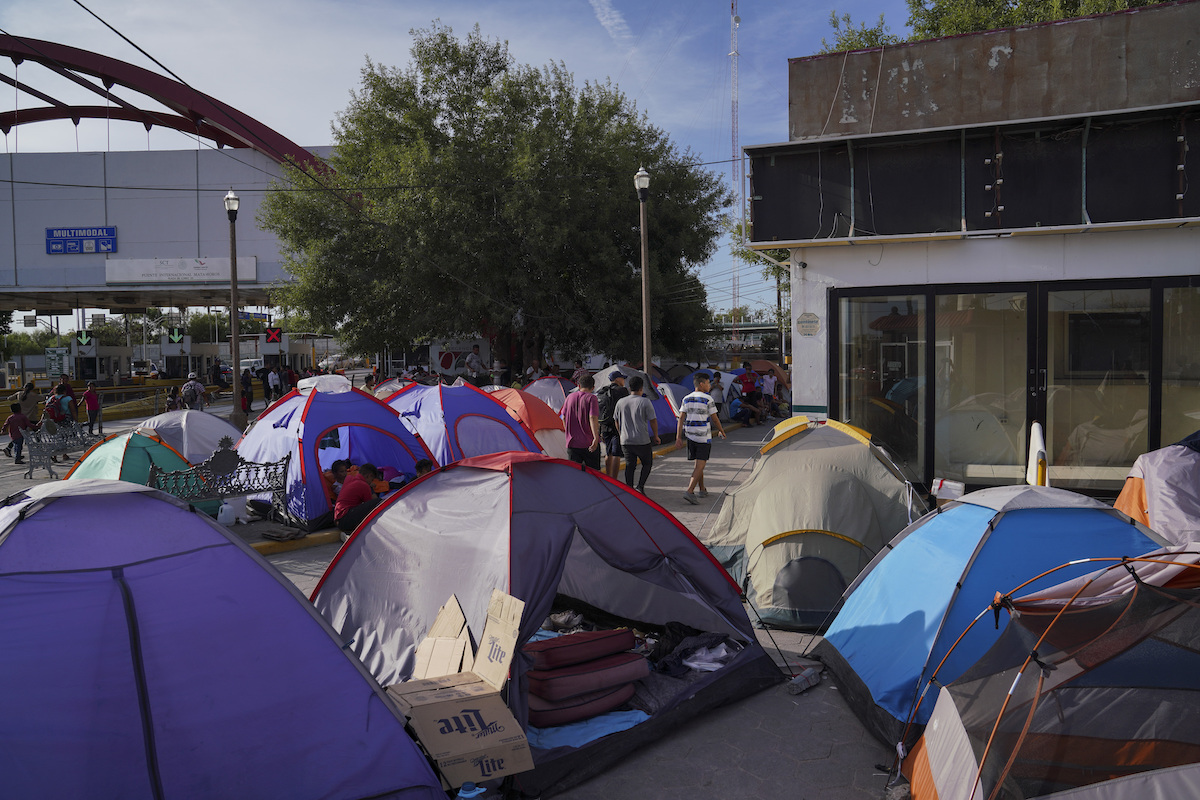 In this Aug. 30, 2019, photo, asylum seekers walk by an encampment near the Gateway International Bridge in Matamoros, Mexico. Many shelters in Mexico border are at or above capacity already, and some families have been sleeping in tents or on blankets in the blistering summer heat. (AP Photo/Verónica G. Cárdenas)

MATAMOROS, Mexico (AP) — Eight-and-a-half-months pregnant and experiencing contractions, an El Salvadoran woman crossed the Rio Grande, only to be apprehended by the Border Patrol. She was not allowed to stay.

Agents took her to the hospital, where doctors gave her medication to stop the contractions. And then, according to the woman and her lawyer, she was almost immediately sent back to Mexico.

There, she joined the more than 38,000 people forced to wait across the border for immigration court hearings under a rapidly expanding Trump administration policy. And her plight highlights the health risks and perils presented by the “Remain in Mexico” program.

The woman was waiting Thursday with her 3-year-old daughter in a makeshift tent camp in Matamoros, Mexico, next to an international bridge, due to give birth any day, said her attorney, Jodi Goodwin.

“She’s concerned about having the baby in the street or having to have the baby in a shelter,” Goodwin said.

Many shelters at the Mexico border are at or above capacity already, and some families have been sleeping in tents or on blankets in the blistering summer heat. Reports have abounded of migrants being attacked or kidnapped in Mexican border cities, especially in Tamaulipas state across from South Texas, where the Salvadoran mother is waiting for a November court date.

The Associated Press is not identifying the woman from El Salvador because she fears for her safety.

The U.S. government does not automatically exempt pregnant women from the “Remain in Mexico” program. U.S. Customs and Border Protection declined to comment on the woman’s case.

The program —officially called the Migrant Protection Protocols— was instituted by the U.S. and Mexico as a way of deterring migrants from crossing the border to seek asylum. Mexico has cooperated with the expansion of the program at the behest of President Donald Trump, who threatened crippling tariffs in June if Mexico did not do more to stop migrants.

The U.S. Department of Homeland Security has said people in “vulnerable populations” may be exempt from being sent to Mexico. But pregnant women are not necessarily considered “vulnerable” by CBP, a subsidiary of the department.

“In some cases, pregnancy may not be observable or disclosed, and may not in and of itself disqualify an individual from being amenable for the program,” CBP said in a statement. “Agents and officers would consider pregnancy, when other associated factors exist, to determine amenability for the program.” 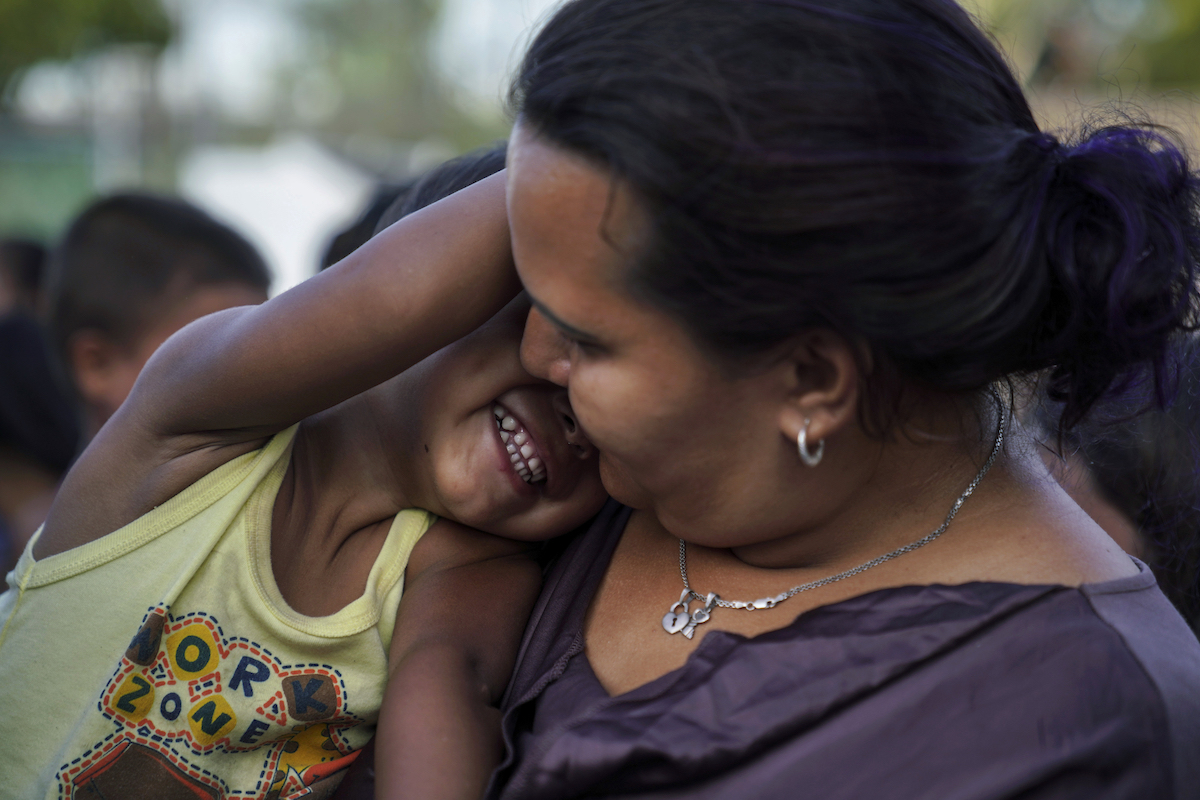 A Honduran mother plays with her son on Friday, Aug. 30, 2019, as they wait in line to get a meal in an encampment near the Gateway International Bridge in Matamoros, Mexico. (AP Photo/Verónica G. Cárdenas)

Goodwin provided copies of the 28-year-old woman’s immigration paperwork and the bracelet from when she was admitted to Valley Regional Medical Center.

“In this particular case, this woman was actually taken to the hospital by CBP,” she said. “There’s no way that CBP could suggest that her pregnancy wasn’t known.”

The paperwork instructs her to return to Brownsville on Nov. 14 for a court hearing.

The U.S. government is establishing temporary tent courtrooms in Brownsville and Laredo, Texas, where immigration judges from around the U.S. will hear migrants’ cases by video. The hearings will start in those cities later this month.

The woman’s notice lists her address as a migrant shelter in Matamoros several miles from the primary international bridge near the camp where she is staying. Goodwin says she has never been to that shelter.

There are at least six cases of pregnant women border-wide who have been sent back to Mexico, according to U.S. Sen. Jeff Merkley, an Oregon Democrat who recently sent a letter to the Department of Homeland Security’s inspector general demanding an investigation into the issue. Goodwin also represents a woman from Peru who was seven months pregnant when border agents allowed her to enter, only to send her back to Mexico the next day.

Mexico offers limited health coverage to people regardless of nationality that includes some of the screenings a pregnant woman needs, said Lina Villa, a Mexico-based health official for Doctors Without Borders. But many migrants don’t know that they can get that coverage, she said.

As their deliveries near, many migrant women aren’t sure whether they’ll have access to a hospital and if they will need surgery, Villa said. They are worried about their child being born in Mexico instead of the U.S. and what that might mean for their prospects of eventually entering the U.S., she said.

“It’s a very, very difficult group of people that needs a lot of help, and they don’t get enough,” she said.