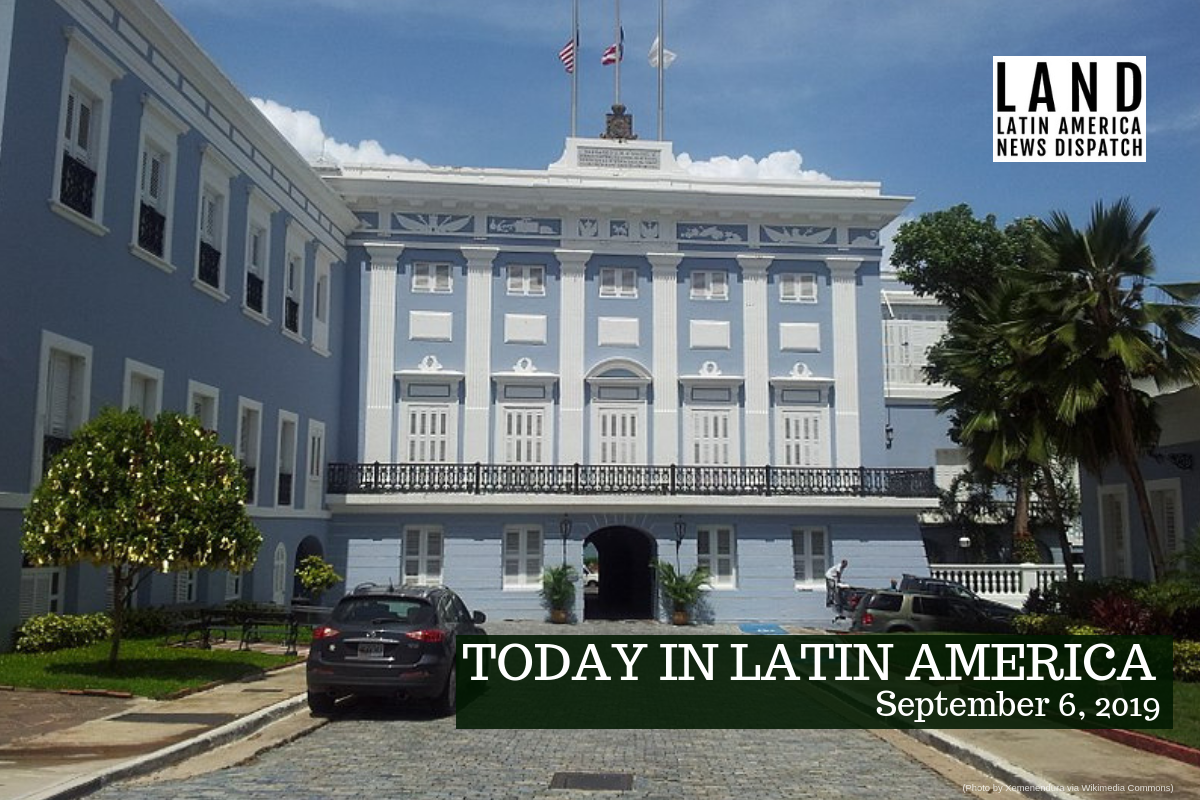 The official residence of the governor of Puerto Rico, La Fortaleza. (Photo by Xemenendura via Wikimedia Commons)

PUERTO RICO: Puerto Rican Gov. Wanda Vázquez has issued a national state of alert due to gender-based violence after a Wednesday meeting with feminist organizations and activists. Vázquez said that she chose not to sign an executive order declaring a state of emergency until a more “concrete and structured” response plan is established.

Secretary of the Interior Zoé Laboy has promised that proposals are being considered. The meeting attendees had mixed responses to Vázquez’ decision, and many are still pushing for an emergency declaration.

COLOMBIA: After several days of tensions at the Venezuela-Colombia border, President Iván Duque stated yesterday that the country has ruled out any kind of military intervention into Venezuela. “Colombia does not attack anyone, this is a country that always respects the sovereignty of other nations,” said Duque. Tensions between the two countries flared last week when former FARC Commander Iván Márquez released a video saying that he would rearm with a group of dissidents. Duque has accused the Maduro regime of supporting the dissident group. On Tuesday, Maduro put his armed forces on alert and ordered two weeks of military exercises.

COLOMBIA: The country’s ombudsman’s office announced on Monday that there is a risk of violence in at least half of the country’s municipalities for the October regional elections. According to the Ombudsman’s Office, the places in extreme risk are in the middle of territorial disputes between armed groups related to drug-trafficking activities. The alert comes just a few after the murder of Karina García, the first female candidate for the town hall office in the rural municipality of Suarez, in the southern part of the country.

BOLIVIA: Fires in the Amazon region have damaged a major jaguar habitat in Bolivia, according to a conservation group. The South America Regional Director of Panthera Esteban Payán said that around 100 jaguars may have perished near the town of San Ignacio de Velasco near the border to Brazil. The wildfires also might have also affected rock art dating back thousands of years in Santa Cruz. The Sociedad de Investigación del Arte Rupestre de Bolivia, one of the country’s archaeological institutions, asked the public on Facebook for updates on how the fires might have affected the art sites.

HONDURAS: President Juan Orlando Hernández has announced a prospective free trade agreement with Israel, after meeting with Prime Minister Benjamin Netanyahu this week. Hernández said that a delegation from Israel would be visiting Honduras in the following days to discuss further details. The announcement comes shortly after Hernández opened up a Honduran diplomatic office in Jerusalem, recognizing the city as Israel’s capital. The president had alluded to a possible trade office at the time.

PUERTO RICO: Resident Commissioner Jenniffer González has publicly criticized President Donald Trump’s decision to redistribute funds away from Puerto Rican development towards the U.S.- Mexico border wall. The Pentagon defunded projects across the U.S. and its territories on Monday, including funding for 10 military rebuilding initiatives on the island that totaled over $400 million. González argued the funds are necessary to “maintain preparedness and preserve our national security.” “I will continue to vehemently defend military programs for construction and for other purposes on the island,” said González.

MEXICO: At a press conference yesterday, President Andrés Manuel López Obrador (AMLO) welcomed an alleged proposal by drug kingpin Joaquín “El Chapo” Guzmán for his fortune to go to Indigenous groups in Mexico. According to his attorney and reporting by Spanish news agency EFE, Guzmán allegedly told his family that he wanted his fortune to be donated to Mexican Indigenous communities. In July, Guzmán was sentenced to life in prison plus another 30 years for drug trafficking and organized crime charges. At the time, the United States said it would look to seize El Chapo’s fortunes, which is estimated to be $14 billion.

MEXICO: A bill presented yesterday would impose a value-added tax on companies with digital platforms like Amazon, Cabify, Uber and Netflix. The president of the Chamber of Deputies Budget Committee Alfonso Ramírez Cuéllar, a member of the ruling Morena party, presented the proposal to the chamber. “This is to create a mechanism so that foreign businesses pay the consumption tax due [for operating] in national territory,” Ramírez said.

UNITED STATES: Mastercard halted its service to two Venezuelan financial institutions currently under U.S. sanctions. The Bank of the Bolivarian National Armed Forces and the Agricultural Bank of Venezuela are under sanctions aimed at forcing President Nicolás Maduro from power. On Wednesday, The Bank of the Bolivarian National Armed Forces tweeted that Mastercard’s move was “interventionist and arbitrary.” Last month, the U.S. blocked several companies from conducting business with Maduro, but financial institutions like Mastercard, Visa and American Express were given a March 2020 deadline to do the same.