Hondurans Feel Fate of Their Unpopular President Lies in US 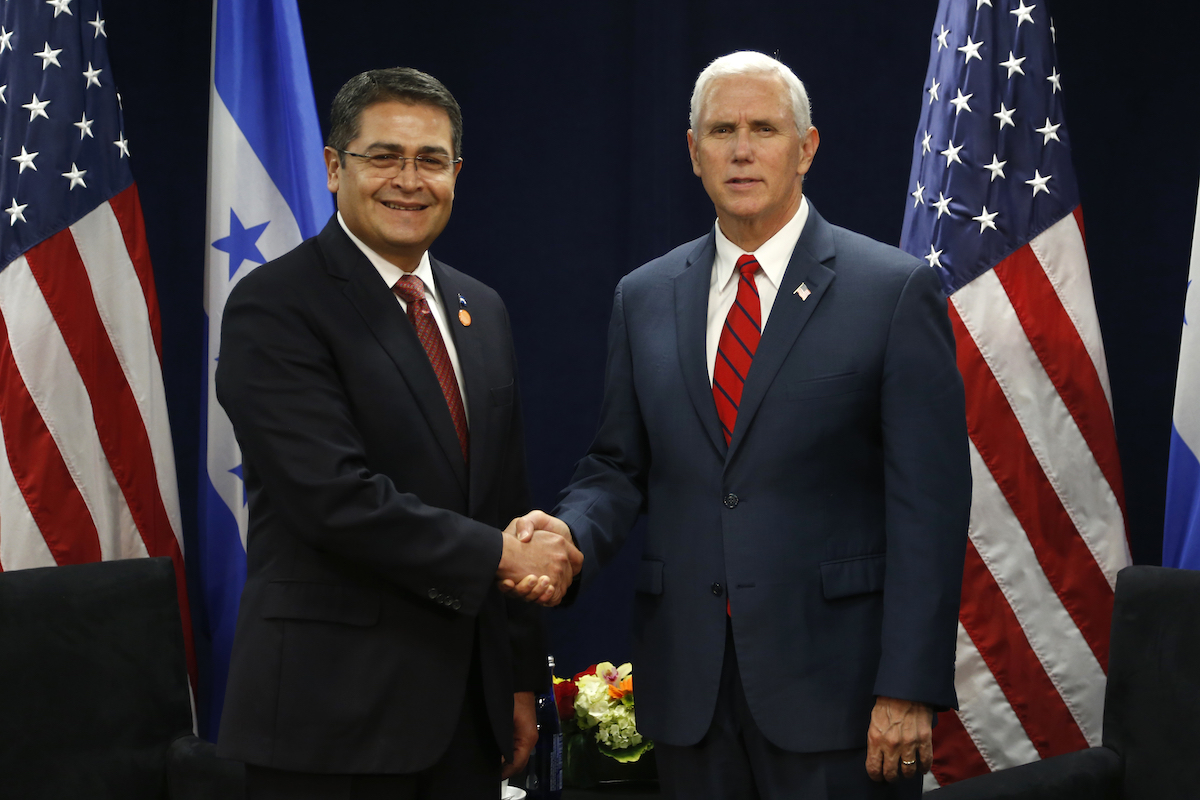 TEGUCIGALPA, Honduras (AP) — In a closet-sized underground hip-hop studio in one of the deadliest neighborhoods in Honduras’ capital, Leonardo Sierra believes nothing will change in his country until the United States decides it should.

In the 28-year-old’s assessment, it is Washington —fearing a leftist alternative in this Central American country important to U.S. drug and migration policy— that is keeping unpopular President Juan Orlando Hernández propped up even as U.S. prosecutors call him a co-conspirator in his brother’s drug-trafficking case and protesters call for him to step down.

From the depths of Tegucigalpa’s gang-controlled La Travesía neighborhood to the halls of the nation’s congress, Hondurans wonder how long the U.S. government can stick with Hernández. While their president jets off to Washington for meetings and photo ops, average Hondurans are glued to the slow drip of revelations coming from a federal courthouse in Manhattan.

Hernández has said the allegations in the U.S. come from drug traffickers seeking revenge against him, but U.S. prosecutors promise will provide evidence in a trial scheduled for October showing that Hernández harnessed his brother’s drug-trafficking connections to propel his own political fortunes.

“Particularly in this country the influence of the United States is decisive,” said Raúl Pineda Alvarado, a political analyst and former three-term congressman from Hernández’s National Party.

If the U.S. decides Hernández is more trouble than he is worth his days will be numbered; if it doesn’t, he could finish his term, Pineda said. Many Hondurans still cite the U.S. government’s decision to not pressure for the restoration of left-leaning President Manuel Zelaya when he was ousted in a 2009 coup as a demonstration of its role as kingmaker in Honduras. 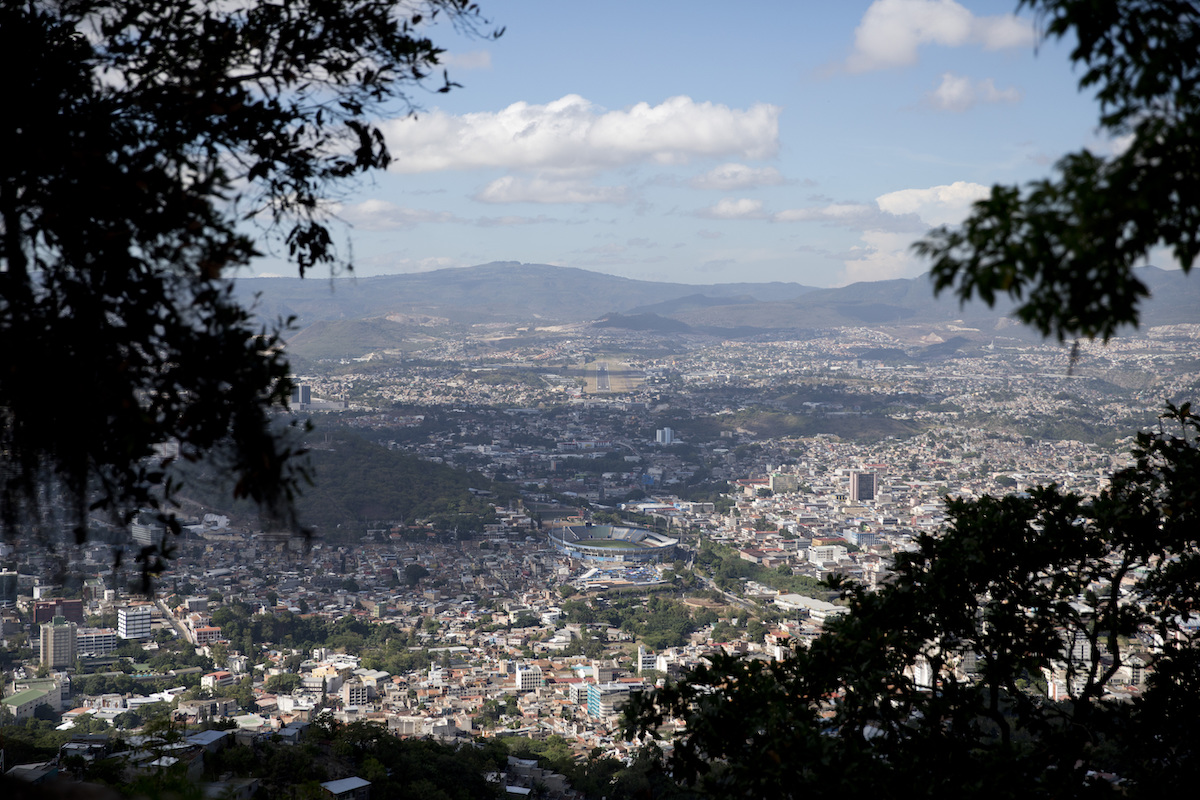 The State Department said in a response to written questions that the naming of Hernández as a co-conspirator by federal prosecutors did not constitute criminal charges. “Conversations with current heads of state are a routine part of diplomacy,” its statement added. “We have a range of diplomatic issues that are important to address for the benefit of both our countries.”

In the past year, President Donald Trump has repeatedly bashed the Honduran government for not doing more to keep its people from migrating. He suspended some aid and the U.S. continues to pressure Honduras to at least make it more difficult for migrants from other countries to cross its territory even if it can’t stop its own from leaving.

But Honduras remains a critical, if inconsistent, ally in the drug war. And, ironically, the extradition of drug capos to the U.S. under Hernández could have helped build the case against his brother.

Hernández points to the two dozen drug traffickers extradited to the U.S. under his administration as proof that he was not working with them. He did not grant an interview request.

Three days after Hernández was labeled a co-conspirator last month, the top U.S. diplomat in Honduras tweeted that he had met with Hernández “to reaffirm the collaboration and cooperation between the U.S. and Honduras on important bilateral issues.”

Hernández included that tweet in a press release defending himself.

A survey by pollster CID/Gallup conducted May 6 -14 said 64% of Hondurans disapproved of Hernández’s performance in office. It said the poll had a margin of error of three percentage points.

Hernández has suffered a credibility crisis since Honduras’ Supreme Court cleared the way for his re-election despite a constitutional ban. His subsequent 2017 election win was marred by irregularities. The dissatisfaction has increased even though the economy has grown moderately and Honduras’ homicide rate fell from a dizzyingly high 86.5 per 100,000 residents in 2011 to 41.4 last year.

Despite the improved numbers, the country remains among the world’s deadliest, is home to Latin America’s highest inequality rate and sees its citizens pouring out decrying systemic corruption, a lack of jobs and the hyper-violent gangs that maintain a stranglehold on many communities.

But Hernández’s party and allies control the congress and he holds the military’s support, enabling him to resist popular pressure to step down. Anti-Hernández protesters in June burned tires and barricaded key highways, clashed with security forces and ransacked stores. 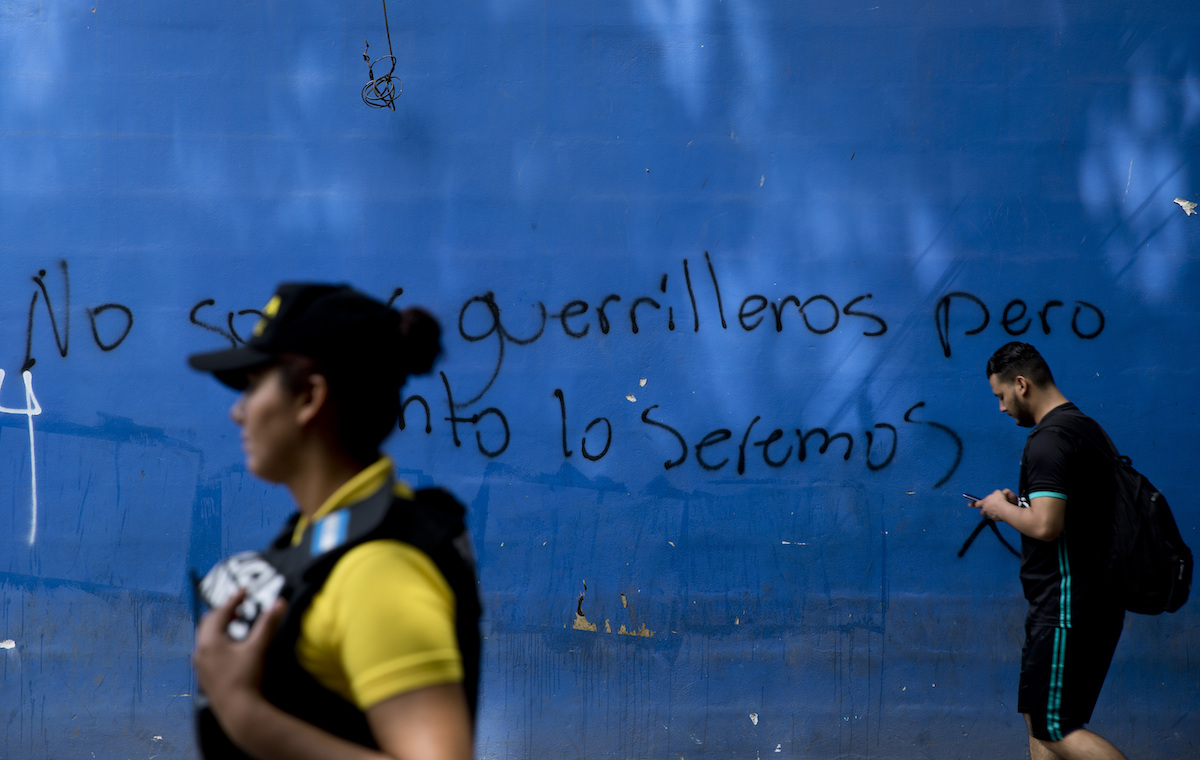 People pass in front of Spanish graffiti: “We are not guerrillas but soon we will be” in downtown Tegucigalpa, Honduras, Saturday, Aug. 24, 2019. (AP Photo/Eduardo Verdugo)

“Right now there is protest, there is a strong, solid, overwhelming rejection [of the president], but there isn’t the political component of the consent of the United States government,” said Pineda.

While Hernández stays in office, Hondurans will continue to flee the country, said former President Porfirio Lobo, his predecessor for the National Party.

“For Honduras to advance and move forward [Hernández] has to step aside,” at least while an investigation into the allegations proceeds, Lobo said.

Hondurans feel the U.S. is holding back out of fear of who could replace Hernández. It is not an unfounded concern considering that Lobo is also named a co-conspirator in the case against Hernández’s brother and that Zelaya has faced his own corruption allegations.

Salvador Nasralla, a well-known television sports commentator who ran on an anti-corruption platform, lost the November 2017 election to Hernández. Nasralla held the lead when officials said a computer glitch stopped vote counting. When it came back to life hours later, his lead quickly evaporated, causing many to suspect electoral fraud, something the government denies.

As an outsider candidate, Nasralla appealed to Hondurans fed up with the country’s traditional parties, but he also allied with Zelaya’s LIBRE party. That was a mistake, Nasralla says now, “because the main thing for the United States is that Honduras doesn’t have a leftist government.” 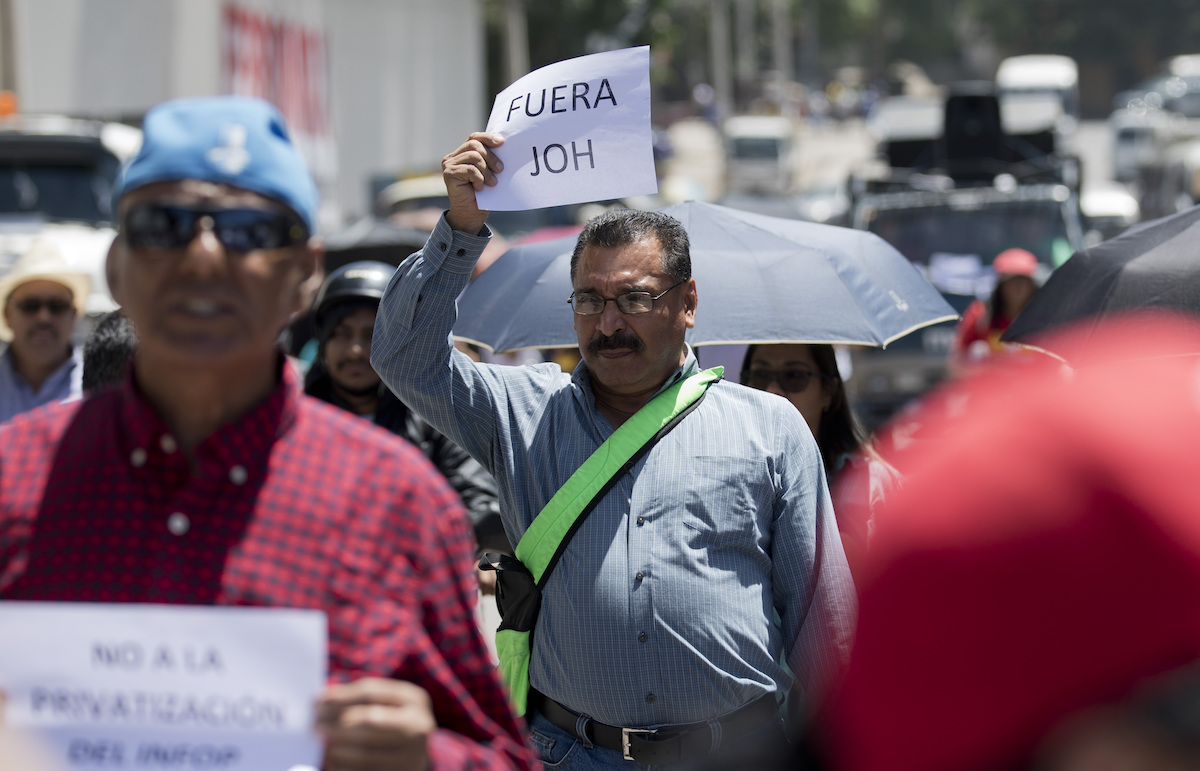 The U.S. government’s interests in Honduras start with battling drug trafficking. The country’s geography and weak institutions have made it a major transshipment point for South American cocaine. The U.S. Southern Command maintains close relationships with Honduras’ military brass and the U.S. military has an important presence at the Soto Cano Air Base north of Tegucigalpa.

There are important business interests here as well, starting with U.S. fruit companies whose historic presence and influence spurred the label “banana republic.” During June’s protests led by doctors, nurses and teachers, a convoy of several dozen tractor trailers hauling bananas for a Dole Food subsidiary was looted and set on fire.

“In the eyes of the people it generates a mild hopelessness because the people think it doesn’t matter how many protests we hold, it doesn’t matter how big they are. While the United States supports him we are not going to be able to get him out,” said Jorge Cálix, a lawmaker from Zelaya’s party who has declared himself a candidate for the 2019 presidential election.

Back in La Travesía, Sierra said his parents had him taken to the U.S. illegally when he was 11 and he lived in Tennessee until he was deported at age 19 nearly a decade ago. He still effortlessly slips into English with a southern twang.

The videos, albums and mix tapes he makes with friends at AKA Family Productions isn’t enough for them to live on now, but he hopes it can provide an alternative to crime or migration.

“In reality, politics isn’t going to change,” Sierra said. “The change is in us.”