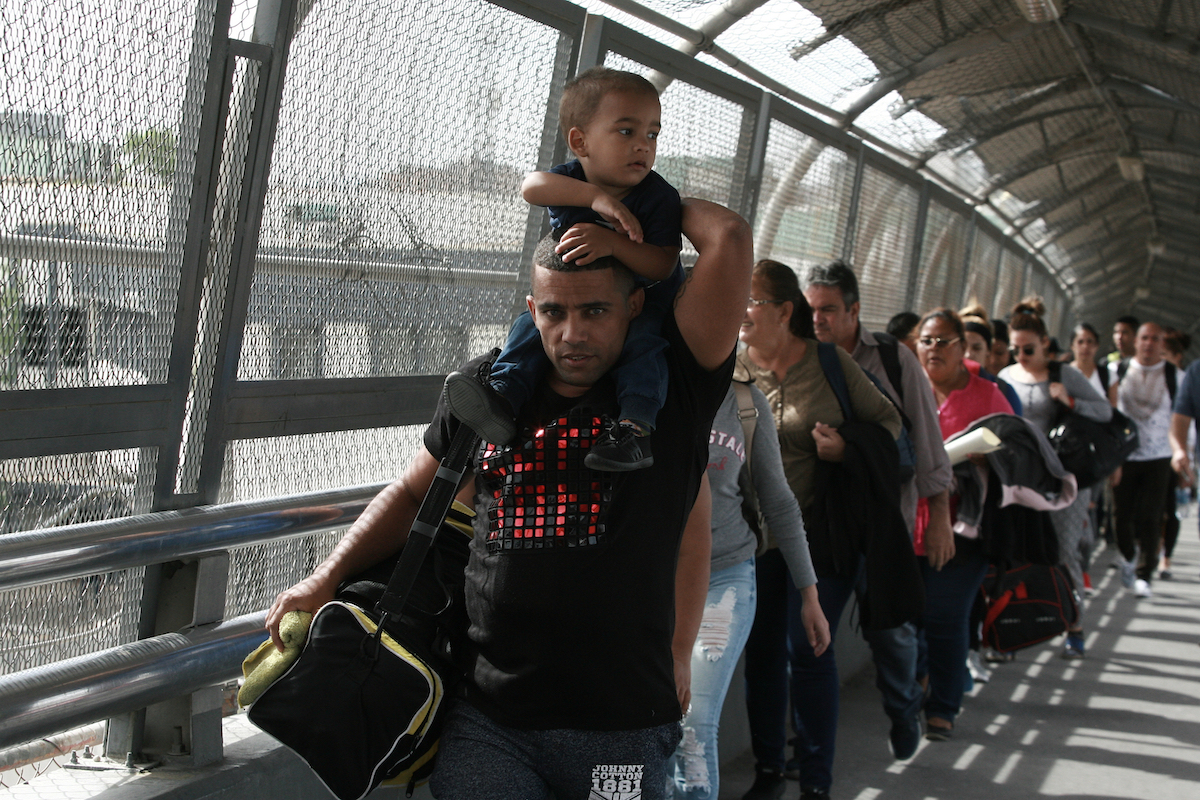 Cuban migrants are escorted by Mexican immigration officials as they cross the Paso del Norte International bridge to be processed as asylum seekers on the U.S. side of the border. (AP Photo/Christian Torres)

As an immigration attorney and advocate in the Trumpocalypse, it drives me insane to hear nonsense about the importance of upholding the law when this lawless Administration violates the law daily, hour by hour and minute by minute to harm immigrants and their families, friends and supporters. Welcome to my new column, “Today’s Fresh Hell in Immigration,” which aims to keep Latino Rebels readers updated on the big happenings along with what is going on behind the scenes in immigration.

I am currently involved in two federal court cases in Philadelphia (and there is another federal court case on the horizon) suing the Trump Administration for its “Migrant Protection Protocols” or “MPP” program, better known as “Remain in Mexico.” My co-counsel and I represent two fathers and their minor daughters, currently in detention in the United States, who are suing the government to prevent their relocation to Mexico while their asylum proceedings are underway.

Under the MPP program, the Trump Administration takes lawful asylum seekers from pretty much any Spanish-speaking country and dumps them on the streets of Mexico without shelter, protection, food, money, and frequently ID. From there, legal asylum seekers, who are NOT “ILLEGAL” in any sense of the word even though Acting USCIS Director Ken Cuccinnelli doesn’t seem to know this, have been raped, kidnapped, exploited, and assaulted while homeless and destitute on the streets of border towns.

Even though these vulnerable asylum seekers can request to be taken out of the program based on their fear, CBP officers have returned people to Mexico who had already been raped, kidnapped, or assaulted, and some of those returned after their fear have subsequently been the victims of kidnapping, rape, assault and other violence.

The Trump Administration, which likes to abuse lawful asylum seekers in order to deter them from seeking safe refuge, has been banning observers from the immigration court proceedings which are being held in tent immigration “courts” at the border.

#remaininmexico hearings begin in Laredo today. After a lot of back and forth with ICE, I wasn’t allowed into court because I don’t have a client with a hearing today. Confusion abounds inside, even with how to get into court. pic.twitter.com/RHLtamBIJ7

The “Remain in Mexico” policy violates United States treaty obligations (of non-refoulement), the Immigration and Nationality Act, and more. Meanwhile, asylum seekers are those actually acting in accordance with the laws of this country.

I do believe that President Trump has one superpower—branding and marketing. So he has made the public believe, through repeating lies, that we are in a time of crisis at the southern border, when in fact, our southern border apprehensions were at near 30-year record lows. They have actually skyrocketed since Trump took office to levels that we haven’t seen since before the Obama presidency, driven by violence in Central America, the collapse of Venezuela, bad U.S. foreign policy, record displacement of people worldwide, and the climate crisis. Clearly, Trump’s immigration policy is a disaster even through the lens of his supporters, who want to see fewer immigrants of all kinds (see tomorrow’s column on the Trump Administration’s attack on legal migration).

Our country adopted the asylum laws in the aftermath of World War II, in which my Mexican American grandfather and his brother served, to make amends for the refugees that we returned to their deaths in the Holocaust, including children. I have colleagues whose asylum-seeking clients begged immigration judges for their lives, only to be returned to their countries of origin and subsequently murdered.

We can and should be better than this as a nation. We cannot allow this narcissistic President who doesn’t care about immigration (after all, he regularly hires immigrants in violation of the law and married a couple of them, bringing their family members in so-called “chain migration,” a nonsense phrase that means legal immigration) to take a wrecking ball to the system of laws that we have developed to protect the vulnerable and keep them safe from harm.

Amy Maldonado is usually a calm, mature immigration attorney with a reputation within her professional community for her reasonableness (seriously). She tweets from @AmyMaldonadoLaw.