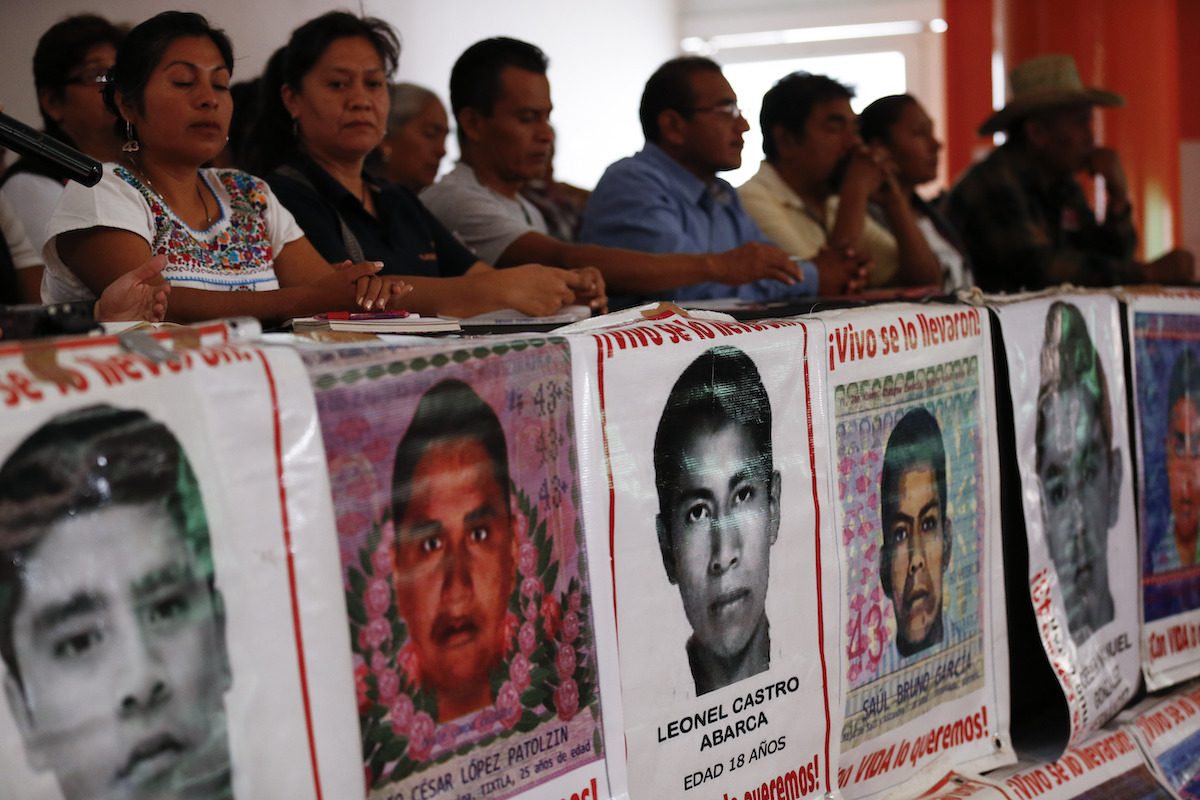 Parents of some of the 43 missing teacher’s college students sit behind posters depicting their missing loved ones, during a press conference following a private meeting they had with President Andrés Manuel López Obrador, in Mexico City, Wednesday, Sept. 11, 2019. (AP Photo/Rebecca Blackwell)

MEXICO CITY (AP) — Courts have exonerated another 24 people implicated in one of the country’s most notorious crimes, the disappearance of 43 students, a federal official said Sunday.

The Interior Secretary said that 21 of the detainees were freed the previous evening after courts found various violations of due process in their cases, including torture and arbitrary detention. Three remained behind bars on other charges.

Deputy Interior Secretary Alejandro Encinas criticized the decision, calling it a “mockery of justice” which encouraged “silence, complicity and impunity.”

It shows “the misery, the rot in which the justice system of our country finds itself,” he said.

Seventy-four of the 142 people arrested in the case have now been freed, according to an updated statistic released by the Interior Secretary on Sunday afternoon. Nobody has yet been convicted.

Authorities say leftist students from the Ayotzinapa teacher’s school were abducted by police in the Guerrero state town of Iguala in September 2014 and handed over to the drug gang Guerreros Unidos headed by Gildardo López Astudillo, who was freed earlier this month.

Jesús Murillo Karam, attorney general under President Enrique Peña Nieto, infamously announced the “historic truth” about the students’ disappearance—that they were killed and their bodies incinerated at a garbage dump.

But independent experts said there was no evidence to support the conclusion that the bodies had been burned there and a team backed by the Organization of American States said Mexican investigators had overlooked other possibilities, including military involvement.

Parents of the disappeared have asked President Andrés Manuel López Obrador to initiate criminal proceedings against officials, ramp up collaboration between prosecutors and a truth commission, and require the army to answer more than 100 unanswered questions.

On Saturday night, Mexico’s Attorney General’s Office issued a statement saying it was ready to use “all the resources and proposed proceedings that are necessary to hold responsible those who have, during the entire criminal course, failed to fulfill their duties.”

Since 2015, judicial authorities have said there is not enough evidence to hold a trial.