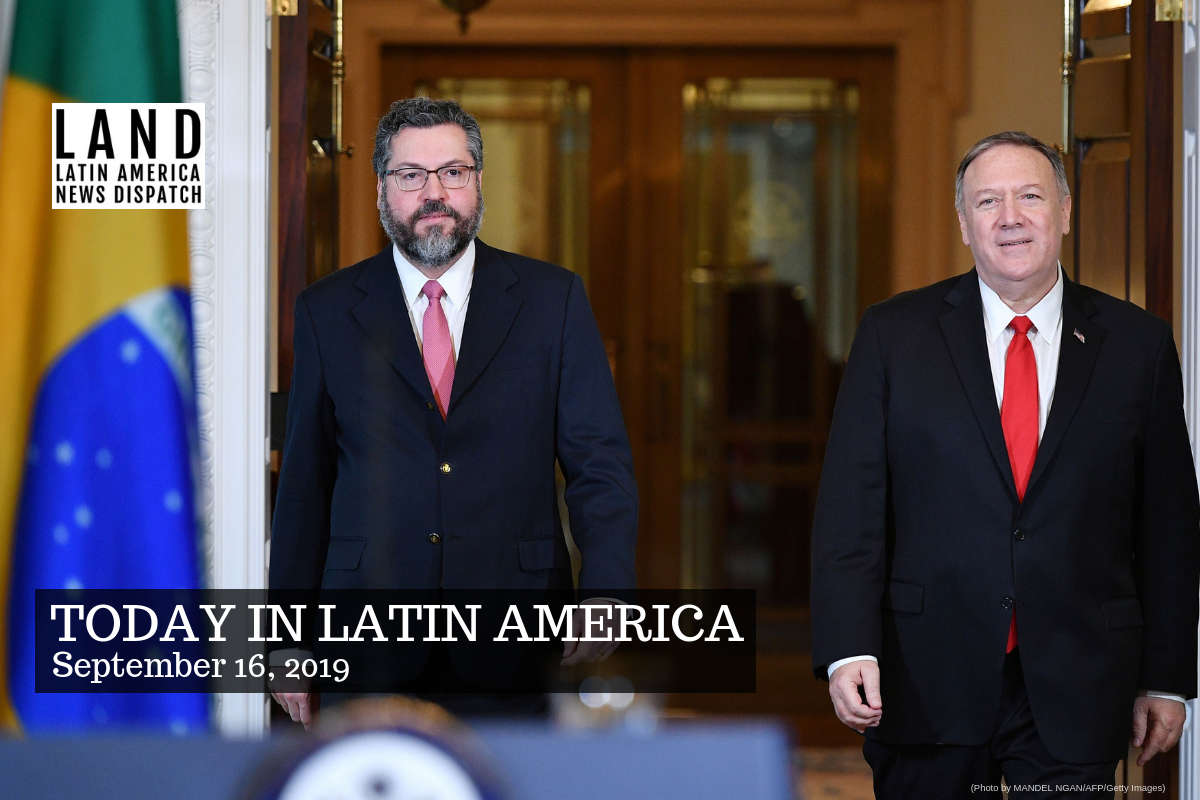 US Secretary of State Mike Pompeo (R) and Brazilian Foreign Minister Ernesto Araujo speak to the press following a meeting at the State Department in Washington, DC on September 13, 2019. (Photo by Mandel Ngan/AFP/Getty Images)

BRAZIL: The United States and Brazil held their first high-level strategic dialogue in seven years on Friday. Brazilian Foreign Minister Ernesto Araujo represented Brazil in the talks with U.S. Secretary of State Mike Pompeo. Pompeo commended Brazil for supporting Israel and the opposition party in Venezuela. Araujo said the talks would result in “economic growth, security and development in the Amazon.”

After the meeting, U.S. Secretary of State Mike Pompeo announced that both countries agreed to increase trade and invest in biodiversity in the Amazon. Araujo plans to address the United Nations at this year’s General Assembly and told reporters he had discussed a potential free trade agreement with U.S. Trade Representative Robert Lighthizer and Commerce Secretary Wilbur Ross.

COLOMBIA: Colombia’s Special Peace Jurisdiction announced that the rebels Jesús Santrich and El Paisa have been expelled from the transitional justice system and will lose protections guaranteed by the peace accord. Santrich and El Paisa participated in a video calling for war against Colombia’s government and could be extradited now that they have broken the agreements of the country’s peace deal.

BOLIVIA: Bolivia’s Supreme Electoral Tribunal, the country’s highest electoral court, has threatened sanctions against the Higher University of San Andreas. The university published a survey that shows President Evo Morales polling significantly below the percentage he will need for reelection at this year’s Oct. 20 elections. The survey has Morales polling at 31.1% (the minimum Morales will require for reelection is 40%). The Tribunal announced that the survey was “invalid,” but did not indicate what rules the university had broken. Constitutional lawyer Iván Lima told Bolivian media that the Tribunal may be referring to the law that polls cannot be funded by public institutions.

VENEZUELA: Opposition leader Juan Guaidó responded to accusations this week as photographs of him posing with Colombian gang members surfaced on social media. The photographs show Guaidó with members of the Rastrojos on Feb. 22, when he visited Colombia for a concert to raise aid money for Venezuela. President Nicolás Maduro’s administration has said that the photographs prove Guaidó conspired with the Rastrojos. Meanwhile, Guaidó told Colombia’s BLU radio, “That day I took photos with many people. Evidently it’s hard to know who is asking you for a photo.”

DOMINICAN REPUBLIC: Dominican officials announced new safety measures on Thursday after at least 10 American tourists died in several resorts on the island. Dominican Republic’s Minister of Tourism Francisco Javier García, who spoke at an event in New York, said a National Committee of Tourism Security has been established by the government to develop strategies to detect and prevent threats. The minister also said they have reinforced rules that now require emergency information in every room and have expanded security forces.

PUERTO RICO: Civic groups in Puerto Rico are urging the U.S. Senate to approve $10 million for the clean up of Puerto Rico’s most hazardous waste site. The amendment, approved by the House of Representatives in July, is part of the National Defense Authorization Act of 2020. Rep. Alexandria Ocasio-Cortez (D-NY) helped propel the language through Congress. The money would be used to facilitate “closed detonations” of hazardous munitions that are still stored by the U.S. Navy on the island of Vieques. A recent change.org petition calls on the Navy to “stop poisoning the people of Vieques, Puerto Rico.”

NICARAGUA: The Nicaraguan government banned seven officials from the Organization of American States on Saturday who were scheduled to arrive in Managua. The diplomats were set to travel to the country to try to dialogue with Nicaraguan President Daniel Ortega to address the country’s ongoing political crisis. Unrest in Nicaragua began in 2018, and hundreds have been killed in government crackdowns.

UNITED STATES: Protesters blocked traffic near the 5th Avenue Microsoft store in Manhattan on Saturday to call out the company’s contracts with Immigration and Customs Enforcement (ICE). Seventy-six people were arrested during the protest, which was organized by the Close the Camps coalition. The store was closed for the rest of the day. Microsoft has a $19.4 million contract with ICE that supports artificial intelligence and data processing technology. Those inside Microsoft have even protested the deal, with over 100 employees signing an open letter in June 2018. The company’s CEO Satya Nadella said that Microsoft does not work on any projects with ICE related to separating children at the border.

MEXICO: A judge freed 24 suspects in the Ayotzinapa case on Saturday night, after he determined that the suspects’ due process rights were violated. Deputy Interior Secretary Alejandro Encinas gave a press conference on Sunday, calling the decision a “mockery of justice.” Encinas says the Attorney General’s Office will investigate any illegal actions by officials and judges in the Ayotzinapa case. Approaching the five-year anniversary, no one has been charged for the forced disappearance of the 43 Ayotzinapa teachers college students on Sept. 26, 2014.

MEXICO: Mexican President Andrés Manuel López Obrador sent the proposal for an Amnesty Law to Congress yesterday. The law would provide amnesty for certain non-violent crimes, including low-level drug trafficking and women who were jailed for having miscarriages. López Obrador promised to turn away from the punitive measures adopted during the Drug War during his 2018 campaign. The amnesty deal will not apply to violent crimes such as murder, kidnapping and any crime involving firearms.