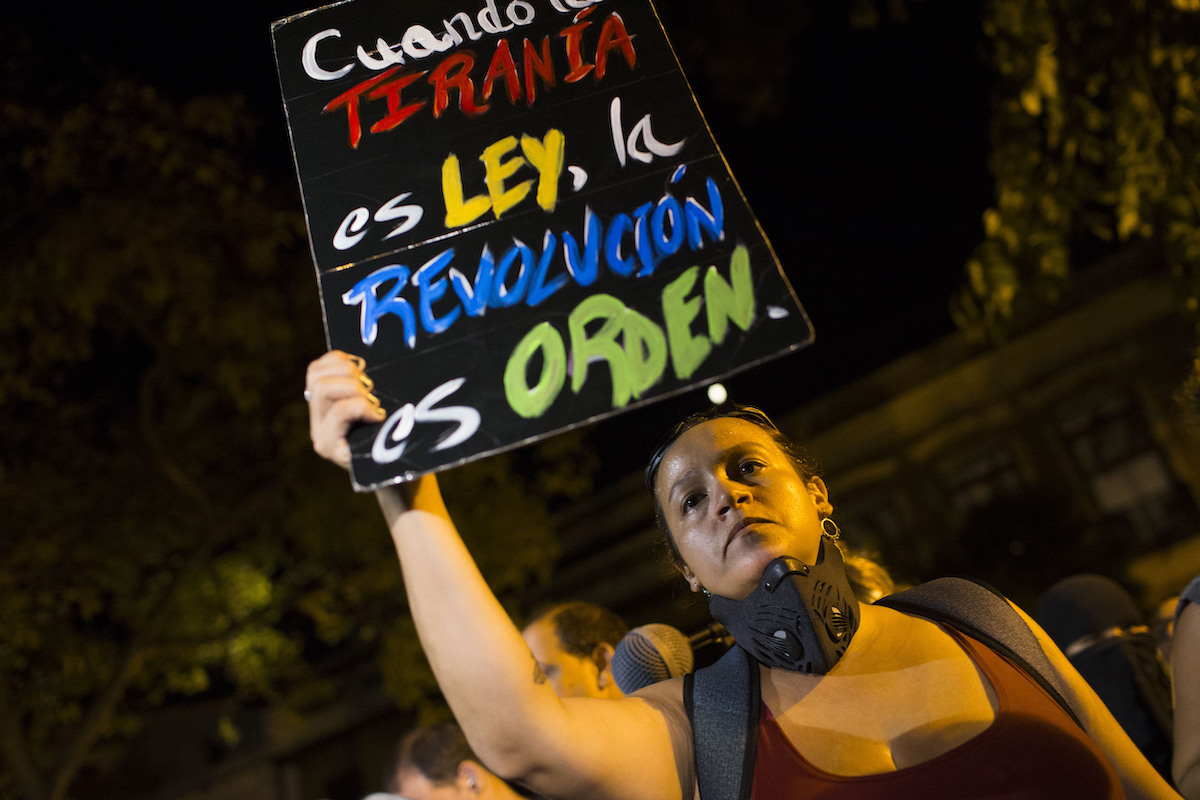 A woman holds a sign with message that reads in Spanish: “When tyranny is the law, a revolution is in order” during a protest outside the governor’s residence, the Fortaleza, after Pedro Pierluisi was sworn in as Puerto Rico’s governor, in San Juan, Puerto Rico, Friday, Aug. 2, 2019. (AP Photo/Dennis M. Rivera Pichardo)

Plus ça change, plus c’est la même chose. It was 1849 when French journalist Jean-Baptiste Alphonse Karr wrote this epigram. In 2019, it fits Puerto Rico like made to order leg irons, as if Macondo’s Melquiades had condemned the island to a time that flows, stops and reverses. And nothing is as it seems.

After an exceptional summer, during which massive civil protests ousted pro-statehood Governor Ricardo Rosselló, the Ancien Regime, like Rasputin, refuses to die. Instead, it spins the truth and mutates—right back into itself.

The New Progressive Party (PNP) rid itself of Rosselló like a syphilitic rash, and disregarding the message delivered via pots, ladles and song, stuffed its wolves in sheep’s vestments and sent out its Handmaiden, now governor Wanda Vázquez, to spread the gospel:  We are not the same as Ricky. We are the “New Government.” 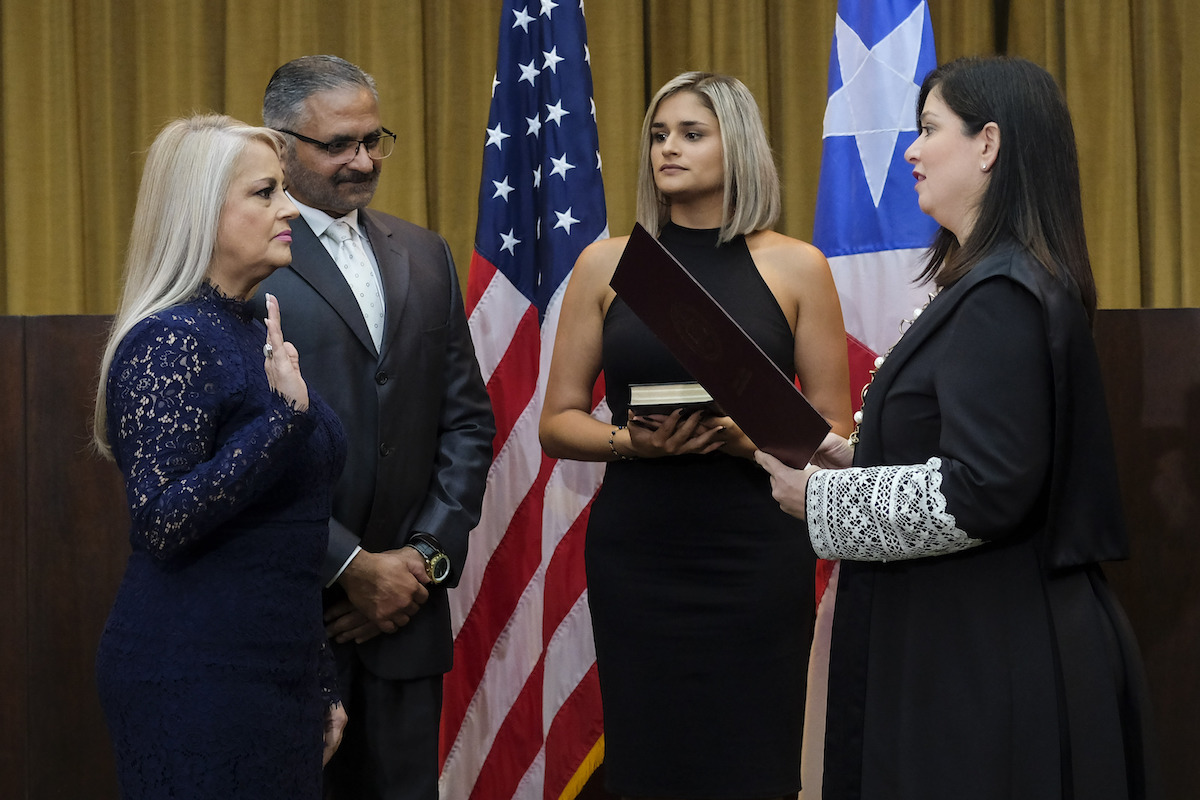 Sure, and there is a bridge in Brooklyn on sale, in mint condition. The truth behind all the pretense —the cupula of the PNP is fighting like a cat on its back for its life— is both in Puerto Rico and Washington.

“We are in the process of the Old Regime trying to wash their face. The only way they can maintain the status quo is to pretend they represent something else,” said San Juan Mayor Carmen Yulín Cruz, who is running for governor under the umbrella of the opposition Popular Democratic Party (PPD).

“I do not think we are at the end of anything structurally. This government is exactly the same as the other one. It’s a little bit more refined and she [Wanda Vázquez] can conceal herself, the governor, behind the veil que that ‘I am not political,” when in fact she is, “ Yulín Cruz added. “But what they represent is the new version of the status quo.” 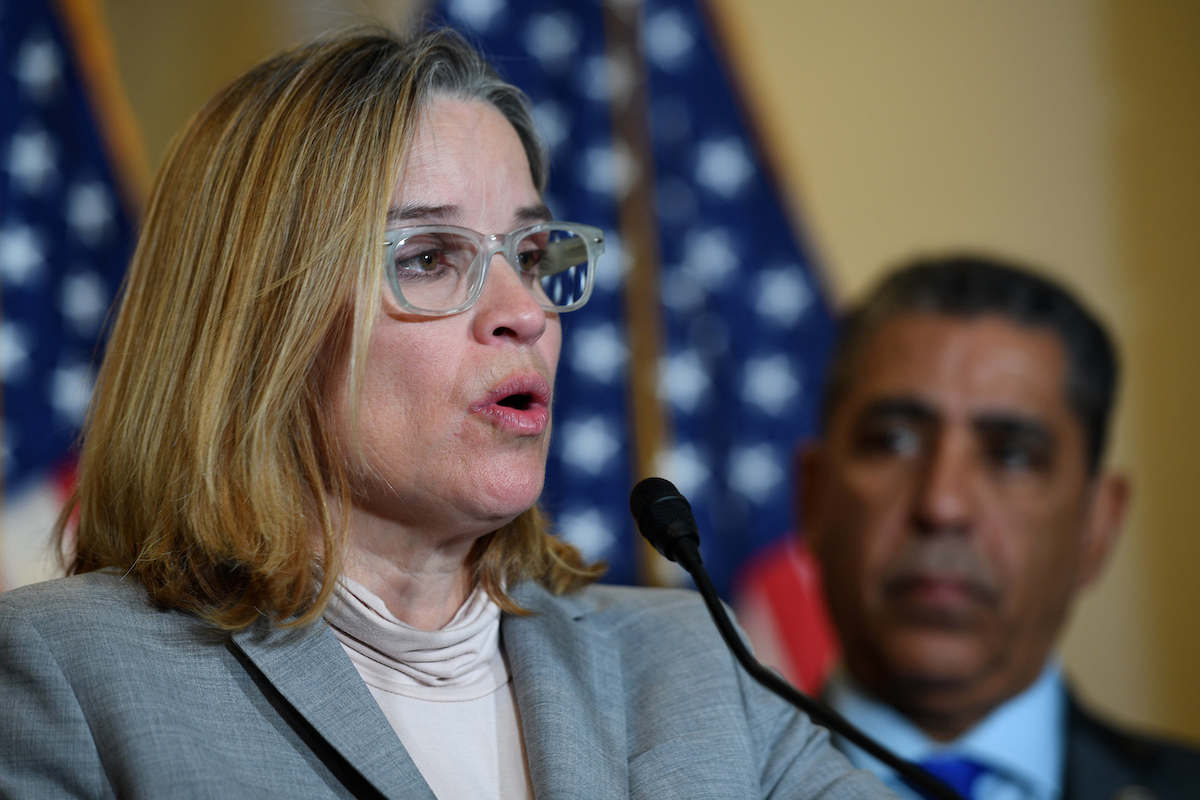 The rosary of disasters that drove 3.5% of the island’s population to the streets of San Juan include a prolonged recession, Hurricane Irma and María, almost 3,000 dead, an unscrupulous debt, La Junta and a bitter colonial truth: Washington could give a right royal toss about the island.

But, it was #RickyRenuncia that lit the fire that brought #cacerolagirl out in full force, and, almost two years after María devastated the island, gave the Puerto Rican people hope for change. A revolution, of sorts.

In chat sites such as Telegram, Rosselló, together with his band of “brothers,” presided over a slew of crude, sexist and homophobic messages that made fun of the poor, the disabled, mocked the dead of María and revealed the utter contempt of the ruling political class towards the Puerto Rican people.

“To talk about a revolution is premature. What happened here was incredible because people just got fed up. The chat and everything that happened after the chat was the detonator for the people to say I am not going to take it anymore, ” said Sandra Cotto Rodríguez, journalist and blogger, who was one of the first to disclose the chats. 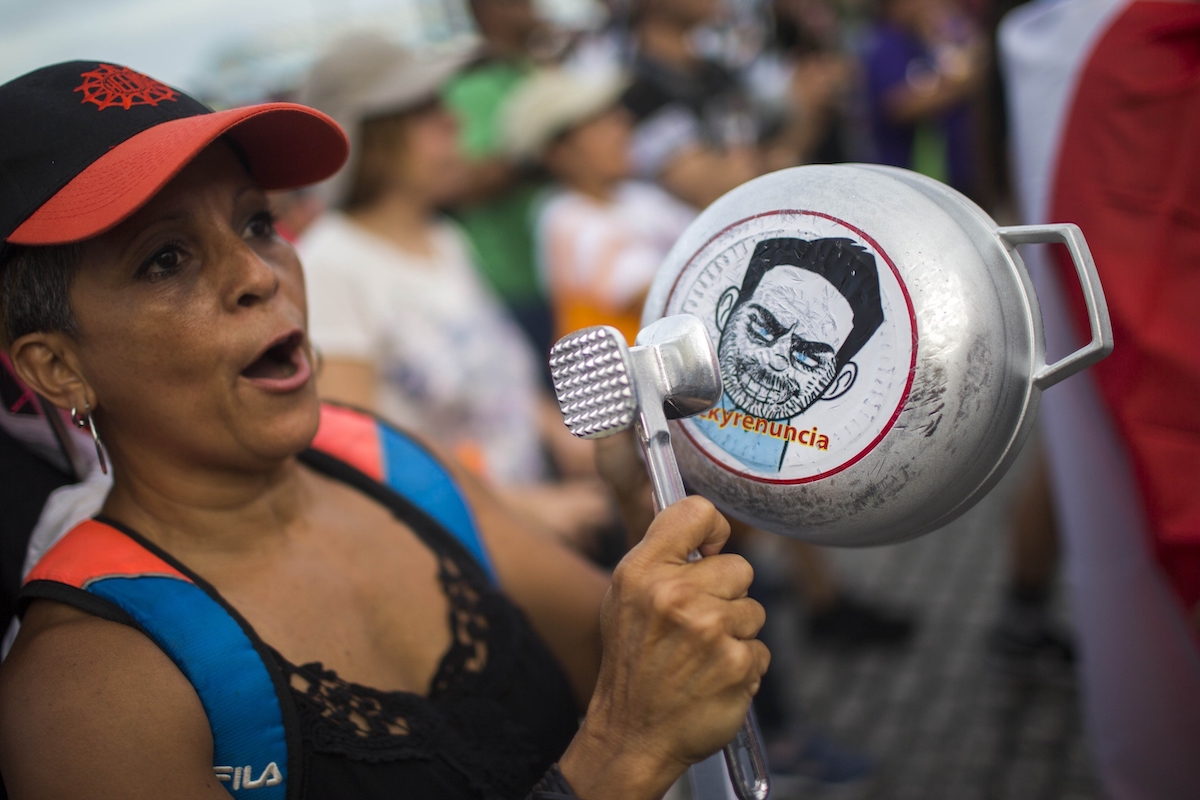 In this July 19, 2019 file photo, a demonstrator bangs on a pot that has a cartoon drawing of Governor Ricardo Rosselló and text the reads in Spanish “Ricky Resign” in San Juan, Puerto Rico. (AP Photo/ Dennis M. Rivera Pichardo, File)

“When they saw the chat, people said, hey, wait a minute. You didn’t help me, I am living under this blue tarp, you made fun of me because I am gay, or a woman, or poor, or simply because someone of mine died and you said let them die and be eaten. It was organic, people got up, got tired and everyone just erupted. That is what happened,” she said.

But, did Rosselló spark a revolution, of sorts? Or is it premature to call it thus?

“To me what revolution signifies is a demand for systemic change, and that doesn’t happen overnight. That clearly was the demand of why people took to the streets in record numbers,” said Melissa Mark-Viverito, the former Speaker of the New York City Council who is now running for Congress.

“Because there was this corruption, this administration and this government and the way it is set up, regardless of parties, but the way it is structured, does not have us as the center, right? And does not have our interests as the center, and that has to change. That is the message I heard loud and clear. “Now, what happens from here to next year when the elections are happening, now that is the question.” she added. 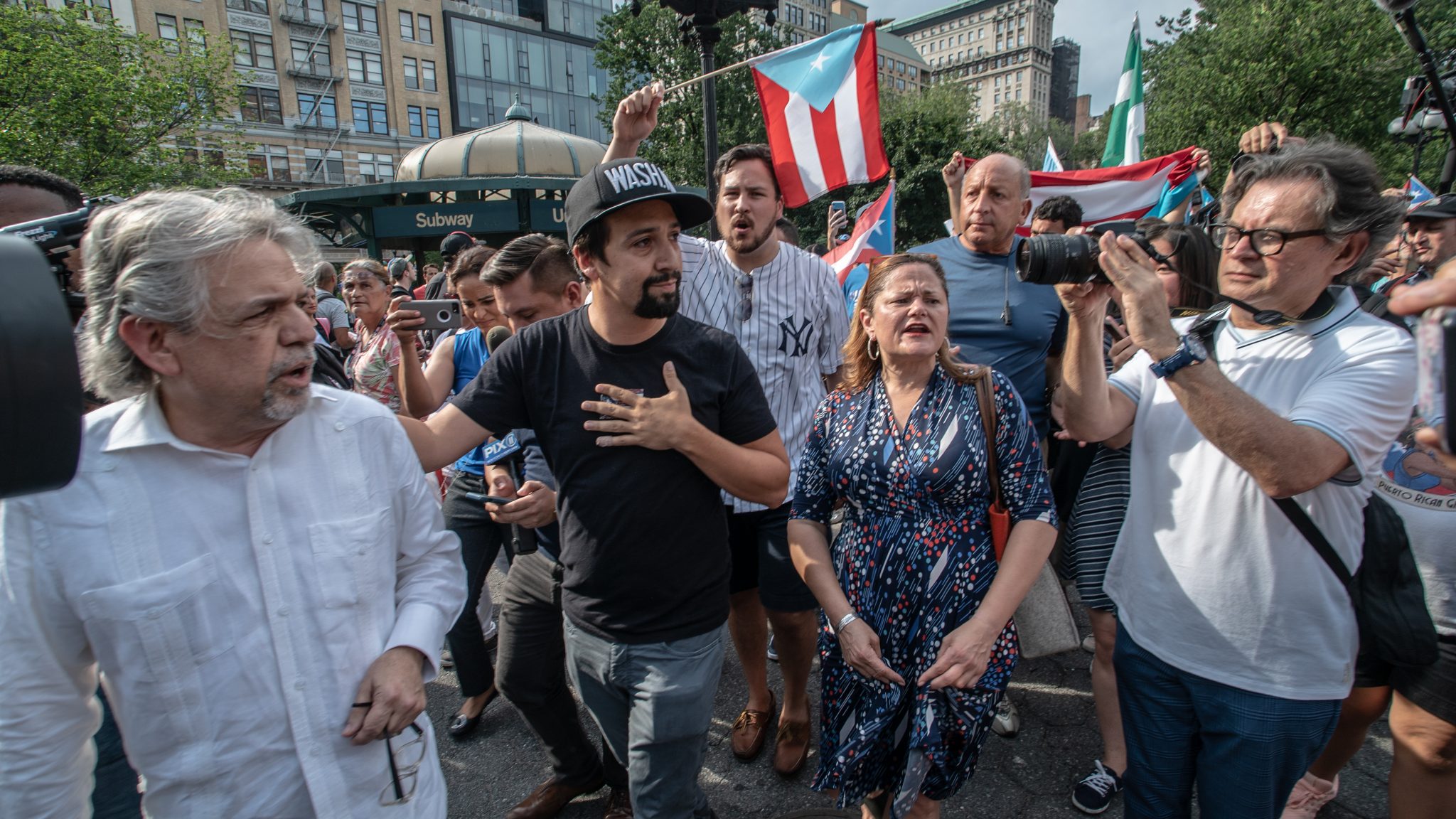 To Yulín Cruz, the protests were a clear indication of what people don’t want and that now they have to walk towards what they do want.

“It is clear that we don’t want something, we don’t want certain things. What is not clear is what we are willing to do on a day by day basis, to do the day by day work, the boring work, that leads to change,” she said. “There is a difference between lighting a fire, and keeping that fire lit. So we lit a fire, now we have to keep it.”

Yet what both parties (yes, you too, Populares) are banking on come election time, but especially the PNP elders, is that people, once things return to “normal,” will cease with demands for structural change. The Ancien Regime can oil itself back in with its core intact. No matter how u spin it, plus ça change.

And so we have Pedro “El Breve” Pierluisi, who came, usurped La Fortaleza like a common thief, and then had to flee less than a week later, announcing recently that he was considering running for governor. “Puerto Rico will progress with me at the helm,” he said at the time. Vanity, Pedro, vanity. 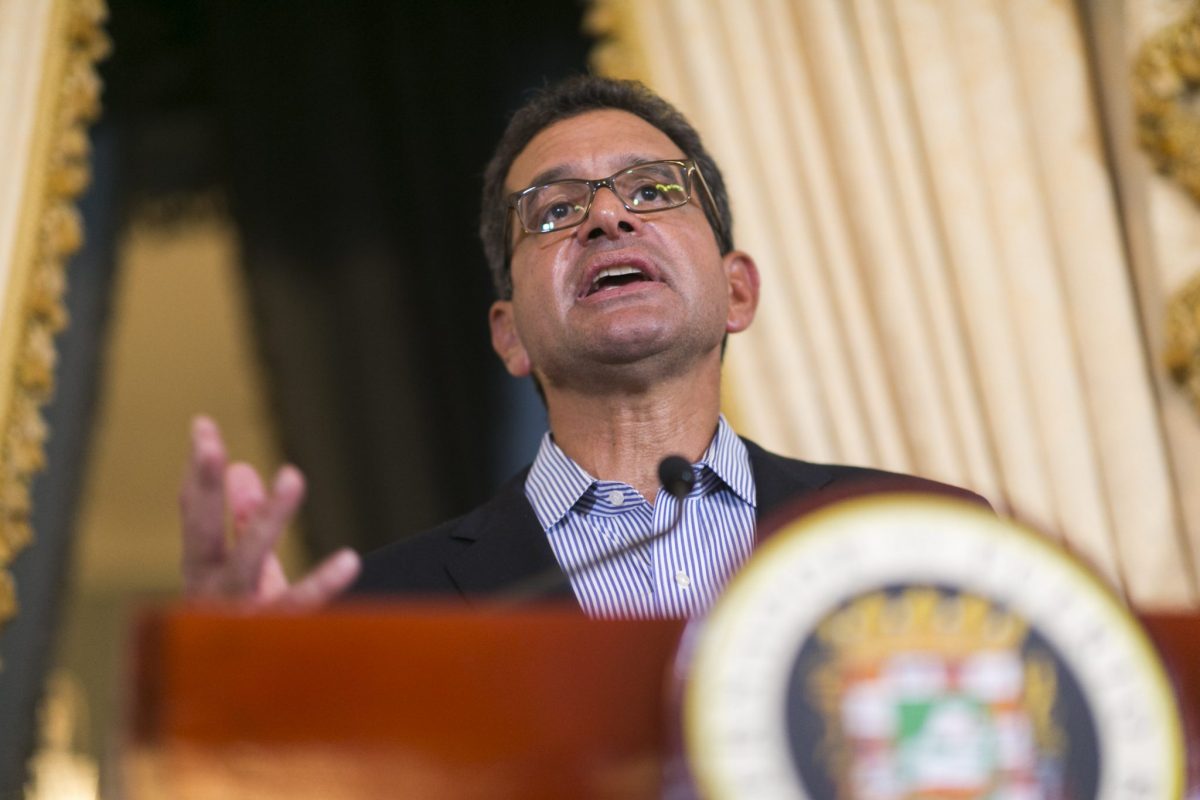 “But little by little [the Puerto Rican people] are awakening to the fact that they’re the same,” she explained.  “The people from the chat are the same, nothing fundamentally has changed, they [the PNP] never understood what the message of the summer of 2019 was. They think this was about Ricky, and it is not about Ricky. Ricky was the scapegoat. It is about all the policies that have taken place under the auspice of this administration and everyone that is in it. They don’t understand because for them everything is politics. Too much politics, not enough policy.”

“Right now there is too much fear in Puerto Rico, too much fear, because people are in a bad way, there is no work,” Rodríguez Cotto explained. “From now until December, this is going to be chaos. People are afraid, and sectors of the media [on the island] like El Nuevo Día and Univision, are heading the honeymoon campaign with the new governor, who is a liar.”

“There are people right now who have not been paid in three and four months, since June. They can’t pay their electricity bill because they have no money. They are waiting to see if something comes in,” she said. “Many things will happen in the coming months. The main media has allied itself, El Nuevo Día, Univision and other sectors, to continue the narrative of the lie that keeps people isolated.” 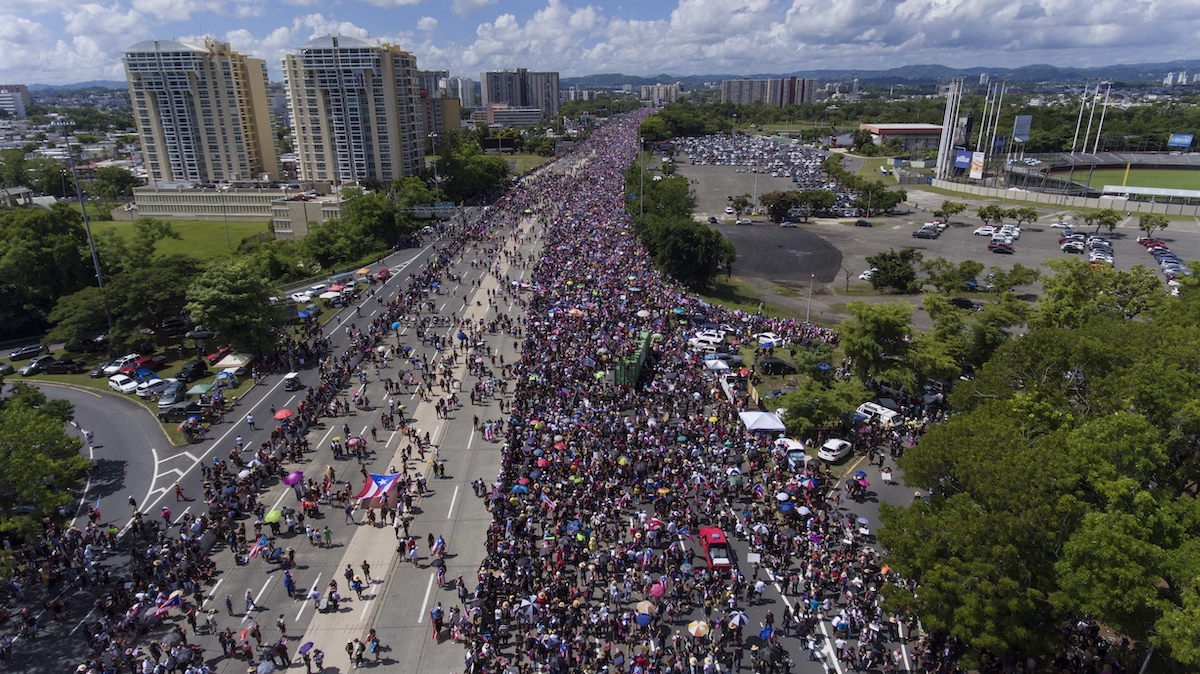 More importantly, if people want change, then how far are they willing to go?

Yet as Mark-Viverito sees it, if this revolution (of sorts) is going to lead to that kind of demand for change, people will have to leave their comfort zone and not vote for the status quo.

The hope is that #cacerolagirl is watching and waiting, pot and ladle in hand, ready to turn the epigram on its head.

One response to “To Revolution or Not to Revolution: Puerto Rico After #RickyRenuncia”