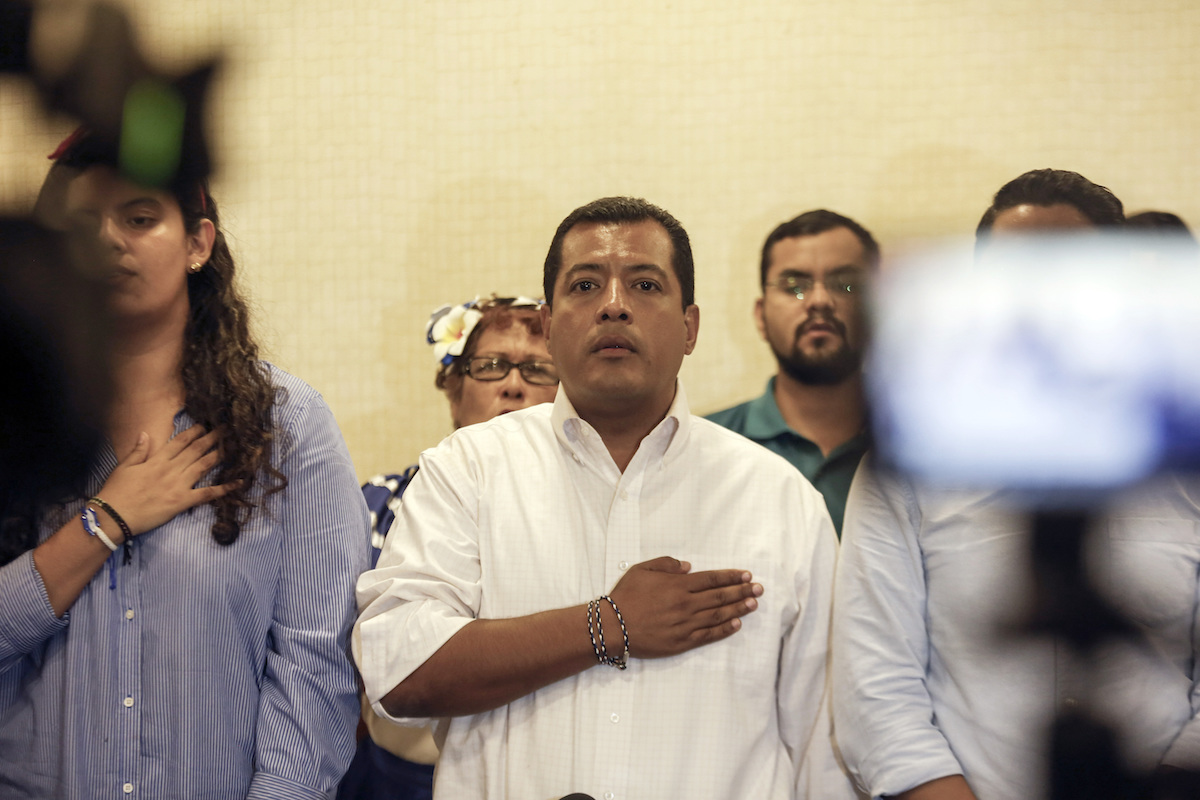 MANAGUA, Nicaragua (AP) — Opposition leader Félix Maradiaga said Thursday after returning to Nicaragua from 14 months in exile that he will not leave again, even though he believes President Daniel Ortega has imposed a “peace of the graveyard.”

In an interview with The Associated Press, the 43-year-old political scientist and academic said he intends to focus on organization and unity of the opposition movement, which has been unsuccessful in its attempts to get Ortega to leave office after protests and a deadly crackdown last year.

“I came to stay,” Maradiaga said, “and work from the grassroots.”

Maradiaga was director of the Institute for Strategic Studies and Public Policies, a non-governmental research and leadership training organization, when the government accused him of “financing terrorism” in the demonstrations which erupted in April 2018.

A judge ordered his arrest and he fled with his family to the United States. On Monday he flew to Nicaragua, where police waited at the airport but he was not detained.

He came back “to continue the civic struggle from within,” said Maradiaga, a leader of the Blue and White National Unity movement.

“I do not want the regime to manipulate my arrival to make people think that there is peace in Nicaragua, because what there is, is a peace of the graveyard,” Maradiaga said.

Thousands of Nicaraguans fled the country’s political crisis, during which 328 protesters were killed, over 2,000 wounded and hundreds jailed, according to the Inter-American Commission on Human Rights.

On Wednesday, Maradiaga said, he was followed on the streets of the capital, Managua, by five armed people on motorcycles whom he identified as “Ortega fanatics.”

“What they did to me today is just a sample of the terror that thousands of farmers are living in rural areas,” he said.

Maradiaga first went into exile at age 12 in the 1980s, a time when his family splintered between those who favored Ortega’s Sandinista party and those who opposed it.

“My options were either to join the ‘Contra’ [anti-Ortega rebel movement] or to join the army, so they sent me into exile,” Maradiaga said.

He crossed into the United States, spent time in a refugee camp and then was placed with a foster family, he said.

Maradiaga returned to Nicaragua in 1990 after Ortega was voted out of the presidency, though he subsequently went back to the U.S. to study at Yale and Harvard.

Speaking about the current crisis, Maradiaga insisted on the need for a peaceful solution.

“At no moment will we endorse an exit that considers violence as the alternative, since that only hurts the poorest,” he said.

As for the opposition’s demand that elections scheduled for 2021 be moved forward, Maradiaga called that a secondary issue and doubted that Ortega will ever agree.

“The fundamental thing is to re-establish freedoms and achieve a profound electoral reform,” he said. “If that is not achieved, early elections would not make any sense.”

He is to be part of an opposition delegation that will travel to meet next week with an Organization of American States commission that Ortega’s government barred from entering Nicaragua.

Maradiaga said international pressure is important, “but it will not save us.” He sees organization and unity as keys to avoiding what he called “another Venezuela.”

“We cannot repeat the errors of our Venezuelan brothers: focusing on individual leaders and strictly electoral plans,” Maradiaga said. Instead, he wants to see the opposition “working for unity, everyone pulling the cart in the same direction.”

Mentioned as a possible presidential candidate, he said he has not had time to think about that, and he believes the opposition should come to power under a transitional political leader, unlike the traditional presidential model.

“I have always been pessimistic about short-term solutions, and I truly believe that the road will not be easy, it will be long and narrow,” Maradiaga said. “The most likely scenario is that the elections will not be moved up and will be in 2021.”