Trump Closes Doors to Immigrants, Some US Citizens Open Them 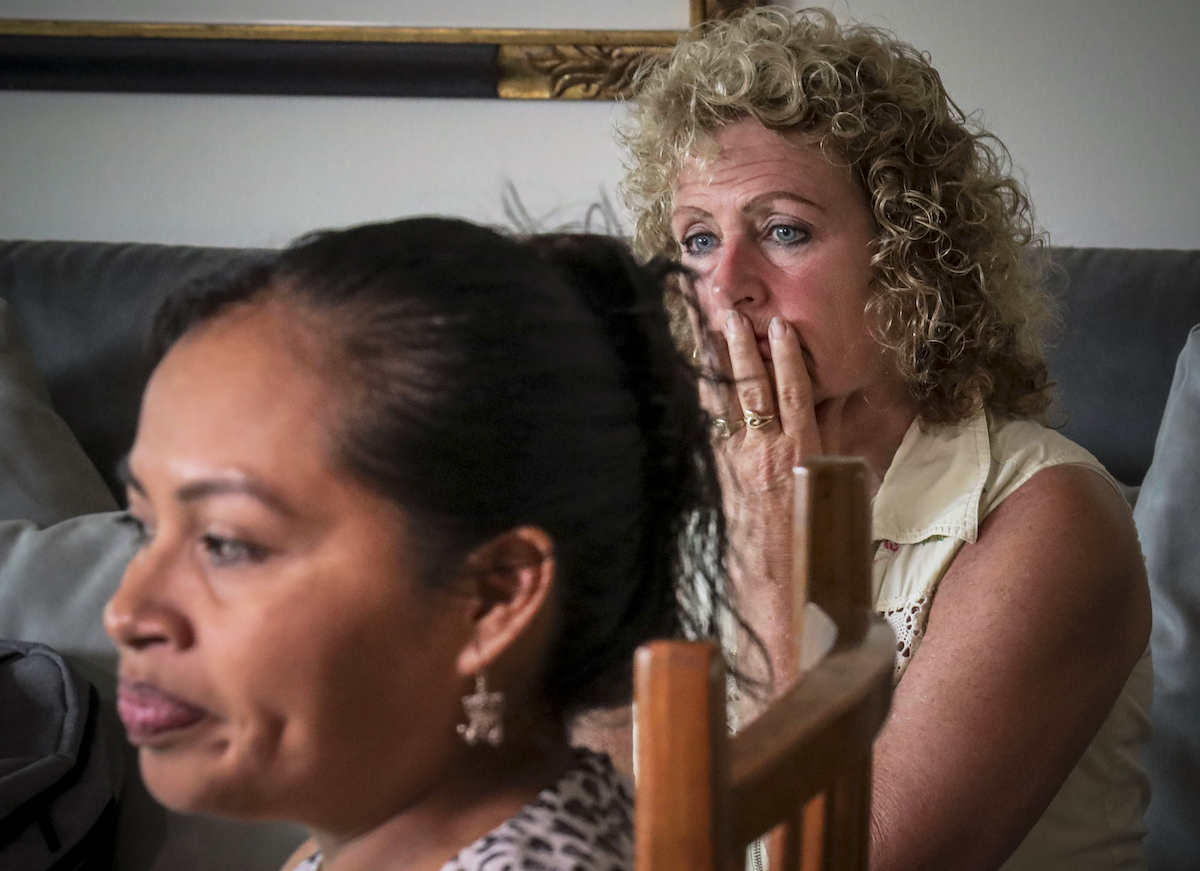 In this Wednesday, Aug. 21, 2019 photo, Vivien Tartter, right, listens as Guatemalan immigrant Rosayra Pablo Cruz speaks during an interview, in New York. Tartter opened the doors of her Manhattan apartment to Cruz and her sons who had been separated at a detention center in Colorado, reunited in New York and had no place to stay. (AP Photo/Bebeto Matthews)

So the 67-year-old psychology professor took action: She opened the doors of her Manhattan apartment to a Guatemalan family of three who had been separated at a detention center in Colorado, reunited in New York and had no place to stay.

“I wanted to help and I knew I could do this,” said the divorced empty-nester, who has housed them for a year.

Tartter is one more of a small but growing number of U.S. citizens who have picked up immigrants from detention centers, driven them to bus stations and doctor appointments, shared meals with them or hosted them at their homes, sometimes for one night, sometimes for a full year.

At a time when the nation seems starkly divided on who should be allowed to reside in the United States, hosts say they want to give these immigrants, many of them asylum seekers or refugees, a safe space, as well as respond to President Donald Trump’s tough stance on immigration.

Members of the Asylum Seekers Sponsorship Project, who are spread across the country, thought they would maybe find a dozen people willing to open their homes to strangers when the group was formed in the spring of 2018, shortly after a national debate broke out over a policy of separating migrant families arriving at the border. The group was surprised to see about 100 volunteers signing up the first two days, and now about 2,000 people have shown interest in hosting someone. The organization has so far placed asylum seekers with about 200 hosts. 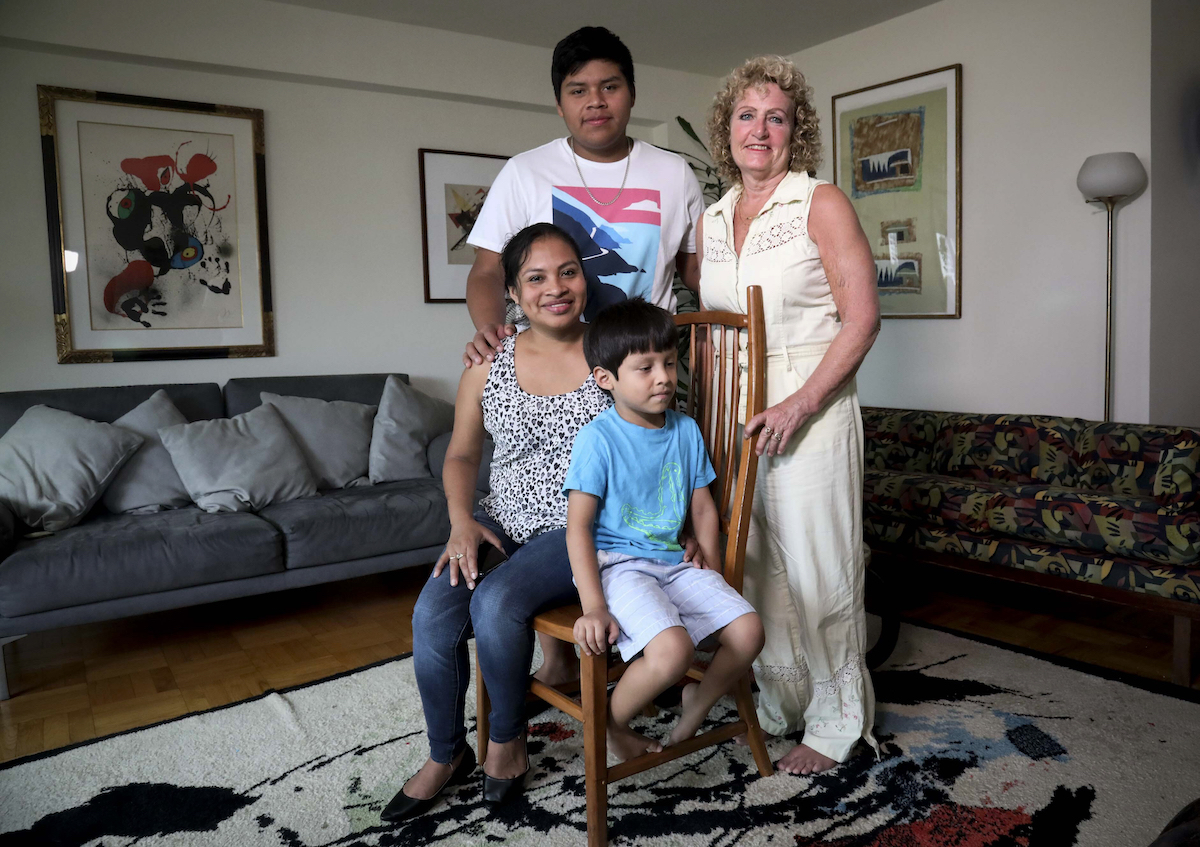 In this Wednesday, Aug. 21, 2019 photo, Guatemalan immigrant Rosayra Pablo Cruz, far left, and her sons Yordy, 17, and Fernando, 6, pose with their host Vivien Tartter, a college professor who opened her home to the family for a year, in New York. (AP Photo/Bebeto Matthews)

“Every time the Trump administration lashes out at immigrants, at migrants, at asylum seekers, we see more Americans outraged for that, looking for ways to relieve,” said Heather Cronk, a core team member of the group who lives in the Washington area.

About 800 people quickly signed up to volunteer to host somebody shortly after the nationwide organization Freedom for Immigrants launched its sponsorship program last year, said Christina Fialho, co-founder and executive director of the group. Now nearly 2,000 people have signed up, she said.

The group, based in California and with offices also in New York, Washington and Texas, says it has also collected $1.1 million from donors to post bond and get more than 230 immigrants out of custody so that they can stay with hosts, friends or family.

In New York, Tartter was connected to Guatemalan immigrant Rosayra Pablo Cruz by the group Immigrant Families Together.

She placed Pablo Cruz, who is 36, and her 6- and 17-year-old sons in two rooms on the lower floor of her duplex apartment. Tartter went from living alone with a cat to hearing “little bubbly children noise” downstairs, which she described as a “delight.” The aroma of Guatemalan “pepian,” a meat and vegetable stew, sometimes filled the air.

“I don’t know if I gave them more than what they gave me,” Tartter said.

Immigrant Families Together paid for the Pablo Cruz family’s food and transportation while they were at Tartter’s home.

The volunteer group First Friends also offers that sort of aid, as well as visiting immigrants in detention and offering a room for a night or two. Before Trump arrived at the White House, the New Jersey group had 50 or 60 people. It now has about 120, said Rosa Santana, the group’s program director.

An unprecedented surge of asylum-seeking families from Central America has overwhelmed U.S. authorities during Trump’s tenure.

Ken Cuccinelli, the acting head of U.S. Citizenship and Immigration Services, told The Associated Press last week that there is a backlog of about 335,000 asylum cases and more than half of that is over two years old.

Trump has made immigration a signature issue, pushing for tough restrictions on asylum—a stance that has pleased his supporters while rousing increasing sympathy for migrants among his critics.

A survey by the Pew Research Center published in January reported that 62% said immigrants strengthen the country “because of their hard work and talents,” while 28% said immigrants burden the country by taking jobs, housing and health care. The poll was based on telephone interviews of 1,505 adults conducted in mid-January 2019. It had a margin of error of three percentage points.

The process of becoming a host can be challenging. Not every host can communicate in Spanish, French or other languages, and the vetting process by some groups is rigorous. The international organization World Relief, for example, makes hosts go through a training process, background checks and in-home visits.

Many of the hosts are retirees, empty-nesters or people who work but have some time or space in their homes.

Some of those being hosted, like transgender immigrant Dulce Rivera, have a deportation order pending. Rivera, a Roma immigrant with no birth certificate or other identification documents, has lived for five months at the New Mexico trailer home of Jan Thompson, a former union official at a local university.

“It is humanity. You do it because it is the right thing to do,” said Thompson, who is 76 and met Rivera while she was in immigration detention. Rivera said she was expelled from her home as a child and isn’t sure where she was born. She said she lived in Spain, Uruguay, Honduras and Mexico before arriving to the U.S.

The host-an-immigrant movement irks many who favor limiting immigration.

William Gheen, president of the Americans for Legal Immigration PAC, said hosting immigrants is wrong because U.S. laws state that “illegals are to be deported and not be given aid or jobs.”

“U.S. citizens and national groups should not be helping fake asylum seeker illegal aliens to enter and remain in the U.S. to sway U.S. elections to the left using anti-Trump illegal Democrat non-citizen voters to counteract Republicans,” Gheen said.

Many of the immigrants are asylum seekers who have been granted temporary authorization to stay in the U.S.

In Los Angeles, Mila Marvizon and her husband responded to a social media request to host a youth who, according to his lawyer, couldn’t get a bond unless he had a sponsor.

“So I said, ‘I will be the sponsor, fine,'” said Marvizon, a 57-year-old former documentary TV producer who runs an eBay store. “We had to prove we were American citizens, prove we were financially able to support someone and that we would make sure he gets to all official appointments, court dates, ICE appointments, everything else.”

“His character is very cheerful, but I see him in his bedroom, hour after hour after hour, you know, door shut, windows drawn,” she said. “He will be fine when he gets his work permit. He then will be a busy boy and will be happy again.”