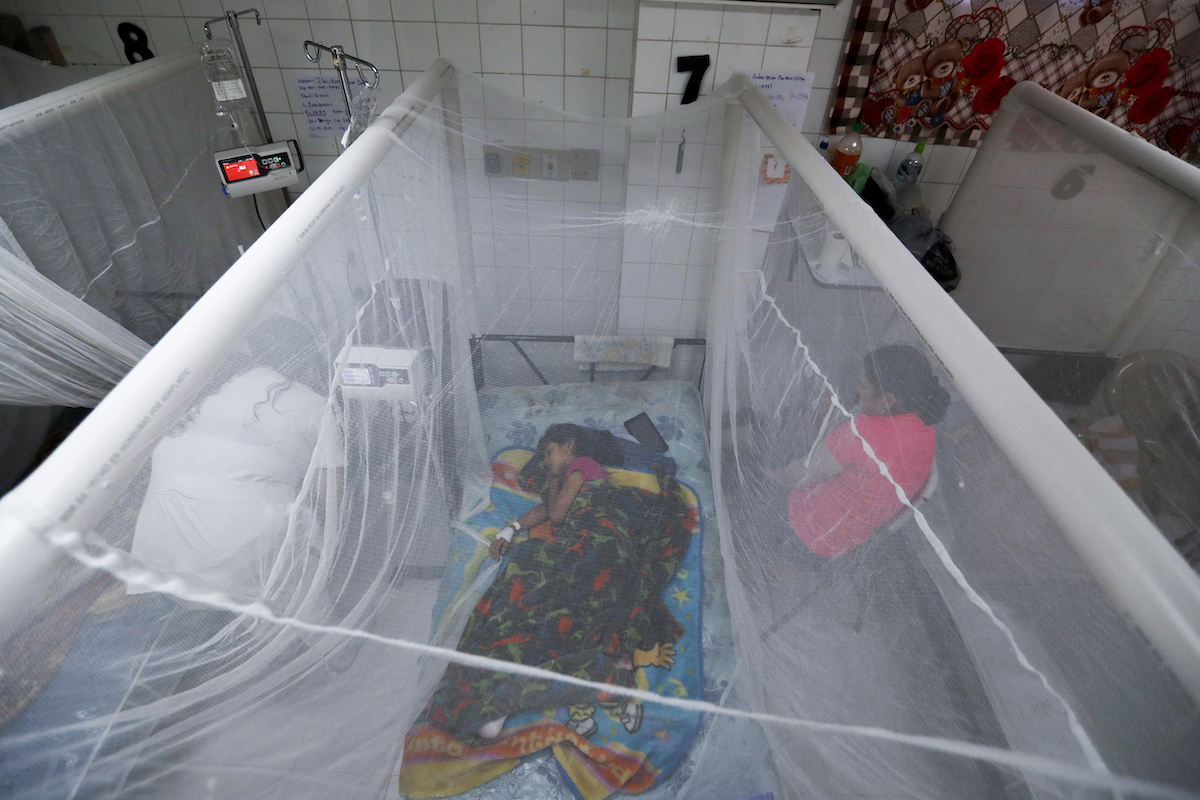 In this photo taken on Aug. 20, 2019, a patients receive treatment for dengue inside a room at the University School Hospital in Tegucigalpa, Honduras. Honduras’ children figure disproportionately among the outbreak’s mortal victims this year, accounting for nearly two-thirds of the 135 confirmed deaths in Central America’s hardest hit country. (AP Photo/Eduardo Verdugo)

TEGUCIGALPA, Honduras (AP) — In a ward usually reserved for juvenile burn victims, children lay listlessly under mosquito nets next to worried parents. On a recent day, 9-year-old Carlos Benítez was headed home after enduring several days of intravenous fluids while doctors waited for his dengue fever to break.

But Dr. Sara Hernández, who supervised the ward at the University School Hospital, knew the bed would immediately be filled, just as all the beds have been since the ward opened in June amid a deadly epidemic of the mosquito-spread virus.

At least 135 people have died from dengue this year in Honduras, nearly two-thirds of them children. Many other suspected deaths await lab confirmation. Honduras already has by far the highest death rate from dengue in Latin America this year, and the country’s most prevalent strain also happens to be the most aggressive and the deadliest.

In this photo taken on Aug. 29, 2019, a worker fumigates inside a home in an attempt to control the spread of mosquito-borne diseases in Los Sitios, El Salvador. As a region, Central America and Mexico have already recorded nearly double the number of dengue cases as in all the previous year. (AP Photo/Salvador Meléndez)

The epidemic hit a country roiled by social unrest and led by a president who has lacked credibility since he won another term in spite of a constitutional ban on his re-election in 2017. Juan Orlando Hernández has also been named a co-conspirator in his brother’s U.S. drug trafficking case. Doctors and nurses spent weeks marching against his proposed reforms, which they feared were a step toward privatizing the country’s health care system.

A level of complacency also existed among the population after five years in which there were only 16 dengue deaths. But that’s often the way the virus acts — a few years of calm followed by a big outbreak.

As a region, Central America and Mexico have already recorded nearly double the number of dengue cases as the entire previous year. Guatemala, Mexico and Nicaragua have seen double-digit death tolls.

The last time this many people in Central America and Mexico died from dengue was 2013, according to data compiled by the Pan American Health Organization. That year, Mexico accounted for the majority of the dead with 192. 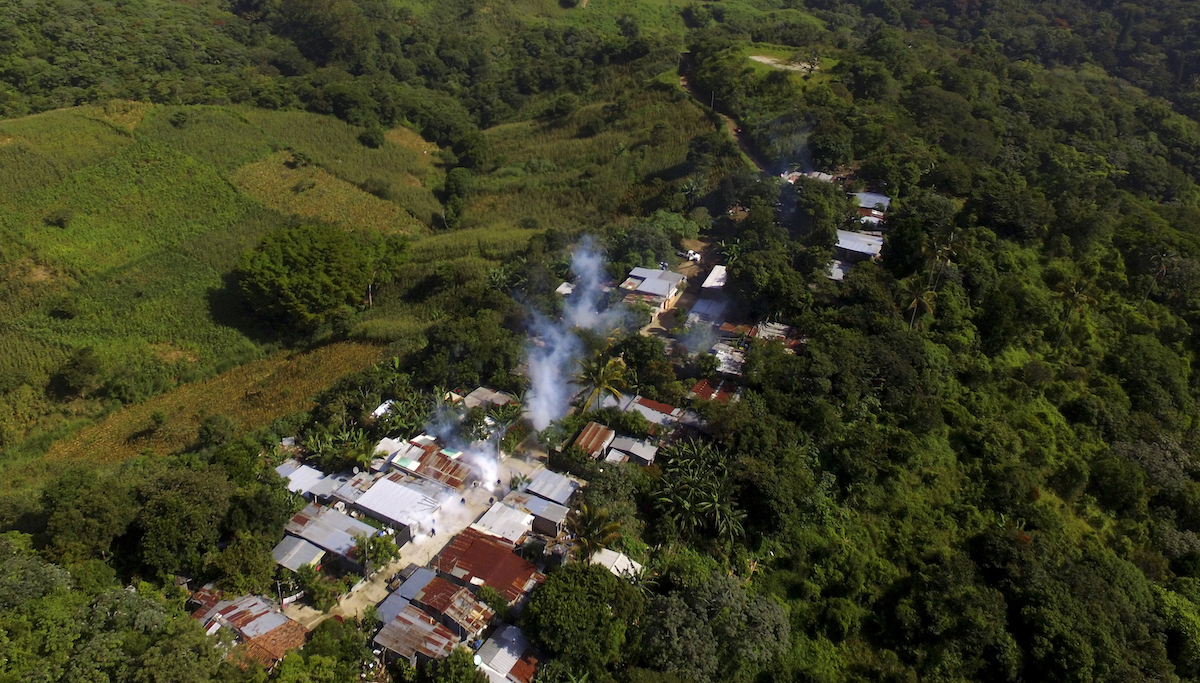 In this photo taken on Aug. 29, 2019, plumes of smoke caused by the pesticide that annihilates dengue-transmitting mosquitoes, in Los Sitios, El Salvador. (AP Photo/Salvador Meléndez)

“When we review the history of the virus, we always find there is a group of external factors that could have been manageable,” San Martin said.

Honduran children figure disproportionately among the outbreak’s fatalities this year because children have fewer defenses and greater exposure due to them attending schools and playing outside, said Hernández, the dengue ward doctor.

When an outbreak happens under normal circumstances and is well managed from the outset, dengue should not cause many deaths, San Martín said.

Most people who are infected never get sick, but people who have been infected previously by another dengue strain are more likely to get severe dengue, which is sometimes called hemorrhagic dengue. It can cause abdominal pain, vomiting and bleeding and can damage internal organs.

On a recent afternoon, dozens of emergency workers cranked up howling fumigation machines that looked like leaf blowers and fanned out into a hillside Tegucigalpa neighborhood. As pesticide smoke engulfed her home and street, Ingrid Hartón said she hoped the fumigation would prevent more deaths.

“We always have dengue and every once in a while dengue causes deaths,” she said.

Roberto Herrera Cáceres, director of Honduras’ National Human Rights Commission, said the government needs to be better prepared for epidemics, as well as forest fires, floods and other events in the age of climate change.

“We shouldn’t be suffering the loss of compatriots or the loss of Honduras residents as a consequence of this sort of lack of foresight,” Herrera said.

The government is addressing the problem now through fumigation and education, as well as improving its detection and treatment of dengue cases, San Martín said.

Twelve of the country’s 18 provinces, known as departments, have been under an emergency since June 14. The Honduran government declared a national health emergency July 2. Two weeks later, President Hernández called on Hondurans to treat dengue “with the seriousness it requires.”

New reports of cases have been declining for the past few weeks, but experts said it was too early to think the worst had passed, because the region remains in the heart of the rainy season. 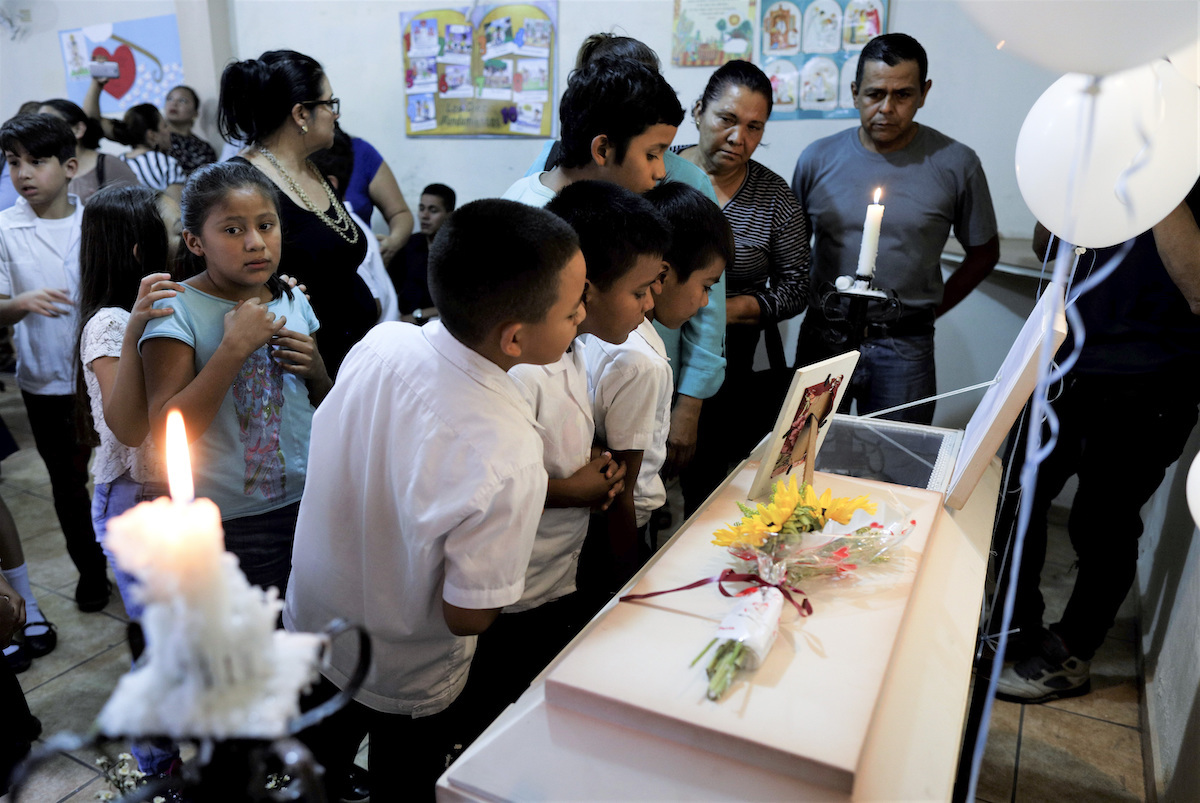 Historically, dengue has been seasonal. Normally, cases would begin to fall off in November with the conclusion of the rainy season and pick up again in June. However, last year an outbreak began in November. Experts will be watching closely to see if that happens again, which could suggest a possible shift in the seasonality of the virus.

Back at the University School Hospital, the capital’s largest, Carlos Benítez’s mother replayed her son’s weeklong ordeal. Dulce María Jiménez said Carlos had gotten sick on a Monday night with a fever and aching body. She recognized the symptoms of dengue and took him to a local health clinic, but watched his condition worsen. He weakened to the point that he couldn’t stand and he stopped speaking to her.

On that Friday, she brought him to the hospital and on the following Tuesday he walked out under his own power.

At home, Jiménez said she would clean her home’s water tanks and make sure Carlos slept under a mosquito net.

“It’s really hard, sometimes you don’t even get it at home, or where you live, but maybe when you go other places and the mosquito bites you,” she said.