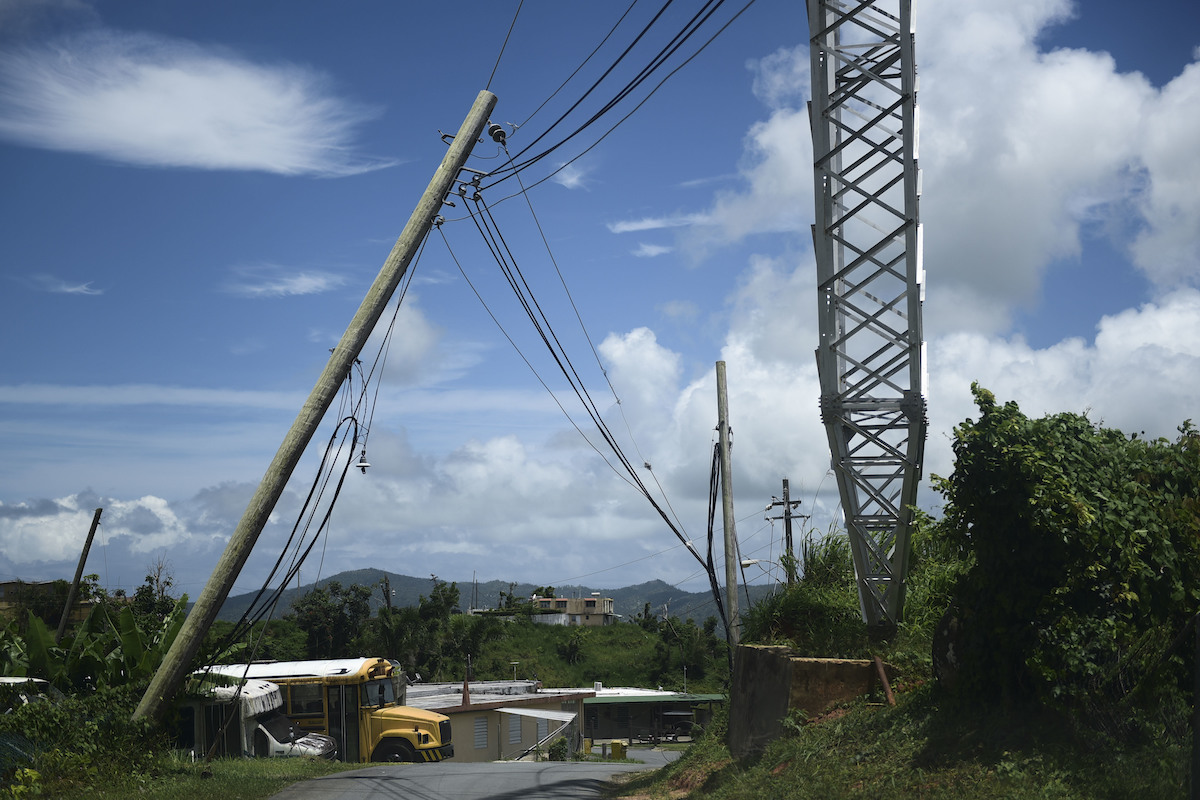 In this May 16, 2018 file photo, an electric power pole leans over the road in the Piedra Blanca area of Yabucoa, Puerto Rico. (AP Photo/Carlos Giusti, File)

By Carmen Scurato and Joseph Torres

“For me, not having any cellphone connection or access to internet in the immediate aftermath of the storm was worse than not having electricity or water service. We had little idea what had happened in the rest of the country.” —Maritza Stanchich in San Juan, Puerto Rico (January 31, 2018)

It’s been two years since Hurricane María struck Puerto Rico and destroyed the island’s critical infrastructure, including its telecommunications networks. But the passage of time hasn’t provided any insight into why this collapse happened or what can be done to ensure something like this never happens again.

It’s time for Congress to use its oversight powers to hold agencies, government officials and private actors accountable for their failures. That’s why more than 30 Puerto Rican advocates, racial-justice groups and media and tech organizations sent a letter to House Speaker Nancy Pelosi urging House Democrats to examine the communication crisis in Puerto Rico following Hurricane María in 2017.

María was one of the deadliest disasters in U.S. history. It knocked 95.6% of cell sites out of service, making communications nearly nonexistent. For some people, the outages lasted for months. Between 3,000–5,000 people died, and the inability of Puerto Ricans to make calls for help or access life-saving information contributed to the death toll.

Many communities throughout Puerto Rico, particularly those in isolated, rural, mountainous and flood-prone seaside towns —as well as the islands of Vieques and Culebra— remained disconnected for many months. Nazario Lugo, president of Puerto Rico’s Association of Emergency Managers, noted that “the biggest crisis after María was communication.”

Unfortunately, the Federal Communications Commission —the federal agency that regulates our nation’s media and telecom systems and investigates disruptions of broadcast media and telecom service following disasters— failed to examine what happened in Puerto Rico.

Under Chairman Ajit Pai’s leadership, the FCC has shown no interest in conducting even the most minimal analysis —let alone the kind of comprehensive investigation that Puerto Ricans deserve— to delve into all of the factors that contributed to one of the worst  communications blackouts in recent history.

The FCC has a history of investigating communication blackouts. Following Hurricane Katrina, the agency created an independent commission to examine what caused the outages in the Gulf states.

More recently, Pai’s FCC investigated how telecom companies responded after Hurricane Michael struck the Florida Panhandle in October 2018. Though the FCC’s Hurricane Michael report was far from comprehensive, it nevertheless found a lack of coordination among wireless- and landline-service providers, power crews and municipalities in restoring communications in the wake of that storm.

But two years after María, we know little about what led to the communications disaster. Instead, the FCC has focused on awarding telecom companies federal funding to restore service. Yet there’s no mechanism ensuring that the companies are in fact using the money to restore and build more resilient networks.

The FCC’s deference to telecom companies should be very concerning—especially since these companies have a history of failing to complete the work they’ve received federal funding to accomplish. As journalist Karl Bode wrote earlier this year: “U.S. carriers have historically received untold billions in tax breaks and subsidies for network upgrades that often fail to materialize. Government oversight ensuring that this money is spent correctly is often lacking.”

Investigating what happened in Puerto Rico is critical to developing policies that could prevent future communications disruptions. Such policies could literally save lives. With the current hurricane season in full force, the Communications Workers of America in Puerto Rico warned that the islands’ 9-1-1 system is “dangerously obsolete” and doesn’t comply with current standards for NextGen 9-1-1.

That’s why we urge House Democrats to use their oversight authority to examine what happened to communications networks in Puerto Rico after María.

Last May, Rep. Frank Pallone (D–New Jersey), the chairman of the House Commerce and Energy Committee, questioned Chairman Pai on whether he asked carriers to waive fees after Maria as he had after Hurricane Michael struck Florida. A flustered Pai refused to answer the question.

That question marked the beginning and end of congressional Democrats’ oversight thus far.

The federal government’s failure to adequately respond to this disaster reflects the history of U.S. colonialism in Puerto Rico—a legacy that’s shaped the responses by both Democratic  and Republican administrations to the islands’ ongoing economic and political crisis.

But the mass protest last July of Puerto Ricans who forced the governor’s historic resignation has inspired people throughout the islands and in the diaspora to fight for our community’s civil and human rights.

It’s inspiring us to continue calling on Congress to investigate the communication crisis and prevent another collapse of the islands’ communications networks. Puerto Ricans need to have a strong voice in this process so they can receive the help they deserve.

The ability to communicate during and after a disaster is a life-and-death issue. We can’t wait for the infrastructure to fail the Puerto Rican people again. We need Congress to act now.

Carmen Scurato is a senior policy counsel at Free Press Action and Joseph Torres is the organization’s senior director of strategy and engagement.