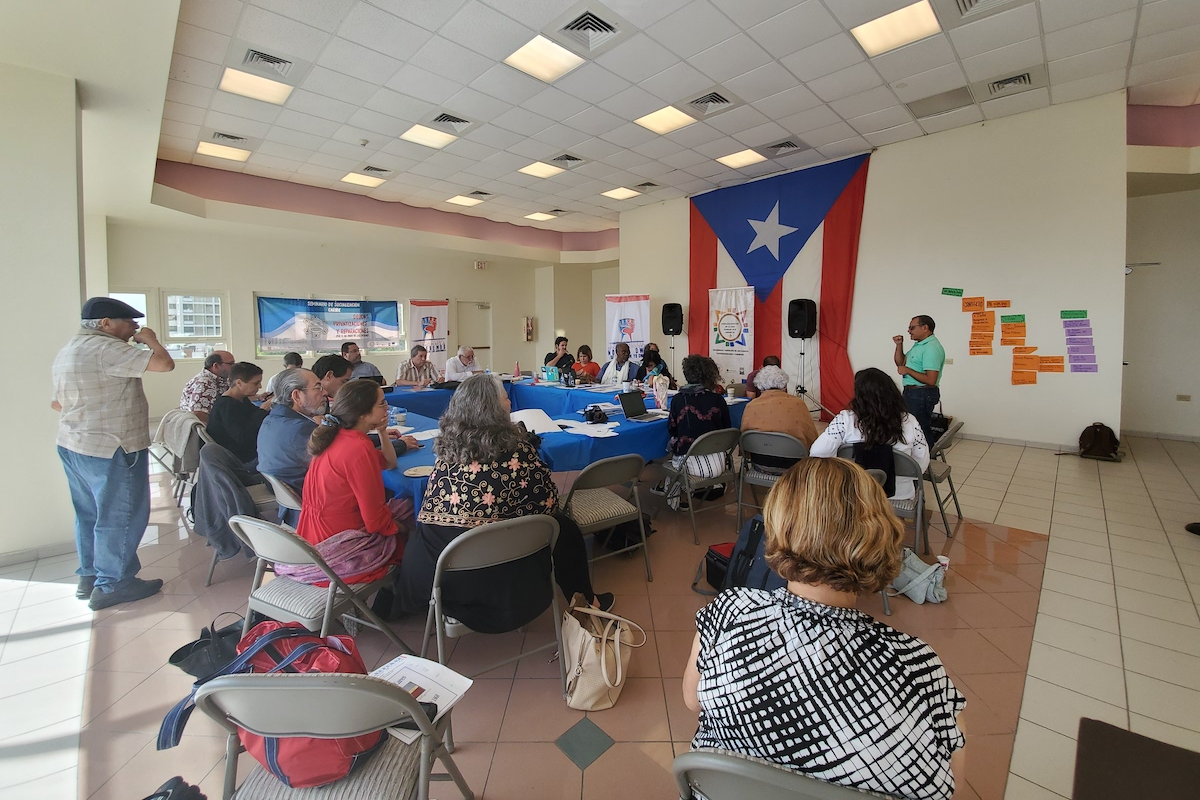 SAN JUAN — It is no coincidence that on the weekend where Puerto Rico commemorated El Grito de Lares, participants from Haiti, Trinidad and Tobago, the Dominican Republic and Nicaragua, along with their Puerto Rican colleagues, gathered in a sunny room of the Electrical Industry and Irrigation Workers Union building to talk about their shared history, culture, and struggles.

“We say that we are the creditors of an immense historic, ecological, climatic, and social debt,” said Camille Chalmers, an economist and political activist from Haiti who is leading the efforts of a campaign that the group la Red Jubileo Sur Américas (JSA) launched during their visit called “Haiti and Puerto Rico: Debt and Reparations.”

“Aside from a movement that raises awareness, we are designing actions to get those reparations,” she added. Chalmers is the spokesperson for the Haitian Platform in Defense of an Alternative Development.

The groups hope to come out of the meetings with action plans that they can implement during the next year.

The event started with a mística—a spiritual circle led by Hilda Guerrero, member of Comuna Caribe. JSA always adds a ceremonial component at the beginning of its gathering. This time the barril (the drum used in bomba) set the rhythm as each person talked about an item they bought for a Caribbean unity altar and invoked an ancestor.

Some of the ancestors summoned during the meeting included Berta Cáceres, Ramón Emeterio Betances, Lolita Lebrón, the women who have died because of gender violence and the people who died in the aftermath of Hurricane María.

“We are completely connected in the suffering, the pain, they even try to take away the right to our lives,” said JSA communications coordinator Ana Sandoval, who was born in Cuba and raised in Nicaragua. “Our spirituality, history and ancestry are things that sustain us.” 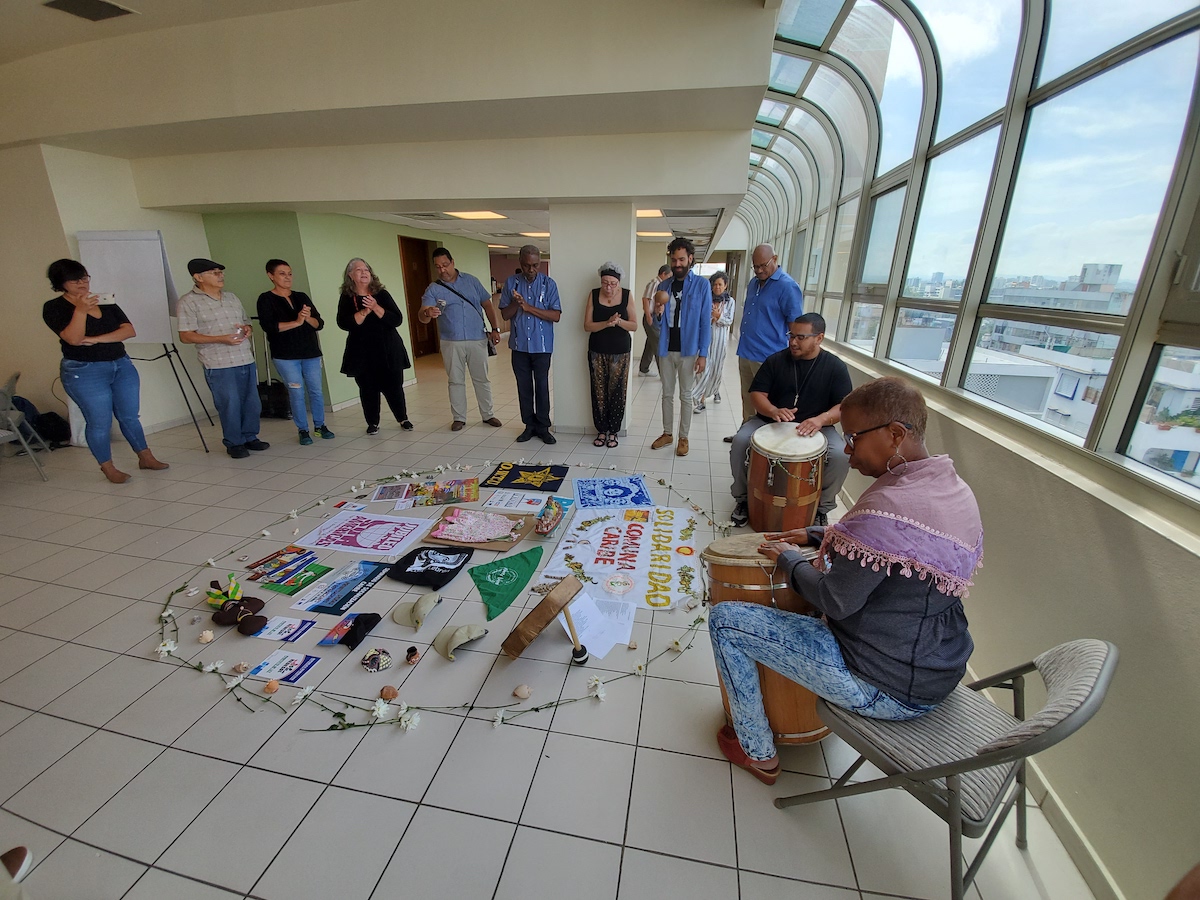 The event started with a mística. (Photo by Camille Alexandra Padilla Dalmau/Latino Rebels)

Every Caribbean island was once a colony of a European power so for centuries their resources have been exploited for the benefit of those outside their land.

“We recognize colonialism as the beginning of the debt,” said Guerrero, while demanding reparations for Puerto Rico. She highlighted 500 years of colonialism, the experiments on women and the exploitation of farms and places like Vieques.

Although it became the first Caribbean nation to be independent, Haiti was forced to pay France what was essentially slave-owner reparations 21 years after their successful anti-slavery and anti-racist revolution. The process of repaying France took over a century and affected the development of Haiti’s economy.

The former French colony also went through two U.S. invasions from 1915-1934 and later in 1994. And most recently, the United Nations’ Stabilization Mission in Haiti, which started after the devastating 2010 earthquake ended in a cholera outbreak that killed thousands. After six years, UN Secretary-General Ban Ki-moon apologized for their role in the outbreak.Yet according to Chalmers, the money promised to repair the damage hasn’t been funneled through.

That is why activists in Haiti are seeking reparations from France, the U.S. and the UN.

Neoliberal policies affect all of the Caribbean and Latin America, according to Kandis Sebro, international affairs representative of the Oilfields Workers’ Trade Union.

“We are ‘independent’ but there’s so much pressure that they’re doing the same things and not taking decisions with our interests in mind,” said Sebro, who is visiting Puerto Rico for the first time from Trinidad and Tobago.

“Debt ‘crisis’ can perhaps better be understood as a permanent condition in the Caribbean rather than a moment when ‘debt’ is understood beyond a monetary relation between debtor and creditor,” according to Sarah Molinari, doctoral candidate in Anthropology at the CUNY Graduate Center.

“There is a pending human rights debt in all of these states,” added Eva Prado, coordinator of the Frente Ciudadano, the organization fighting to have a citizen-led audit of Puerto Rico’s debt.

She refers to the lack of consideration for the humanity and livelihoods for the people on the islands. The existing historic debt in Puerto Rico, for example, has only been exacerbated with the creation of a Fiscal Control Board established by the bipartisan 2016 PROMESA law that approves all of Puerto Rico’s financial decisions. The abysmal response to Hurricane María also didn’t help.

“We don’t see a fruitful country. The youth have no guarantee to the rights of education, health care. Our workers have no assurance, and even with all of that, they want to impose the payment of a debt to take away the little that we had,” Prado said.

Many in the meeting emphasized the importance of looking at the debt as a political mechanism. “We need to create a political stronghold that can break it,” Chalmers noted.

Creating a coalition beyond national borders can help frame this as a regional, political issue.

“International solidarity within the region can help tackle the debt because it broadens the struggle beyond the question of ‘national debt. It’s not just about Haiti and the IMF, or Puerto Rico and its Wall Street vulture-fund creditors,” said Molinari, a co-creator of the Puerto Rico Syllabus.

This responsibility is in the hands of grassroots organizations “because governments have proven untrustworthy and vested in capitalist interests, and reparations and debt cancellation pose a serious challenge to the status quo,” Molinari said.

The coalition will hold a town hall on Monday September 24 at 6:30 p.m. at Puerto Rico’s Colegio de Abogados.

***
Camille Alexandra Padilla Dalmau is a journalist and activist based in San Juan. She also teaches Communications and Journalism at la Universidad de Sagrado Corazón. She tweets from @CamiHabla.