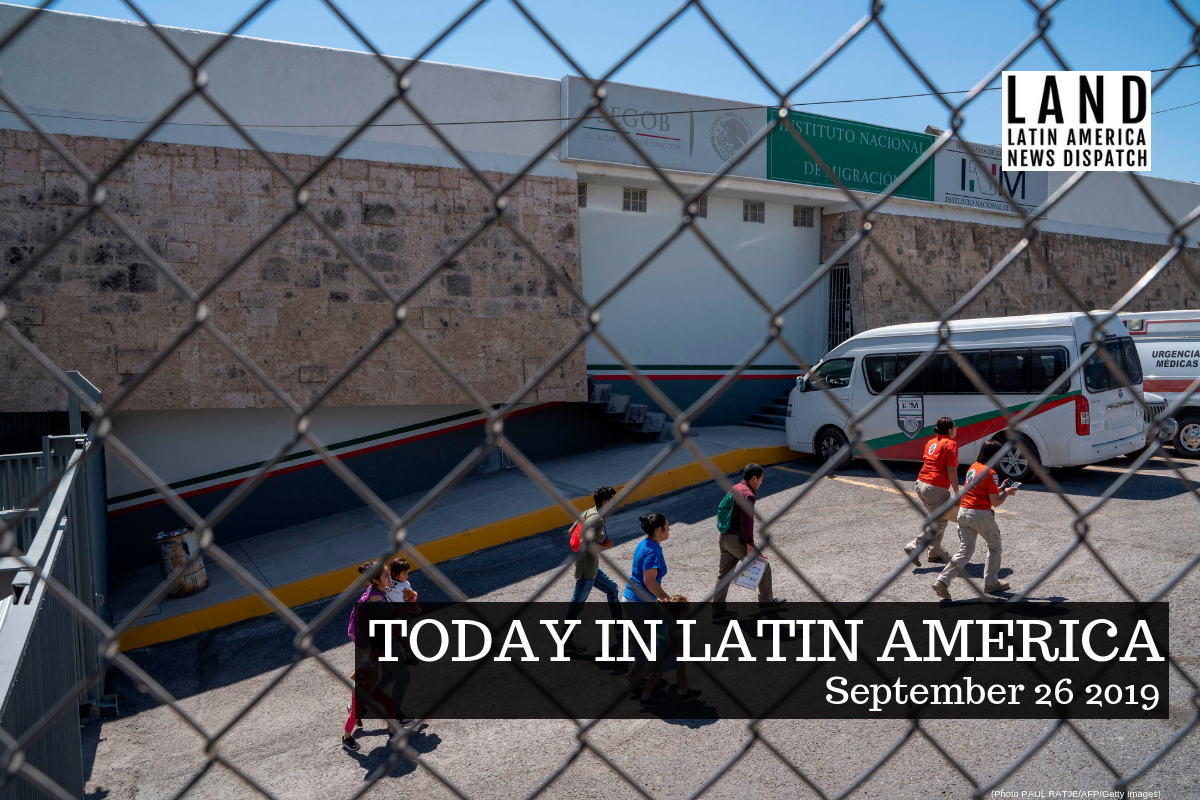 Migrants are led out of the National Institue of Migration in downtown Ciudad Juarez, Mexico, near the Mexico-US border, on September 12, 2019. (Photo by Paul Ratje/AFP/Getty Images)

U.S.-MEXICO BORDER: The Trump administration announced yesterday that it finalized a new asylum deal with the Honduran government. The deal would prevent asylum seekers traveling through Central America from entering the United States. It is expected to be signed later this week. Although many details of the treaty remain unclear, the bilateral agreement would send asylum seekers to await their adjudication date in one of the countries with the highest murder rate in the world. The decision would complete a central element of the administration’s strategy to deter asylum seekers traveling from the Northern Triangle —El Salvador, Guatemala and Honduras— from entering the United States through Mexico. According to Customs and Border Patrol (CBP), over 250,000 Hondurans have crossed the U.S. border over the last 11 months.

ARGENTINA: President Mauricio Macri met with backers of the International Monetary Fund in New York on Tuesday in a meeting he described as “constructive.” There has yet to be a decision on whether or not the anticipated $5 billion funds will be approved. The transfer of funds to Argentina was expected this month, but it appears to have stalled as the political future of the country is unclear, with Macri expected to lose his presidential seat after suffering a substantial defeat in Argentina’s primary in August.

VENEZUELA: President Nicolás Maduro skipped the 74th United Nations General Assembly in favor of a visit to Moscow to speak with Russian President Vladimir Putin yesterday. Putin emphasized his support for Maduro’s government in Venezuela. While the Russian leader reiterated his desire to continue to support Maduro’s administration through the energy sector, as well as via food and health assistance, there was no discussion of further financial aid to the country.

PERU: Peru continues to combat illegal gold mining practices with the creation Tuesday of an advisory committee for sustainable mining development. In February, the government declared a state of emergency regarding deforestation in the Madre de Dios region of the Peruvian Amazon forest, sending in the police and military to end illegal mining. Satellite images show that these efforts have been somewhat successful, with new deforestation declining by 90%.

GUATEMALA: The Guatemalan Congress created a committee to review the work done by the International Commission Against Impunity in Guatemala (CICIG), the UN-backed anti-corruption commission that ended its operations in the country in September after President Jimmy Morales did not renew its mandate. The committee, which will serve until Jan. 10, could potentially reverse CICIG’s work. It can investigate, and even extradite, CICIG officials and Guatemalan government officials who cooperated with the commission, review CICIG’s financing and evaluate the legality of the commission’s actions during their investigations.

In his address at the United States General Assembly yesterday, Morales called for an extensive investigation into CICIG’s work in Guatemala and described the commission as a “criminal structure that co-opted the Guatemalan justice system.” He also accused Iván Velásquez, the former head of CICIG, of violating national and international laws.

EL SALVADOR: An investigation by Revista Factum found that President Nayib Bukele received over $1.9 million from Inversiones Valiosas S.A. (Inverval) in 2013 when he was mayor of Nuevo Cuscatlán. Inverval is owned by Alba Petróleos, a subsidiary of Petróleos de Venezuela S.A. (PDVSA) in El Salvador that is currently under investigation for money laundering by the country’s attorney general. Not only did the firm give Bukele the funds as campaign donations, but Inverval also donated a total of $3 million to Bukele, his family friends and his associates, some of whom now serve in his cabinet. Bukele admitted to having received the $1.9 million from Inverval but claimed it was for the sale of TVX, a television station he got off the ground in 2012.

HAITI: In a televised address to the nation yesterday, President Jovenel Moïse called for a government of unity as he urged protesters to pause the unrest in the country. Moïse also called on the opposition to help his administration come up with solutions to the various problems facing the nation, which they rejected. Protesters continue to condemn widespread corruption and an economic crisis caused by skyrocketing inflation that has left the country with a three-week nationwide gasoline shortage. Many schools and businesses across the country remained shuttered yesterday as protesters set fires, put up barricades and clashed with police. The speech comes after Senator Jean Marie Ralph Fethiere opened fire, injuring two people, at a protest outside Haiti’s parliament on Monday.

PUERTO RICO/U.S. VIRGIN ISLANDS: Tropical Storm Karen battered Puerto Rico and the U.S. Virgin Islands the last two days. Landslides, floods and power outages were reported across both U.S. territories. Puerto Rico Gov. Wanda Vázquez activated the island’s National Guard ahead of the storm, and public schools remained closed until today. A bridge previously damaged by Hurricane Maria collapsed in Utuado, a town in the center of Puerto Rico. Meteorologists said yesterday that the tropical storm may turn around in its own track and head west toward the Bahamas, which was devastated by Hurricane Dorian.

MEXICO: An impeachment inquiry against Donald Trump could potentially delay congressional approval of the new North American trade pact known as USMCA. The delay may result in the devaluation of the Mexican peso and affect Mexico’s stock markets. Trump said he is not sure if the House will “have time to do any deals” and that Speaker Nancy Pelosi is wasting time on a “manufactured crisis.” Mexican President Andrés Manuel López Obrador said the deal should be passed quickly for the sake of all three nations involved in the trade agreement.

REGION: A new report on climate change from the United Nations concluded that all of the world’s oceans are in severe danger. According to the report, heating in the oceans has become so severe that it is threatening global seafood supplies and causing more natural disasters, posing extreme risks to the hundreds of millions of people who live in coastal areas. Although the report recommends the reduction of greenhouse gas emissions worldwide to help reduce the ocean’s warming, it also states that many countries’ adaptations to the ocean’s changes will now be inevitable. The report is based on 7,000 studies and is the most extensive look to date at the effects of climate change on the oceans.