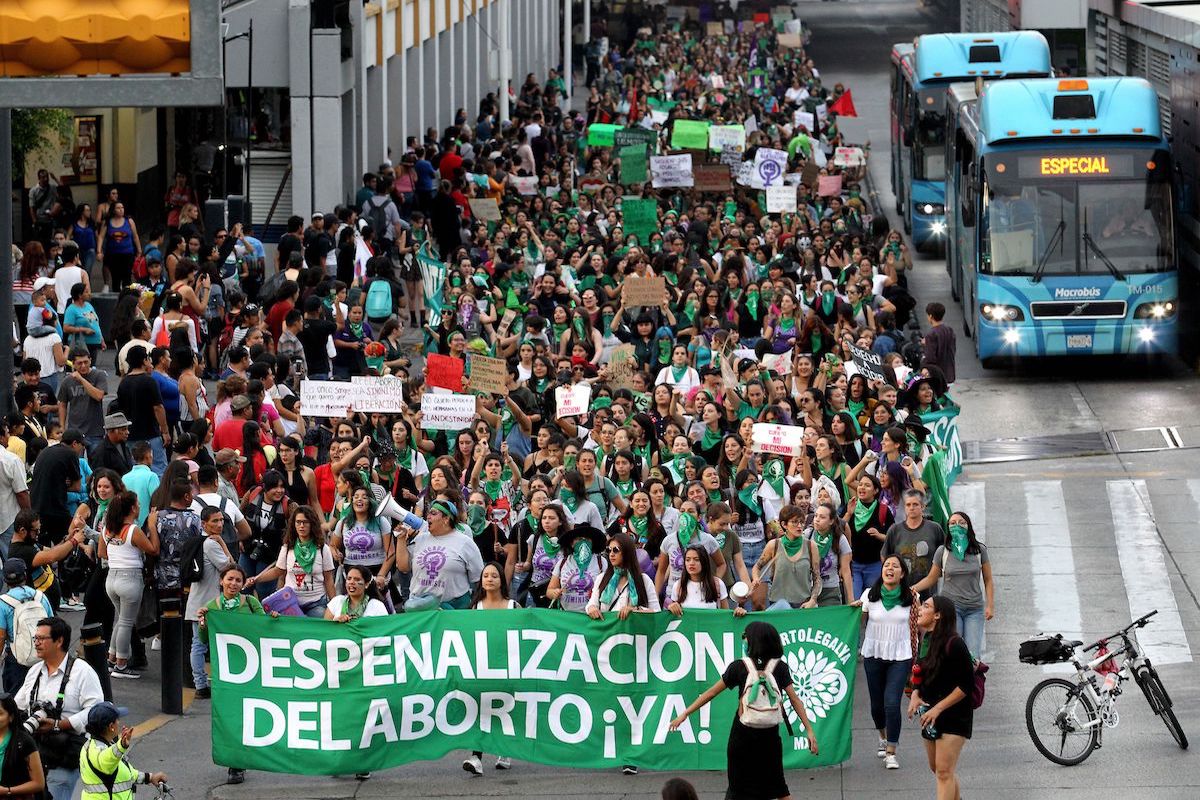 Activists supporting the decriminalization of abortion in Mexico march in Guadalajara, Mexico, on September 28, 2019, during activities in the framework of the International Safe Abortion Day. (Photo by Ulises Ruiz / AFP) (Photo credit should read ULISES RUIZ/AFP/Getty Images)

The chambers of the state legislature in Oaxaca, Mexico, exploded with shouts of joy and rage September 25 as the region voted to decriminalize first-trimester abortions in a 24-10 vote. In the gallery, Catholic protesters chanted, “Assassins! Assassins!” while awaiting the vote. But when the decision was announced, feminist activists, clad in the green bandanas that have become the symbol of the Latin American pro-abortion movement, broke out in shouts of “Latin America will be entirely feminist.”

The vote exemplified the division between Mexico’s deep Catholic, traditionally anti-abortion roots and its growing feminist movements. This tension was on full display in the chambers. Feminist activist Patricia Matus was one of the women celebrating in the legislature when the vote was announced.

“The environment was horrible,” she said, describing pro-life demonstrators holding mass outside the state building, a verbal argument between male and female representatives that nearly delayed the vote and shouting in the gallery.

“We, who are not accustomed to silencing ourselves, kept silent,” Matus said. But, “when we counted the votes in favor, our silence burst into shouts of joy.”

Latin America has some of the most restrictive abortion laws in the world, with only Uruguay, Cuba, Mexico City and now Oaxaca guaranteeing the procedure in the first trimester for any reason. Abortion is legal in cases of rape across all of Mexico, but each of the country’s states makes its own laws beyond that. In 2007, Mexico City decriminalized abortion before 12 weeks of pregnancy, regardless of a woman’s reason for requesting the procedure. Elsewhere, such as in Chile, Argentina and Colombia, abortion is available in specific circumstances, including rape, incest, fetal deformity or risk to the mother’s health. In El Salvador, the Dominican Republic and Nicaragua abortion is completely banned.

But a growing pro-abortion movement across Latin America has seen countries revisiting their abortion laws this past year. That feminist activism, combined with the support of Mexico’s MORENA party representatives, may see changes to abortion laws beyond Oaxaca.

A Wave in Oaxaca

Abortion activists across Mexico were as shocked as the women at the state house when the news broke on social media.

“It was only in the last two weeks that we started to see this possibility, but honestly we did not think it was possible,” said Veronica Cruz, a member of Las Libres, a feminist organization working on issues of reproductive rights in the state of Guanajato, Mexico. “We understand that local feminists and representatives strategized to keep a low profile so as not to draw the attention of the anti-rights groups when they saw that they would have the votes to legalize.”

Matus explained that a network of feminists had organized an abortion rights movement in Oaxaca. Some of the activists approached MORENA representatives, members of President Andrés Manuel López Obrador’s social-democratic party, to bring the abortion debate to the state legislature.

Although the president has not explicitly prioritized women’s rights or abortion access, his government did tweet its congratulations to the state of Oaxaca: “Our democracy is strengthened by the extension of rights and the recognition of women’s autonomy to decide about their own bodies.”

To maintain the force of the pro-choice movement in Mexico, activists will have to adapt strategies that worked in Oaxaca to each of Mexico’s 32 states. Specifically, gaining the support of friendly state representatives, like the members of the MORENA party who supported the bill in Oaxaca.

“The abortion movement in Mexico is very focused on local and regional battles” because abortion laws can be approved by state or federal governments, said Daniela Tejas, co-coordinator of the Mexico City-based abortion fund Fondo MARIA. Now that Oaxaca has decriminalized abortion, “we have to see what the reaction is going to be and encourage other states,” Tejas said. “In addition, and more importantly, we have to be able to replicate the support that was given by the MORENA party in other states.”

The Latin American pro-choice movement, or so-called “green tide,” started in Argentina in the summer of 2018, when feminists took to the streets outside the country’s congress as the nation’s house of representatives and senate debated a bill to legalize abortion. Though the bill narrowly failed in the senate, abortion became less taboo: Women now wear the green bandanas of the pro-abortion movement every day in Buenos Aires. One of the senators who did support the bill in 2018 was former president Cristina Fernández de Kirchner, who is now running for vice president. Although Kirchner did not support abortion during her presidency, she has cautiously supported it as a vice presidential candidate. As presidential elections approach this month, Argentine feminists are likely to favor the Fernández-Fernández ticket over the more conservative incumbent Mauricio Macri.

Mass demonstrations to legalize abortion in Argentina in 2018 became known as “the green wave,” referring to the growing support for the National Campaign. Here, an artist painted a green wave rolling over the Argentine congress. (Photo by Cecilia Nowell)

Argentine feminists continue the fight to legalize all abortion in the first trimester of pregnancy, and the pro-choice movement that they sparked spread across the continent. In mid-September, pro-choice activists protested in Quito when the Ecuadorian national assembly voted against a bill that would have expanded abortion access to all women who have been raped.

But the green tide hasn’t reached all of Latin America. In El Salvador, Evelyn Hernández was a teenager when she was sentenced to 30 years in prison for a miscarriage that prosecutors said she forced. Although she’s been released, the state is still pursuing a case against her. Meanwhile, in the Dominican Republic, the case of 16-year-old Leukemia patient “Esperancita” sparked debate when doctors refused to treat her with chemotherapy at risk of ending her pregnancy. In 2017, Dominican lawmakers considered and then halted a bill which would have allowed women to legally access an abortion in cases of rape, incest, fetal impairment or risk to the mother’s health.

The opposition to abortion remains strong across Latin America, even in places like Oaxaca. Pro-life organizations have publicized the names of MORENA representatives who voted to legalize abortion in Oaxaca and are compiling the names of senators and representatives in other states who may support abortion. Thousands of pro-life, Catholic Mexicans gathered at the Mexico City Metropolitan Cathedral to pray on Sept. 28 while feminists demonstrated for International Safe Abortion Day.

The green bandanas that Mexican feminists wore in Oaxaca’s state congress Sept. 25 reflect the transnational bond of the green tide. In Argentina, the bandana reads “National Campaign for the Right to Legal, Safe, and Free Abortion: Sexual Education to Decide, Contraception to Not Abort, Legal Abortion to Not Die.” Chilean feminists wear green scarves that read “Liberated, Safe, and Free Abortion: The Three Causes Are Not Enough,” referring to the Chilean government’s decision to legalize abortion only under three circumstances—rape, fetal deformity or risk to the mother’s health.  In Ecuador, feminists wear green scarves that say “Liberate Abortion Ecuador.”

Youth activists, from children accompanying their parents to crowds of high school students and recent graduates, turn out in mass to pro-abortion rallies in Latin America. Spray-painting slogans like “motherhood will be desired or it will not be” and chanting “legal abortion in the hospital,” young activists reinvigorated a pro-choice movement that has roots in the United Nations’ World Conferences on Women of the 1970s and 80s.

That fresh air reanimated the feminist movement in Mexico beyond solely pro-choice activism. In March, the #MeToo movement hit Mexico in full force when women began posting their stories of assault and harassment on social media. The movement came in waves, as women from different professions began denouncing men in each industry: first the writers, then professors, doctors, lawyers and more.

The #MeToo movement represented an important shift in Mexican feminism. Mexico has historically seen incredibly high rates of gender violence. In 2018 alone, the United Nations recorded 898 femicides, the second-highest number for a Latin American country. Sexual violence is its own beast: In a 2016 report, Mexico’s National Institute of Statistics, Geography, and Information reported that 4.4 million women were victims of childhood sexual abuse, 32.8 million had experienced mistreatment from obstetricians, and 41.3% of those surveyed were survivors of sexual violence.

Unsafe abortion is also the fourth leading cause of maternal death in the country, according to the Information Group on Reproductive Choice. The top five causes of maternal mortality worldwide are hemorrhage, sepsis, unsafe abortion, eclampsia and obstructed labor.

“There is definitely a positioning of feminist themes on the public agenda,” Tejas said. “However, there is also a rebound from the groups that oppose the feminist struggle and we have to fight with great attention to our security.”

This weekend, just days after Oaxaca decriminalized abortion, thousands of Mexican women took to the streets for demonstrations on International Safe Abortion Day. From Veracruz to Monterrey and Mexico City, women gathered together to hold their green bandanas aloft at symbolic pañuelazos. The hashtag #GritoGlobalPorAbortoLegal (A Global Shout for Legal Abortion) trended on Twitter alongside #AbortoLegalYa (Legal Abortion Now) and #AbortoLegalParaTodoMexico (Legal Abortion for All Mexico).

If this week is any indication, Oaxaca may be just the first ripple of the green tide’s arrival in Mexico. As Cruz said, “I think that on this same wave and the next we will see more states doing the same as Oaxaca.”

This piece was co-published with NACLA.

Cecilia Nowell is a New York-based journalist whose writing focuses on feminism, migration, political art and Latin America. She has bylines in Ms. Magazine, Bitch Magazine, Bust Magazine, The Establishment and Bedford + Bowery. In a former life, she worked as a paralegal at an immigration law firm in Boston. She is currently pursuing a master’s degree in journalism and international relations at NYU.