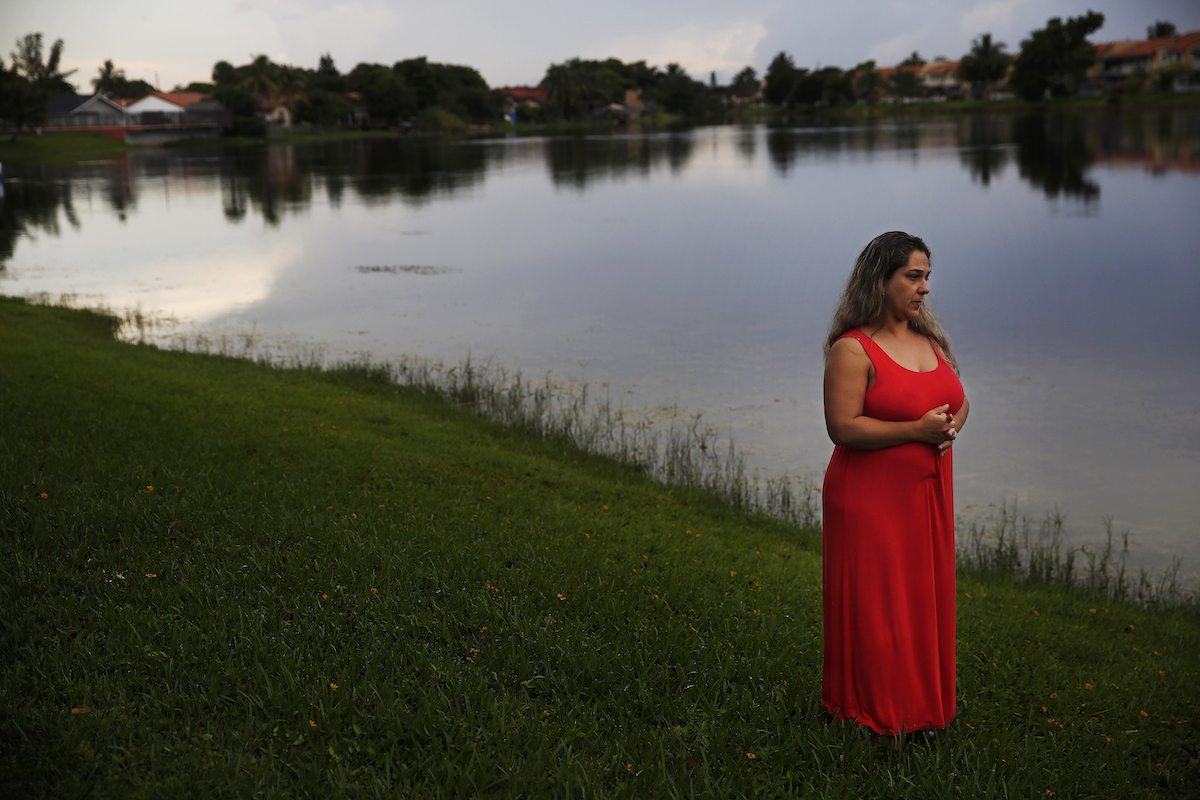 Hold for Cubans Asylum Woes’s story – Barbara Rodriguez looks into the distance outside of her home on Tuesday, Aug. 6, 2019 in Hialeah, Fla. Pablo Sanchez, Rodriguez’s husband is seeking asylum in the United States and is being detained in a remote prison in the Deep South, denying them release while their cases make their way through immigration courts. (AP Photo/Brynn Anderson)

MIAMI (AP) — After seeking asylum in the United States at the Mexican border, Pablo Sánchez was placed in a detention center and is now facing what has become an increasingly common scenario under President Donald Trump: deportation to Cuba.

Since the end of the Obama administration, the number of Cubans deported from the U.S. has increased more than tenfold to more than 800 in the past year as the Trump administration enforces a new policy inked just days before it took over. It is also imposing its own sharp limits on who is eligible for asylum. That’s an unwelcome development for growing numbers of asylum-seeking Cubans who had long benefited from a generous U.S. approach and their government’s unwillingness to take its people back.

For decades, Cubans fleeing the communist-governed island had for the most part enjoyed unique privileges. Even after the Cold War ended, they were given a certain path to legal residence once they touched U.S. soil through the policy known as “wet foot, dry foot.”

But an agreement reached during the final days of the Obama administration ended that and required Cuba to take back citizens who receive deportation orders going forward and consider on a case-by-case basis the return of the thousands of other Cubans who had received such orders over the decades but remained in the U.S. because their country wouldn’t take them back.

Since Trump took office, more Cubans arriving at the U.S.-Mexico border have encountered new limits, including a policy introduced last month that denies protection to asylum seekers who have passed through another country before reaching Mexico and have not sought asylum there.

Despite the new agreement, Cuba remains reluctant to take its people back, and is one of 10 countries that the U.S. government labels “recalcitrant.” That makes it difficult for the administration to enforce its aggressive measures against asylum—and leaves many Cubans in limbo. 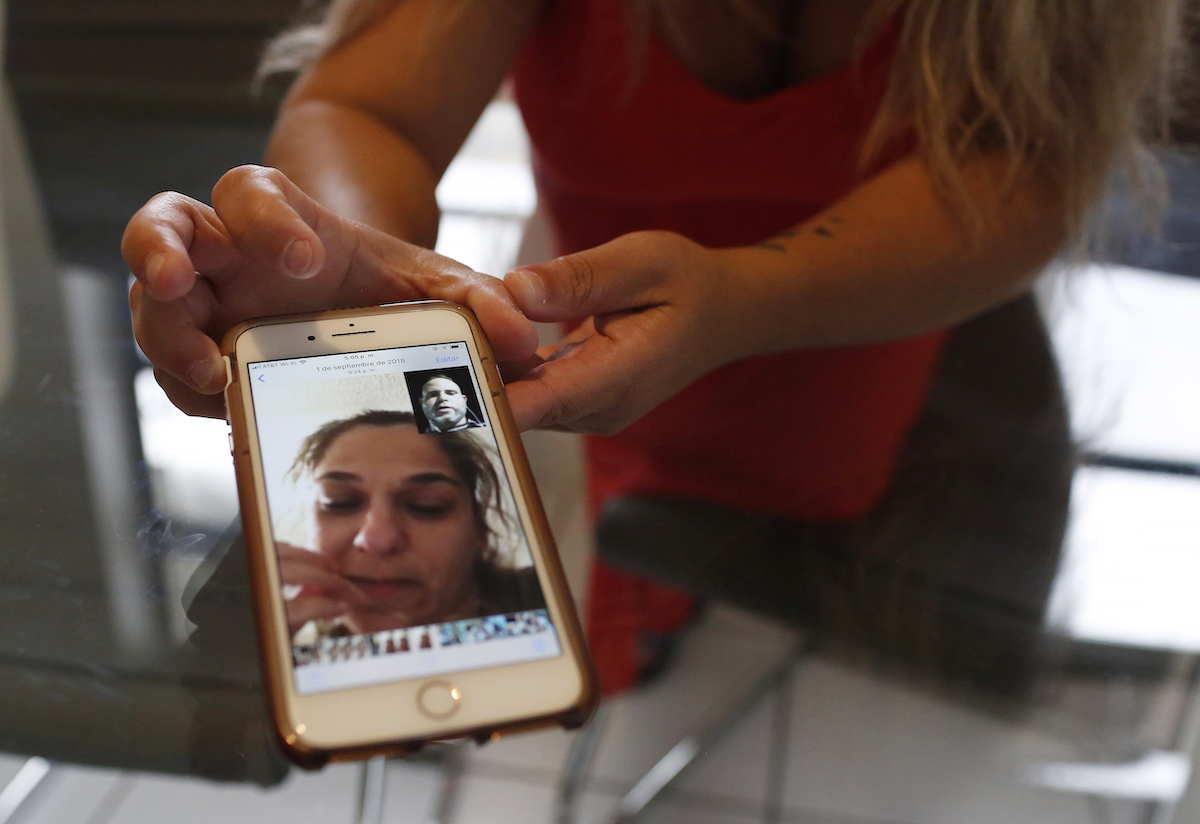 Hold for Cubans Asylum Woes’s story – Barbara Rodriguez shows a photograph on her phone of her talking to her husband, Pablo Sanchez at her home on Tuesday, Aug. 6, 2019 in Hialeah, Fla. Pablo Sanchez, Rodriguez’s husband is seeking asylum in the United States and is being detained in a remote prison in the Deep South, denying them release while their cases make their way through immigration courts. (AP Photo/Brynn Anderson)

Sánchez is married to Barbara Rodríguez, a naturalized U.S. citizen who lives in Miami, but was unable to apply for a visa in Cuba to join his wife in the U.S. because the Trump administration pulled most of its embassy staff out, outsourcing family-related visa petitions to consular services in Colombia or Guyana. Rodríguez claims Sánchez was facing increasing political persecution after having brushes with local authorities over such episodes as damaging a referendum ballot as a sign of protest.

The couple agreed he had to get out of Cuba, saying they had learned he was being investigated and could face jail time. Feeling they had no time to waste —and with no visa services available in Cuba— Sánchez traveled to Nicaragua and through Mexico to seek asylum in the U.S., at a port of entry where authorities detained him and later sent him to Immigration and Customs Enforcement for long-term custody.

“This is plain cruel, despite arriving in this country and demonstrating that you are persecuted and that you have credible fear. After all, this gets thrown away,” said Rodríguez, who talks to Sánchez on the phone daily. “The worse thing is that now I feel all that is left for him is deportation.”

It is unclear how the Cuban government treats people who are deported from the U.S., but rights advocates and lawyers say they could face retaliation for claiming asylum, especially those who claimed they were being persecuted. By contrast, deportees to Mexico and Central American countries typically get a warm welcome home.

Cuban Foreign Minister Bruno Rodríguez Parrilla told The Associated Press the increase in deportations stems from the country “diligently fulfilling its commitments” outlined in the accord with the Obama administration, but at the same time he blasted the U.S. for cutting consular services in Havana.

“It is a shame to politicize the human bond between people and between nations,” he said.

A chartered U.S. government flight landed in Havana on Sept. 27 with 96 Cubans aboard, and another with 120 arrived Aug. 30. U.S. officials say Cuba’s acceptance of this limited number of deportees is a small step, but they believe the nation is still largely unwilling to work with the U.S. on repatriations. They note 39,243 Cubans living in the U.S. with deportation orders.

“Cuba is kind of a thorn in their side in this area,” said Julia Gelatt, senior policy analyst at the nonpartisan Migration Policy Institute.

About 21,000 Cubans have presented themselves to officials at U.S.-Mexico crossings since last October, triple the number seen the previous 12 months, according to the U.S. Customs and Border Protection statistics.

Thousands more Cubans have been stranded in northern Mexico cities on wait lists to request asylum and through a program that forces migrants to wait south of the border for their asylum cases to play out.

Of the Cubans who have been allowed into the U.S., many have been released from custody while they await court dates for their asylum cases, but hundreds have been turned over to ICE custody. 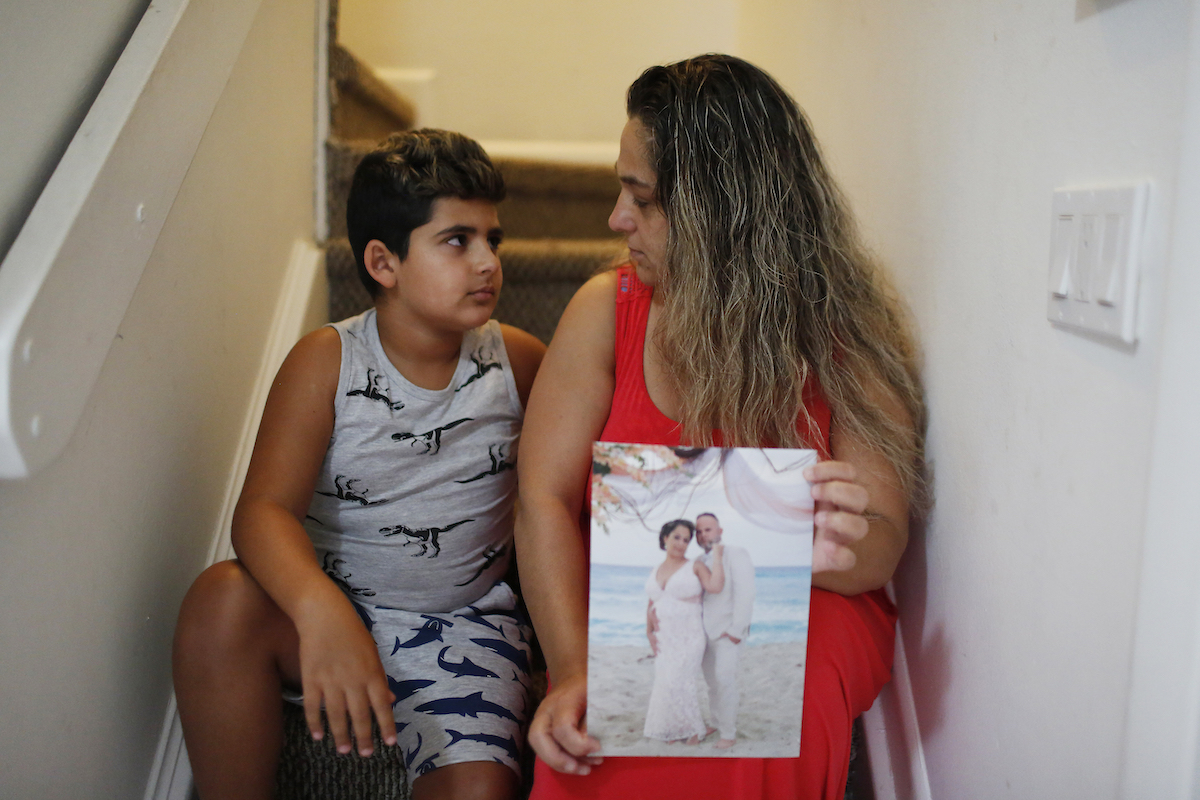 Hold for Cubans Asylum Woes’s story – Barbara Rodriguez and her son, Nolan Aragon, 9, hold a photograph of Rodriguez and her husband, Pablo Sanchez’s wedding on Tuesday, Aug. 6, 2019 in Hialeah, Fla. Sanchez is seeking asylum in the United States and is being detained in a remote prison in the Deep South, denying them release while their cases make their way through immigration courts. (AP Photo/Brynn Anderson)

About 5,000 Cubans have received deportation orders since the new U.S.-Cuba agreement, and 1,300 of them have been deported, according to ICE data.

Luis Dayán Palmero left Cuba in April, traveling from Guyana to Brazil and Colombia, before passing through Central America and arriving in northern Mexico in August.

He crossed the Rio Grande and surrendered to Border Patrol agents, who sent him to Matamoros, Mexico. He now has a U.S. court appearing set this month.

“I plan to ask for asylum, and whatever happens is what God wants,” Dayán Palmero said.