A demonstrator bangs a pot as another holds a sign reading “Chile Woke Up” as they demonstrate on the fourth straight day of protests against a now suspended hike in metro ticket prices, in Santiago, on October 21, 2019. (Photo by Pablo Vera/AFP via Getty Images)

SANTIAGO, Chile — As night fell on Santiago’s fifth day under curfew, the sounds of spoons banging cooking pots spread through street corners and apartment buildings—a song of cacerolazo that’s become a rallying cry for Chileans after decades of inequality.

“This sound is so strong, with the military on the street, it is the only way we can protest peacefully and show discontent with the government,” Tatiana Moyano, a hostel owner, told Latino USA.

“We are really tired of this abusive system. The salaries are low. There is a lot of social discontent. The pensions are miserable,” Moyano added, as banging pans were heard in the distance.

For days, Chile has been torn apart by unrest and violence, sparked last week when students jumped metro turnstiles to protest a 4 percent rise in fares. Demonstrations, both violent and peaceful, have spread throughout the country, often facing heavy repression from the state.

In Santiago, the air remains heavy with tear gas, and the streets wet from the use of water cannons. Curfews and states of emergency have been declared in many regions to curb vandalism, yet so far at least 18 people, including a child, have died in the unrest—five at the hands of armed forces. On top of this at least 260 people have been wounded, with almost 2,000 people detained. 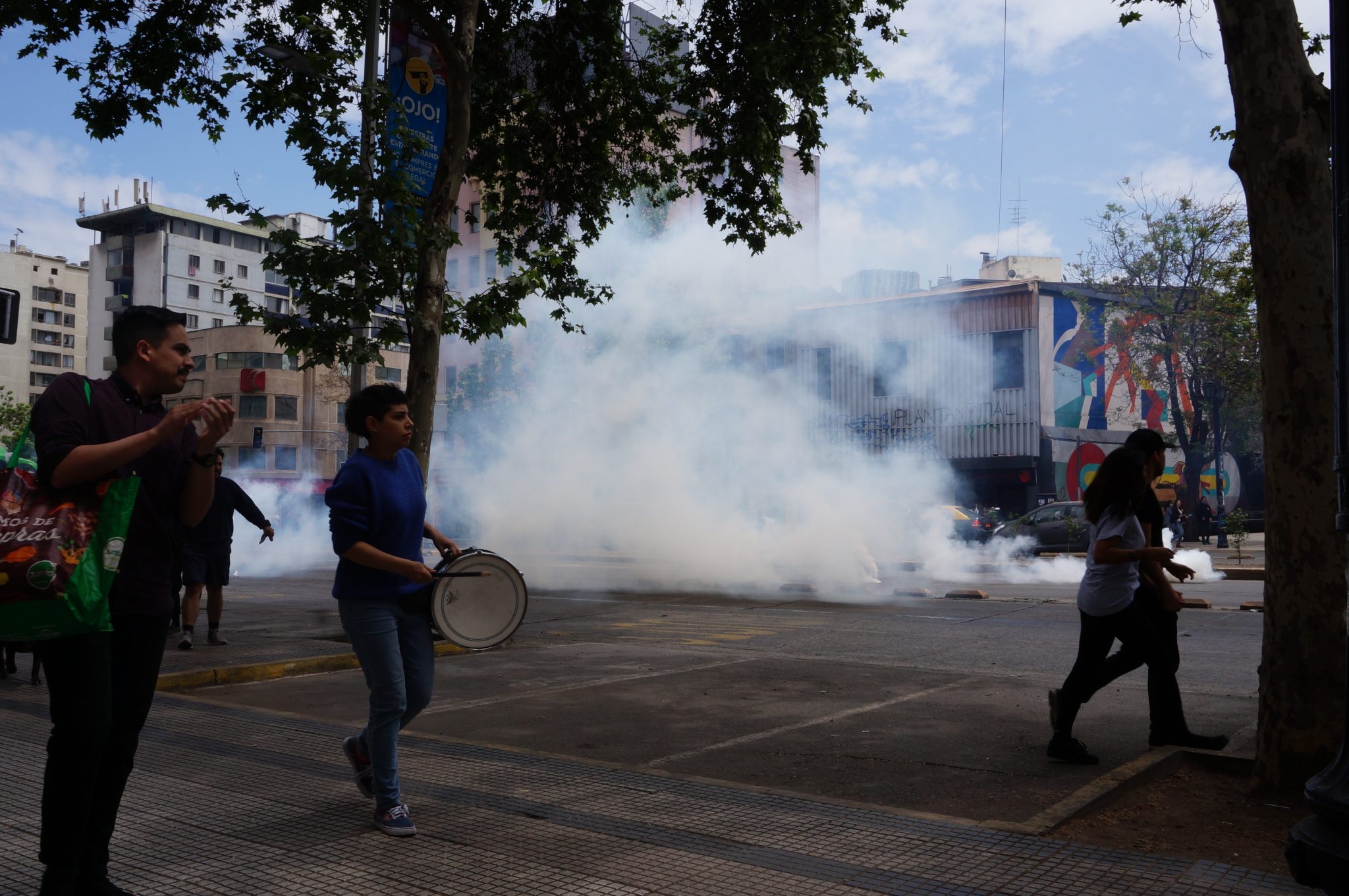 Tear gas is used to disperse protesters this week in Santiago, Chile on October 21, 2019. (Photo by Naomi Larsson/Latino USA)

But through it all, the cacerolazo has been the people’s peaceful response to repressive clashes with the state and the acts of vandals. Protesters and their pots and pans have united against economic policies that have almost completely privatized healthcare and education, alongside poor pensions and rising costs of services. The hike in subway fares was the spark that exposed these deep inequalities.

“There is much inequality. It’s education, taxes. The gap between rich and poor is huge, there are less opportunities for the poorer people to study or work,” 25-year-old Catalina said, as she sat with her friend and held flowers as a form of peace in Plaza Italia. “We hope for change. There’s a lot of things we have to change. It will be hard, it will be long, but it has to happen eventually. People are tired of being abused by the system.”

“We are all angry, but we’re just here with flowers sitting trying to make a statement and the government doesn’t care,” added Catalina, keen to show that the majority of protests have been non-violent.

On Tuesday night the president announced a package of reforms to appease protesters, apologizing for his “lack of vision.” Proposals include a 20 percent rise in basic pension, raising the monthly minimum wage to 350,000 pesos (around $500), and reversing a recent rise in electricity bills.

But for many, the measures are not enough for a crisis this severe. Chileans remain furious at the government’s repression of peaceful protests—an ominous reminder of the country’s 17-year military dictatorship. 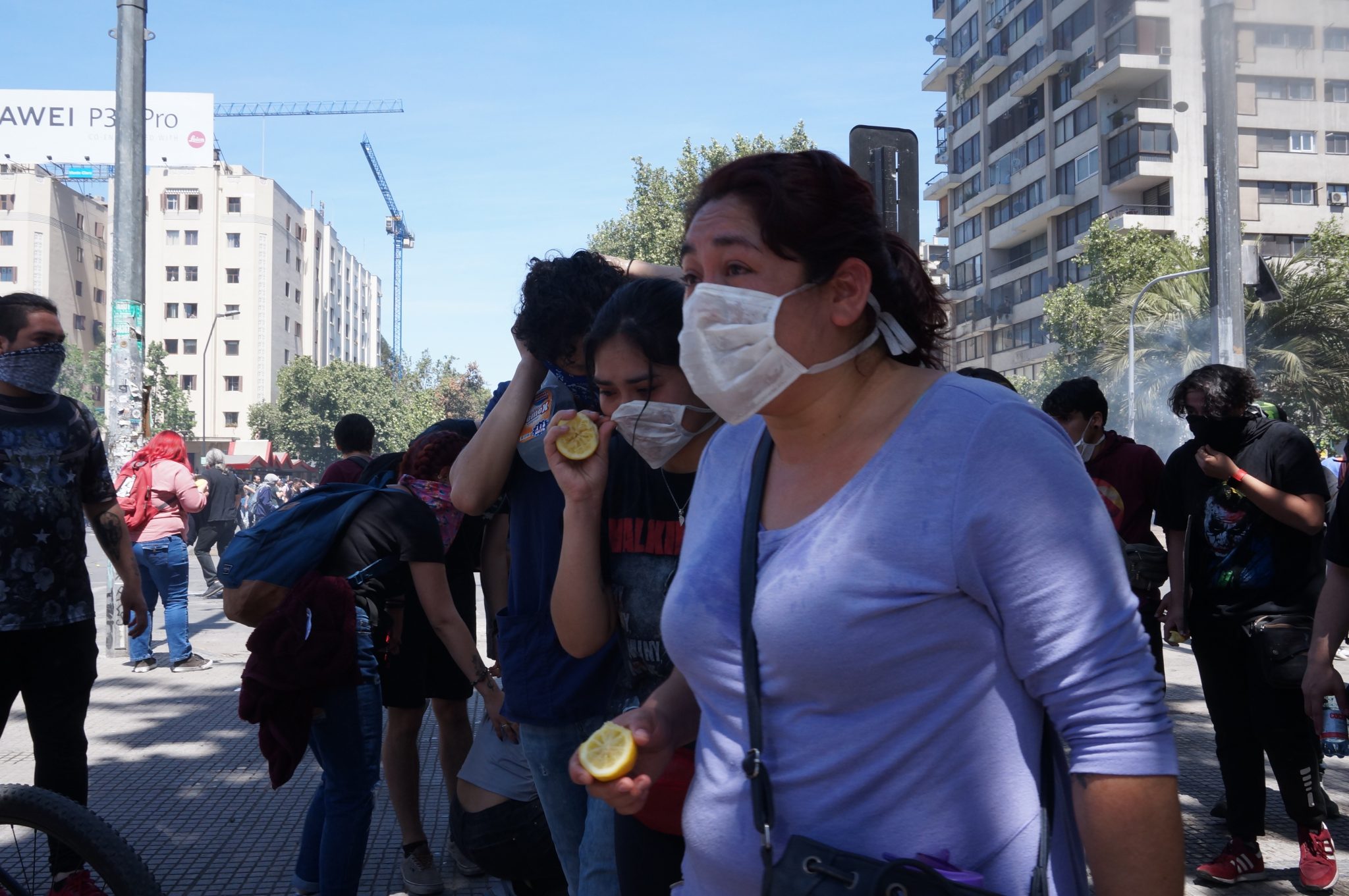 A woman wears a mask in Santiago, Chile on October 21, 2019. (Photo by Naomi Larsson/Latino USA)

The government’s repressive response to the protests has attracted international condemnation from civil rights groups. Amnesty International said in a statement: “Instead of suppressing the protests, President Piñera’s government should focus its efforts on finding effective solutions to the demands that the Chilean people are expressing through their protests.”

#Cacerolazo in front of the military school in Santiago. Peaceful protesting in front of military men. #ChileSeCanso pic.twitter.com/Ze1yNGTJJ2

Joel Hernández, vice president of the Inter-American Commission on Human Rights, told Latino USA the Commission is “very concerned” with the situation in Chile.

“What we are observing is a very critical situation arising from a peaceful demonstration,” he said. “We are aware there could be acts of vandalism, and that there could be some people who are promoting such violence, but we also think that the response by the state should be only under strict international standards: the use of force only when needed, under the principles of proportionality, and restrain.”

Demonstrations are expected to continue throughout the week, with tens of thousands of people descending on Plaza Italia, the epicenter of Santiago’s protests.

“Chile thinks it is a stable country, but it has a lot leftover from the dictatorship, a lot of discontent of the population,” said 73-year-old Gustavo González, clapping his hands along to the chants of “Oh, Chile despertó” (“Oh, Chile woke up”). “The country is unequal, the rich are rich, the poor are poor. The metro was the fire that lit this movement.”

“We are protesting to live a dignified life, and the only way to protest is to shout, to be in the streets, we are not doing vandalism,” 24-year-old student Carlos said. “Chile has woken up. I am here for my grandparents, my parents, my nephews, for our future.”

Naomi Larsson is a British freelance journalist reporting mostly on social and environmental issues. She was a commissioning editor for the Guardian’s global development network.