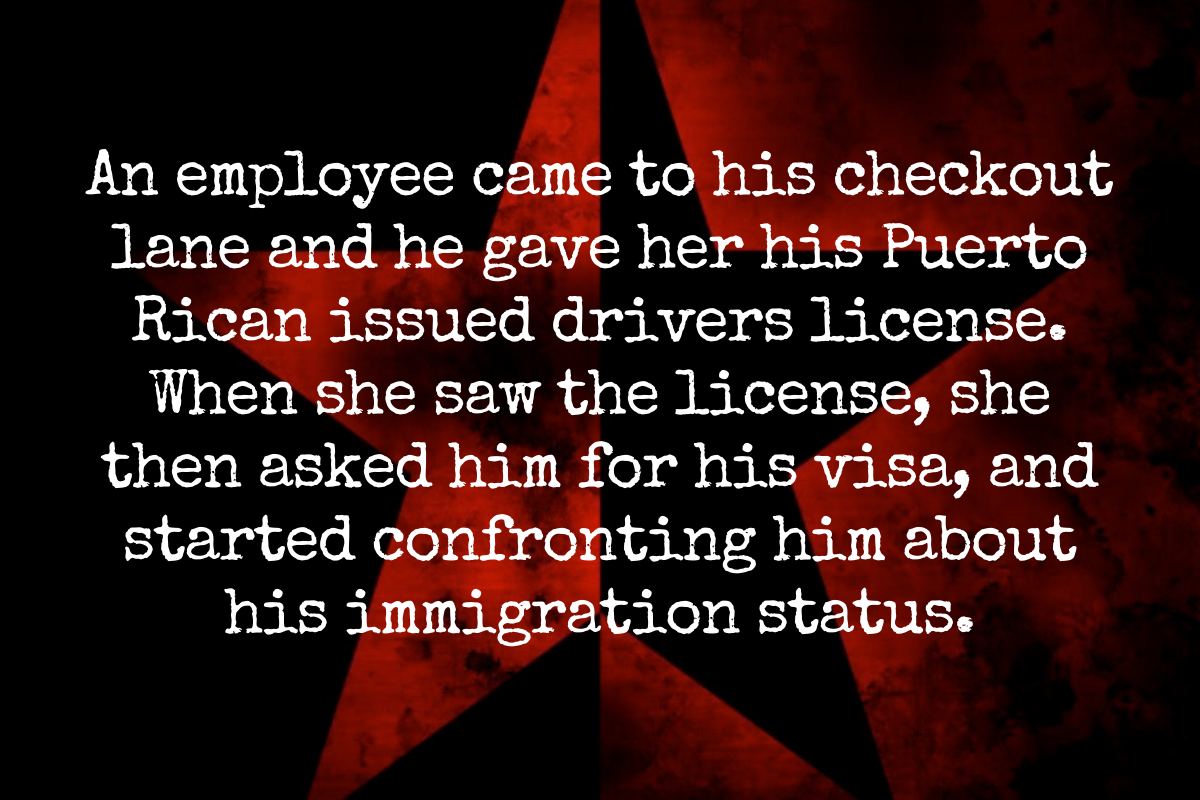 On October 25, the Facebook profile of Arlene Payano Burgos posted the following:

My oldest son José Alejandro left our island to pursue his dream of walking the halls where Neil Armstrong once stood. As a middle class working family we did everything we could to make his dream possible. In 2017 he was accepted to Purdue University in West Lafayette, and is currently in his junior year. Every morning I receive a text or a phone call from him. Today October 25th, 2019, my phone rang and sure as the sun rises it was my son José. As soon as I heard his voice I knew something was wrong. He told me that he has a common cold and that he had just gone to the CVS Pharmacy on Northwestern Ave, which is the closest pharmacy to his dorm, to purchase Mucinex. He went to the self checkout lane and scanned the item where the computer stated to wait for an employee because he needed to provide identification to complete his purchase. An employee came to his checkout lane and he gave her his Puerto Rican issued drivers license. When she saw the license she then asked him for his visa, and started confronting him about his immigration status. It’s important to note that many states now require that consumers show identification for the purchase of certain cold medications. However, that requirement is in place in an attempt to prevent over the counter cough medicine abuse by teenagers, not to inquire about a consumers immigration status.

Because he needed the medicine and needed to get back to his dorm to study, José then explained (unnecessarily) to this employee that he is, in fact, a United States Citizen. The employee then refused to authorize the transaction and told him that his form of ID was not accepted because it was not a valid US identification. However, a Puerto Rican driver’s license is a valid form of US identification, and is even accepted by the Transportation Security Administration for travel within the United States. In an effort to wrap up the transaction and get back to school, he then proceeded to show her his United States Passport which she also refused to accept. She then subsequently refused to sell him the medication. The shift manager then came out and gave him the same explanation. My son then asked them for their names to file a complaint. Both employees refused to give him their information and he was forced to leave the store without the medication.

Needless to say my son, or any other consumer, is not obligated to disclose his immigration status to any CVS employee! What caused this employee to ask him for his visa? Was it his accent? Was it his skin color? Was it the Puerto Rican flag on the license? Whatever triggered her to discriminate against my son embodies exactly what is wrong in the United States of America today.

I called the store and asked to speak with the manager and I was then informed that he was not available because he was out until Monday. I was placed on hold and transferred to speak with the shift manager. The same woman that had told my son she could not sell him the Mucinex. She then proceeded to tell me she could not do anything about the incident and that the Manager was not available until Monday. She proceeded to explain that she was just following CVS policy, and that CVS only accept identification from the United States, Canada or Mexico. I then explained that Puerto Rico is a territory of the United States and she then clarified that the policy specifically requires that employees do not accept driver’s licenses from Puerto Rico! No license issued from Puerto Rico is accepted as a valid form of identification in CVS stores! This is an outrage! The shift manager failed to offer an explanation as to why his US passport was not accepted as a valid form of identification for the purchase of cold medication.

I guess I should be thankful that he wasn’t thrown in the back of an ICE van and interrogated, or worse. I can’t help to be ANGRY, OUTRAGED, and DISGUSTED. The current issues we are experiencing in the United States related to immigration, ICE raids, and rampant racism are directly fueled disgracefully by President Trump. What happened to my son today is not unlike what many other families have had to face since Trump was sworn into office and it’s completely unacceptable. Enough is enough. The men that signed the Declaration of Independence stated that all men are created equal. Our founding fathers must be rolling over in their graves.

As a Puerto Rican, a United States citizen, a mother, a union member, a wife, and a human being, I will not let this stand! I cannot let this stand! And with every fiber in my being I will fight the injustice that was done to my son. I will use every resource I can to get this story out and make this right!

To all my friends, please help me spread this message and maybe, just maybe, someone else’s child won’t have to go through this. I call on all Purdue students to boycott CVS – especially the Puertorriqueños.

Not surprisingly, the post has gone viral on Puerto Rican social media. As of this posting, it has already gotten more than 2,600 shares and it continues to keep getting shared. Calls to contact CVS are also beginning to appear on Twitter:

Hey @cvspharmacy, can you educate your racist employees at your store on Northwestern Ave in West Lafayette, IN that Puerto Ricans are US citizens, your staff has no authority to question a person's citizenship, and that PR ID's are legally valid? Thanks. https://t.co/iTwA11e3At

@cvspharmacy why is it CVS policy to refuse forms of ID from Puerto Rico? or at least, why are @LifeAtPurdue students from Puerto Rico told this before being kicked out of the CVS?

And for those wondering, the Department of Homeland Security says that Puerto Rican driver’s licenses are compliant and legally valid as identification by federal agencies. But as you might know or not know, states (hello, Georgia) tend to still discriminate. And, did you even notice that the local CVS store didn’t even accept a U.S. passport either?

On Saturday morning, Latino Rebels contacted CVS’ corporate media team for comment about the incident. If CVS does respond, LR will share it here as an update. Latino Rebels also reached out to Payano Burgos to see if she can share any additional details about what she posted. She told us that we can use what she wrote. We also confirmed that the incident did occur.

UPDATE, November 2, 1:55 p.m. ET
After acknowledging that they were not aware about the incident, here is what a CVS corporate spokesperson sent LR via email: “We are committed to ensuring that every customer receives courteous, outstanding service in our stores and we apologize to the customer for his recent experience. We are fully investigating this matter to learn more about what occurred. While our employees must adhere to laws and regulation requiring identification for the purchase of over-the-counter medication, our expectation is that all customers be treated in a professional manner.”

As a follow up, the CVS spokesperson said this: “For clarity, a Puerto Rican ID is considered a valid form of identification at CVS Pharmacy.”

She also personally thanked us for sharing her story directly to @cvspharmacy's corporate office. Without it, she noted, she felt that it would have not gotten any attention.

Also on Sunday, Payano Burgos posted this update: “My family and I are so grateful for the outpouring of support and love we have received following my post regarding the incident that happened with my son at CVS. I can’t thank everyone enough for that but we would like to ask that we all remember to treat each other with respect. Furthermore I ask that no one harass or threaten any CVS staff in relation to this incident. Let’s all be the better person in this situation. Thank you all again for the support and love for my family.”