Demonstrators Demand Halt to Killings of Women in Mexico 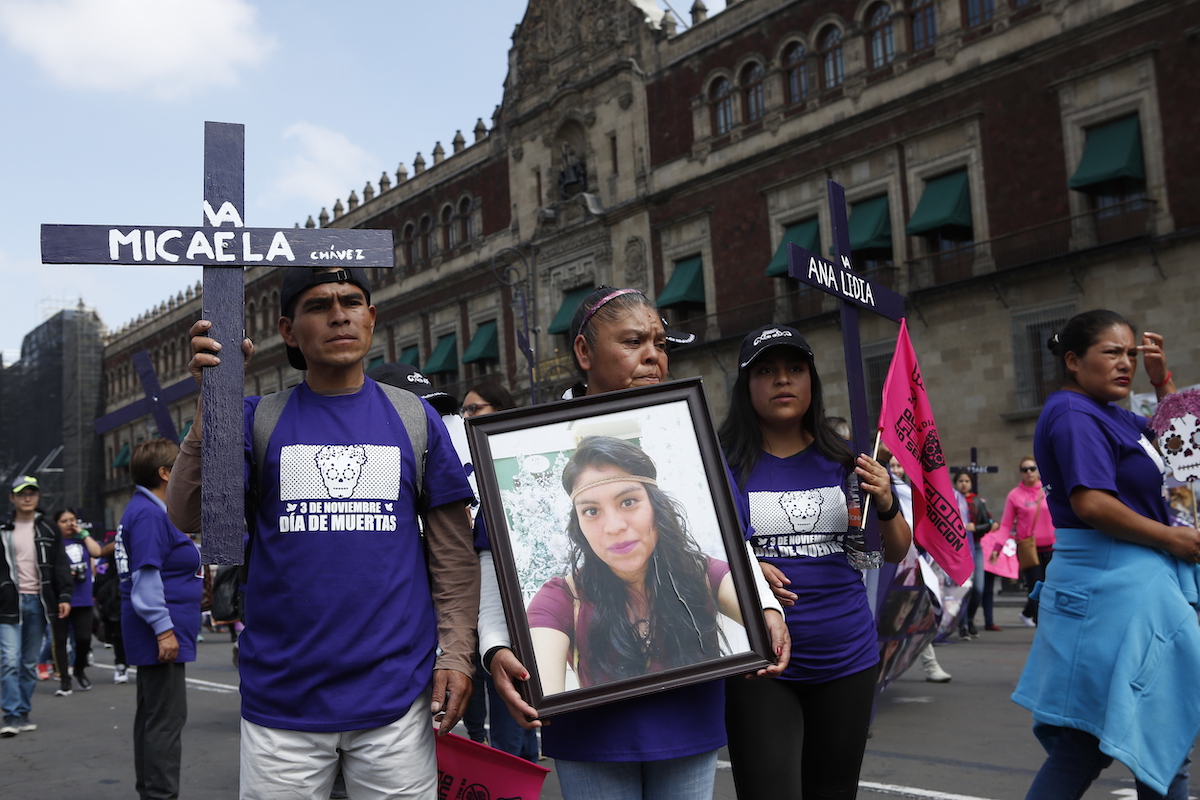 Virginia Elizalde carries a portrait of her daughter Micaela Chávez, who disappeared on Feb. 4, 2017, during a protest demanding justice for women who have been murdered or disappeared, one day after the Day of the Dead holiday in Mexico City, Sunday, Nov. 3, 2019. Nine women are killed per day in Mexico, according to the U.N. (AP Photo/Ginnette Riquelme)

MEXICO CITY (AP) — Relatives of women and girls murdered or missing in Mexico marched through the capital Sunday carrying over 100 purple crosses inscribed with the names of victims, demanding justice for their loved ones and improved efforts to investigate their cases.

Bearing T-shirts and signs with photos of the victims, they walked behind banners and chanted the victims’ names as they headed for the sprawling main square, the Zócalo, to set up an offering near a massive altar erected to mark Día de Muertos, or Day of the Dead.

“Not one more killed!” they cried. “Our daughters, where are they?”

The demonstration set out from the Angel of Independence Monument and headed for Mexico City’s sprawling main square to set up an offering near a massive altar erected to mark Día de Muertos.

Día de Muertos is observed Nov. 1-2, and the demonstration was billed as a “Día de Muertas” march, or “Day of the Dead Women,” to call attention to the killings of women and girls—nine per day in the country on average, according to the United Nations. It was the second Dec. 3 march by the organization, Voices of Absence, which is out to get the date associated with their cause.

“We march on ‘Day of the Dead Women’ to take them beyond just the altars,” journalist and activist Frida Guerrera said. “They did not die of old age or from illness. They were snatched away, they were ripped from their families, and we want them to be seen. May they not remain in the invisibility of Day of the Dead celebrations.” 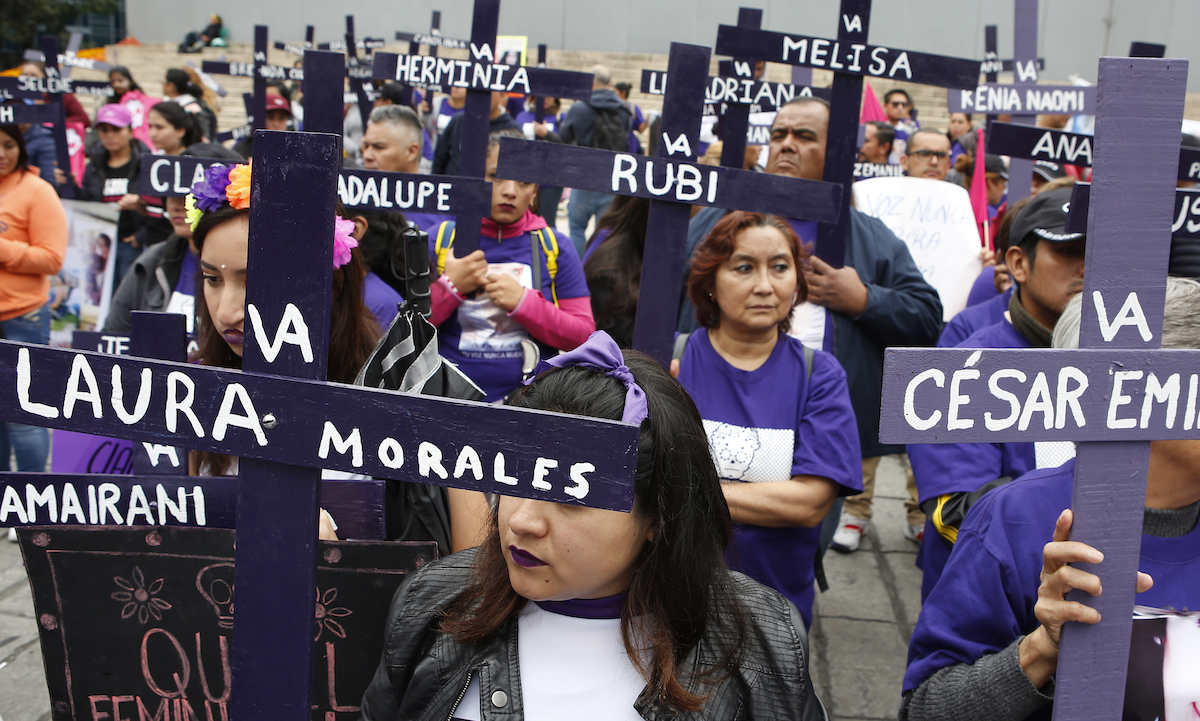 Activists hold crosses on the steps of the Angel of Independence Monument in memory of women who have been murdered or disappeared, to demand justice for their loved ones, one day after the Day of the Dead holiday in Mexico City, Sunday, Nov. 3, 2019. (AP Photo/Ginnette Riquelme)

Norma, a 43-year-old Mexico City resident, came in memory of her daughter Valeria, a 24-year-old engineering student who was murdered in June allegedly by her boyfriend. Norma, who declined to give her full name because the suspect is a fugitive, described Valeria as hard-working, healthy and beloved by family and friends.

“We want justice,” she said. “Justice for her, justice for all of them, so that all women, all our daughters, we ourselves can walk in the street.”

She was accompanied Saturday by about 30 relatives and friends of Valeria, and perhaps 200 other purple-clad demonstrators.

“One feels the solidarity, that sisterhood among us,” Norma said. “We are sisters of the same sorrow.”

Voices of Absence was born out of an online chat and has grown to encompass over 100 families, said Guerrera, whose organization pushes prosecutors to investigate cases and helps relatives navigate the judicial process. 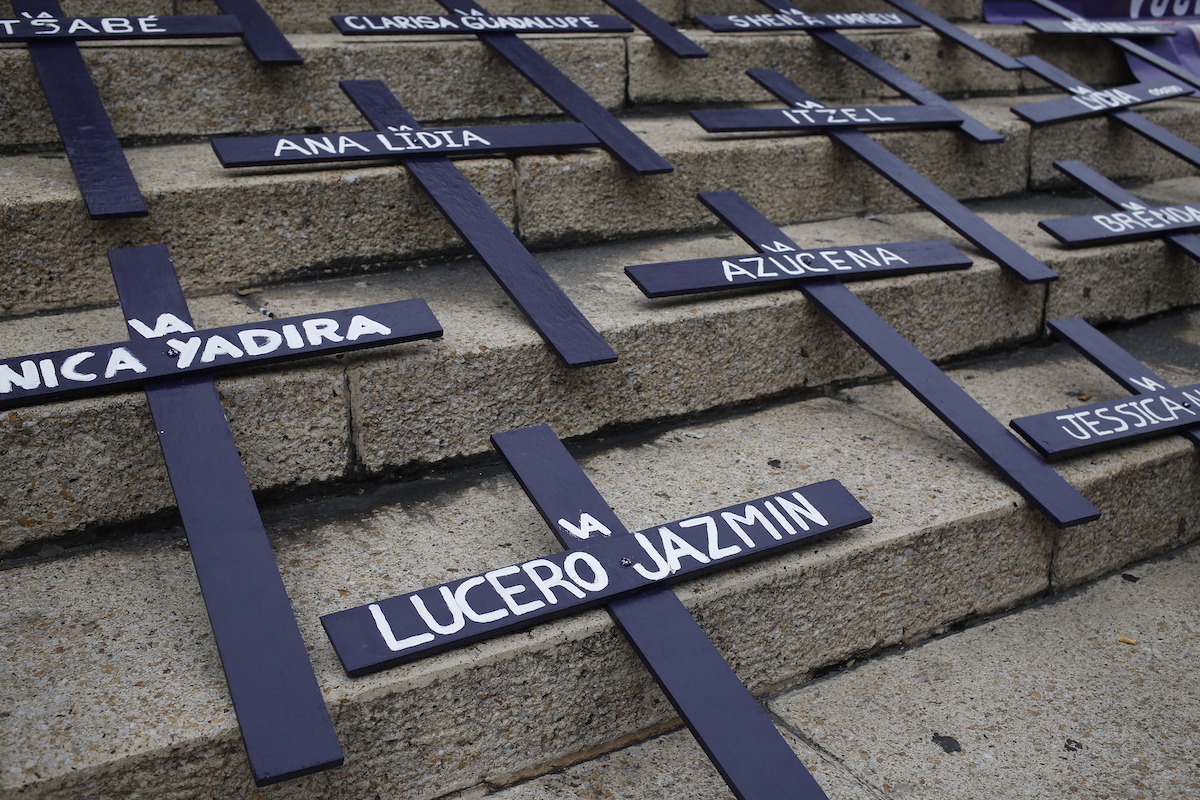 Crosses lie on the steps of the Angel of Independence Monument in memory of women who have been murdered or disappeared, as part of a protest to demand justice one day after the Day of the Dead holiday in Mexico City, Sunday, Nov. 3, 2019. (AP Photo/Ginnette Riquelme)

Guerrera said the demonstrators were demanding a “real interest” on the part of authorities to address gender violence. She credited Mexico with having in May signed onto the EU- and U.N.-sponsored Spotlight Initiative, which aims to eliminate violence against women and girls, though she argued that progress toward meeting its goals has been slow in the country.

At the Zócalo demonstrators wrote victims’ names on two much larger crosses, and the plan was to bolt them to the ground at Monument to Mothers at a nearby intersection, the latest in a series of informal “anti-monuments” that have sprung up to commemorate violence, repression and impunity in Mexico.