SANTIAGO, Chile (AP) — Thousands of Chileans took to the streets again Monday to demand better social services, some clashing with police, as protesters demanded an end to economic inequality even as the government announced that weeks of demonstrations are hurting the country’s economic growth.

The latest protest came after a short break in the weeks-long wave of demonstrations in which 20 people have died in clashes amid looting and arson that forced the cancellation of two upcoming major international summits in what is considered one of Latin America’s wealthiest countries.

Most Chileans starting last week were on a long holiday weekend and Monday’s protest was relatively small compared to earlier demonstrations. But the thousands who turned out showed that protest movement did not appear to be fizzling.

Most demonstrators supporting the leaderless national movement marched peacefully, but some groups threw rocks and firebombs at riot police officers—who responded with volleys of tear gas and water cannon blasts to try to disperse the crowds. The government said that at least six police officers were injured, including two who were attacked and set on fire with Molotov cocktails.

Police officers run to get assistance after being hit with a gasoline bomb thrown by protesters during an anti-government protest in Santiago, Chile, Monday, Nov. 4, 2019. (AP Photo/Esteban Felix)

The demonstrations began last month after the government announced a hike in subway fares and transformed into a leaderless national movement with broader demands over education, health services and economic inequality. Santiago’s subway system has said that it has suffered nearly $400 million in damages, while businesses in Chile are estimated to have lost more than $1.4 billion in damages to arson, looting and lost sales.

Before the marchers gathered, Finance Minister Ignacio Briones warned that negative economic impacts from the protests in the country that is the planet’s leading copper producer forced officials to lower their 2019 economic growth prediction to between 2% and 2.2% from 2.6%.

His announcement was met with disdain by protesters who said they have not shared in Chile’s economic prosperity.

Marcos Díaz, a 51-year-old teacher protesting in the capital of Santiago, said big corporations have been the biggest beneficiaries.

“Through all these years of democracy, we’ve been living with a minimum wage that puts 60 percent of the workers below the poverty line,” he said. “Growth is a fallacy invented by this model to hide the inequality of this country.”

Accountant Veronica González said even though she believes people are losing money from the protests, they’ll get it back later and that “this fight has to go on anyway.”

Protesters have slammed what they label a “neoliberal” economic model that on the surface makes Chile seem like a Latin American economic success story — masking a widely criticized pension system and hybrid public and private health and educations systems that give better benefits to the rich, who can afford to pay more. 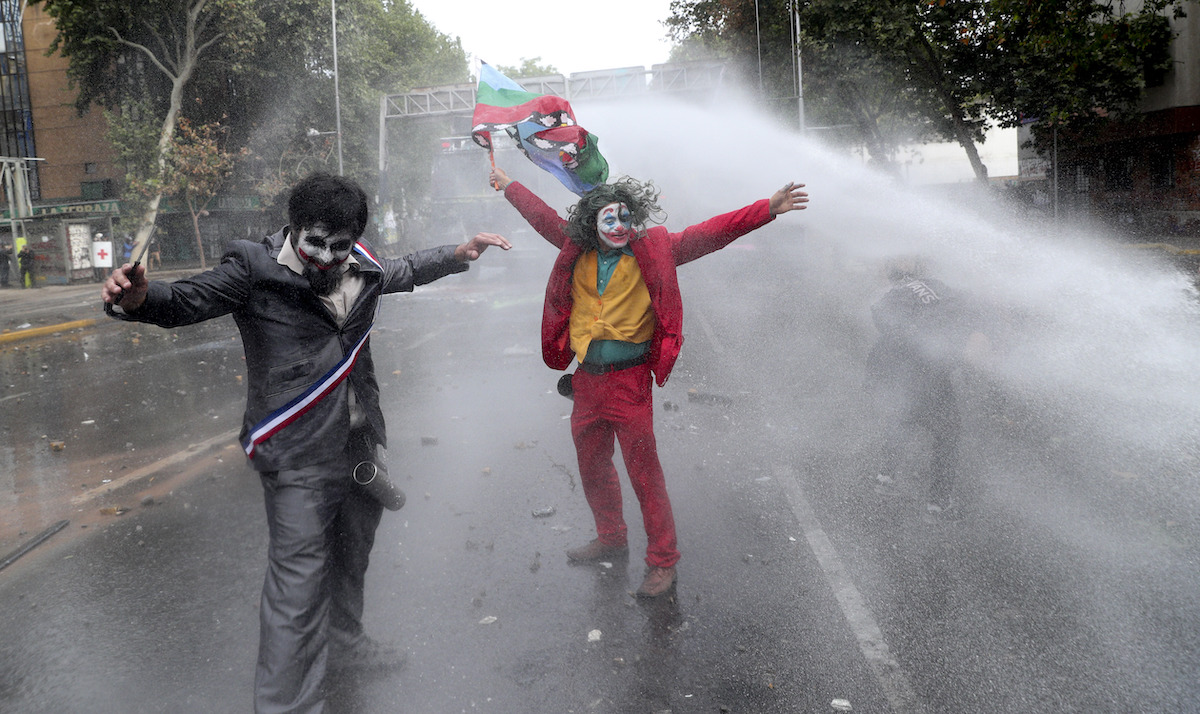 Men dressed as clowns, one dressed as the the movie character “The Joker” flying a Mapuche indigenous flag, are sprayed by a police water cannon during an anti-government protest in Santiago, Chile, Monday, Nov. 4, 2019. (AP Photo/Esteban Felix)

Many protesters are demanding a new constitution to replace the 1980 charter written under Gen. Augusto Pinochet’s 1973-1990 military dictatorship. It allows many social services and natural resources, including water, to be wholly or partially privatized.

From afar, Chile has been viewed a regional success story under democratically elected presidents on the left and right. A free-market consensus has driven growth up, poverty down and won Chile the Latin America’s highest score on the United Nations Human Development Index, a blend of life expectancy, education and national income per capita.

And in 2010, Chile became the second Latin member of the Organization for Economic Cooperation and Development, after Mexico.

But a 2017 UN report found that the richest 1% of Chile’s population earns 33 percent of the nation’s wealth. That helps make Chile the most unequal country in the OECD, slightly worse than Mexico.

President Sebastián Piñera is a billionaire and one of the country’s richest men. Piñera has replaced the heads of several ministries with generally younger officials seen as more centrist and accessible and introduced a series of economic reforms, including increases in the minimum wage and lowest state pensions. But he has struggled to contain the protests and is facing calls to resign.

“The challenge for the movement is too keep the pressure on Piñera. As the government and the opposition are now negotiating reforms and Congress is advancing some of those reforms, there are high chances of the movement splitting into the more radical and the moderate wings,” said Patricio Navia, a political scientist at New York University.

“The radical wing wants Piñera to resign and the more moderate groups want to cash in and get some reforms passed that will have a positive impact on the lives of people, especially increases in pensions and the minimum wage,” he said.