The Overwhelming Brownness of Julián Castro and Me 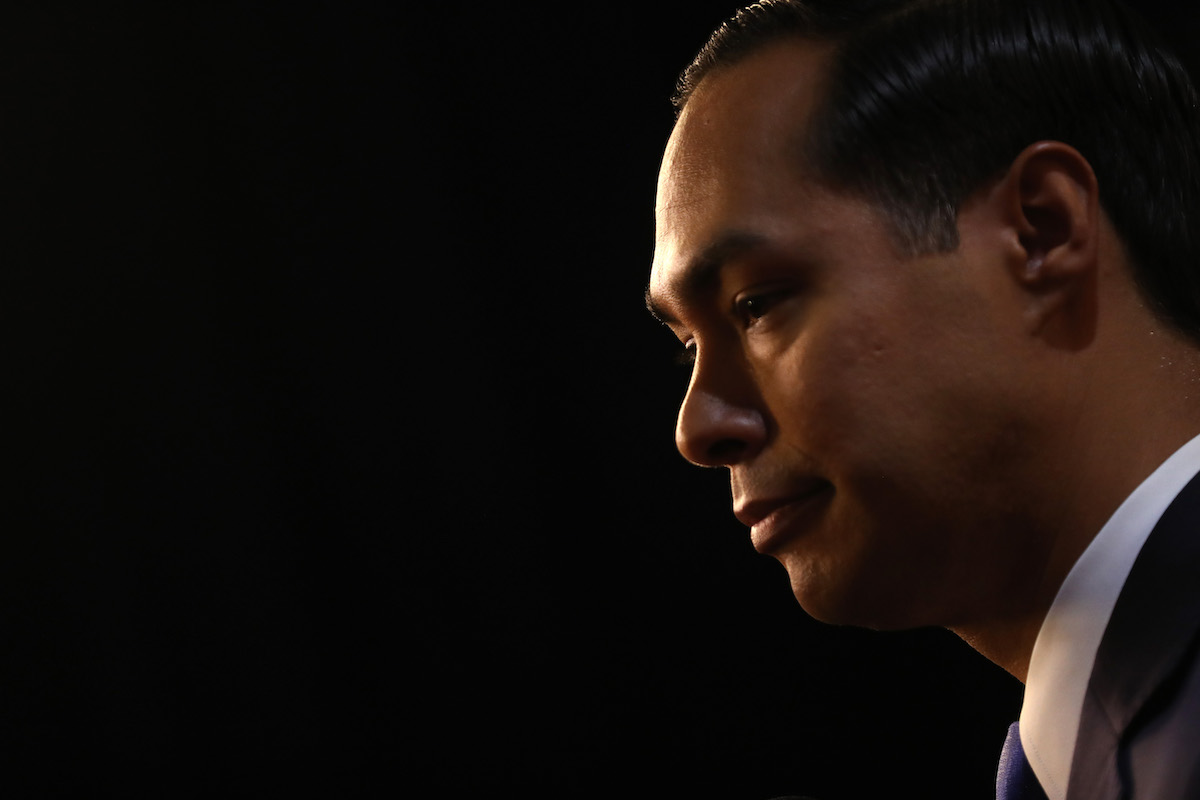 Julián Castro in the spin room after the Democratic Presidential Debate at Texas Southern University on September 12, 2019 in Houston, Texas. Photo by Justin Sullivan/Getty Images)

A comorbid combination of xenophobia, cultural racism, anti-Brownness, and anti-Brown men sentiments helped elect an outright bigot. It has also kept Julián Castro, one of the most qualified men, from receiving the same amount of consideration and enthusiasm as the mediocre white men running for office enjoy.

We also all know that a huge chunk of North America considers anyone of Hispanic descent Mexican. Hell, I am an Afrocaribbean man that reads as a mestizo when I wear my hair short. [Do you already see the assumption that Mexican equals mestizo/Brown?]. When my articles go viral, most of the Internet assumes I’m a Brown Mexican man. And it’s not just white America that assumes this. My people do, too, based on arbitrary phenotypes that can also be found in Africa, but add a Spanish first and last name, César Vargas, and voilà, I read, I present as some kind of indigenous from Latin America. I am not. I may be treated as a Brown man, a Brown immigrant when my hair is short, but I am not. Reading as mestizo, however, has brought me privileges within Hispanidad: I can speak freely about us within and outside of our culture without getting side-eyed as a Black usurper.

I exist in this weird American realm of Blackness and Brownness—even when I don’t claim indigeneity.

If my name had been Shaun King instead of César Vargas, what race would you consider me? What’s the difference between me and Beyoncé, Lenny Kravitz, Jay Smooth, Malcolm X, Prince, the DeBarge family? 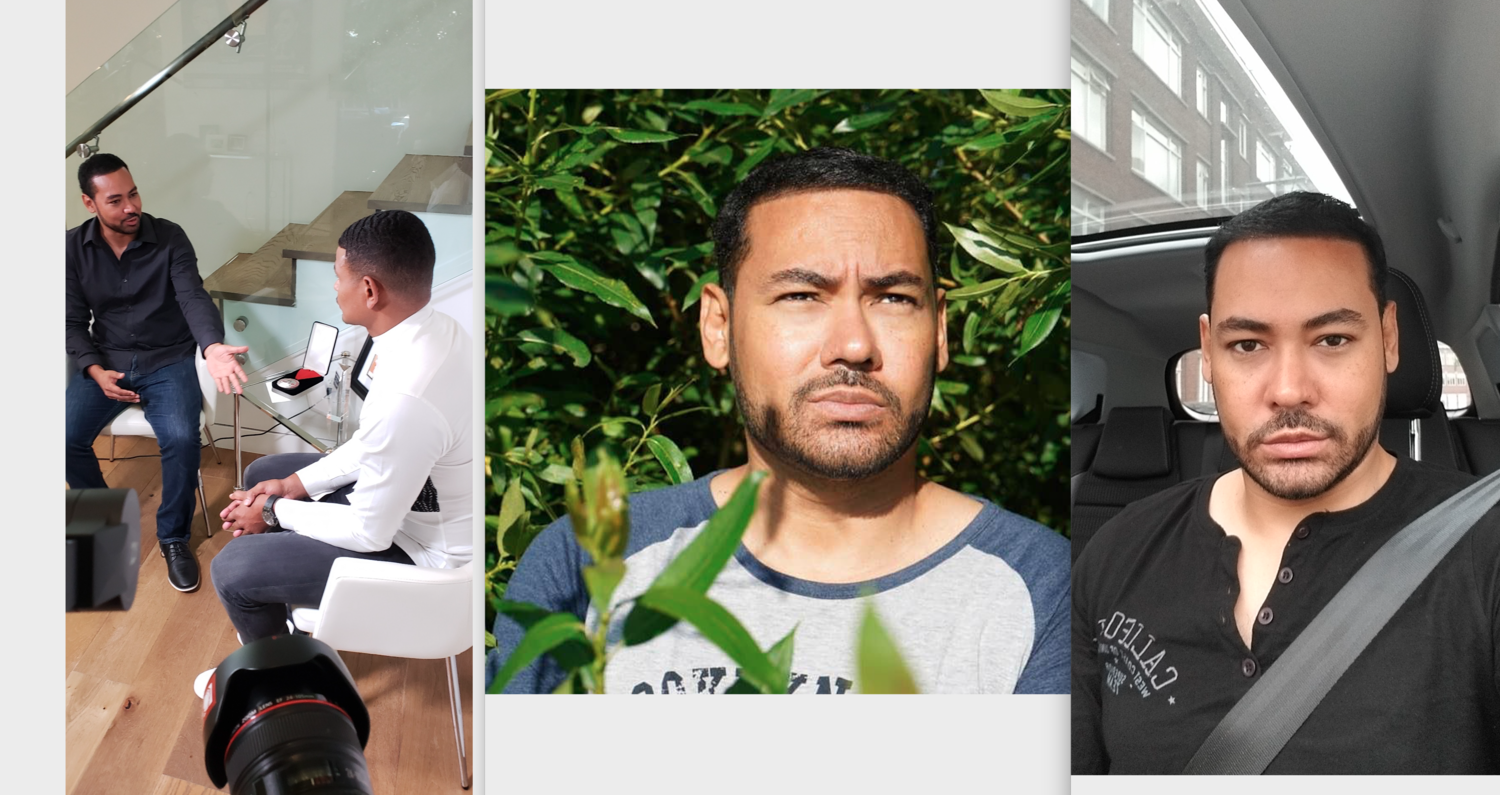 The Internet doesn’t care, though. It doesn’t care that the indigenous people of the island I come from were exterminated. I am a combination of African and European—like most of the Black Diaspora. Nevertheless, Neo-Nazi forums persist and call me a wetback. To make things even more complicated, there’s another César Vargas with a bigger profile than mine. So unfortunate souls come to my social media handles when he’s trending, to give him a hard time, only to enter a vortex of zero-fucks-given because I ain’t nothing to play with—especially to racists and vendidos. I rebuke respectability politics. 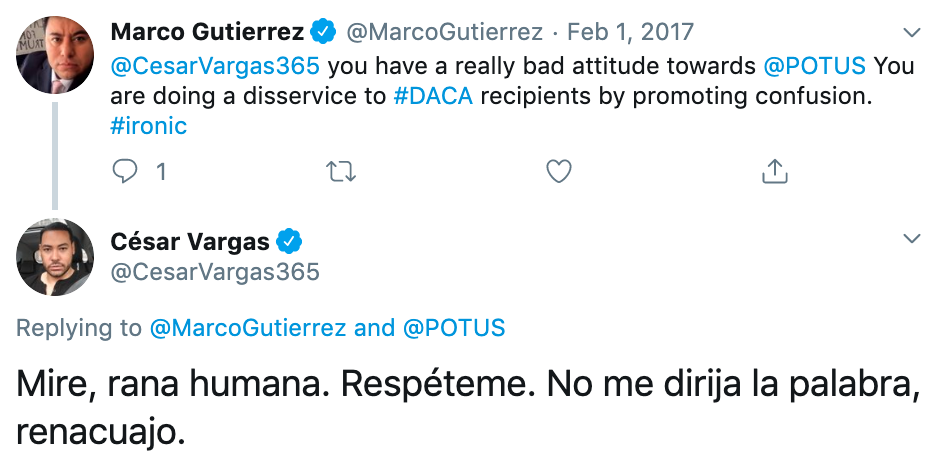 “Look, human toad. Respect me. Don’t address me, you tadpole.” My response to Donald Trump stan, Marco Gutierrez. The “Taco Truck on Every Corner” guy. For the record: he was too chickenshit to respond.

Some Hispanics are mad I consider myself Black. I suspect because they want to embrace me —one of the few unapologetic Latino voices that have gotten published in mainstream magazines— as one of their own but without the messiness of race getting in the way. Most people are just getting around to the existence of a Black populace of Latin American descent that isn’t Haitian, Non-Spanish speaking West Indian, Brazilian… Others dismiss it, because how could I be with such a Brown look? Now imagine that light-skinned Black Latinx folks exist without attaching them to Brownness. Most of you can’t fathom that. We can’t even fathom it. So, I’m a Brown man in your eyes and treated as such by American culture. What is a Brown look, anyway?

The concept of Brownness hasn’t really been mapped out too clearly in the United States. What is Brown? Who is Brown? Do we include Native Americans? Are Southern and Southeast Asians not Brown? For argument’s sake, let’s humor the USian idea of Brownness only existing in people of Latin American descent. In this instance, and more specifically, the Brownness of Latino men.

Brownness is a complex concept and just like the concept, so are Brown people. Mestizaje, for instance, is considered anti-Black by certain advocates because it lumps many people who aren’t Brown together —Black, White, a mix of the two, Asians— for the sake of a supposed united race of people that treat each other as equals. Some of us that live under this strange race-thnicity called Hispanidad are keenly aware of its perils and hierarchies. And though those hierarchies place Brown Latino men somewhere under white Hispanics, they still face unprecedented discrimination outside of Hispanidad. I know. I’ve lived them.

Consider the case of José Zamora:

The man changed his name to Joe to find a job. He applied to hundreds of jobs with his given names—to no avail. But as soon as he anglicized his first name he started getting call-backs. That’s one of many indignities we face. Indignities that bring immeasurable material difficulties to our lives that ricochet throughout our community. I know. I’ve been passed over for many, many, many mediocre people despite being considered some brilliant anomaly that synthesizes information like a machine.  Some of you reading this have recommended me, only to be passed over, to your chagrin, for someone you know will fuck up down the road. You understand. You’d think that someone with such an intimidating résumé (a friend’s word) would be snatched up immediately. But alas, they don’t want us and if they do, we have to be really, really meek to the point of invisibility.

I have never gotten a call back from Linkedin, Glassdoor, Monster.com, Mandy.com, Global Jobs, Craigslist, HBO, Disney, Time Warner… I’ve worked primarily with Hispanic entities and that’s because someone I know, usually an executive that likes me, sings me praises, but that’s not always received well. Especially when you try to do right. I am at the mercy of my tormentors —both white and Hispanic. They fail to see that treating me like shit is a reflection of themselves— that it hurts them more than they care to admit because they’re upholding a white supremacy that tells them to be humble, to be quiet, to stay out of the way, to not be seen and if we are seen we have to be good immigrants. God forbid we be human. God forbid we excel at anything.

Now consider Julián Castro. The man didn’t even drop the accent from his name. My birth certificate doesn’t have it, but I doubled-down because I’m a hot-head, a cantankerous Latino and put it on César. Ask yourselves, if Julián didn’t come from a line of known civil rights activists and if he hadn’t been appointed by President Obama as secretary of HUD, would he have gotten this far? Picture the privileges, the social network, net worth, the generational wealth and capital of the others running. Now ask yourselves why is he trailing behind most Democratic candidates vying for the White House if the man is sharper, more eloquent, more progressive than most of his opponents? 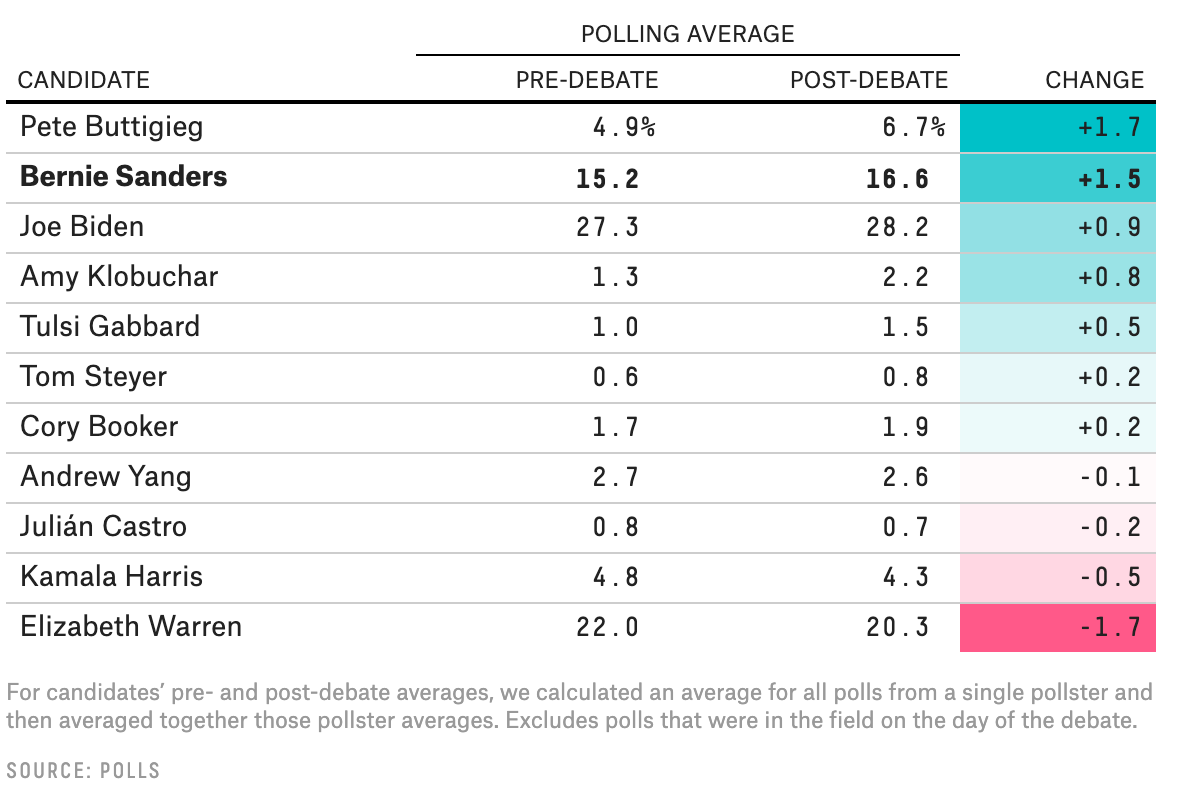 He doesn’t even register here: 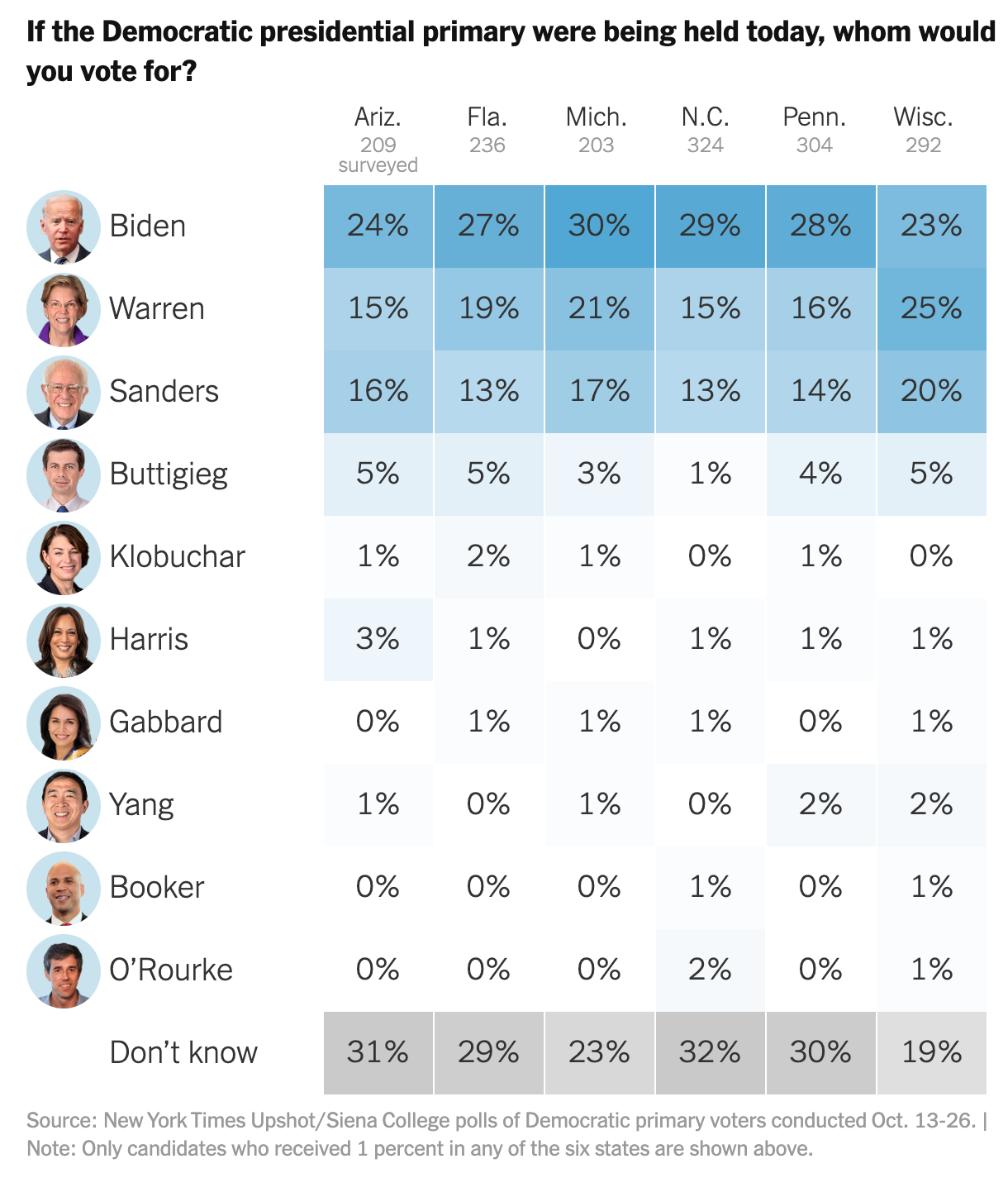 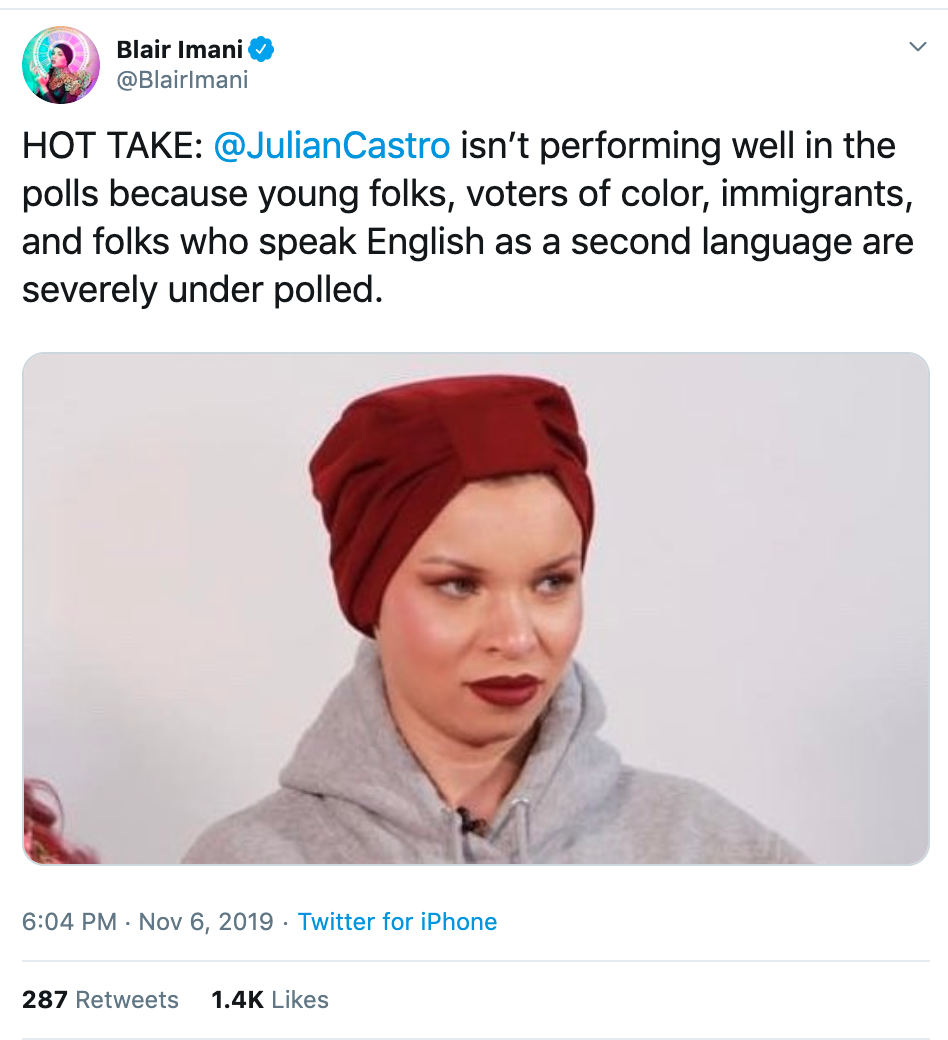 But it’s not just the polling. It’s the culture. A culture that hates us. A culture that has erased from history books the lynching of Mexicans and their descendants. A culture that doesn’t want to see us outside of those boxes it created for us. Even though there are some questionable to downright problematic comparisons, let’s humor Chris Rock’s speech for a moment:

But forget whether Hollywood is black enough. A better question is: Is Hollywood Mexican enough? You’re in L.A, you’ve got to try not to hire Mexicans. It’s the most liberal town in the world, and there’s a part of it that’s kind of racist—not racist like ‘F— you, n—-r’ racist, but just an acceptance that there’s a slave state in L.A. There’s this acceptance that Mexicans are going to take care of white people in L.A. that doesn’t exist anywhere else. I remember I was renting a house in Beverly Park while doing some movie, and you just see all of the Mexican people at 8 o’clock in the morning in a line driving into Beverly Park like it’s General Motors. It’s this weird town.

You’re telling me no Mexicans are qualified to do anything at a studio? Really? Nothing but mop up? What are the odds that that’s true? The odds are, because people are people, that there’s probably a Mexican David Geffen mopping up for somebody’s company right now. The odds are that there’s probably a Mexican who’s that smart who’s never going to be given a shot. And it’s not about being given a shot to green light a movie because nobody is going to give you that—you’ve got to take that.

The shot is that a Mexican guy or a black guy is qualified to go and give his opinion about how loud the boings are in Dodgeball or whether it’s the right shit sound you hear when Jeff Daniels is on the toilet in Dumb and Dumber. It’s like, ‘We only let white people do that.’ This is a system where only white people can chime in on that. There would be a little naiveté to sitting around and going, ‘Oh, no black person has ever green lighted a movie,’ but those other jobs? You’re kidding me, right? They don’t even require education. When you’re on the lower levels, they’re just about taste, nothing else. And you don’t have to go to Harvard to have taste.

Julián Castro is miles above most of his peers, but why isn’t he treated as such? Again, it’s the culture. A culture that hates Latino men. And the Browner you look, the Blacker you look, the more it hates you, the more it wants to erase you, the more it wants you to disappear. I am keenly aware that white America doesn’t want to see people who look like me as showrunners, leading in films, shows, in boardrooms, talking about politics or any other topic besides immigration (or even Latinidad)… 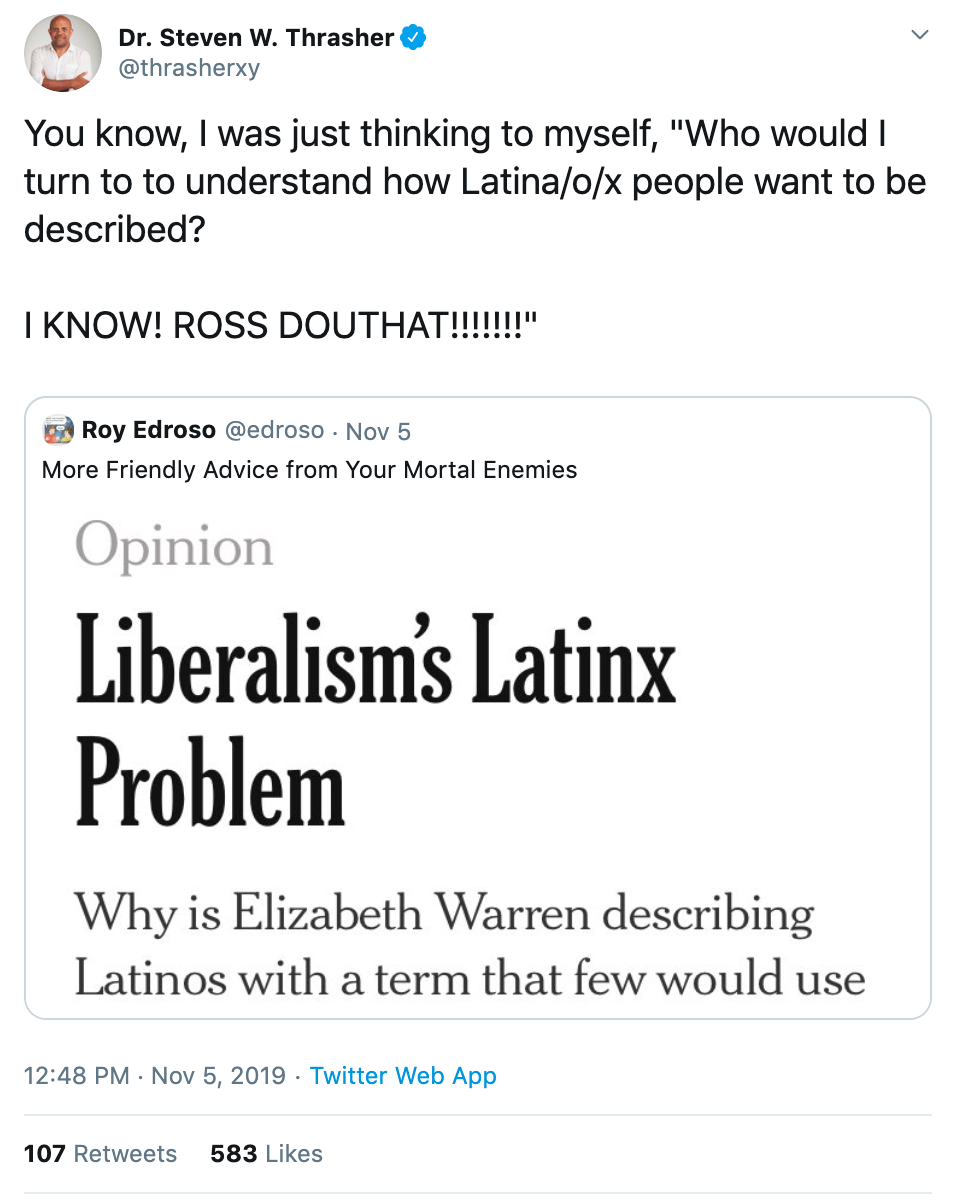 Hell, if Julián Castro doesn’t even register in most polls, a Brown Latino man with such a big profile and even more intimidating résumé, imagine what other Brown (and Black) presenting men with Spanish surnames go through.

Now imagine what Brown and Black Latinas go through.

A mainstream or indie magazine would usually pay me between $250-$450 for one of my pieces. Since I decided to go solo for the sake of keeping my voice unedited and uncensored, I created this website. Keeping it afloat and these pieces coming is not just time-consuming, but it’s also costly because it angers a lot of those same mainstream papers and magazines (along with their donors) for calling them out—so their favorite retaliation tactic is deplatforming. Especially of unapologetic and unhypocritical Black and Brown voices. Ideally, I’d like to raise between $250-$450 per piece and many of you have actually stepped up to the plate and helped me accomplish that. For that, I thank you from the bottom of my heart. If you would like to see more of these and support one of the few unbought indie voices, please contribute:

Stand with the independent writers of the world.

César Vargas is an award-winning writer, advocate, strategist, speaker, and social critic with a loyal following and a robust social capital that spans from coast to coast: Journalists, celebrities, activists, artists, executives, politicians, and more. He tweets from @CesarVargas365. His main site is cesarvargas365.com.

3 responses to “The Overwhelming Brownness of Julián Castro and Me”