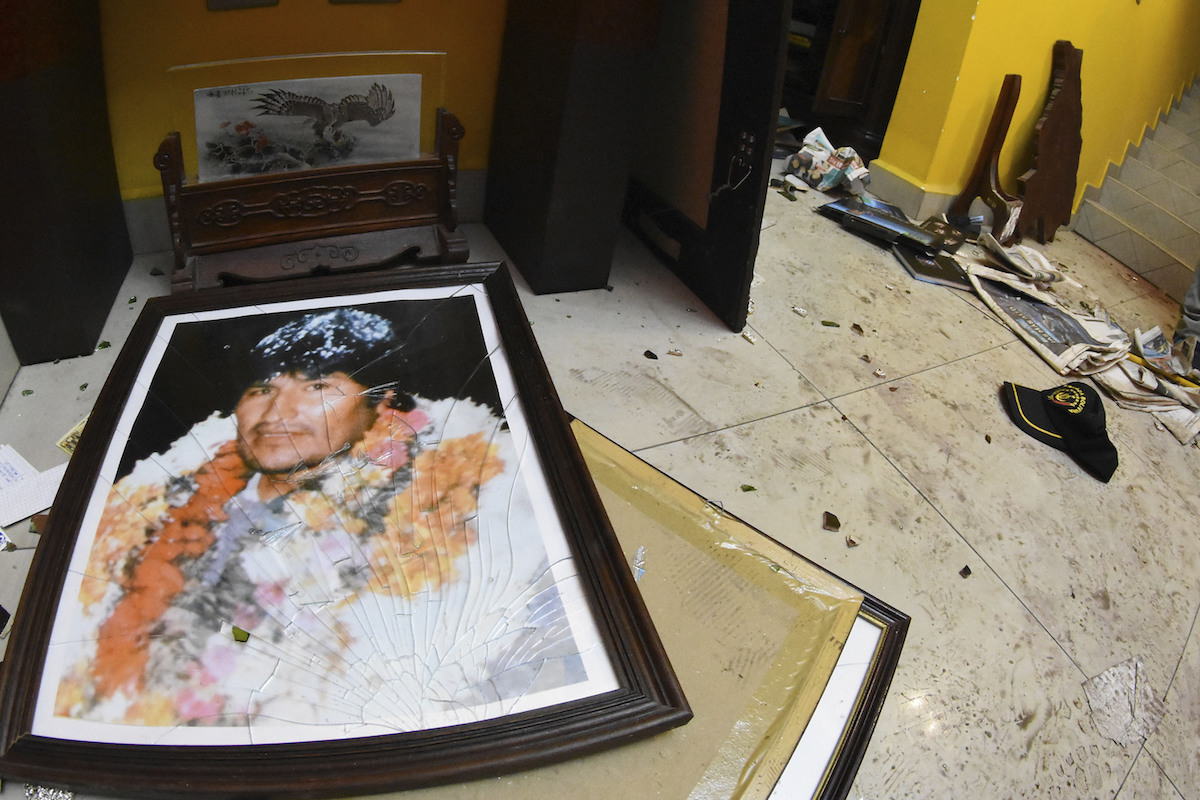 A broken portrait of former Bolivia’s President Evo Morales is on the floor of his private home in Cochabamba, Bolivia, after hooded opponents broke into the residence on Sunday, Nov. 10, 2019. (AP Photo)

LA PAZ, Bolivia (AP) — Bolivia entered a sudden era of political uncertainty on Monday as President Evo Morales, pushed by the military and weeks of massive protests, resigned after nearly 14 years in power and seemingly every person constitutionally in line for the job quit as well.

Crowds of jubilant foes of the socialist leader celebrated in the streets with honking horns and fireworks after Morales’s announcement Sunday, treating as a triumph of democracy the ouster of a man who pushed aside presidential term limits and claimed victory in a widely questioned October election.

“We are celebrating that Bolivia is free,” said one demonstrator near the presidential palace.

But others —including Morales himself— saw it as a return to the bleak era of coups d’etat overseen by Latin American militaries that long dominated the region. Morales stepped aside only after the military chief, Gen. Williams Kaliman, called for him to quit to allow the restoration of peace and stability.

Morales earlier in the day had already accepted calls for a new election by an Organization of American States team that found a “heap of observed irregularities” in the Oct. 20 election whose official result showed Morales getting just enough votes to avoid a runoff against a united opposition.

It wasn’t immediately clear who would succeed Morales, or how his successor would be chosen.

His vice president also resigned as did the Senate president, who was next in line. The only other official listed by the constitution as a successor, the head of the lower house, already had resigned. 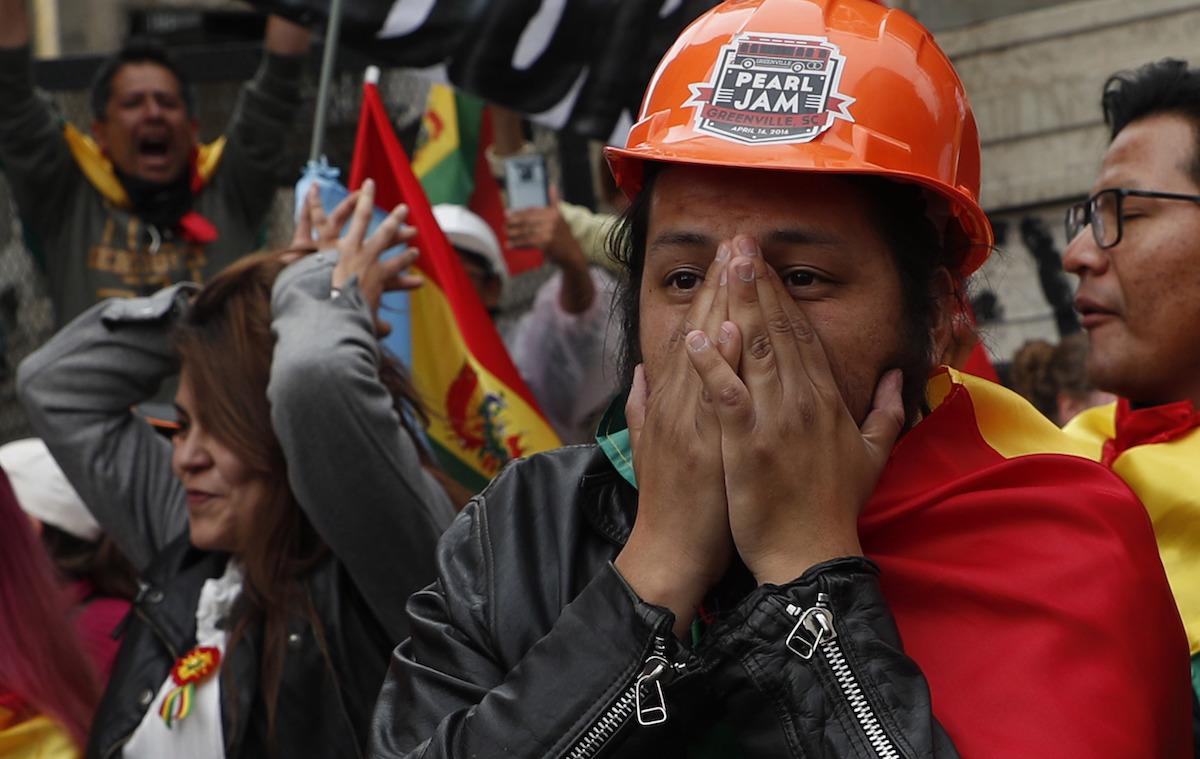 There were no immediate signs that the military itself was maneuvering for power, but “I think we have to keep a close eye on what the military does over the next few hours,” said Jennifer Cyr, associate professor of political science and Latin American studies at the University of Arizona. “Are they overstepping their role?”

She said “the power vacuum opens up space for the military to potentially step in.”

Morales was the first member of Bolivia’s indigenous population to become president and he brought unusual stability and economic progress, helping cut poverty and inequality in the impoverished nation, and he remains deeply popular among many Bolivians. Backers of the president have clashed with opposition demonstrators in disturbances that have followed the October vote.

After nightfall, there were reports of tensions in La Paz and the neighboring city of El Alto, with reports of looting and burning of public property and some houses.

The leadership crisis had escalated in the hours leading up Morales’ resignation. Two government ministers in charge of mines and hydrocarbons, the Chamber of Deputies president and three other pro-government legislators announced their resignations. Some said opposition supporters had threatened their families.

In addition, the head of Bolivia’s Supreme Electoral Tribunal, María Eugenia Choque, stepped down after the release of the OAS findings. The attorney general’s office said it would investigate the tribunal’s judges for possible fraud, and police later said Choque had been detained along with 37 other officials on suspicion of electoral crimes.

Morales, whose whereabouts were unknown, went on Twitter late Sunday to claim authorities were seeking to arrest him, but police Gen. Yuri Calderon denied any apprehension order had been issued for him.

In his tweet, Morales said: “I report to the world and Bolivian people that a police officer publicly announced that he has instructions to execute an unlawful apprehension order against me; in addition, violent groups also stormed my home.”

Armed intruders did break into Morales’ home in Cochabamba.

Mexico’s government reported Sunday night that 20 members of Bolivia’s executive and legislative branches were at the official Mexican residence in the capital seeking asylum.

Mexican Foreign Secretary Marcelo Ebrard also said on Twitter that Mexico would offer asylum to Morales if should ask for it, though there was no indication he had.

Morales was elected in 2006 and went on to preside over a commodities-fed economic boom in South America’s poorest country. The combative former leader of a coca growers union paved roads, sent Bolivia’s first satellite into space and curbed inflation.

But even many backers eventually grew wary of his reluctance to leave power.

He ran for a fourth term after refusing to abide by the results of a referendum that upheld term limits for the president—restrictions thrown out by a top court critics claimed was stacked in his favor.

After the Oct. 20 vote, Morales declared himself the outright winner even before official results indicated he obtained just enough support to avoid a runoff with opposition leader and former President Carlos Mesa. A 24-hour lapse in releasing results fueled suspicions of vote-rigging.

The government accepted an OAS team sent to look into the election, and that group called for a new contest with a new electoral tribunal.

“Mindful of the heap of observed irregularities, it’s not possible to guarantee the integrity of the numbers and give certainty of the results,” the OAS said in a statement.

The U.S. State Department issued a statement calling for the OAS to send a mission to Bolivia to oversee the electoral process. “The Bolivian people deserve free and fair elections,” it said.

The state news agency ABI said Morales announced his resignation from Chapare province, where he began his career as a union leader. At the end of his speech, he said he was returning to Chapare.

“I return to my people who never left me. The fight goes on,” he said.

LA PAZ, Bolivia (AP) — The latest on the political crisis in Bolivia (all times local):

The European Union is calling for calm in Bolivia and says it stands ready to send election observers to monitor any new polls if a request is made.

EU foreign policy chief Federica Mogherini says the bloc’s foreign ministers weighed Monday whether to send a monitoring team and agreed that “if the conditions are right, we will be ready to work on it.”

Mogherini says the EU hopes that credible elections can be held soon “most importantly, avoiding any form of violence from any side, and showing a level of statesmanship that is needed in this moment.”

Morales resigned on Sunday following weeks of protests and a call from the military for him to quit. His departure left a power vacuum in the country.

—By Lorne Cook in Brussels

Bolivian opposition leader Carlos Mesa says former President Morales was brought down by a popular uprising, not the military.

Mesa’s comments on Monday were part of a growing dispute over whether Morales’ resignation on Sunday was the result of a military coup.

Mesa says there was no coup and that the military had made a decision not to deploy in the streets because “they didn’t want to take lives.”

Bolivia’s military chief had said on national television that Morales should resign so that order could be restored following a disputed election. Morales did so soon afterward.

Morales is lashing out at his opponents on social media.

Morales on Monday tweeted that opposition leaders Mesa and Luis Fernando Camacho had instigated a coup against him. 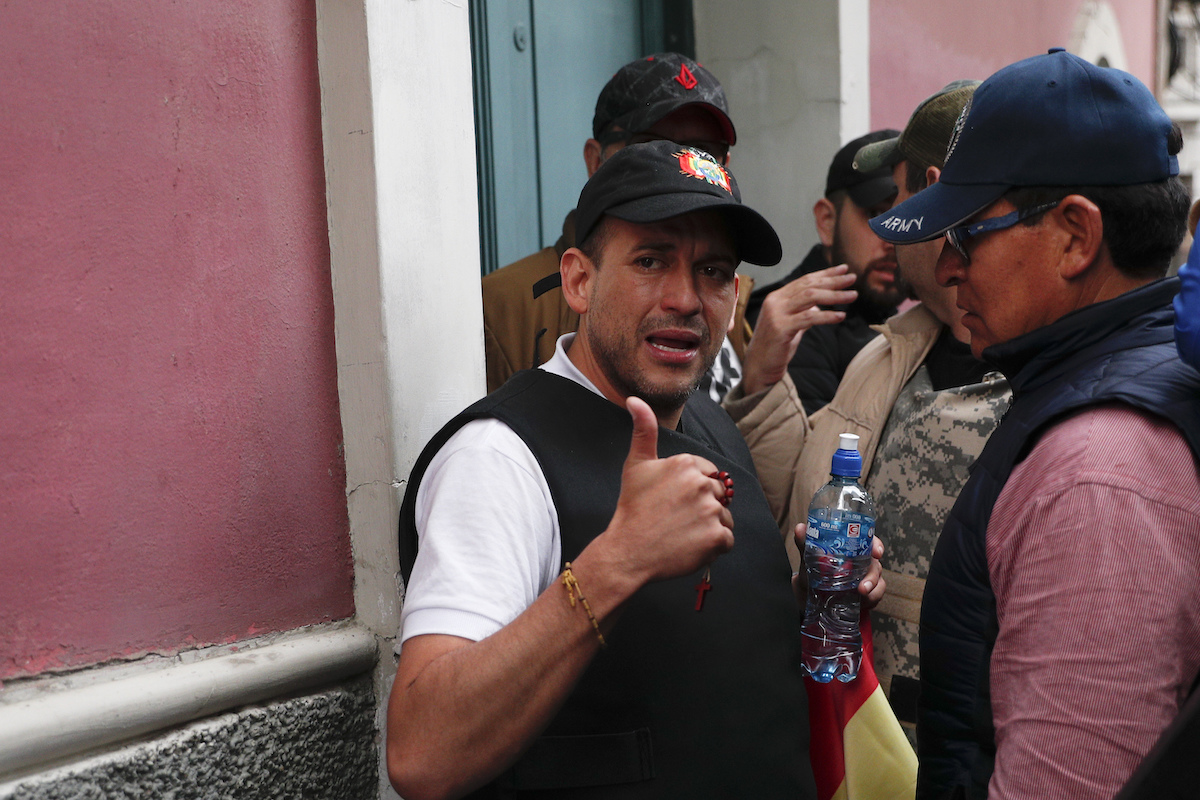 Opposition leader Luis Fernando Camacho gives a thumbs up outside the presidential palace in La Paz, Bolivia, after President Evo Morales announced his resignation to the presidency on Sunday, Nov. 10, 2019. (AP Photo/Juan Karita)

Opponents “lie and try to blame us for the chaos and violence that they provoked,” Morales said.

Bolivia’s first indigenous president resigned on Sunday after the military called for him to quit, and following weeks of protests since a disputed election.

The state news agency ABI said Morales announced his resignation from Chapare province, where he began his career as a union leader.

Mexico is describing the ouster of Morales as a military coup.

Ebrard, the Mexican foreign minister, said Monday that the Bolivian military’s call for Morales to resign had violated “the constitutional order” in Bolivia.

Ebrard says Mexico still considers Morales to be the legitimate leader of Bolivia and that the Organization of American States should hold an emergency meeting to discuss the crisis there.

The Mexican foreign minister indicated that Morales, who resigned Sunday, would be welcome to seek asylum in Mexico.

“What happened yesterday is a step back for the whole continent,” Ebrard said. “We’re very worried.”

—By María Verza in Mexico City

Spanish Foreign Minister Josep Borrell says Spain is worried by the power vacuum in Bolivia following the resignation of Morales.

Morales was pushed by the military and weeks of massive protests after an Oct. 20 national election was marred by allegations of fraud.

“We are worried because we don’t know who is going to take on this process and because it was the intervention of the army calling on the president to step down that has created this power vacuum,” Borrell told reporters Monday.

Borrell, who takes over as the European Union’s diplomacy boss in December, called for elections to be held in the country as soon as possible and for security to be preserved for all Bolivians, including Morales and his aides.

—By Aritz Parra in Madrid.

Angry supporters of Morales have set up barricades to block roads leading to the country’s main airport.

A large mural near the airport in the city of El Alto read: “Evo: the people need you.”

Morales resigned on Sunday after nearly 14 years in power. He was forced out by the military and weeks of massive protests over a disputed election that he claimed to have won.