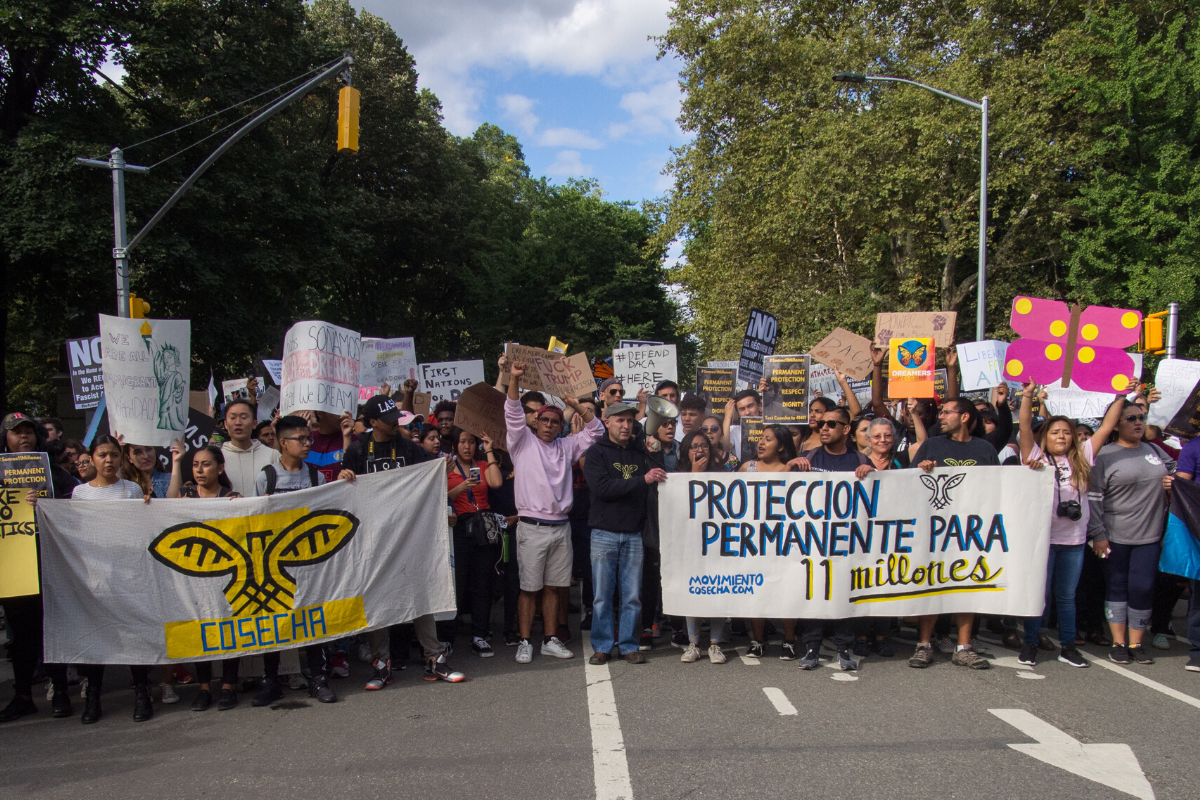 March and rally/protest in response to the rescission of Deferred Action For Childhood Arrivals (DACA) in New York City on September 9, 2017. (Photo by Rhododendrites/CREDIT)

This Tuesday morning, November 12, 2019, the Supreme Court of the United States will hear the first oral arguments on the constitutionality of Deferred Action for Childhood Arrivals (DACA).

I was first approved for DACA in 2014, my freshman year of high school. I grew up in a small town in North Carolina, where living as a Brown and undocumented immigrant woman was a constant reminder of the anti-immigrant rhetoric and discrimination that continues to live in the rural South.

This is the reality for many working class undocumented immigrants. The media often portrays and uplifts the toxic good immigrant narrative. From the beginning of the introduction of the Dream Act in 2001, the constant narrative has only been about university students who are undocumented. However, this is often not the case. DACA is a symbolic temporary protection that has showed us the impact that protection from deportation can make in the lives of undocumented immigrants. DACA recipients are not just students. We are also heads of households, parents, workers, and yes, humans.

DACA has become an essential need for nearly 800,000 undocumented immigrants. The cancellation of this program has deeply affected through our community. Our fight is beyond DACA. The movement continues with or without DACA’s continuation. We know that the anti-immigrant and white supremacist administration never cared about the legality of DACA but only about who was benefiting. In order to receive DACA, immigrants must be deemed as noncriminals by the United States government. This cancellation only furthers the intentions of the Trump administration to instantly criminalize immigrants.

This is a point that immigrant and reproductive rights activist Alejandra Pablos touches on as an important part in our movement. We are not just fighting for DACA or even comprehensive immigration reform, but for the end of the criminalization of migration because the reality is this: citizenship does not protect us from criminalization.

It is essential to understand the consequences of these racist laws and how they target our immigrant community today. DACA is not the ultimate protection of our communities. We have seen cases of DACA recipients who were deported even with such said protection. Sergio Salazar (also known as Mapache) was unjustly deported after participating in an Occupy ICE action in San Antonio, Texas. They were deported as an anarchist extremist. This is an example of how immigrants are censored by the United States.

This November 12, 2019 will be an important date in history for our immigrant community. The Supreme Court will hear the DACA oral arguments and also the cases of Sergio Güereca and José Rodríguez, both of whom were murdered by Border Patrol officers while on Mexican soil. The court will decide if the families of Güereca and Rodríguez can sue the United States for the murder of their loved ones.

So November 12, 2019 is more than just about DACA—it is about the future of our community and the recognition of our humanity under Trump’s white supremacist administration.

Arlin Karina Téllez Martínez is a DACA recipient. She tweets from @postmodernrox_.