Why Is PayPal Suddenly Asking Me for My Social Security Number? 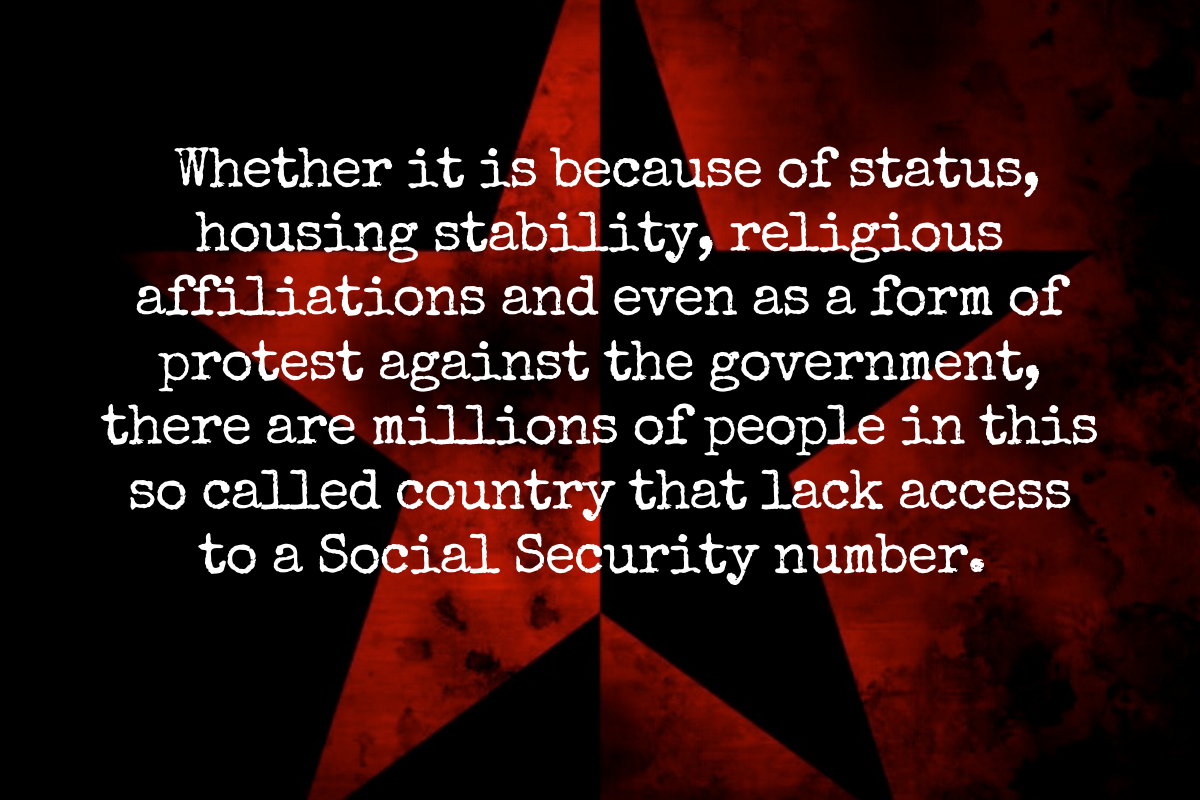 So… you’re saying PayPal is sequestering my funds until I provide them a Social Security number?”

James, a Paypal manager agreed that was the case only for a second. then backtracked.

I spent all day fighting PayPal over my grocery money.

Starting in July, immigrant justice advocates and social service providers began reporting mass numbers of  immigrant and mixed families experiencing discontinuation of social services as Trump’s administration continues its rampant attack on the poor, shredding social services expenditures and targeting millions of Medicaid and SNAP recipients. This happened to my own children (13 and six), who were born and raised in Virginia and up until recently received Medicaid and $200 each for food stamp benefits. With a little extra cash, a lot of couponing and farmer’s market trips (here in Virginia SNAP benefits count double when buying fresh produce directly from Virginia farmers), we were able to budget all my children’s monthly dietary needs with that much.

Since July, I have been working hard to make up that difference and picked up an amazing gig with a local POC-led homeschool co-op teaching decolonized history. Our first day together, the children led a demonstration at the local Columbus statue, demanding it be taken down and defying the lies of romanticized colonization. This amazing gig makes up for the loss to our house food budget. On Monday of last week they paid me via PayPal. I let that payment sit on my account unclaimed until Wednesday, which is grocery day.

Previously, PayPal has asked me for a Social Security number in order to obtain their cash card. Venmo and Cash App ask for the same in order to get their version of this card that can be used in any store with a chip reader. I did not need this service then, so I declined sharing that information with no problems. I have been using PayPal monthly for receiving my Patreon gifts for years, and until I can have a proper board meeting with The SANTOS en Virginia (a new state-wide immigrant bail and defense fund which I am helping co-lead in Virginia. We use it to collect monthly donations.

So when I moved to accept my payment and send it to my bank via my phone app a new screen came up asking me to agree to the new terms and conditions and verify my account. I quickly followed the screen as they asked for phone number verification, my complete (dead) name and address, more than I ever gave Venmo or Cash App. Then I was directed to a screen asking for the last digits of my social security number as a form of ID. No other options such as an ITIN or EIN number, much less an ID code from a foreign country’s ID were given as acceptable identifications.

I tried to go back on the app and ended up crashing it, having to log off and back on. My money still sat there on the screen, awaiting to be accepted. I tried again to accept it, and again, it sent me to the same screen. I then tried to send the money to a relative but it would not let me. Finally, I contacted the person that paid me to see if I could refund them. They called PayPal, asked for a refund and was notified by rep number one that I had to call in myself and request that money be refunded to the sender. I called and used the automated service options to do so. It made me go through a whole process between following instructions on the app and responding to links via text, I got the below screen and my app shut down again. 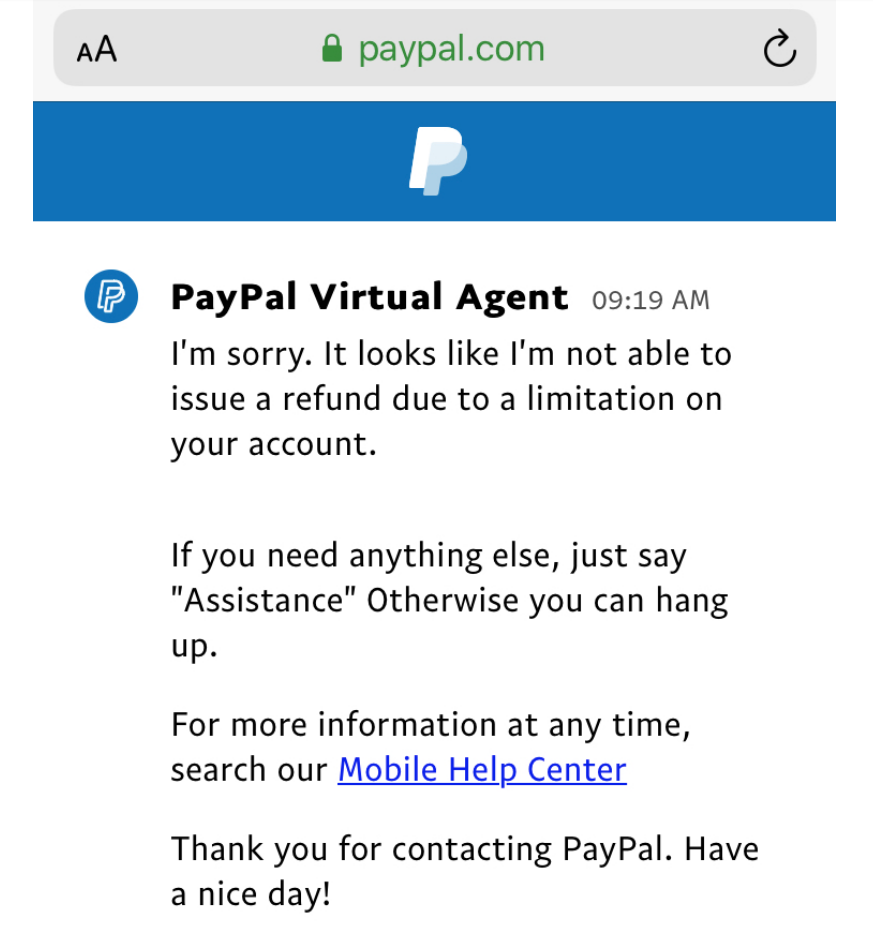 I called customer service back and ask the automated service recording to speak to a representative. I went through many options before the automated service told me that a person would do a call back. No option to even wait out the terrible elevator music was given. I had to accept a call back on their time on a matter that needed to be resolved immediately. Since it was grocery day,  I had time, and I am glad for it because I literally spent all day, back and forth. It was exhausting.

Eventually, I received a call and was told that a refund could be done but after being asked to be put on hold several times. I had a feeling I was getting handled. I was notified that because my account is on hold, that I could not make such a request for refunds after all.

I went full Karen and asked to speak to whomever was above them to override that hold and issue a refund adding that this seems to be targeting a vulnerable population and therefore discriminatory, I asked if PayPal is doing this to everyone who cannot provide Social Security numbers and the rep said yes without a second thought. I was told I would be called back (again!) by a manager who could further help resolve this issue.

For a company handling people’s money on an international scale, they sure skimp out on fully-staffed and well-trained customer service lines that can expedite these types of issues which I gathered from my conversations are recurring more and more since PayPal is withholding other people’s accounts like mine as a result of this mass move to obtain everyone’s personal information.

James announced himself as a manager when called me back and stuck to script. I advised him that if he was not able to help then to put me onto whomever above him could help me because I found him unable to deal with my request in a respectful manner since this is not just an issue of bad service but also discriminatory practices by the company. It is evident that PayPal doesn’t give their representatives the tools they need to provide good service. James became increasingly annoyed and downright rude to my questions, and after a while of trying to override the system, he notified me that without a Social Security Card to verify me, not even a refund could be done.

I told him that giving him a Social Security number isn’t necessary for a refund to another PayPal user and that they don’t need this level of verification systems anyway as they are not a banking institution. At the bottom of it all, this is discriminatory. Whether it is because of status, housing stability, religious affiliations and even as a form of protest against the government, there are millions of people in this so called country that lack access to a Social Security number.

James suggested W2’s, paystubs or anything that shows that number, that above point going over his head. I again explained to him that there are different people whom might not be able to provide that, myself included. He said that without a Social Security number from me NO ONE in PayPal could help me override the system. He went on to explain that without the input of a Social Security number, the system itself will keep anyone from doing anything to my account to address my refund situation. That’s when I asked him if PayPal is sequestering money. For clarification.

And for clarification, I told him not one bit of what he did was helpful for he was ill-equipped to talk with me about the absurdity of a money app demanding Social Security numbers now to access my funds after years of not asking for these unnecessary verifications in order to help.

Holding onto my money/my comrades’ refund is wrong, and the practices of the company are at the very least discriminatory and glib, at worse, targeting undocumented people, and at that worse, that is what German banks did during the Nazi regime. They froze the funds of those whom were deemed noncitizens.

I gave up on receiving a refund and instead focused on processing all the ways I struggle daily and then going to work. My comrade and director of the co-op tried to call PayPal and demand her money be released back to her. After much back and forth on her end, they agreed to call her back and do a three-way call with me so that I could approve the refund.

During our call back, we had to speak to a new manager whom still hit their script and went through the whole process down to the “ooops, can’t refund this without a social.” This manager confirmed that PayPal is doing this to other people and that the only person that could override this account hold so that they can provide a refund is the security department.

We were made to wait even longer and then transferred. After much advocating by my comrade for both herself and me as customers, the funds were finally released back to her.

I was told once again that my account will be on hold until I can provide a Social Security number for verification. I explained for the fourth time today why it is wrong to do so.

I never want to be in a space where I denigrate workers. It is not the fault of the people I interacted that PayPal made it damn near impossible to help me and provide the quality of care they are expected to provide by their employers. The men I spoke with were condescending and rude. They seemed amused by the entire situation, and that disrespect is entirely their fault. At least I was able to receive my money via Cash App, 12 hours after the issue arose.

I was also told repeatedly that other people were being subjected to this treatment as well.

Not until an American citizen stepped in and advocated for herself (and me) did customer service representatives give me much more than the same script. I was told that PayPal is an international company that handles a lot of money and many transactions, and that is why a Social Security number is asked as verification. He couldn’t answer me when I asked him why would an international company servicing all of the world ask for a specific U.S. document which again, many people in the U.S. have no access to. He couldn’t answer that beyond saying it’s a new policy/law.

No one could provide me the answers I needed.

I am Doctor Leonina Arismendi Zarkovic. I had to play Karen vs. the PayPal Managers and beat the final boss to get $100 back to me to feed my kids. I invite you to divest from PayPal for their discriminatory practices and to publicly question them on WHY are they doing this to their customers? If you’ve been affected, I invite you to fight back with me.

“These calls were monitored or recorded for quality assurance.”

2 responses to “Why Is PayPal Suddenly Asking Me for My Social Security Number?”