Cuban President Says US Pressures Are Failing: ‘We Will Keep Advancing Our Ideas’ 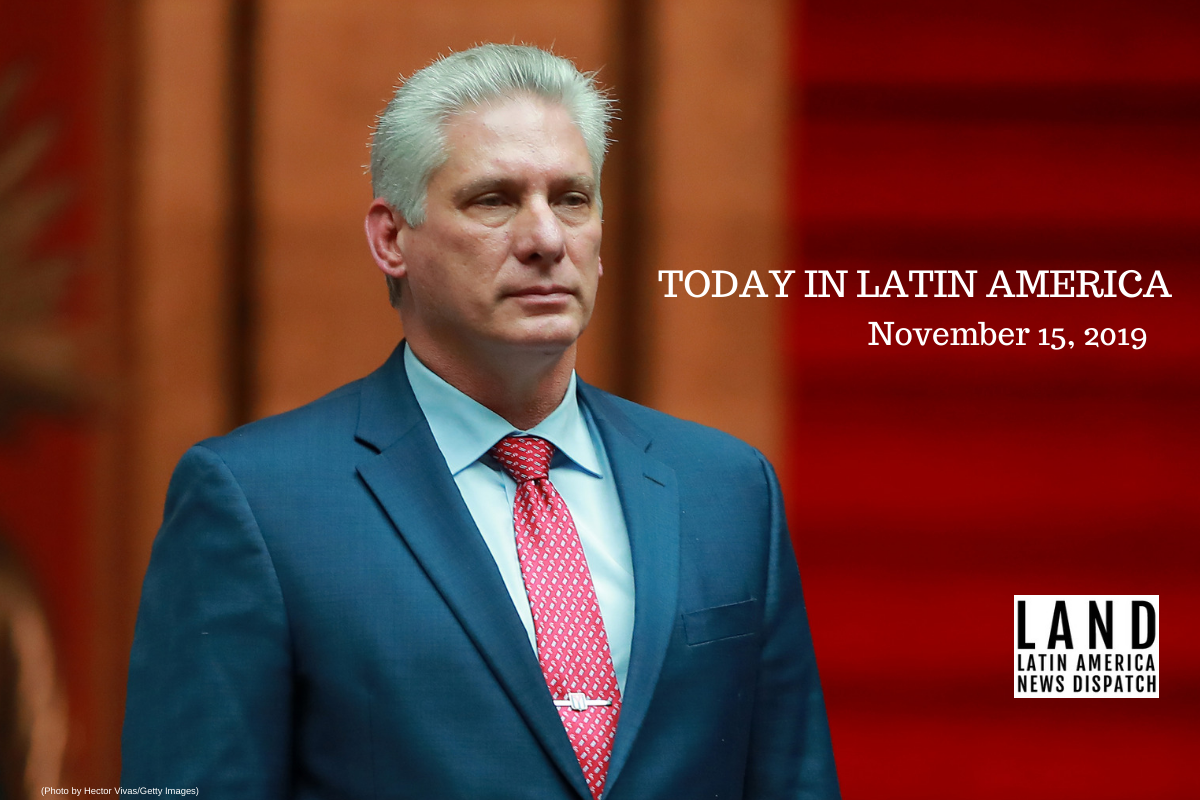 CUBA: President Miguel Díaz-Canel said yesterday that the Trump administration’s efforts to pressure the Cuban government are failing. “We will fight back. They will never defeat us, and with everyone’s help we will keep advancing our ideas and the country will keep advancing,” said Díaz-Canel, who spoke in Caimanera, the closest Cuban city to Guantanamo Bay. He told the crowd that the United States seemed “increasingly frustrated” at its failed attempts. The United States has steadily increased decades-long embargoes over the last few months, with the hope that increased economic pressure will prevent the Cuban government’s support of Venezuelan President Nicolás Maduro.

ECUADOR: A Canadian mining company opened the first large-scale gold mine in Ecuador’s Amazon rainforest yesterday. Lundin Gold Inc.’s Fruta del Norte Mine sits along a massive reserve of the precious metal that is to be expected to produce 350,000 ounces a year. President Lenín Moreno eliminated taxes on mining to incentivize investment from the extractive industry amid a stalling economy.

REGION: United Nations bodies have called for urgent action addressing increased rates of malnutrition and obesity across Latin America and the Caribbean. The United Nations Food and Agricultural Organization (FAO), the World Health Organization (WHO) and UNICEF issued the warning in the 2019 Panorama of Food and Nutritional Security, which stated that the Caribbean had the highest increase of obesity in 2019, which rose from 6% of the population to 25% of the population. According to the UN, more than 600,000 people die in Latin America and the Caribbean from obesity-related diseases each year, and the region has the highest global rate of malnutrition from high-calorie intake. The report recommended increased social programs aimed at promoting healthy eating and physical activity, as well as stricter food regulations.

NICARAGUA: The son of President Daniel Ortega, Juan Carlos Ortega Murillo, threatened violence against his father’s opposition on Wednesday evening, after announcing the creation of a new “May 4” Sandinista movement, according to La Prensa. Speaking in front of the headquarters of the Higher Council of Private Enterprise (COSEP), Ortega Murillo called the organization “enemies of real democracy and social justice.” He said the movement and his statements were not related to his father’s administration but represent the “organized people” of Nicaragua. He also warned that “freedom is not won with flowers, but with bullets.” Ortega Murillo manages Nicaragua’s Channel 8 news station and is a director of Telesur.

MEXICO: Yesterday, Mexico’s Supreme Court ruled that a law banning e-cigarette sales is unconstitutional. The court stated that e-cigarettes can be sold “under the same conditions as products containing tobacco.” Mexican law currently allows for the regulated sale of tobacco but prevents the sale of “any object that does not contain tobacco” but is packaged such that it might appear to be tobacco.

UNITED STATES-VENEZUELA: In response to U.S. sanctions on Venezuelan oil companies, ship captains have begun “going dark” to avoid detection as they move oil out of Venezuela to Russia, China and India. When the Trump administration banned U.S. companies from working with Venezuelan state-run oil company PDVSA earlier this year, PDVSA’s fleet of tankers was barred from U.S. ports. United Nations maritime treaties require ships of over 300 tons to use an automated identification system to avoid collisions, in order to assist in rescues and prevent oil spills. However, Israeli maritime analytics firm Windward reports that there have been 14 suspicious dark activities near Venezuela since sanctions were imposed.