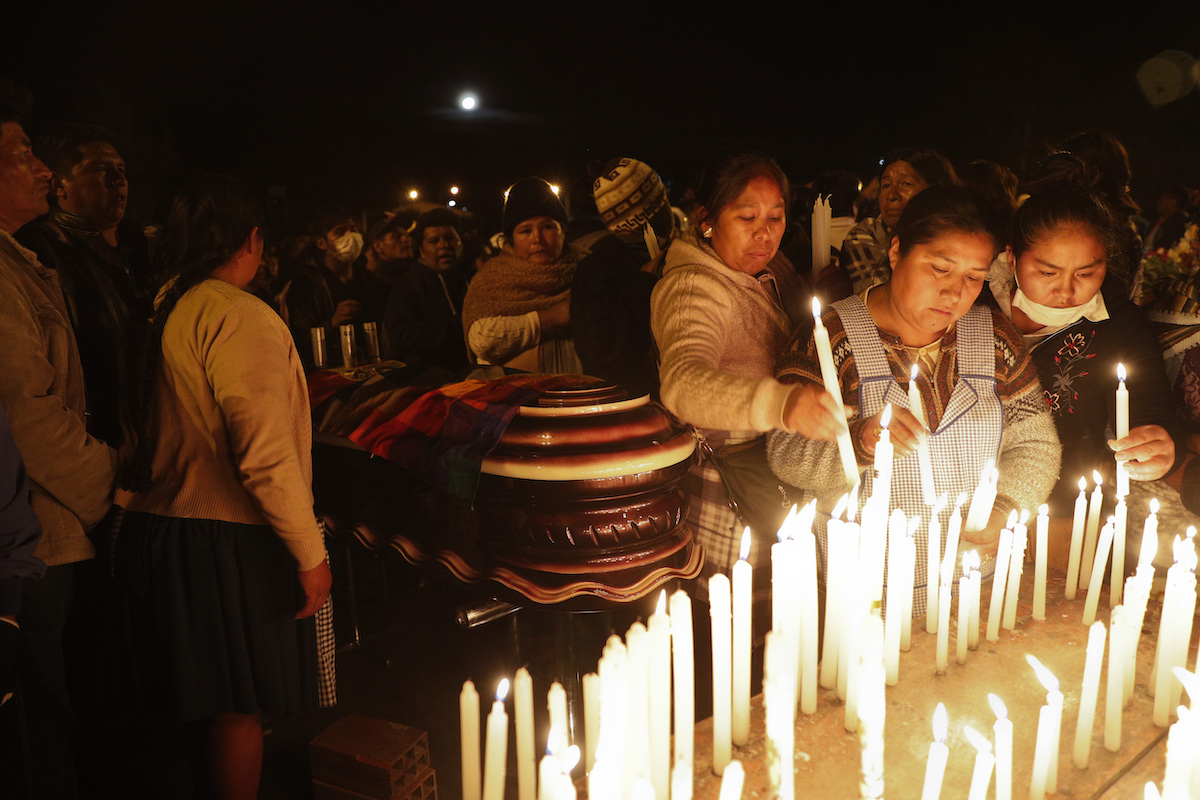 SACABA, Bolivia (AP) — Bolivia’s political crisis turned deadly again when security forces opened fire on supporters of Evo Morales. Officials said Saturday that at least eight people died and dozens were injured in an incident that threatens the interim government’s efforts to restore stability following the resignation of the former president in an election dispute.

Most of the dead and injured Friday in Sacaba, near the city of Cochabamba, had been shot, Guadalberto Lara, director of the town’s Mexico Hospital, told The Associated Press. He called it the worst violence he’s seen in his 30-year career.

The national Ombudsman’s Office said Sunday the death toll had risen to eight.

Angry demonstrators and relatives of the victims gathered at the site of the shootings, chanting: “Civil war, now!”

Morales, who was granted asylum in Mexico after his Nov. 10 resignation, said on Twitter that a “massacre” had occurred and he described the interim government led by Jeanine Áñez as a dictatorship.

“Now they are killing our brothers in Sacaba, Cochabamba,” he said in another tweet.

At least 13 other people had died during weeks of earlier protests against Morales before his departure, according to the Ombudsman’s Office. Several came in clashes between the president’s backers and those accusing him of fraudulently trying to win reelection.

“I am really concerned that the situation in Bolivia could spin out of control if the authorities do not handle it sensitively and in accordance with international norms,” she said in a statement.

“The country is split and people on both sides of the political divide are extremely angry. In a situation like this, repressive actions by the authorities will simply stoke that anger even further and are likely to jeopardize any possible avenue for dialogue,” she added. 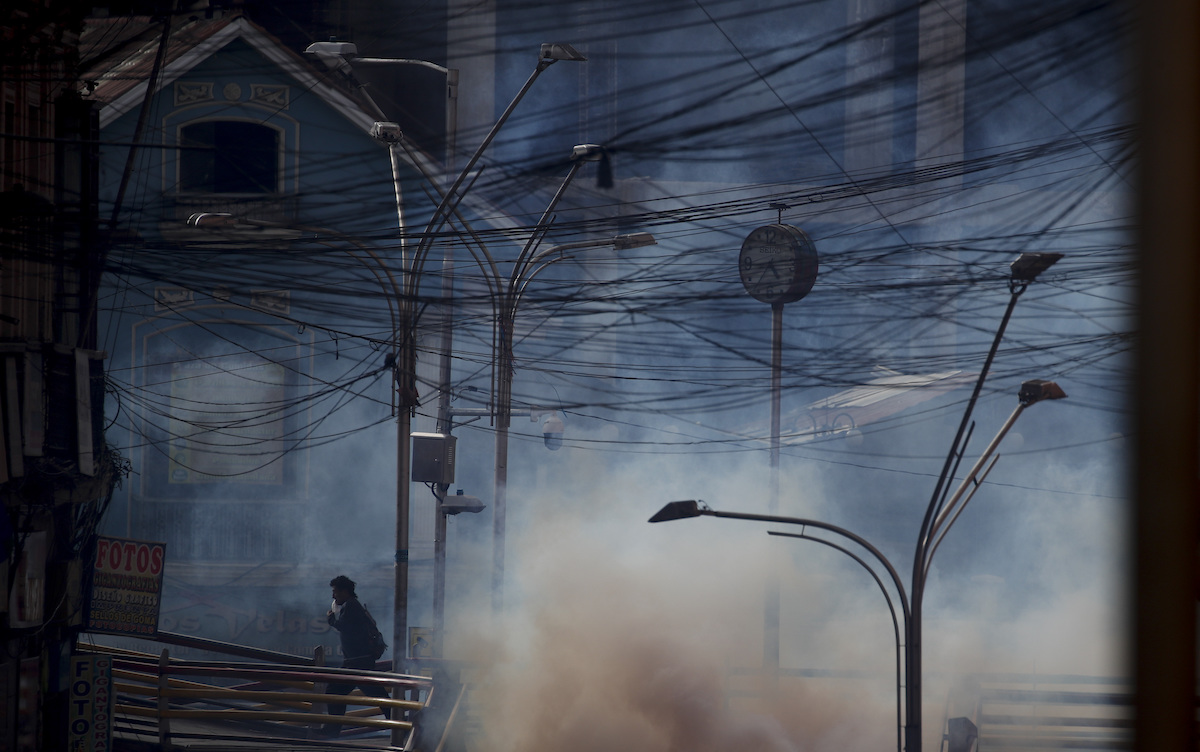 Presidency Minister Jerjes Justiniano told reporters in La Paz that five people had been killed and an estimated 22 were injured.

Lara, the hospital director, said that 75 people were injured.

Earlier in the day, Áñez said Morales would face possible legal charges for election fraud if he returns home from Mexico City.

Áñez also has said Morales would not be allowed to participate in new presidential elections, which are supposed to be held within three months. 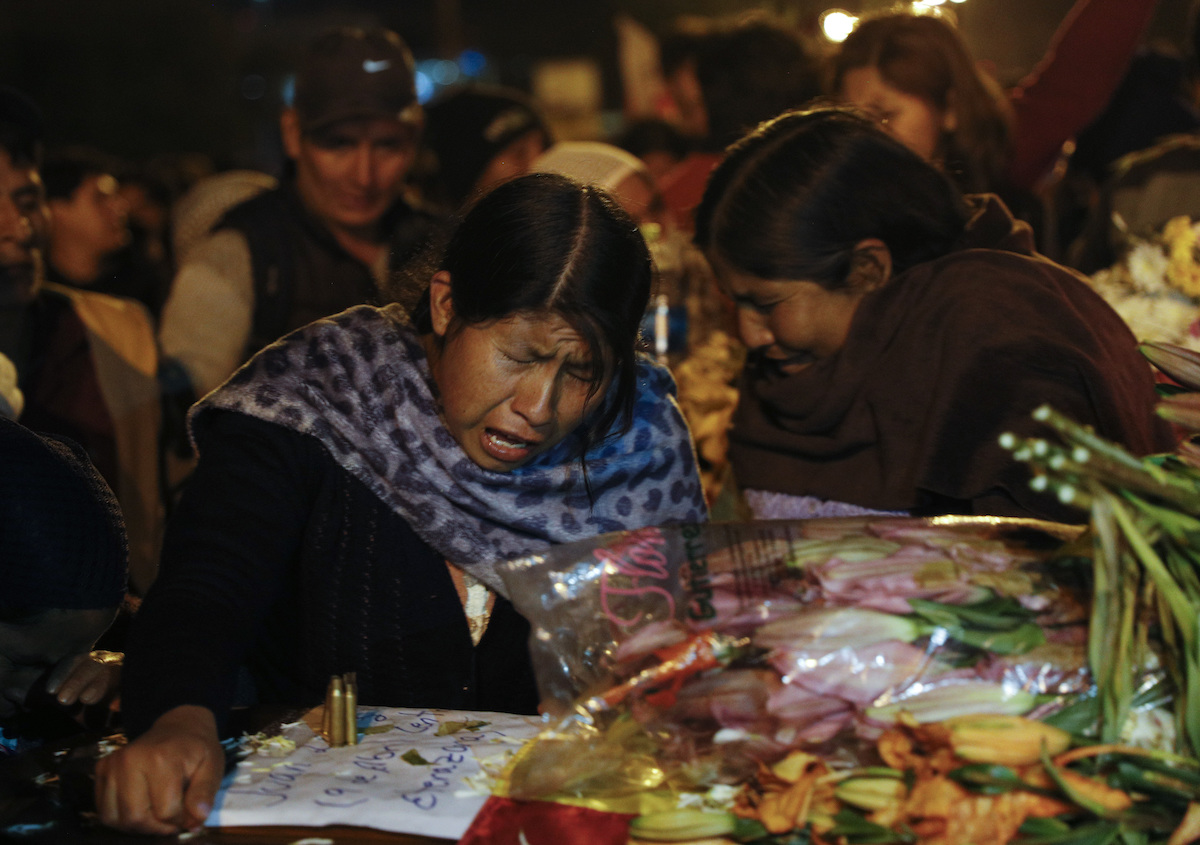 The ousted leader, meanwhile, contended this week he is still president since the country’s legislature has not yet approved his resignation.

Morales stepped down following nationwide protests over suspected vote-rigging in an Oct. 20 election in which he claimed to have won a fourth term in office. An Organization of American States audit of the vote found widespread irregularities. Morales has denied there was fraud.

Families of the victims held a candlelight vigil late Friday in Sacaba. A tearful woman put her hand on a wooden casket surrounded by flowers and asked: “Is this what you call democracy? Killing us like nothing?” Another woman cried and prayed in Quechua over the coffin of Omar Calle, which was draped both in the Bolivian national flag and the multicolor “Wiphala” flag that represents indigenous peoples.

Bolivia’s Ombudsman’s Office called on the interim government to investigate if the security forces had acted within the constitution and international protocols on human rights.

“We express our alarm and concern over the result of an attempt to stop a demonstration by coca leaf growers from entering the city of Cochabamba,” it said, adding that it had counted 13 earlier deaths since the protests began. 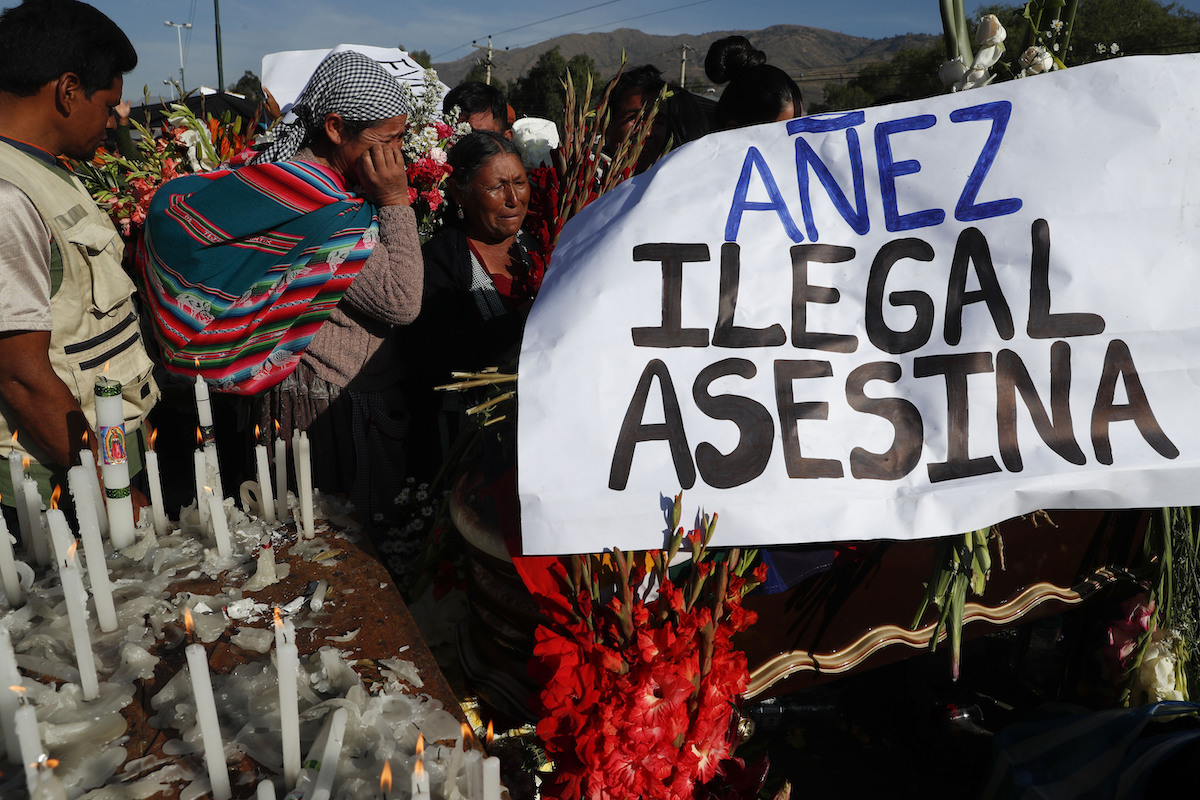 The Inter-American Commission on Human Rights condemned what it called “the disproportionate use of police and military force” in the clash.

“Firearms must be excluded from the operations used to control the social protests,” the commission said on Twitter with along with a video that showed the five people lying dead on a blanket on the floor. Soldiers and police in riot gear had been patrolling the area with armored vehicles in the previous days.

“We’re not going to let them make us flee, nor humiliate us. Let me say to Mrs. Añez that she must denounce this. If not the whole country is going to close in on her,” said Enrique Mamani, 21, a local resident. “They have carried out a state coup, paid off the military, paid off the police. There’s political persecution against our leaders.”

Backers of the interim government deny any coup, saying police and the military withdrew backing from Morales only to avoid shedding civilian blood during the massive protests against him.

Supporters of Morales, who had been Bolivia’s president for almost 14 years and was the last survivor from the “pink tide” of South American leftist leaders, have been staging disruptive protests since his ouster, setting up blockades that forced closure of schools and caused shortages of gasoline in the capital.

“There’s no gas,” said Efraín Mendoza, a taxi driver from El Alto, who was forced to buy gasoline on the black market at twice the regular price. 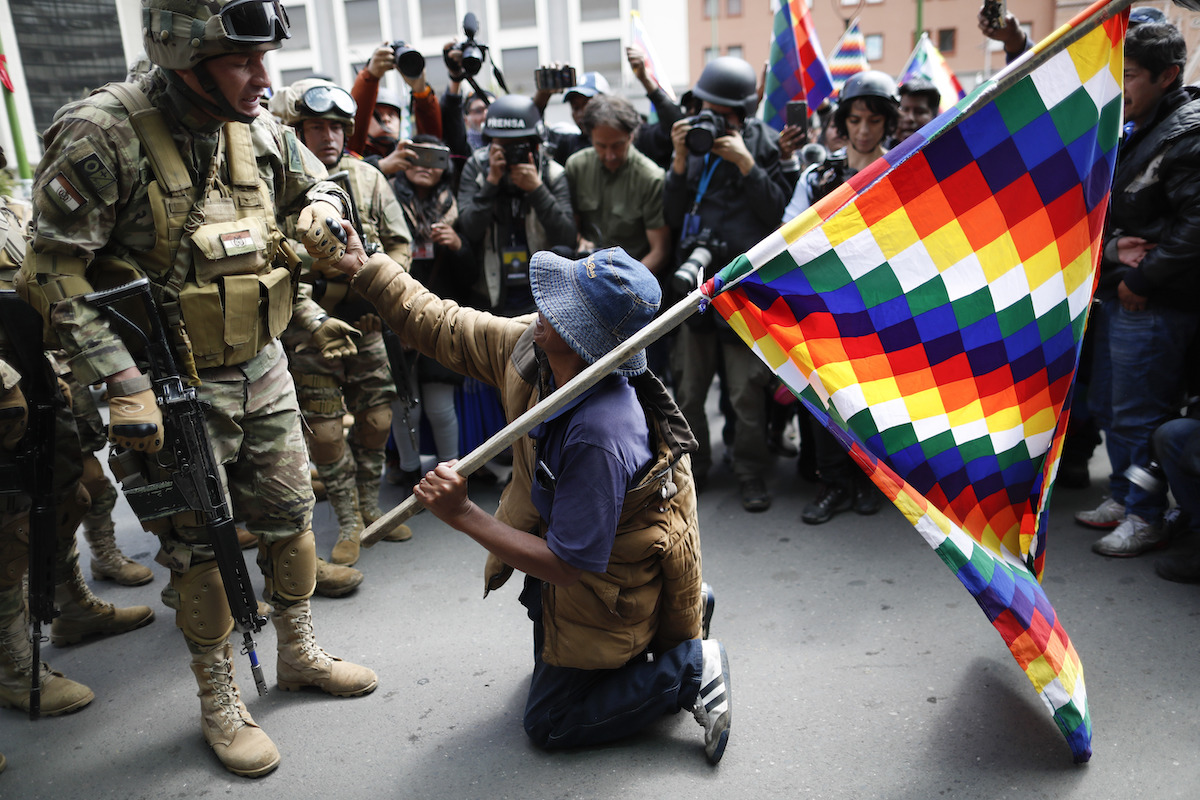 “Products are scarce. There’s no meat, no chicken, people are making long lines. It’s all because of the blockades,” he said. “There’s division in Bolivia. It’s exasperating.”

Áñez, who had been the highest-ranking opposition official in the Senate, proclaimed herself president when Morales resigned, saying every person in the line of succession ahead of her —all of them Morales backers— had resigned. 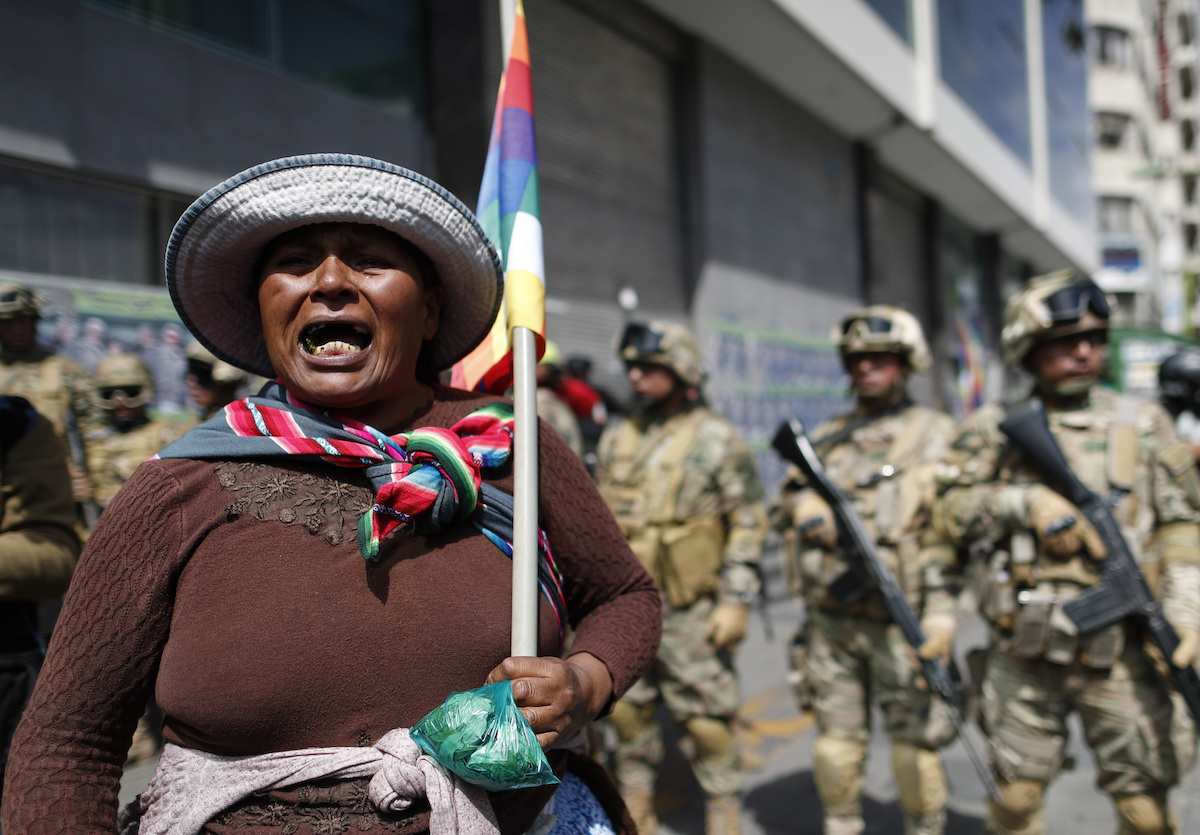 The Constitutional Court issued a statement backing her claim that she didn’t need to be confirmed by Congress, a body controlled by Morales’ Movement Toward Socialism party.

Much of the opposition to Morales sprang from his refusal to accept a referendum that would have forbidden him from seeking a new term.