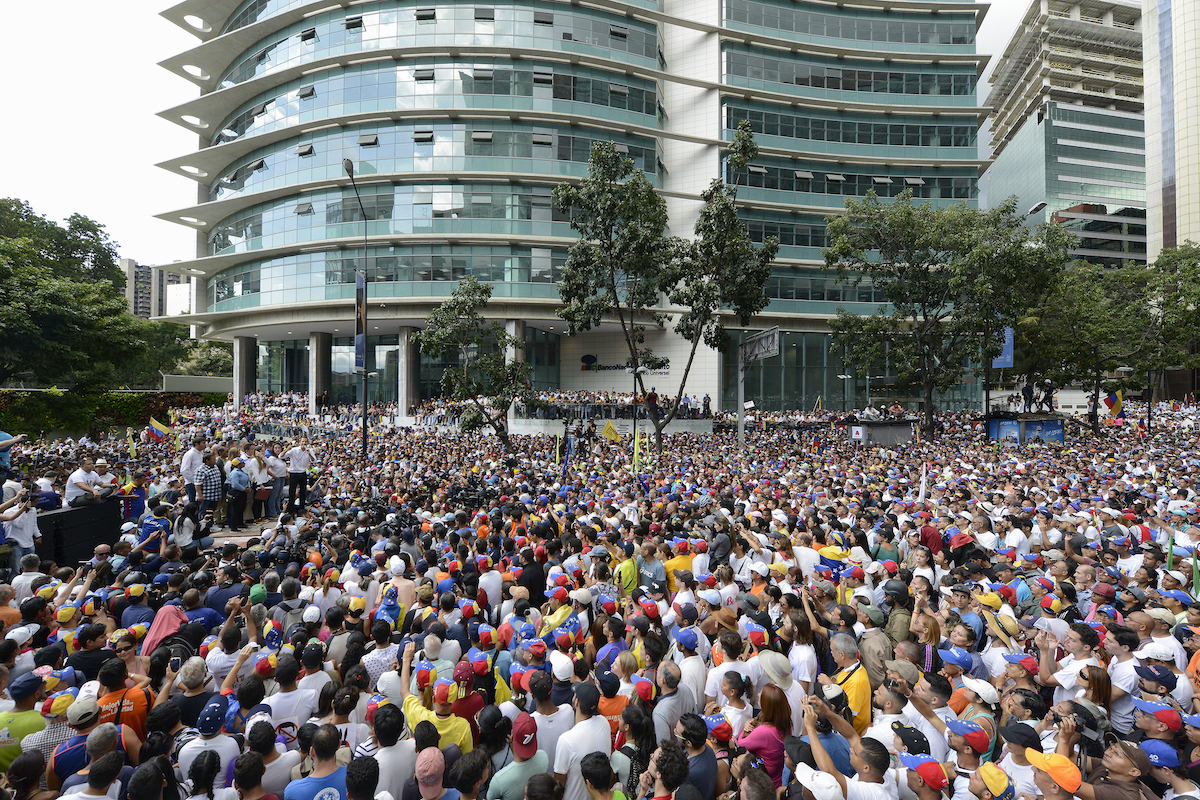 Guaidó in a speech called on supporters remain in the streets in the days ahead, pointing to the recent upheaval in Bolivia, where 18 days of protests prompted the resignation of Maduro’s ally, Evo Morales.

“If we stay at home, we will lose,” Guaidó said before marching peacefully with a small group of supporters to Bolivia’s embassy in eastern Caracas, an opposition stronghold.

“Today, tomorrow and Monday, we will be in the streets,” he added.

But it’s not clear he will be able to sustain momentum.

While crowds in Caracas were larger than they have been in months, they lacked the size and combativeness of demonstrations in January, when Guaidó declared himself president arguing that Maduro had “usurped” power and violated the constitution by starting a second term widely seen by opponents as illegitimate.

Retired office worker Deborah Angarita acknowledged that the crowd was not large, but she said she is determined to stay in the street despite the government’s efforts to wear down their resistance.

“We will stay in the streets until the regime leaves,” said Angarita, 60, who has been at all of the opposition marches this year.

Lisbeth Guerra said she closed her two electronics shops in Caracas to join the march because she is fed up with two decades of socialist rule that have ruined the economy and driven 20 of her relatives from the country.

“More than anything, I want other nations in the world to take note of our crisis,” she said, joining hundreds of Guaidó supporters at a plaza in the opposition stronghold of Altamira.

Guaidó, 36, leaped to the center of Venezuela’s political fray when the opposition-dominated National Assembly appointed him as its leader. On Jan. 23, arguing that Maduro’s reelection was illegitimate, he declared that he was assuming presidential powers pending new elections.

The United Nations Human Rights office urged Venezuelan authorities to allow peaceful protests without any acts of intimidation and violence. Few security forces were visible on Caracas’ streets early in the day.

Maduro’s socialist party also called its members to demonstrate in solidarity with Bolivia’s Morales, who resigned the presidency and fled into exile in Mexico on Nov. 10, claiming a coup d’etat following massive protests accusing him of engineering a fraudulent reelection.

Maduro backers wearing red shirts boarded buses with blaring salsa music for a rally scheduled to culminate at the presidential palace in the center of the capital.

The once-wealthy nation is gripped by crisis, which critics blame on years of failed socialist rule, while Maduro frequently blames right-wing forces backed by the United States set on overthrowing him to steal Venezuela’s vast oil reserves.

“The streets of Caracas are filled with joy with people defending their right to democracy,” Maduro tweeted. “Let’s tell the world Venezuela is strong, in peace and building a socialist homeland.”