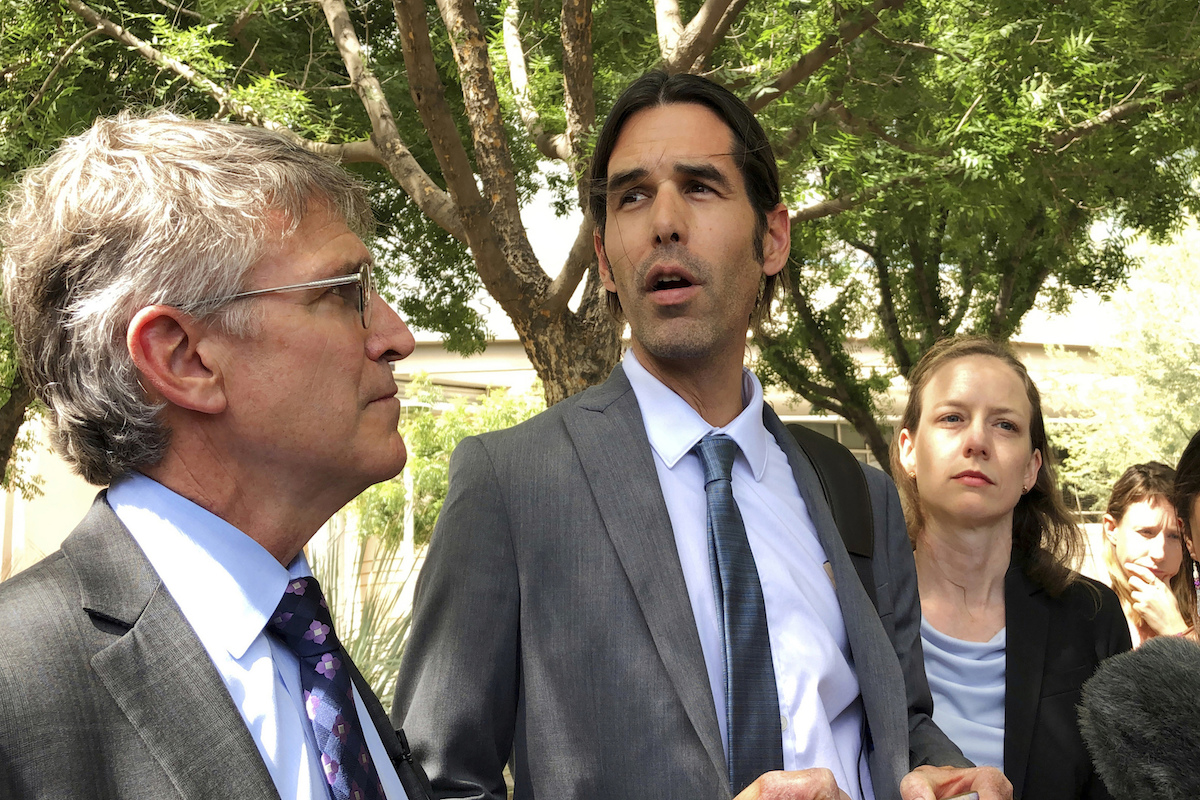 In this June 11, 2019, file photo, Scott Warren, center, speaks outside federal court, in Tucson, Ariz., after a mistrial was declared in the federal case against him. Warren testified Tuesday, Nov. 19, 2019, in the second criminal case against his actions as a member of a humanitarian aid group. (AP Photo/Astrid Galván, File)

TUCSON, Ariz. (AP) — A member of a humanitarian aid group whose criminal case has garnered international attention testified Tuesday that neutrality guides his work near the U.S.-Mexico border, denying that he has ever helped migrants hide or told them how to avoid authorities.

That’s what U.S. prosecutors say Scott Warren did when he was arrested in January 2018 by U.S. agents who were staking out a humanitarian aid station in Arizona known as “The Barn,” where two Central American men had been staying for several days.

Prosecutors say Warren harbored them and later gave them instructions on how to evade a U.S. Border Patrol checkpoint, an assertion that authorities made based on seeing him motion with his hands.

Warren, a member of the group No More Deaths, says that goes against the group’s training and protocols. He told jurors that he was orienting the men so they wouldn’t get lost in the desert.

It’s the second trial for Warren, 37, after a federal jury in Tucson deadlocked on charges last June, leading to a mistrial. It’s likely that attorneys will begin closing arguments Wednesday.

He said his legal training does not allow him to give directions or rides to migrants he encounters in the desert and that his interest is in saving lives.

“We need to work within the spirit of humanitarian aid and within the confines of the law,” Warren said.

Warren and his supporters say President Donald Trump’s administration has increasingly scrutinized humanitarian groups that leave water in the desert and conduct search and rescue operations when they are asked to help find a missing migrant.

But there was no mention of Trump after the federal judge overseeing the trial approved prosecutors’ request to ban Warren and his defense from mentioning the president.

Legal experts say the request itself is not particularly unique because prosecutors often want to keep the jury focused on the charges but that the judge’s approval shows how polarizing Trump and his immigration policies are.

On the stand, Warren recounted how he began humanitarian aid work shortly after moving to the small town of Ajo for postgraduate research. Warren has a doctorate in geography and teaches high school and college courses.

He walked jurors through his interactions with the migrant men, which began when he found them at The Barn on a Sunday and ended with their arrest on a Wednesday.

Warren said he was surprised to find the men when he arrived to prepare dinner for a group of volunteers who were searching the desert and were expected back soon.

Months earlier, Border Patrol agents had launched an investigation into The Barn, a camp used by several aid groups, according to documents released after news outlets sued to obtain them.

The documents show that in April 2017, an anonymous Ajo resident told Border Patrol officials that he suspected members of the group were harboring immigrants there.

About three months later, officials detained members of the group No More Deaths on suspicion of vandalizing a camera at Cabeza Prieta National Wildlife Refuge, where they regularly left water jugs.

In November 2017, agents interviewed residents who said they had noticed more traffic and littering outside The Barn.

Agents eventually encountered a man who said he had traveled across the desert with two other men who were picked up by a van.

Suspecting they might be at the No More Deaths building, agents began watching it on Jan. 17, 2018, arresting Warren and the two Central American migrants. The men were deported after providing video testimony.

Thousands of immigrants have died crossing the border since the mid-1990s, when increased enforcement pushed many to Arizona’s scorching desert.