In Dominican Republic, Thousands Join ‘March of the Butterflies’ Protest Against Gender Violence 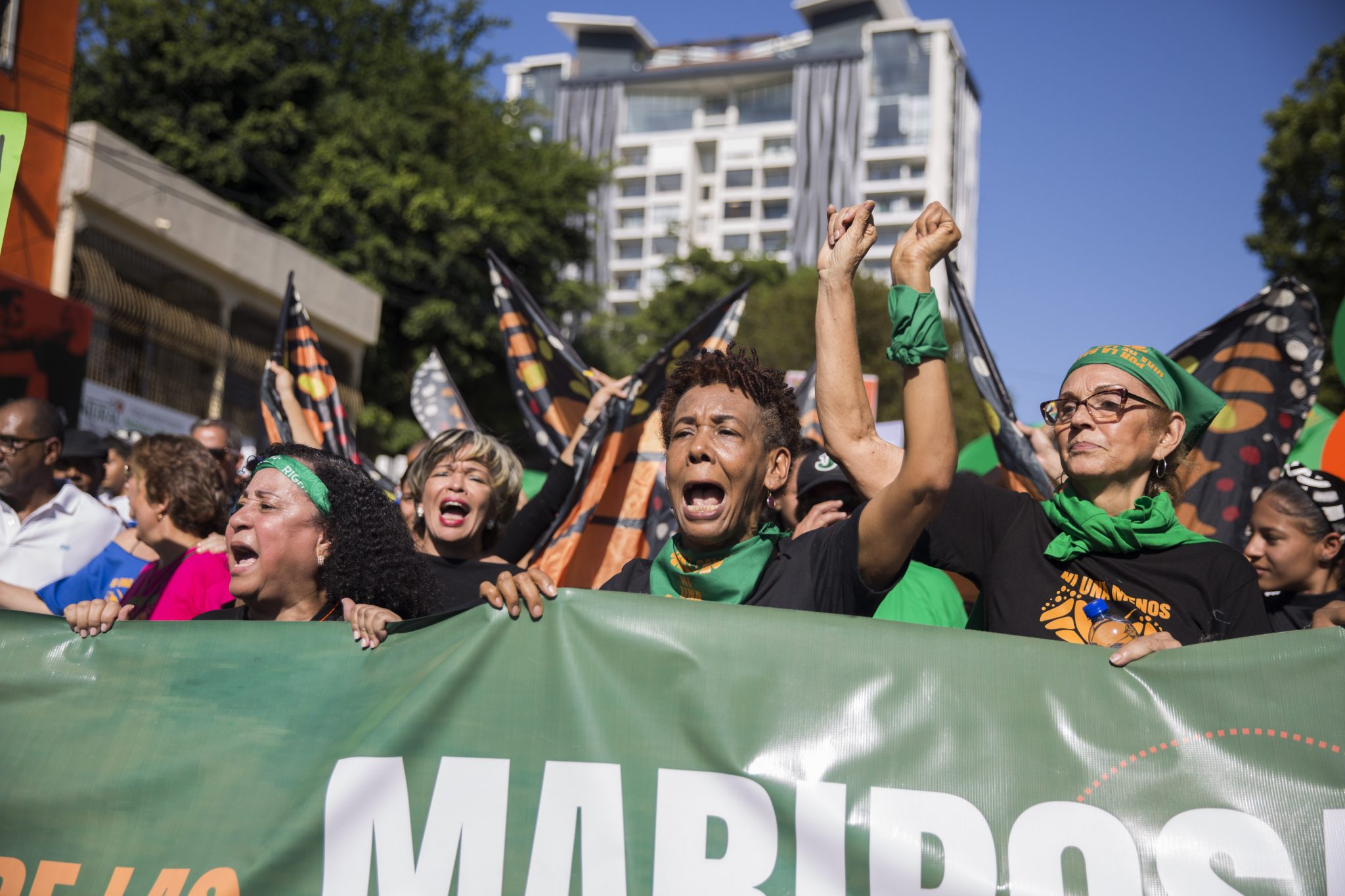 People take part in a protest against gender violence and femicide in Santo Domingo on November 24, 2019. (Photo by Erika Santelices/afp/AFP via Getty Images)

Thousands of women and their allies took to the streets of Santo Domingo on Sunday to protest the alarming rate of femicides in the country—among the highest in Latin America.

At least 357 women were murdered by a partner or ex-partner over the last four years, according to a recent report from the Dominican Political Observatory (OPD).

“This past month, it’s been at least eight women in 16 days. Unfortunately, the government also doesn’t count femicide in the way that the rest of the world does,” Gina Goico, a New York-based Dominican activist, told Latino USA. She helped to organize a Times Square protest outside the Dominican consulate in solidarity with the much larger protest in Santo Domingo.

When the Dominican Attorney General’s office tallies the murder rates of women, Goico noted, it counts only those committed by intimate partner violence as “femicide,” a discrepancy that makes the official numbers differ greatly from those shared by non-governmental organizations. According to a November 22 Acento article, the Attorney General’s office announced a decrease of 25 percent in femicide rates, but data from other external organizations, like the UN’s Economic Commission for Latin America and the Caribbean (CEPAL), reported much higher numbers.

One of the most recent individual cases was that of Emely Twomey Acosta, a 16-year-old shot by a man presumed to be her boyfriend.

The march in the Dominican Republic was organized under the name “Marcha de las Mariposas” (March of the Butterflies) to mark the assassination of the Mirabal sisters on November 25, 1960, after they stood against dictator Rafael L. Trujillo. Twenty years ago, the United Nations recognized the date as the International Day For the Elimination of Violence Against Women.

In Santo Domingo, the march kicked off in the sector of Mirador Sur with a rally that included performances by artists like Xiomara Fortuna and Adalgisa Pantaleón, theatrical presentations and speeches from journalists and activists.

Activists also displayed an installation of shoes to represent the hundreds of women who have been murdered. They also sang chants like “Ni una más” (“Not one more”) and “Vivas nos queremos” (“We want us alive”).

“I hate to say the following, but it makes sense that we have that amount of femicides in the Dominican Republic when you see that we have a culture that objectifies women, where violence is ubernormalized in romantic relationships, and you see in the nuclear family, machismo is uphelp,” Goico said. “It makes sense, and of course we’re going to have crazy murder rates and femicides in a country where being a woman is a second-class citizen, and if you’re a Black woman, if you’re a trans woman, odds are against you.”

In New York City, about a dozen young Dominicans gathered during the cold and rainy day for chants, and to share their concerns. New York City is home to almost 2 million Dominicans and Dominican-Americans.

“I’m here for the women who aren’t able to be here today, for the thousands who have passed away in the past, we can’t stand for this anymore. And it’s not just there [in Dominican Republic]. The culture is here too,” Katherine Cepeda, 27, told Latino USA during the demonstration. “It’s disheartening but at the same time I’m not surprised by the numbers, I feel like it’s something I’ve always heard growing up, even the stories in the beauty salons, ‘oh, did you hear so and so killed his wife.'” 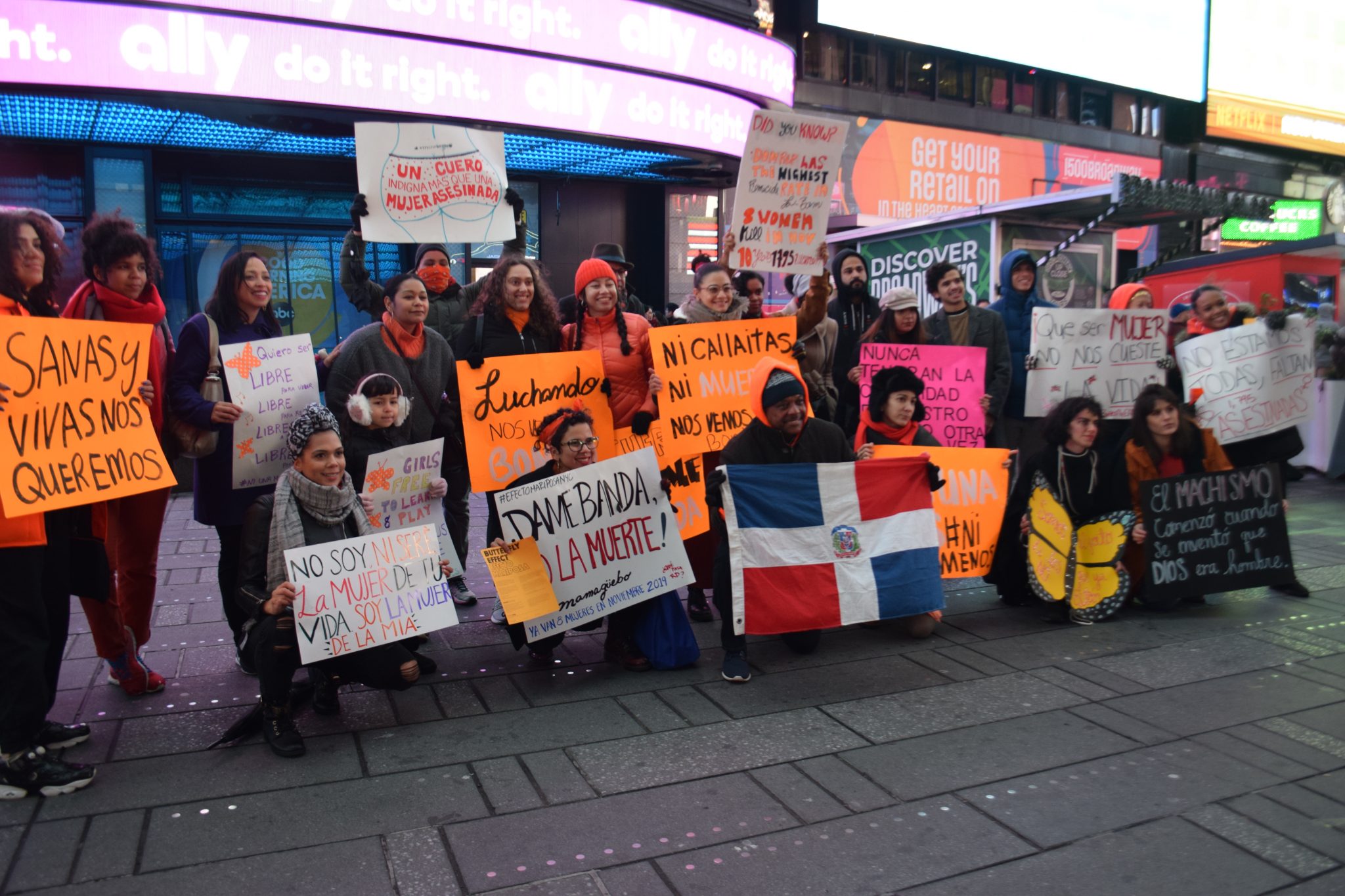 Activists and concerned Dominicans joined a demonstration in New York City in solidarity with the “Marcha de las Mariposas” on November 24, 2019. (Photo by Amanda Alcántara/Latino USA)

One of the chants sung during the Santo Domingo protest pointed to a regional issue, saying “Alerta, alerta, alerta que camina la lucha de las mujeres por América Latina” (“Attention, attention, attention the walk of the struggle by women in Latin America”). In 2018, a report by CEPAL stated that 3,287 women had been killed across Latin America and the Caribbean, the countries with the top five rates were El Salvador, Honduras, Bolivia, Guatemala and the Dominican Republic.

Ahead of the planned protests, the president of the Supreme Court denounced the treatment of women who have been victims of violence in the Dominican Republic in the courts, announcing a new set of policies for victims, including sensitivity training for court employees. Still, for many activists in the streets, these measures aren’t enough.

“It’s a lot deeper than just the law changes, but it’s colonialism. It’s the patriarchy. It has to start at home, like we have to unlearn, relearn, and just decolonize our ways and our thoughts starting with the people in our families,” Cepeda said.

One response to “In Dominican Republic, Thousands Join ‘March of the Butterflies’ Protest Against Gender Violence”