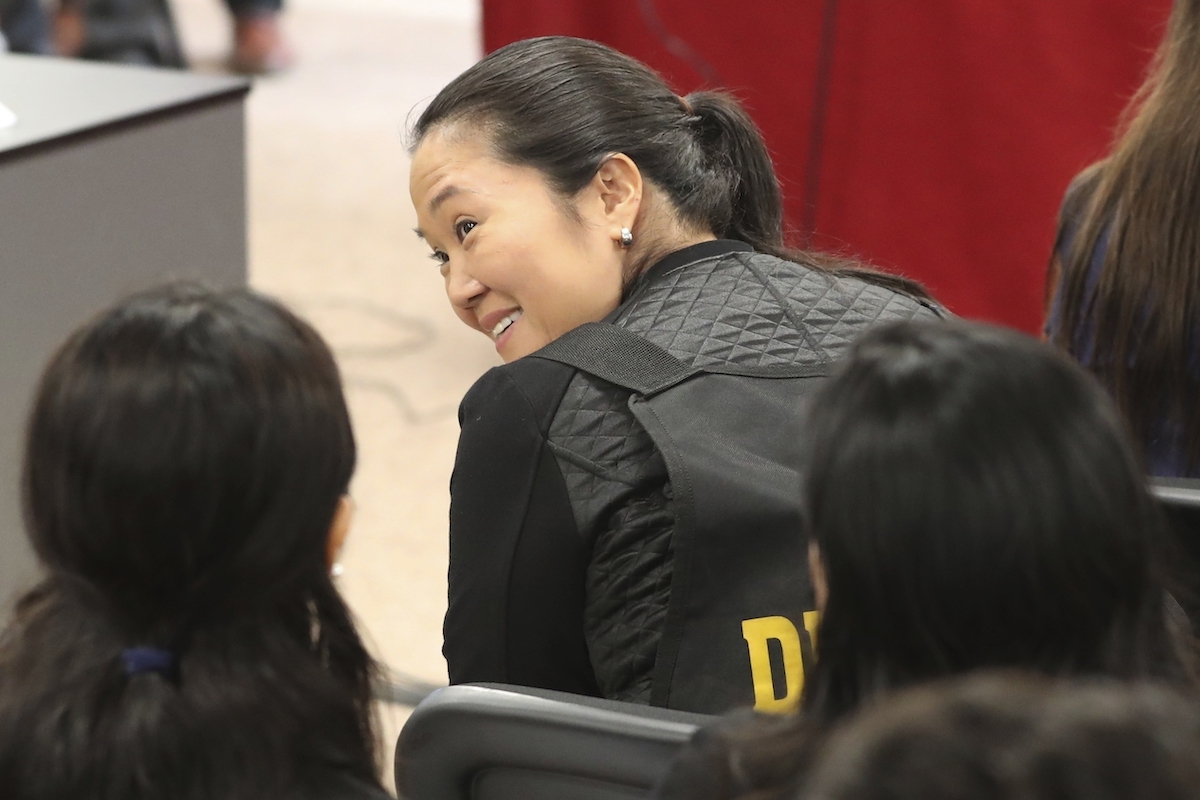 In this Oct. 17, 2018 file photo, Keiko Fujimori, the daughter of Peru’s former President Alberto Fujimori, and leader of the opposition party, attends a hearing to appeal her detention in Lima, Peru. Keiko Fujiori kept silent Monday, Nov. 25, 2019, claiming violation of due process after being questioned on her connections with the Brazilian construction company Odebrecht, involved in multiple cases of corruption in Latin America. (AP Photo/Martin Mejia, File)

Magistrates noted that the 4-3 ruling does not constitute a judgment of Fujimori’s guilt or innocence regarding accusations she accepted money from Odebrecht, the Brazilian construction giant.

“The Constitutional Tribunal isn’t ruling on the fundamental issue,” tribunal president Ernesto Blume said. “It’s not declaring her absolution nor her guilt.”

Habeas corpus places the burden of proof on those detaining a person to justify the detention in court.

The former first daughter was jailed a little over a year ago, capping a remarkable downfall for a politician who twice nearly won the presidency. Prosecutors are investigating accusations Fujimori laundered money from Odebrecht to finance her 2011 and 2016 campaigns—allegations she denies.

The ruling was met with both applause from loyal supporters who have painted “Free Keiko” signs around Lima and anger from detractors who want to see her held accountable for the alleged crimes. 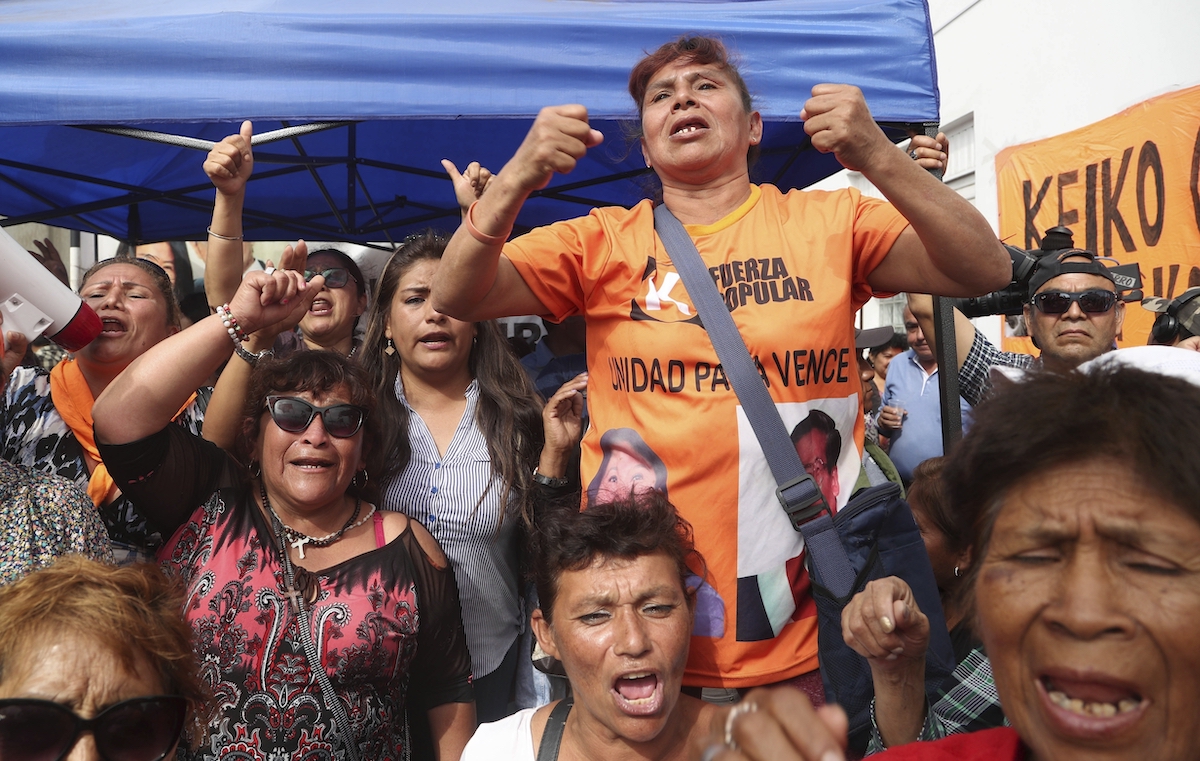 After nightfall, hundreds of mostly young people protesting the ruling tried to march on the court’s headquarters, but were blocked by police.

Fujimori’s husband, Mark Villanella, who had been on a more than week-long hunger strike outside the jail where Fujimori is being held, said he would remain there until his wife was officially freed. The magistrates indicated that could happen later this week.

Peru is in the midst of a reckoning over entrenched, widespread corruption that has decimated public confidence in elected officials. Nearly every former living president is under investigation in connection with the Odebrecht probe—with the exception of Fujimori’s father, who is serving a 25-year prison sentence for human rights abuses, corruption and the sanctioning of death squads.

Prosecutors in Peru have gone further than any other nation outside Brazil in holding political leaders accountable but have also come under scrutiny for their frequent use of preliminary detention against those who have not yet been charged.

Former President Alan García died in April after shooting himself in the head as officers came to detain him in relation to the Odebrecht probe.

Anti-corruption advocates and prosecutors say preliminary detention is needed in the case of powerful leaders with access to great resources that could help them flee or obstruct justice. Critics say prosecutors aren’t always justified in putting them behind bars.

Fujimori is not the first high-profile leader to have her detention annulled. Ex-President Ollanta Humala and his wife were also held for months without any formal charges until Peru’s constitutional court ruled they should be freed. 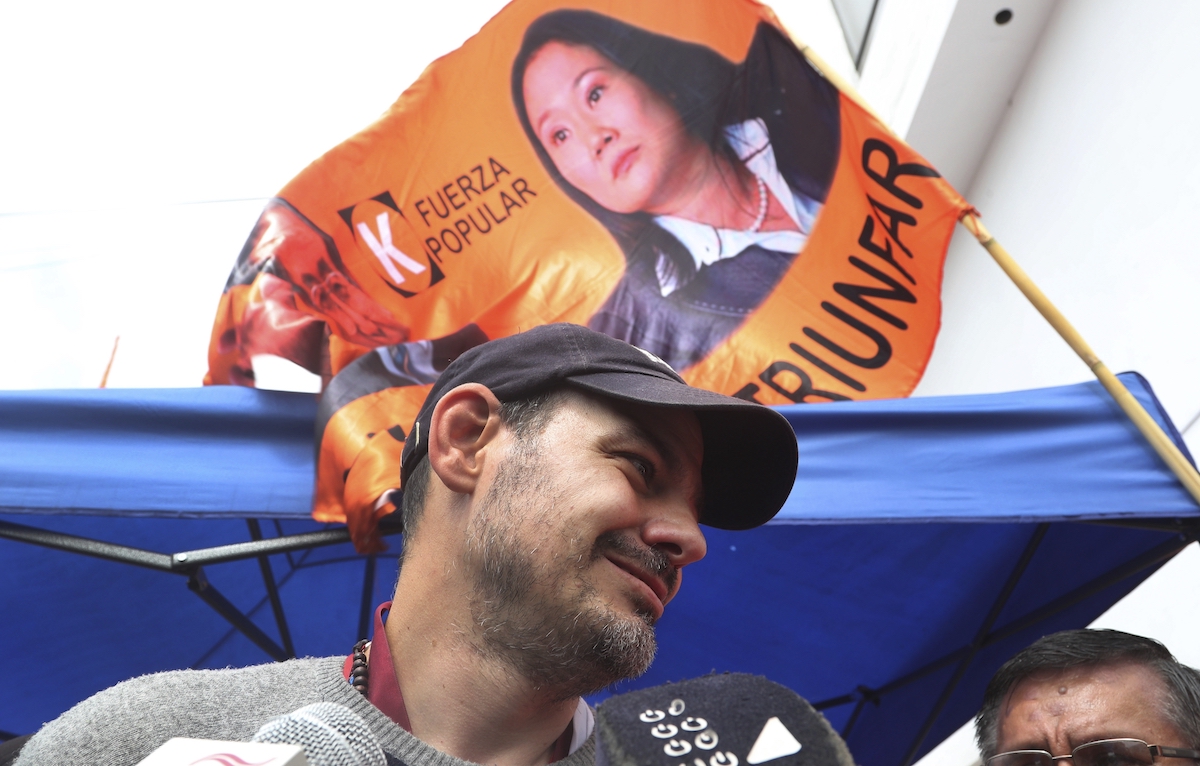 The husband of jailed opposition leader Keiko Fujimori, Mark Vito Villanella, who is on a hunger strike since 12 days ago, talks to the press outside of the women’s prison in Lima, Peru, Monday, Nov. 25, 2019. (AP Photo/Martín Mejía)

Among those clamoring for Fujimori’s release was her daughter, Kyara, who this week turns 11, and wrote a letter to the magistrates.

“We have been waiting more than a year for my mom to return home,” she said. “I don’t know how much longer I will have to wait, but the truth is, I need her.”

Fujimori is the daughter of Alberto Fujimori, the Peruvian strongman governed from 1990 to 2000 and remains a polarizing figure. Some Peruvians praise him for defeating Maoist Shining Path guerrillas while others detest him for human rights violations.

Keiko Fujimori tried to follow in her father’s presidential footsteps and forge a gentler, kinder image of the movement known as “Fujimorismo.”

She finished second in the 2011 election and five years later, lost in a razor-thin vote, coming within less than half a percentage point of defeating economist Pedro Pablo Kuczynski.

Nonetheless, she remained influential as the leader of the Popular Force party, which held a majority in congress until President Martín Vizcarra dissolved the legislature in September in a move he described as necessary to uproot corruption.