Editor’s Note: This story, originally published on November 29, has been updated several times. All updates are at the end of the original story.

“Puerto Rican junior tennis player was expelled from the Celsius Tennis Academy facilities for speaking Spanish,” Couto de Jesús tweeted. “He was Sarasota, Florida, participating in the Casely International Championship. In the video, a white man kicks him out of the facilities and shows his economic privilege. This must be denounced.”s

It is unclear what the context of the video is and who recorded it, but Couto de Jesús did say in a another tweet that he got the video from the player’s uncle, Javier Irizarry, and that Irizarry aid that his nephew was invited to play at the Casely International Championship.

At one point of the video, one of the boys said that the older man told them to go cut the grass, which the older man did not deny (“so what.”) The boys alleged that the older man was being racist for what he told them. The video also showed them trying to resolve the situation before they appear to leave the premises. In a conversation with Latino Rebels, Irizarry said that both of the boys were speaking in Spanish before the video was recorded, but that his nephew usually speaks English when traveling. His nephew told him that the older man heard the two speaking in Spanish and told the boys to shut up and cut the grass. It was after that when the recording of the video happened.

According to Irizarry, his nephew is back in Puerto Rico.

Latino Rebels reached out to the Cary Cohenour, owner and director of Celsius Academy about the video, and Cohenour said that the incident did not involve anyone from Celsius, and that the older man was a member of the Bath & Racquet Fitness Club. Celsius leases tennis courts from that private club.

“I was told about the unfortunate incident by Carlos Casely, who is running the tournament and his staff. That the boys where being loud and a member of the Bath & Racquet Club [older gentleman] who had two kids taking a lesson made that comment. It was not a member of Celsius team. We simply lease the courts from the Bath & Racquet Club to run our academy,” Cohenour said via a text to Latino Rebels. “We have quite a few Spanish-speaking students in our academy and we would never allow or represent such a comment. We have been in the business of serving international tennis players for over 18 years and are just as saddened by the incident as you.”

Latino Rebels also reached out to the Bath & Racquet Fitness Club for comment. The receptionist said the club’s manager was not available at the time, and LR left a voicemail with him asking about the video. As of this publication, the manager has not responded to our message.

UPDATE, November 29, 2019, 6:15 p.m. ET: Michael Brandon, Bath & Racquet Fitness Club manager, left a voicemail with Latino Rebels and said that the member was notified that he was permanently removed from being a member of the club.

“I am super disturbed at seeing that video. I was actually the coach that was on the court. I knew that there was some type of incident but had no idea to what degree this actually went down. After watching the video, the member is going to be removed this afternoon so I’m going to be notifying him that he’s no longer a member of the club. Bath and Racquet definitely or any of the staff here does not stand for racism whatsoever or any type of actions like that at all, especially towards children or obviously anyone. He will be removed from the club this afternoon, and thank you for reaching out. We’re so sorry that happened but we have rectified the situation.

After getting Brandon’s voicemail, Latino Rebels called the club back and spoke with Brandon, who confirmed that man was indeed notified that he was no longer part of the club. Brandon also said that he was the one giving tennis lessons to the man’s son and his son’s friend, and did not understand the gravity of the incident going on at the same time until he saw the video. Brandon did say the incident took place earlier this week before Thanksgiving. When asked if the man accepted the permanent ban, Brandon said he did, and the club considers the matter closed.

Latino Rebels also asked Brandon if the member who was banned was local conservative Sarasota politician Martin Hyde, who is running in the the Sarasota city commission race. Brandon said that it was club policy to not share the identity of members, both current or former ones.

On Friday night, David Begnaud of CBS News reported that he spoke with Hyde.

I spoke to Hyde by phone tonight. He says his son & a friend of his son were having a tennis lesson with an instructor. Hyde claims there was a group of young people, near the court where the lesson was being held, who were talking loudly.

That's Hyde's side of the story. @latinorebels got the other side of the story from the uncle of one of the young men who insists that Hyde (who's from the U.K. & speaks with a British accent) berated them for speaking Spanish & told them to cut grasss. https://t.co/JqhLb9ygnc

According to what Begnaud tweeted, Hyde claimed that he had not heard about being banned from the club.

On early Saturday morning, Hyde responded to multiple requests by Latino Rebels for comment. The first email said the following: “Please do not keep trying to contact me.”

A follow-up email said this:

“I have had dozens of direct threats of violence towards me and my family as a direct consequence of the false narrative your publication added to the video. It is time to stop before somebody actually gets hurt.”

The young tennis player who is Irizarry’s nephew posted a public Twitter thread about what he said had happened. He even claimed that Hyde offered him money to not share the video, a claim Hyde has denied.

Hyde spoke with Sarasota’s local paper, saying that he is not a racist. He also said there is no evidence in the video to prove he said anything racist, and that his “so what” comment about cutting grass referred to something else. He did not deny that he was banned from the club.

It is also being reported that Hyde has now withdrawn from the Sarasota city commission race. This is what Begnaud said Hyde told him on Saturday:

“Florida business Martin Hyde, who is running for city commission in Sarasota, told me he is withdrawing from the race after being accused of a racist rant against Puerto Rican tennis players. He denies saying anything racist, despite group of boys saying he did.

“One of the young men accused Hyde of offering 50,000 dollars to keep the video private. I asked Hyde if he made that offer. His response was: ‘Seriously? That should tell you something about their truthfulness. Simple question would be when exactly am I supposed to have offered this payola? Why would I offer $50k for a video I didn’t even know existed until yesterday? I’ve had to send my 11 year old son to stay elsewhere today such is the threat level which is not helped when people add crazy lies like this. On this level anyone can say anything apparently. Thank you. I understand I was wrong to be as aggressive as I was but it was my kids that I thought I was protecting. I’ve quit my campaign already because I’m a realist and know that enough people will believe it that the only way to protect those I care about is to walk away. I’m no saint but this has now reached a level where they’re embellishing what did happen with a whole level that simply did not. As if I’ve even got $50k kicking around to keep people quiet! I’m not Donald Trump, I’m a small town business man. This has gotten way out of hand. I’m having to leave my home now for a few days as I don’t know if someone might act on this particularly when they’re adding the ludicrous assertions of $50k bribes. Ask who heard that and to whom it was offered and when ? I trust you to deflate that falsehood at least.'”

UPDATE, November 30, 2019, 7:15 p.m. ET: A copy of Hyde’s statement about withdrawing from the race is now making the rounds on social media. Couto de Jesús has tweeted it out:

I made a mistake and I want to rectify it. I'm wondering if I can do that better in than out."

UPDATE, December 2, 9:15 a.m. ET: Hyde responded to Peter Vivaldi, who had invited Hyde to appear on his Monday morning radio show. Hyde did not agree to go on Vivaldi’s show, but did share another statement with him. 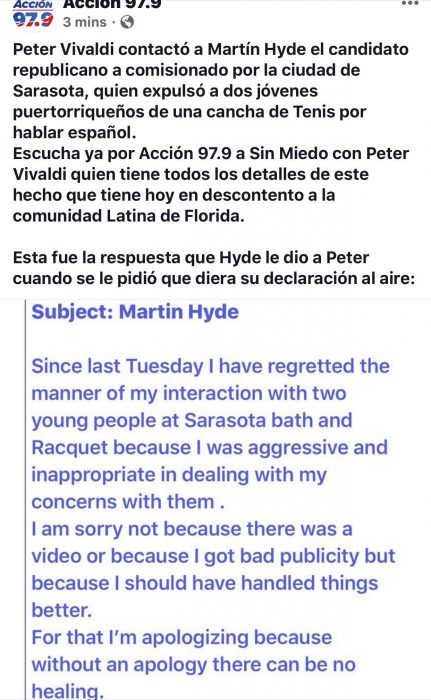