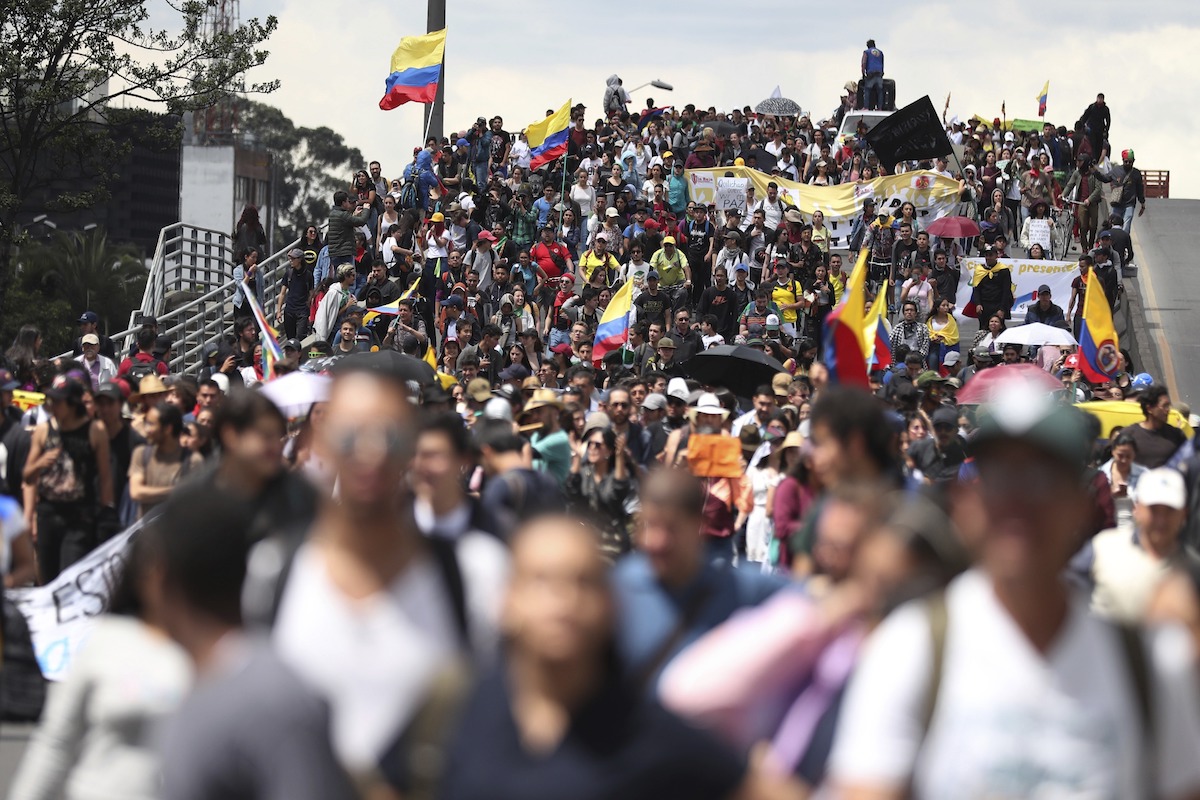 BOGOTÁ, Colombia (AP) — Protesters marched in Colombian cities Wednesday in a third strike against President Iván Duque as attempts to start dialogue drag on and the patience of ordinary citizens begins to wear thin.

The turnout was considerably smaller than an initial mass strike November 21 that drew an estimated 250,000 to the streets, but the demonstrations were still large enough to cause traffic headaches for many around Bogotá.

“It’s fair that they protest, but we’re the ones who suffer,” said Diego Monroy, who works at a parking lot that generally has 40 vehicles but had only two Wednesday. “If the protests continue, I’m going to be left out of work and that is not right.”

Duque and members of the National Strike Committee, which is comprised of labor unions and student activists, are due to sit down again Thursday as they try to settle on conditions to begin a dialogue.

Protest organizers want direct talks with Duque over 13 demands, but the government is only willing to meet them halfway. On Monday, Duque’s administration offered to hold separate talks with protesters specifically on their demands but have since reiterated that it would still be under the umbrella of the president’s “National Conversation” with various groups. 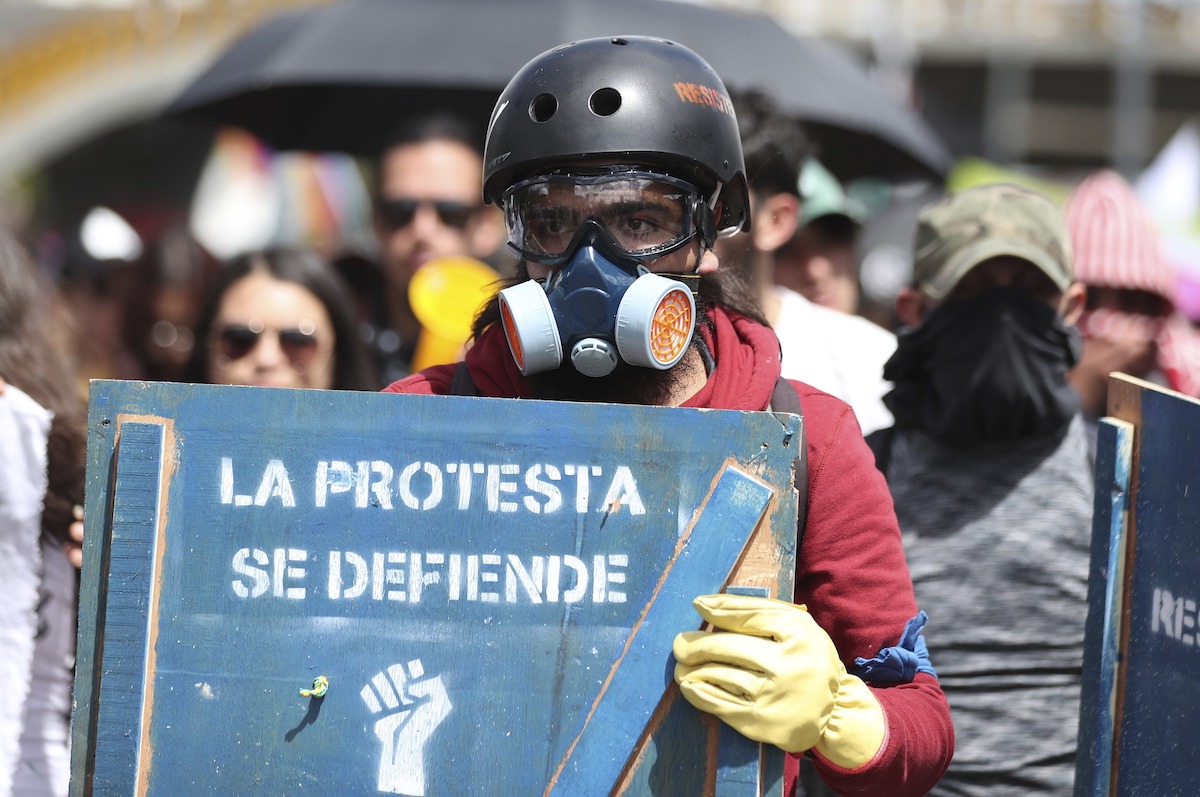 “The government is entirely willing to keep talking and find solutions for the problems of Colombia,” said Diego Molano, who is coordinating the national dialogue that Duque is embarking upon.

Protesters are upset with a government they contend hasn’t done enough to address long-standing issues like corruption and inequality. The protesters are also complaining about proposed tax and labor reforms as well as continuing violence in the aftermath of the country’s 2016 peace accord with leftist rebels.

The latest demonstrations were joined by indigenous guards who have come under attack in parts of Colombia by remnant illegal armed groups trying to take charge of areas once controlled by the leftist rebels. The guards, who do not carry firearms, formed a protective barrier in front of protesters as a way of deterring any heavy-handed response from police. 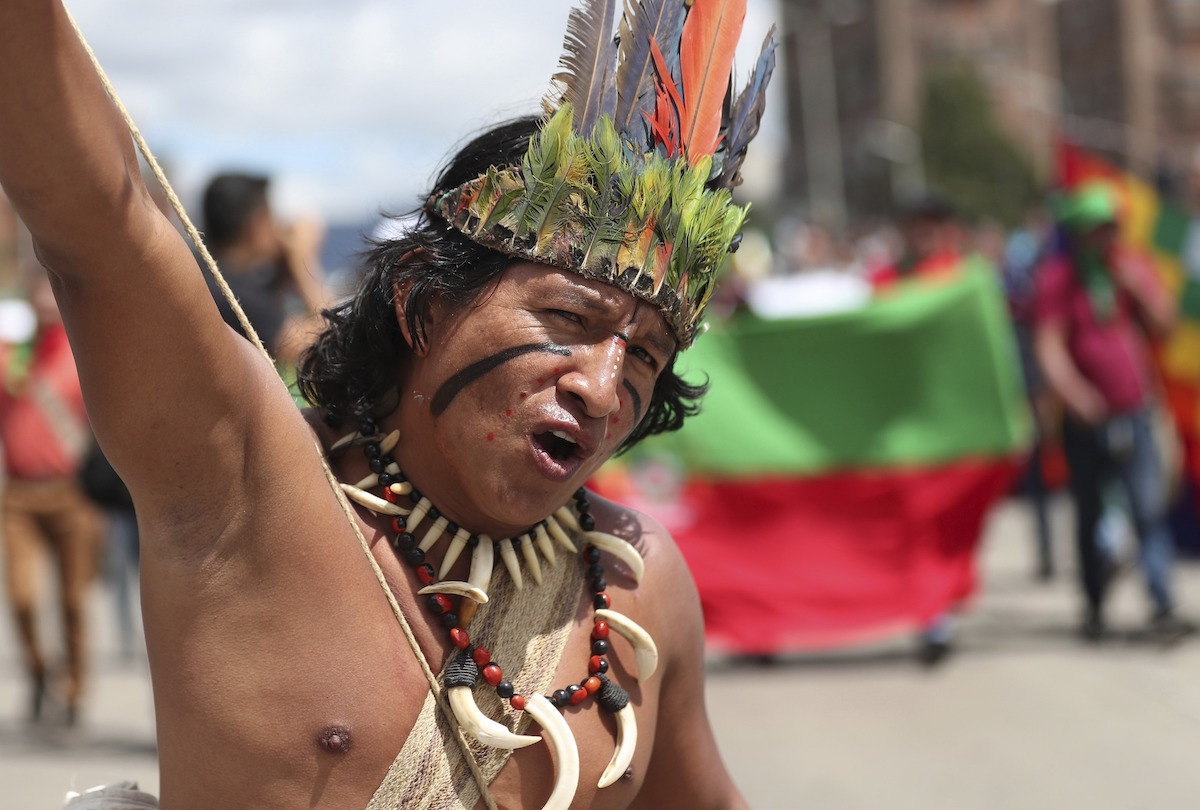 An 18-year-old high school student died after being struck by a projectile fired by riot police during a protest in late November.

“Today the Colombian indigenous movement is mobilized in Bogotá in the defense of life,” said Luis Fernando Arias, an indigenous leader.

The National Strike Committee’s 13-point list of demands include asking Duque to withdraw from a proposed tax reform, eliminate the police unit accused in the death of the student protester, review free-trade agreements and fully implement the historic peace accord with rebels.

“With these marches we’ve woken up the people,” said Matleny Hernández, a teacher protesting Wednesday.

Though protesters have not yet officially begun discussing their demands with Duque’s government, there are indications the demonstrations have caught the ear of lawmakers.

Legislators made changes to the most controversial aspects of a proposed labor reform introduced by Duque’s party and added new components to a tax bill that would benefit for poor Colombians—though both legislative proposals remain criticized by government proponents who contend they still overwhelmingly favor the wealthy. 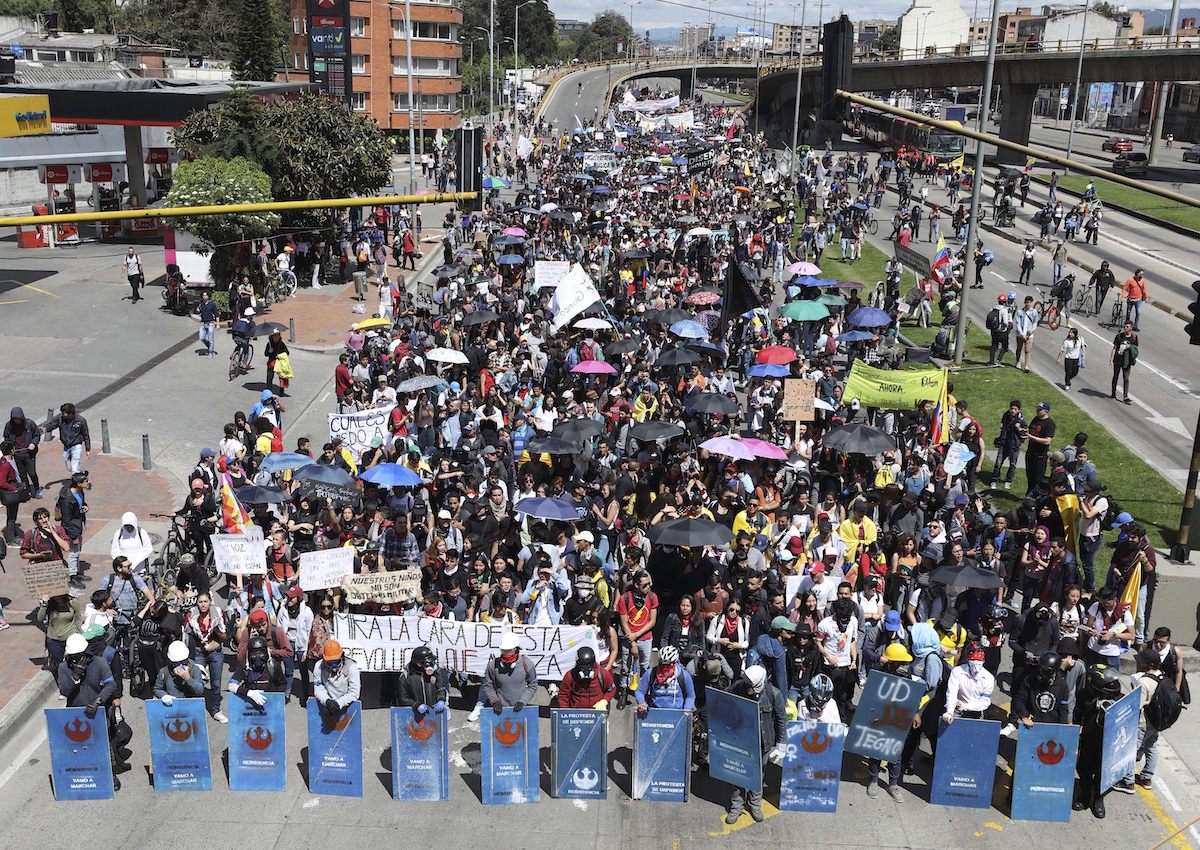 Colombia’s protests are part of a larger wave of unrest taking place in many countries around Latin America where citizens have risen up against presidents across ideological spectrums. Demonstrator complaints vary across nations but one common denominator is a frustration with leaders accused of protecting those in power at the expense of the most vulnerable.

The protest in Colombia on Wednesday was in some ways a test of how much support the National Strike Committee maintains on the streets as it tries to work out conditions for a dialogue with Duque.

Gimena Sánchez-Garzoli, a human rights advocate with the Washington Office on Latin America, said that even with diminished numbers the protesters remain an influential faction because of the wide range of actors —from students to Afro-Colombian leaders— taking to the streets.

“A cross pollination of supporting each other’s issues makes it hard for Duque to ignore,” she said.

As protesters blocked roads and many Colombian workers found it difficult to get to and from their jobs, some expressed frustrations with both sides for not reaching an agreement to halt the demonstrations.

“They should sit down, negotiate, be flexible and reach an agreement,” said Myriam García, who works near Plaza Bolívar, where many of the protests have congregated. “It’s hurting us all.”