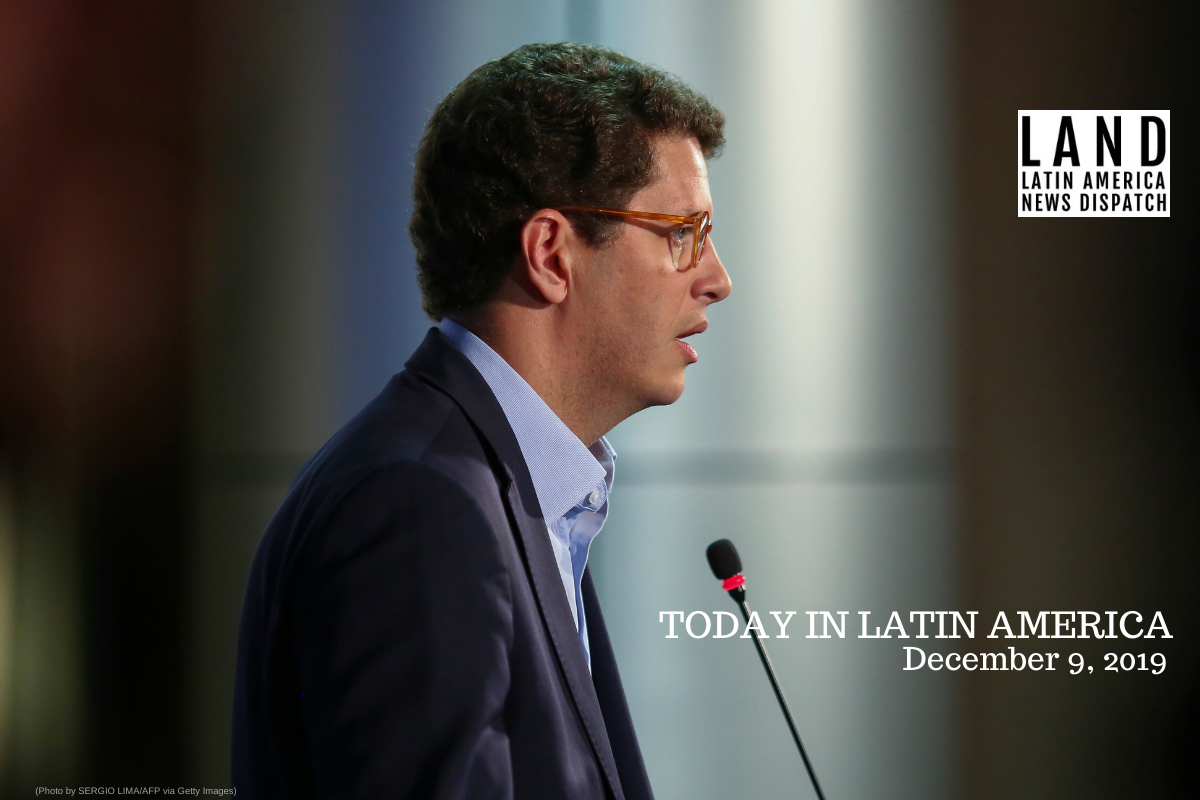 Brazil’s Environment Minister Ricardo Salles speaks during a press conference at the Defence Ministry in Brasilia on August 24, 2019. (Photo by Sergio Lima/AFP via Getty Images)

BRAZIL: Brazilian environment minister Ricardo Salles said Brazil cannot stop deforestation without the help of wealthy countries at the United Nations climate conference (COP25) on Saturday. “We are willing to do whatever is necessary to do so, but we need that back up,” he told the Associated Press. “That back up was promised many years ago and we’re still expecting the rich countries to participate in a proper way.” Salles did not set any goals for limiting deforestation during Saturday’s meeting, but argued that “developed nations” had an obligation to assist Brazil because of Article 6 of the Paris Accords.

Germany and Norway already donated more than $1.2 billion to Brazil’s deforestation efforts, but have gradually suspended contributions after questioning President Jair Bolsonaro’s commitment to environmental protection. Salles said the Bolsonaro administration is focused on developing biological resources that can also provide incomes for Indigenous communities in the Amazon. Deforestation in Brazil has reached its highest annual rate in 11 years. Salles’ comments come after a year of extreme wildfires and illegal logging in the Amazon and amid international concern that Bolsonaro will not prioritize environmental protections.

BRAZIL: Two Indigenous leaders and members of the Guajajara forest guardian group were shot dead in Maranhão state on Saturday. Gunmen fired from a moving car along a federal highway near El-Betel village, targeting a group of forest guardians and killing Firmino and Raimundo Guajajara. The attack follows last month’s shooting of a member of the Guajajara forest guardians, a group that protect Indigenous land from illegal deforestation. Brazilian police are investigating the shooting and Justice Minister Sergio Moro announced he may send a National Guard team to the region.

BOLIVIA: Former President Evo Morales’ Movement Toward Socialism party announced that it will continue seeking consensus candidates for new presidential elections. After the party failed to select a candidate at a meeting in Cochabamba on Saturday, the party said that Morales will serve as campaign chief as it consults with Indigenous groups to choose the candidate. Meanwhile, Morales traveled to Cuba on Friday for a “temporary” visit. Morales received treatment for ear, nose and throat complaints in Cuba in 2017, and an aide said that his visit was for a medical appointment. However, observers have speculated that Morales’ visit to Cuba may be the beginning of a political comeback.

DOMINICA: Amid weeks of unrest and an appeal to postpone elections, Dominica’s ruling Labour Party won a majority in Parliament on Friday. Party members won 18 out of 21 seats, beginning its fifth term in power, while the opposition lost three of its six seats. Security forces from off the island were brought in to monitor voting stations and prevent protesters from blocking public spaces. Voters and opposition members have since accused the Labour Party of buying votes with free plane tickets to supporters.

PANAMA: The eighth CHINA-LAC Business Summit begins today in Panama, with the goal of increased trade with China and investment in the region as a whole. More than 2,000 visitors are expected to participate in the discussions, sponsored by the Chinese Council for the Promotion of International Trade, the International Chamber of Commerce of China and the Inter-American Development Bank. Panama’s Chamber of Commerce, Industries and Agriculture is hosting the event, which will end on Wednesday.

COSTA RICA: The United Nations asked the Costa Rican government to expedite refugee requests in response to a surge of Nicaraguan migrants on Thursday. More than 55,000 Nicaraguans have applied for refugee status in the country. Michelle Bachelet, the United Nations High Commissioner for Human Rights, called on the international community to support Costa Rica’s efforts to accommodate the high numbers. In a subsequent statement, the UN also expressed concern for “the increase in hate speech in the country and recommended the approval of a framework legislation that combats all types of discrimination.”

MEXICO: Five people died on Saturday afternoon, a block away from the National Palace and the Zócalo in downtown Mexico City. A retired army captain opened fire in the entrance to an apartment building, killing two people immediately. Another victim was later found, and a fourth died on the way to the hospital. A police officer arrived on the scene and lethally shot the assailant when he would not surrender his gun. Residents of the area have reported an increase in crime in the area, even though it is steps away from the National Palace and a popular shopping and entertainment district. Just hours later, thousands arrived at the Zócalo for the Radical Mestizo music festival.

MEXICO: Octavio Romero, the director of Petroleos Mexicanos (Pemex), announced that Mexico made its biggest oil discovery since the 1980s at the Quesqui field in the Gulf coast state of Tabasco. Romero said that the reserves are estimated at 500 million barrels. On Saturday, President Andrés Manuel López Obrador visited the Quesqui field. He said the discovery shows that his energy plan is working. López Obrador has focused on reinvigorating the state-owned oil company Pemex, unlike his predecessor, Enrique Peña Nieto, who facilitated increased private investment in Mexico’s oil industry.

UNITED STATES: Trump tweeted on Friday that he is putting on hold his plan to label Mexican drug cartels as terrorist organizations. He wrote that the United States “will temporarily hold off this designation and step up our joint efforts to deal decisively with these vicious and ever-growing organizations!”

All necessary work has been completed to declare Mexican Cartels terrorist organizations. Statutorily we are ready to do so. However, at the request of a man who I like and respect, and has worked so well with us, President Andres Manuel @LopezObrador_ we….

Trump said he was ceding to a request from Mexican President Andrés Manuel López Obrador. He had announced the measure after nine American citizens were killed in a remote area of northern Mexico. Experts were skeptical that designating cartels as terrorist organizations would help combat them.