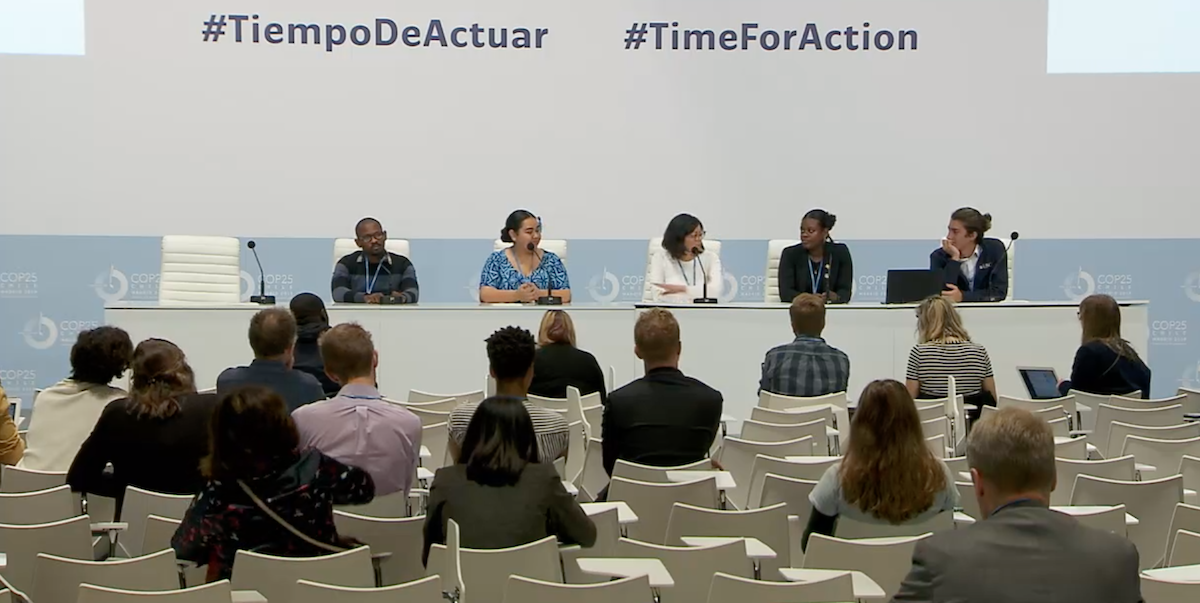 MADRID — Jimmy Fénelon, the national coordinator of the Caribbean Youth Environmental Network in Haiti, believes he has felt the effects of climate change firsthand.

“I am living it,” he said on Friday during a small press conference hosted by the Alliance of Small Island States (AOSIS) on the sidelines of the United National Climate Change Conference in Madrid. “I am facing rising [sea levels]. I am facing deadly hurricanes. I had typhoid. I had malaria. And my grandmother died from cholera. So I know what I’m talking about.”

Mr. Fénelon was one of four young adults from island states who took the stage at a Friday event to call for decisive action in Madrid, where delegates from nearly 200 nations are negotiating the details of the much-anticipated launch of national climate pledges at next year’s conference under the 2015 Paris Agreement.

The young people —who spoke on the same day that climate activists like Greta Thunberg led thousands of people through the streets of Madrid— may be disappointed: The 44-member island alliance that hosted a Friday panel released a blistering statement on Sunday night as the UN conference geared up for its second and final week.

“COP25 risks undermining its headline claim of ambition,” the statement said, using the acronym for this year’s 25th anniversary event. “A few very influential parties have stymied efforts in week one to respond to the climate emergency through procedural blockages, quibbles over text and threats of breaking consensus simply to preserve regressive positions.”

AOSIS also described the Madrid protests as evidence of widespread support for its cause.

“Despite the rapidly narrowing window of opportunity to take decisive action and an array of outstanding priorities, the unwillingness of some parties, who are also undeniably culpable for the current climate crisis, threatens the very foundation of the Convention and the Paris Agreement,” the organization stated. 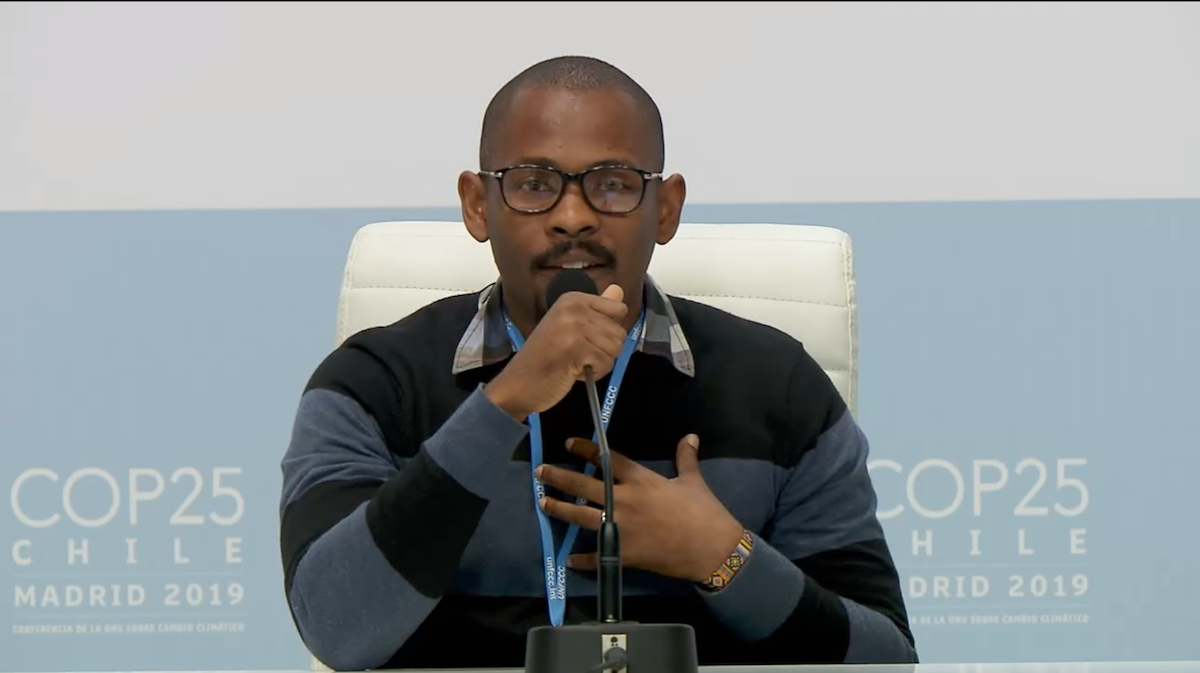 About half of the Caribbean islands — including Puerto Rico, which was named the country that suffered the most from extreme events from 1999 to 2018 in the 2020 Global Climate Risk Index— do not even have the right to raise their voices as an official country delegation at COP25 because they are still 21st Century colonies or territories of developed nations.

Ramón Cruz, an expert in climate change and international relations and vice president of the Sierra Club, told the Centro de Periodismo Investigativo that to his knowledge, he is one of only three Puerto Ricans at this critical summit and that they all represent private entities based in the US and Europe. He added that there is no official representation from the government of Puerto Rico and that he believes the US government will not stand up for the island either, given President Donald Trump’s stance on climate change.

“The damage Trump has done to world climate change efforts is really great. I thought it would be less and that other countries would continue moving forward at a fast pace, but instead many have slowed down their initiatives. We are not seeing the same level of commitment as we saw three years ago,” he said.

Mr. Cruz added that Puerto Rico’s and other territories’ lack of representation at COP25 may prove crucial because one of the important points being negotiated is the loss-and-damage clause of the Paris Agreement that will determine how developed countries will compensate smaller nations, and the territories might be left out of the deal.

“For years, a variety of stakeholders have used conferences like the UNFCCC COP to promote their own views,” he said.

AOSIS negotiator Carlos Fuller, a liaison officer for the Caribbean Community Climate Change Center, said Monday that the island alliance’s frustrations stem partly from the positions of? developed countries including the United States, the European Union, Australia, Canada and Japan.

“They do not see the need to establish a mechanism to address loss and damage, a financial mechanism that we require,” Mr. Fuller said, referring to calls for wealthier countries to pledge more funding to help poorer ones adapt to climate change.

Meanwhile, larger developing countries including China, Brazil and India are not as ambitious in their targets for reducing carbon emissions as AOSIS would like.

“They are now becoming the major emitters, and we stayed in it to address that also,” Mr. Fuller said. “So we are fighting multiple fights.”

The Sunday statement was part of AOSIS’ efforts to ramp up support for its cause as ministers from participating countries arrived at the conference early this week for the start of the high-level segment on Tuesday.

But there was widespread frustration as negotiators wound up their talks at 2:30 a.m. Tuesday without consensus in many areas, leaving ministers with difficult decisions on their plate.

Many ministers spoke on Tuesday, when representatives of island nations repeated urgent pleas for climate action.

Others also ramped up pressure, with Ms. Thunberg giving a press conference with a group of other young climate activists and United States presidential hopeful Michael Bloomberg making an appearance along with U.S. actor Harrison Ford.

Island nations have long complained that they are disproportionately affected by climate change even though they contribute relatively little to the carbon emissions that cause it. But in recent years, their pleas have taken on added urgency in the Caribbean as islands including the Bahamas, Puerto Rico and the Virgin Islands have been devastated by major hurricanes that scientists say are likely a prelude of more to come.

“The word was out there for many years that we could expect more hurricanes, and now we are actually seeing it,” said Bahamas COP25 delegate Jeffery Simmons, the senior deputy director of the country’s Department of Meteorology.

His delegation is attending under the shadow of tragedy: Hurricane Dorian devastated the country’s Abaco Islands in early September, leaving at least 70 people dead and hundreds more missing.

“They still finding bodies,” Mr. Simmons said, adding that the number of missing people is unknown.

In the face of such disasters, the islands have called on larger countries to do more to keep the promises in the Paris Agreement, which include limiting global warming to 1.5 degrees Celsius above pre-industrial levels and providing more money to help developing countries adapt.

They have also endeavored to lead by example: At a pre-COP25 summit initiated by UN Secretary General António Guterres in September in New York City, some island nations committed to achieving carbon neutrality by 2050 and to switching to 100 percent renewable energy by 2030.

“There is a lot of action occurring certainly within the small island developing states, but without a doubt our action alone will not deliver the type of ambitious results that we need to see to achieve a 1.5-degree world,” said Ms. Felson, who is also the deputy permanent representative of Belize to the UN. “We absolutely need the other major countries who have contributed significantly to what we have now… to raise their ambition to do more to curb that trajectory to bring us towards a 1.5-degree world.”

Such concerns were echoed on Tuesday by island-state ministers and UN officials. Omar Figueroa, the minister of state in the Ministry of Agriculture, Fisheries, Forestry, the Environment, Sustainable Development and Immigration in Belize, spoke on behalf of the AOSIS.

“A planetary crisis is upon us and none can find solace in political exceptionalism from what nature has in store for us,” he said. “The demise of earth’s life support systems will be indiscriminate.” 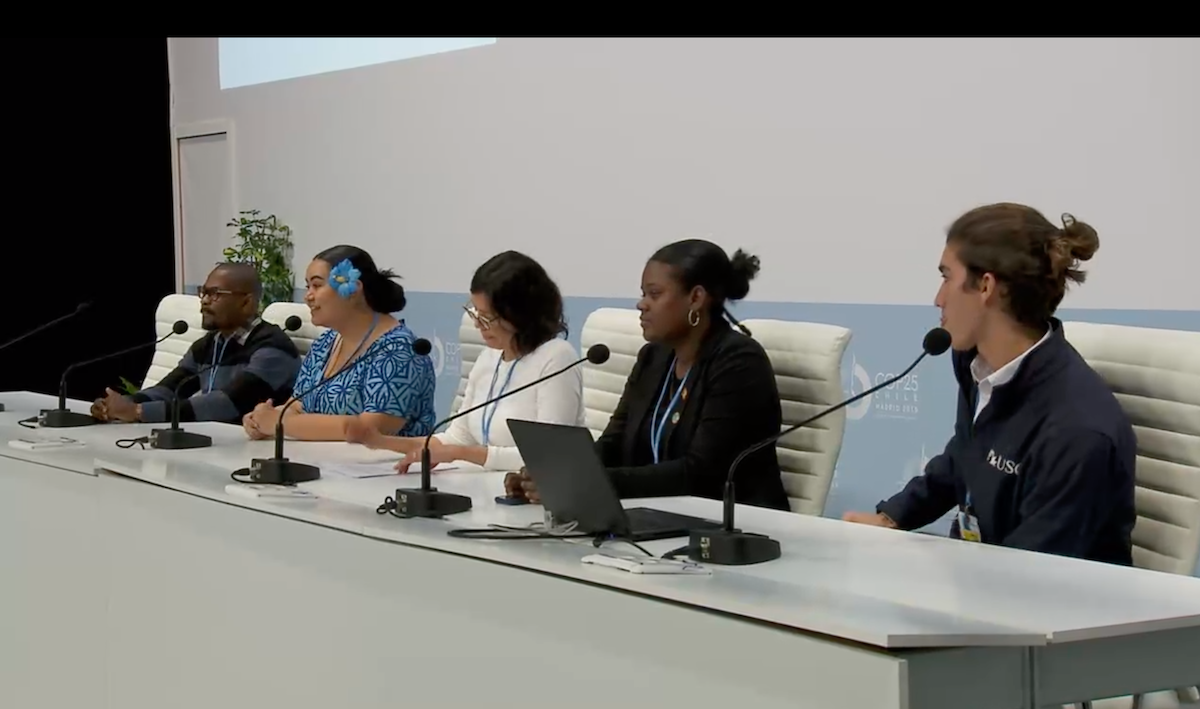 He also mentioned the effects that the “hellish” Hurricanes Dorian, María and Irma have had on Caribbean countries like the Bahamas, Antigua and Barbuda and Dominica as an example of the consequences of climate change.

AOSIS, 16 of whose 44 members are in the Caribbean, was formed in 1990 to help small island states collectively advocate for their cause. Since then, it has played a leading role in bringing climate change to the world’s attention.

“We were the ones who pushed really hard for the 1.5-degree inclusion in the Paris Agreement,” said Crispin d’Auvergne, a St. Lucian who serves as the program coordinator for climate change and disaster risk management for the Organization of Eastern Caribbean States. “I think for many years [small island developing states] have been considered the moral voice of the convention, because we tend to speak on existential issues.”

Nevertheless, larger countries often fall far short of the islands’ goals. Their efforts, for instance, were dealt a major blow when Mr. Trump announced in 2017 that the US would exit the Paris Agreement.

Besides carbon-emission rules, COP25 delegates this year are also reviewing the 2013 Warsaw International Mechanism on Loss and Damage, which guides how developed countries help pay for climate-change-related damage in developing countries.

Mr. Simmons, the Bahamas negotiator, said these talks are crucial for his country and others in the path of hurricanes.

“One of the things we try to do is get financing, because when you look at loss and damage, that goes beyond adaptation,” he said, adding, “The latest estimate put on the damage for Hurricane Dorian was about $3.5 billion. That’s a lot of money to cover what we are losing.… You can at least give us a little more assistance. It wouldn’t be able to restore us, but give us a little more help.”

Meanwhile, even islands that are most affected by such impacts often struggle to take the needed action at home. In Haiti, the poorest country in the Western Hemisphere, about 40 percent of the population is illiterate, and many people don’t understand climate change, Mr. Fénelon said during the Friday panel.

“They have different problems,” he explained, adding, “Some, they are like, ‘How can we talk about climate change when you are fighting for food, when you are trying to eat every day like we are?’”

“We tried to make a raising-awareness campaign in the public school, but we had to stop it because we lacked the support of the government,” he said. “And it is sad to realize that we only get support from NGOs and international organizations.”

Genevieve Glatsky and Omaya Sosa Pascual contributed to this report.

One response to “Midway Through COP25, Small Islands Lash Out”